Life has taken a turn for the crazy the last few weeks. After coming back from Maine, I was in VT with Ed, having a nice little weekend away from it all, when we got rear-ended. By a Stratton snowboarder, good thing she wasn't a nordie, I would have been upset. We were having a relaxing Sunday, and decided to drive over the hill to Manchester to go to the bookstore, and spend the rest of the afternoon reading books on the porch. But driving along, someone is tailgating, so Ed pulls to the side, to let them go around, because clearly they want to go faster. Instead, she drives into us. WTF. We sort things out, file a police report, my car is driveable, so off we go.

Of course, I'd been planning to spend the beginning part of the following week down in Connecticut, with my friend Becky, training on the good orienteering maps down there. Ed offered that I take his truck down, and he would limp back to Boston in my car. Really, I should have just not gone to CT, but what the hell, I'd already decided to take the time off from work, feeling that I deserved it after my work trip to Maine. I made it to CT, but I really don't enjoy driving Ed's truck, so that was unpleasant. The training was great, though, and I felt all ready for team trials by the time I came back on Thursday, which was the day I was setting the park-O, that had all of 15 runners. Woo. That was a stressful day, but that's a different story. Anyway, all this meant that I waited a while before starting the whole deal of talking to my insurance. 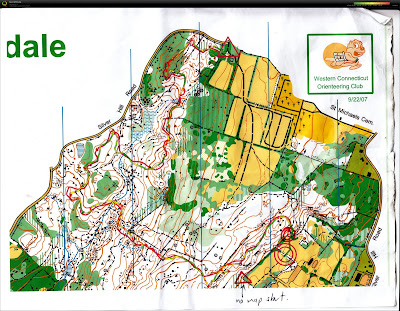 That weekend was team trials, so I put the car out of my head, and went and raced. Things went well. I'm going to France. I came back to Boston, and tried to catch up on life and work, somewhat unsuccessfully. By the end of the week, I'd finally talked to both insurance companies, gotten my car appraised, gotten it into the shop, and gotten myself into a rental. Woo, normal life may now resume. That only took one sentence, but it took HOURS. Why is insurance so difficult to deal with? I headed back to Amherst for work on Monday, in the rental car, and got a call from the shop saying that all is well, parts have been ordered, and my car should be fixed by Friday. Yippee!!

So then Wednesday, I get another call, this time from my insurance claims person. Apparently, there was supplemental damage, and they're declaring my car a total loss. Wow, way to mess with my emotions, Arbella. I try (unsuccessfully, still), to get a copy of the supplemental damage appraisal. I call the shop. I want to know what changed, and if my car can be fixed with pieces off another car, from a junkyard, for less than the cost of new stuff. Turns out that's totally doable. I want to do that. It's my car, it's basically driveable, it's a unibody frame, so totally fixable. At the same time, I start looking around for other cars. Trying to convince my insurance that what they want to offer me for my car isn't enough to by an equivalent car. They just say, hey, tough luck, you don't have a replacement policy. Sigh.

Fast forward a bit. I've been on the phone with some variation of a car insurer for a minimum of an hour every day for a week. The end result is that obtaining a salvage title is a complete and total pain in the ass, involving over six weeks of waiting time, and there is no way to get around that. I give up. Hopefully, somebody else will take this poor little salvaged honda and make it driveable again, but I don't have the time or patience. I never even got to tell it goodbye =(

So today I bought a car, from a girl. It's an '03 Civic. It's name is Chloe. Naturally actually buying the car was no small deal, it's somewhat of a hassle, but now it's mine. Deep sigh. Hopefully life will get less crazy now.
Posted by Alex at 8:10 PM

Having a car can make life easier. There are cars right now that are more affordable and easier to maintain. Congratulations, btw. The hassles are definitely worth it!