Despite the complete lack of snow everywhere in New England except Presque Isle, Craftsbury managed to pull off an impeccable 1.5km loop of manmade snow, to host 500 racers in the first round of Eastern Cup races this winter. The format was a 1km sprint qualifier-only in the morning, a 3km classic prologue (why does the prologue come second? Can someone answer that for me?) in the afternoon, and a 5km/10km skate race on Sunday. Most of the CSU juniors elected to only do one of the classic races, since none of us have been on snow since that freak Halloween snowstorm, and two classic sprint races in one day, when you haven't done it yet that year, is a recipe for injury. Luckily, yours truly doesn't abide by this silly "common sense" thing, and signed up for the entire weekend.
Did you know, if you do two classic sprint races in one day when it's your first day classic skiing, you'll be in a lot of pain the next day?? Who would have guessed it. At least I was able to provide amusement for the other coaches when my hamstring and groin cramped up completely and I was shaking and crying and clutching my leg and trying not to scream, Saturday evening. Good times. 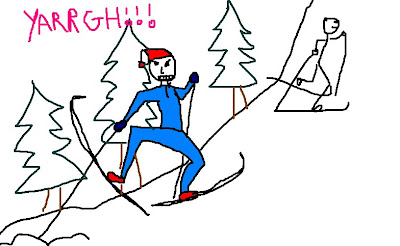 So confused by those long slide-y things attached to my feet!
The course was pretty fun - it had three hills, of varying degrees of steepness, the worst being the wall in the field that everyone was herringboning up. I think that's where the groin cramp originated, because you sure don't practice herringboning on rollerskis. Lots of twists and turns and good transition-y stuff, I like that sort of course. With about 30 kids racing, we were ironing out some new ideas and techniques for the EC weekends, the most successful of which was the parental waxing army. Rob and Jamie and I tested wax, told the parental army what to apply, and they whipped through the kids' skis, producing some fast, sticky, rockets.
It was a bit of a pain to not be able to warm up on skis, since the only snow at Craftsbury was being used on the course, and that was closed as soon as the races started, but by Sunday I'd figured out how to manage. Saturday's first race I started almost completely cold, and my body really doesn't deal well with that. I also could have used much stickier skis, but was applying some panic wax for one of my skiers during the time I could have been panic waxing my own skis. End result were some slick skis, but at least they were fast. Sprint courses are just over so quickly, I never felt like I really found my stride, and barely remember any of the course. The post-race hack indicates I took it at race pace, luckily.
A brief break, and then it was time for the prologue. Things were pretty relaxed in the CSU waxing area, since we'd nailed the wax (that toko base green binder stuff works like magic in manmade snow), and although I wasn't much more warmed up, I was at least a bit tired out starting the second race. My upper body was tired from my four minutes of race pace double poling earlier in the day, which goes to show my dismal ski shape, but I added a bunch more wax to my skis, and this time felt way more comfortable with the whole kick and glide thing. We got to do two laps instead of one, and that helped me, I think, although herringboning the steep hill still felt awkward.
I'm pleased with the second race, and kind of just disregarding the first race completely; not much to learn from that in my case. My juniors crushed the world, taking first place in J1 girls, J2 girls, and J1 boys in the morning - I was proud of all of them, especially with how supportive they were of the kids who weren't so happy about their races. The team aspect is really what ski racing is about - results are so secondary.
Sunday morning, I was hacking up a lung and could barely walk for sore hip flexors, but I actually did enough warmup to shake things out; finally getting the hang of how this ski racing thing works. Given that skate skiing is a lot easier to transition to from rollerskis, I felt ready to hammer the race. My skis were rockets, and that just makes everything more fun. The uphills were already getting pretty chopped up, so I tried to stay light on my feet and just keep the skis moving, and this was definitely the right technique up the steep hill in the field. On the flats, I didn't feel super solid on my feet, but smooth enough to keep generating speed, and my skis continued to be really speedy.
The second lap I tried to maintain that calm feeling I'd had the first lap, and while transitions still felt a little shaky, I was definitely hitting my groove on the uphills. Coming through the lap I was starting to get fatigued, but my top J2 girl caught me just then, on her second lap, and I hopped in behind, to catch a ride. She still skis like a J2, but boy does that kid have some power. The steep hill felt a lot harder the third time 'round, but knowing that you're almost done is always motivational, and I finished pretty strong, basically not having passed or been passed the entire race.
I was happiest with the skate race - only 4% behind Sophie Caldwell is a good race, and although the points aren't out yet, I think it shows some good early ski fitness. I placed 27th, which basically just shows the depth of the New England women's field. Stacked. A few years ago, 4% behind the winner would be top-10 placing.
I'm kind of psyched about ski racing now. Not so much that I'm going to rush out and buy a USSA license to race at nationals, but enough that I've stopped doubting myself. Time to get on snow, somewhere... re-learn how to classic ski!
Posted by Alex at 3:54 PM