So, after thanksgiving, Ed and I headed west, and a whole lot south, to Cincinnati.  There were two very good reasons for this trip - first, his sister and her partner live out there, and second, the US orienteering night, relay, and ultralong championships were being held by Orienteering Cincinnati (OCIN).  Have I ever mentioned how Orienteering USA has waaaaay too many championship events? It's a little ridiculous.  Anyway, here was yet another weekend of championship events, and I figured I could basically finishing writing my thesis while on the road.  No biggie.

We got to Cincinnati on Thursday night, and it was really fun to have all of Friday to hang out with the girls and their dogs.  They're up to four dogs of their own, and one of the renters in their house has another one, so that makes five dogs.  That's a lot. 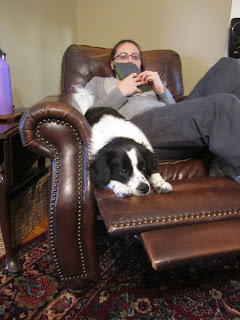 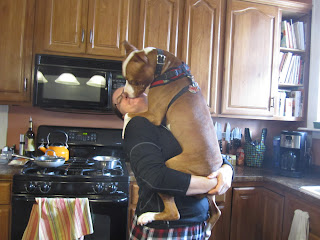 Ginger the lap dog.  Ginger made a great running partner.

The first race of the weekend was the night-o.  I love night-os, and I did have a good time on this one, but didn't feel very speedy.  The hills were killing me, and there were lots of hills.  Luckily it was a clean race, though I lost about a minute on one of the route choice legs, sort of bumbling around for a while before fulling committing myself to my route.  Oh well, happens.  That minute sure wouldn't have made up the 8 minutes that Ali beat me by.  I still managed to take 2nd place for F21, beating out Iliana, the Bulgarian living here for a while, and beating all the men on my course except one, and he's a crafty old goat.

The next race was the relay champs.  CSU had 14 runners, and there were teams of four, so two people didn't get to race on a CSU relay, so formed an impromptu relay under the name "Water Dragon".  I have no idea where that name came from.  The way orienteering relays work in this country is that you are assigned a point value, give your oldness, juniorness, or femaleness.  There are three categories of relays - 4, 8, and 12 points.  You need enough people of points to fit into one of these categories, and males younger than 35yo are worth zero points, so that means you need to wisely divide your women, children, and elderly folks. 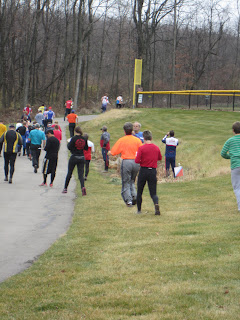 Start of the relay 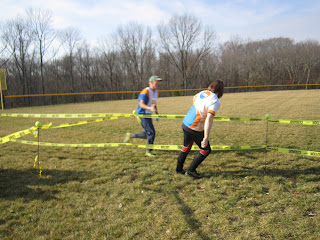 Ken tagging off to Ed - they were on the eight-point team, consisting of Barb Bryant, Anna Skafer-Shelton, Ed, and Ken. 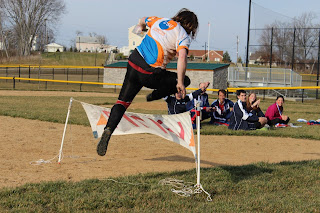 So, it turns out Ed is very susceptible to peer pressure.  He was coming across the baseball field to the finish and we were all gathered there waiting for teams to finish, and of course the suggestion was yelled out that he should jump the fence.  And he did.  Then we yelled out that he should jump the other fence (completely unnecessary, as the control could have been reached by a 2-foot detour around the fence).  But he jumped that one, too.  So then we asked him to jump the finish banner, and he did that, too.  Thanks Ed!  Good thing there weren't any other teams nearby... 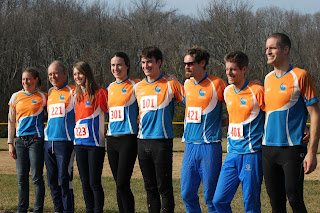 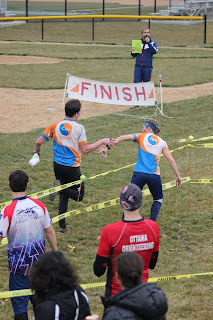 Ian tagging off to me as second leg of the relay 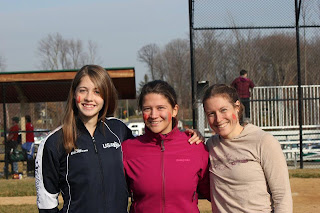 CSU ladies - we had had facepaint, but the blue didn't last after being sweated on.

After an excellent dinner of Indian food, we had a team social meet-and-greet thing at the central hotel, where people could come meet the senior team, talk to us, see photos, listen to stories, and hopefully give us money.  We raised some money, and hopefully some awareness, so that was good.

Then it was Sunday, and time for the ultralong.  The women's course was 14.5km straight-line distance, with 530m of climb.  That doesn't sound like that far, except that orienteering tends to take you further than the straight-line distance, and there is lots of up and down on soft slippery surfaces.  So, this would be tough.  On the start line, it began to rain, buckets of water, and I was incredibly thankful that I don't wear glasses.  This was a mass start race, and I was looking around for Ali, but it turns out she didn't start, so as to not prolong an already-lingering cold.  So, I figured I'd try to run with Greg Balter and Vadim Masalkov, two very speedy M50s that I tend to finish near, or just behind, on shorter races.

Off we went, and the first loop of controls was really fun.  The terrain was interesting, with some slippery side slopes but nothing so steep that you couldn't climb into or out of gullies.  Apparently, this part of Ohio is dead flat, punctuated by very steep gullies, that happen to get INCREDIBLY slippery when it's pouring rain.  I noted the lightning around control 5, but figured it was far enough away that I wouldn't bother worrying about it yet.

Our first long route choice was from control 6-7, and I didn't make a great decision, and then didn't execute it so well, and this separated me from Balter and Vadim and Iliana, who all got ahead of me by 2min or so on that leg.  Boo.  But I caught back up to a Canadian M50 around control 7, and we were racing head to head for the next fun loop of controls.  More gullies and slip sliding around and thankfully not sliding too far down into any of the gullies that I didn't want to slide into.  After that, there were some flat legs, and I dropped Andrei, and ran alone for a long time.

On the way to 17, I lost contact with the map, and no longer knew where I was.  I also realized that I'd tied my shoes too loosely, or they'd loosened up in the rain, and they'd been this way for a while, long enough for me to lightly roll my ankle a few times and jam my foot against a branch once or twice.  I told myself I would retie my shoes at #17, but I should have just stopped when I realized it was a problem, as my feet were quickly becoming the weak point in my race.  So, now I was lost, in the rain, with painful ankles and I still didn't retie my shoes.  I was wandering around a deep gully attempting to figure out what was going on, when I saw Ed on the other side of the gully.  "Ed!  Where the f*** am I?!?!?"  We proceeded to have a great discussion, shouting at each other from either side of the gully, as to where I was.

Eventually what he was saying began to make sense, and I realized where I had to go. Turns out, it was the same control that Ed had to go to.  I started over there, and ran into some super thick, nasty, scratchy brambles.  I had to get to the other side of them, and just stormed through, but it really hurt.  Then I got to the control, and I couldn't get my shoes untied to retie them.  So when Ed got to the control, I was a bloody, whimpering wreck, basically throwing a temper tantrum because I couldn't get my shoe untied.  Thankfully, Ed took charge of the situation and gave me a hug, laughing at the fact that we were out racing in a thunderstorm wading up and down muddy ravines and occasionally crashing through bramble patches.  One more hug for good luck, and then we went our separate ways, and I was in a way better place mentally and emotionally than I'd been five minutes before.

Unfortunately, I couldn't get back the fire after my little temper tantrum, and slowed way down on the last loop before coming in to the finish.  I had seen Balter and Vadim and co. all heading back toward me, basically 10-15min ahead, as I headed out on the last loop, and that's just plain disheartening.  But, I slogged through to the finish, and given that it was a race of attrition, I won it.  Woo! 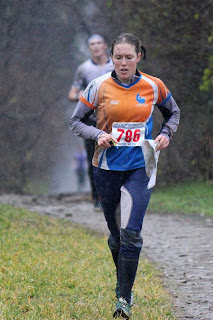 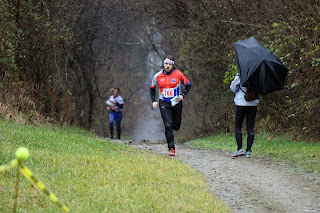