After the Craftsbury ski-o, I headed west, to Rochester for Christmas.  A whirlwind visit, and then I was on the road again, north and east to Mont Sainte Anne in Quebec.  CSU does a training camp there between Christmas and New Year's every year, and though a large number of our team was out in Soldier Hollow for nationals this year, I wasn't going to miss Mont Sainte Anne.

The skiing in Quebec was fabulous, lots and lots of snow (so much so that they opened both trail 23 and trail 38, which according to the locals are NEVER open this early in the season!), and cold temperatures to keep the snow perfect.  I skied myself into oblivion, despite coming down with a cold on day 2.  In most situations, I would stay home with a morning heartrate as high as this one got, but the skiing was too good to miss, not to mention that when I was out skiing, I felt a whole lot better than when I was indoors, thanks to copious snot rockets.  Thankfully, the cold abated within a few days of ceasing the endless skiing, and by this last weekend, I felt ready to try a race. The Bogburn happened to be on, a scant hour's drive north of where we stay in VT when we have free time, so I figured I'd give it a whirl and see what happened. 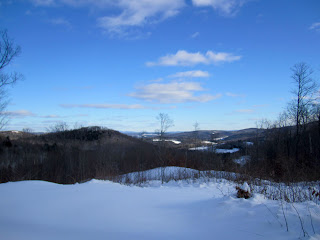 The weather was utterly perfect for ski racing - bluebird skies, upper 20s to lower 30s air temp, and beautiful soft snow.  I had planned to race on extra blue, but things warmed up enough that VR50 ended up working nicely for me.  Thanks to John for lending me some panic wax - I would have been unhappy on my blue! 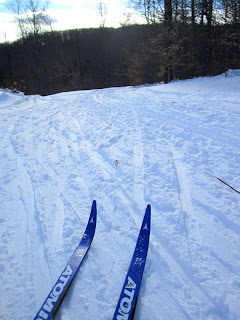 These old skis are still kicking and gliding for me, so I keep racing on them.  A good ski is a good ski, regardless of how old it gets.

So, with a nice late start of 12:30pm, I figured I'd do my waxing in the morning, at the lower cabin in Weston.  I discovered that there is an entire drawer of ski waxes in the basement!  I think I was probably smart to use my own wax and not risk using the decades-old swix klister, but I couldn't help but be excited looking at this treasure trove of defunct waxes. 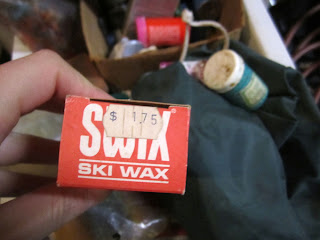 When did swix klisters cost $1.75?  Now they're $16.99!  This one was unopened, but I did find one exploded tube contaminating an entire bag of goo... 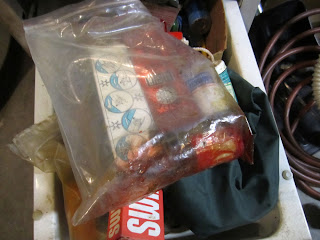 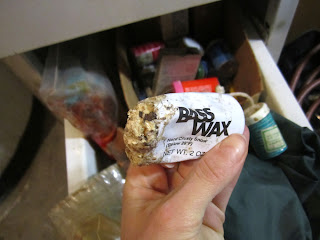 And how about this base wax - I guess a sort of binder?  Looks like a science experiment gone terribly, terribly, wrong. 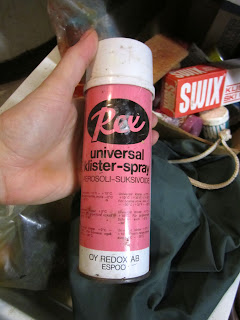 Rex spray klister, doing spray klister way before Toko ever made their current stuff!  Maybe I'll try this one, someday...

Anyway, ski waxing aside, I made it to the race with enough time to test my wax, and take a tour of the course.  This is a good course to have done before, because it's pretty technical, lots of winding uphills and downhills, gotta work the transitions and stay on your feet in the soft snow.  I'd drawn bib 19, and had a gazillion ghosts ahead of me, so I knew I'd have a fairly lonely race on this one-lap course.  That's a good thing when the trail's only wide enough for a single track! 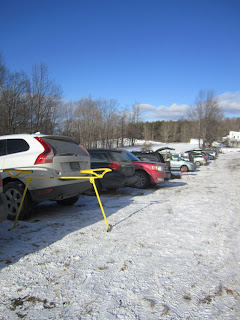 You know it's a ski race when every car in the parking lot has a waxbench behind the car!

I started out conservatively, not sure how my body would react to the first intensity I've done since mid December.  The race starts with some climbing, and then you get the tricky downhill corner where I totally bit it, skis getting pulled into the wrong rut, and thankfully my face hit the snow before the full split had been accomplished.  That still wrenched my groin muscle pretty bad, but it was more embarrassing than anything else, since I tend to pride myself on being pretty good on the downhills.  D'oh.  Then some more twisting and turning, and because of the fall, I was feeling more cautious than usual.  Eventually I settled into a bit of a rhythm, trying to just ride my skis and not waste effort in flailing.  The snow was soft, and poles weren't much of a help, so I was glad that I'd gone for the last-minute panic wax.

As I started climbing the first relentless hill, I began to notice how short of breath I was feeling.  I knew that Frank and John were warming up somewhere behind me, and I was worried that they'd see me if I walked the herringbone parts, so that kept me going, but I did not feel fit waddling my way up the hill.  Then things flattened out again for a bit, and I had some moments of pure bliss, just striding along in the sunshine through the Vermont forest and enjoying the feeling of classic skiing.  This is my favorite thing ever!  Then the hill kicked up a notch in steepness, and I had to pay a bit more attention to the task at hand, and haul my wheezing carcass over the crest.

A nice long recovery bit comes next, and that was great, but then you start the final climbs into the finish.  Coming out into the open field with the view, the sunshine nearly blinded me, and I was getting tired, being unable to breathe like I wanted to.  At least there was no phlegm rattling in my throat, that was a big improvement.  As I came through the field, I passed Andy, who was doing his warmup, and he dogged me all the way into the finish, cheering me on the uphills, which is pretty much all that kept me running on the steep ones.  Hopefully my lung capacity comes back soon, I'm not a huge fan of sounding like a fat kid with asthma at a pace like I was going - for that much effort, I'd like more speed, please!  I finally got to the finish, and watched Kathy finish next from 3min back, knowing I just got beat in the coaches competition.  Luckily I sneaked in just ahead of Maddy, so took silver today!  Results.

After the race, Kathy and I had a great ski around the course again, and then later took some of our J2s around too, because those trails are fantastic.  What a perfect day for skiing!  Definitely worth the drive. 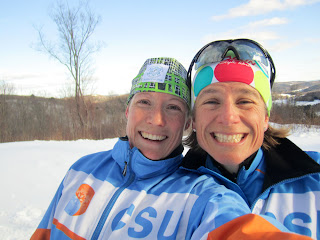