I have been doing more running this summer than in past years, in part because I was feeling a bit burned by orienteering after Worlds, and I just wanted to put one foot in front of the other.  Running seemed like fun, so I kept doing it.  And then I did a race, and that was fun, so I looked for more races, and did those, and they kept getting longer and longer, through no fault of my own, and somehow, that's how I found myself on the start line of the Pisgah 50k.  I've never done an ultramarathon before, heck, I've never done a marathon before, and to date I think my longest run was probably the 18 miles I did two weeks ago on the Wapack.  I really don't know why I thought it would be a good idea to run this race, but the week before, I started telling people I was going to do it, and at that point, well, you don't have much choice if you give a hoot about your pride.

So, the alarm went off at some ungodly hour, I piled a bunch of gels and shoes and stuff into a bag, and drove to the southwest corner of NH, at the Pisgah State Forest.  Paid some money, got a bib, promptly forgot bib in car, created a duct tape handle on a waterbottle, stuffed some gels down my bra, double knotted my Inov-8 shoes and stood on the start line with about 200 other crazy folk.  The weather was gorgeous, cool and sunny and dry, and I was actually pretty excited to spend the next few hours running.

I ran into Kelsey Allen within a mile or two, last year's winner and general mountain woman of awesomeness.  We started chatting, and discovered that both of us wanted to enjoy the day and not suffer too badly until the end, so we chilled out as we cruised down a trail covered in pine needles, winding its way along some high-elevation marshes.  This part was cool, because you kept passing these linear marshes, that really gave a sense of *going* somewhere.  Eventually we hit the first aid station, at 8.1mi, and we were right on target for a 5h finish.  I know this, because I spent some time in the car writing down the splits for a 5h finish on the back of a trail map with the race course highlighted, that I was carrying along for entertainment.  Surprise, I'm an orienteering nerd.

We also got a split that the lady in first was 6 minutes ahead of us.  This is a lot of time, when you've only gone 8 miles.  But, neither Kelsey nor I felt like changing anything about our pacing, so we just kept on keeping on, hiking the steeper uphills and dancing the downhills.  Apparently we were better at the downhills than the leading lady, because we made contact just after the second aid station, around 14mi or 15mi.  Kelsey had picked up the pace a bit at this point, and I forced myself to keep up, even though it felt harder than I necessarily wanted to go.  I figured I just had to keep up until about 20mi, and hopefully we would have put enough space between us and this other woman that I'd hang on to 2nd.  But the trail kept being beautiful, and after the aid station at 17mi, we climbed up Pisgah Mt, which was also covered in mature hemlocks and had some bare granite slabs on top with blueberries (but no fruit, bummer), and some great views of Monadnock.  And then a ripper downhill!  I should mention that Kelsey and I are probably some of the best downhill runners on the circuit these days, especially when we're pushing each other down something rocky and technical.

We picked off a few more men, and then cruised into the aid station at 20mi, ready for a loop around Kilburn Pond.  This involved another technical downhill, with more rocks and more loose rocks, and I was definitely getting tired.  My hamstrings and my butt could tell I'd been cruising the downhills, and they were like, duuuude, you haven't trained us, can you please just stop??  Eventually we hit a bridge and turned back uphill, and Kelsey was running and I knew I couldn't, so I backed off and told her I'd see her at the finish.  I kept moving, letting the hips swing and the feet dance, but the intensity was a notch lower and this felt more comfortable.  The trail climbed for a few miles, back toward the aid station, and as we approached the aid I saw Kelsey's white singlet through the trees.  I'd made contact by the time we hit it, and she was hitting a rough patch, getting hungry and tired.

We left the aid at 25.4mi together, but on the next downhill I pulled away, and as I started climbing up Dave's hill or something like that, I knew this was it, 10km left and they might not be pretty, but I had to keep the pace up, so Kelsey didn't catch me once the food she'd just consumed started working for her.  I was still right on pace for a 5h finish, but only if I kept running 6min/km, and this jogging pace felt a lot harder than I had hoped.  I pulled in another guy or two, and then we started a long downhill slog on newly-logged logging roads, that were muddy and steep, and my legs were pretty done.  I kept expecting to see the aid station at 28.6mi, but apparently that wasn't there, because the road was washed out to get to it, so that was playing mind games with myself.  45min and I haven't gone 3mi yet? uh oh!

I finally exited the logging area and hit a real road, where there was a truck with gallons of gatorade and water and two racers sitting on the ground guzzling that gatorade (I was so glad not to be in that position, of a hardcore bonk only 2 miles from the finish!).  Keep plugging, keep plugging, only a mile or two of road and then I can sit down!  One little bitch of a hill, but eventually I came to an intersection and saw a finish chute to my right.  Wooo!  I staggered down the chute barely under 5h, in 4:59:38.  That was cutting it a little close.  But, I had won, so that was pretty darn awesome.  Kelsey came in maybe 10min later, with a smile on her face, so I knew it had been a good day despite the bonk.  The weather made this a fantastic day for a run, and the trails were beautiful and soft; I couldn't have asked for a better venue to run 50 km.  The aid stations were well-stocked and manned by friendly folk, course was well marked, and overall, this was a top notch production of a race.  Thanks to all who made it happen!

I won a basket o' goodies and a pie!  This photo amuses me, because the guy who won looks like a runner, while I sort of look like a miniature skier pretending to be a runner =) 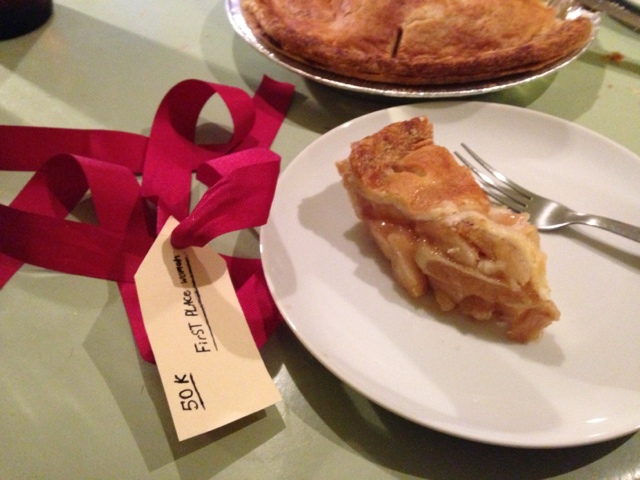 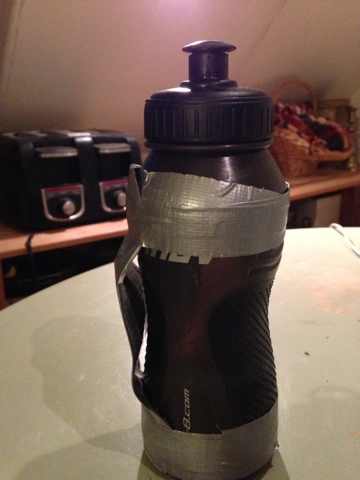 This was my impromptu water bottle carrier.  Easier than a thing around my waist, messing with my stomach.  It worked well, and I even designed a little pocket in there! 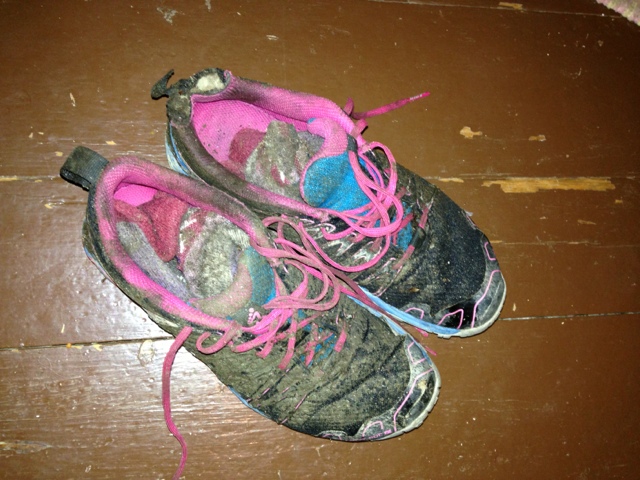 The TrailRoc236 shoes done me good.  Lots of mud, but they had fantastic grip on the mud, the rocks, the roots, and the bridges, while fitting beautifully and feeling comfortable.  A fine mesh on the front meant that after running through mud puddles, the water drained out very quickly, and none of the mud went in.  Though my socks were fantastically muddy from when I had gone in over my ankles.
Posted by Alex at 8:15 AM

Damn, Alex, what a run! Favorite parts: the jury-rigged carry bottle (surely better than anything on the market), the linear marshes description (totally agree), and Dave's Hill (I'll never say Davis again). Now just imagine how fast you could do this race with less mud, more training miles, and all this experiential knowledge of the course... look out women's record in 2014 =)

Motivational Alex! Almost makes me want to get into running. I'm sore from 30mins I can't fathom running for 5hrs straight- very cool. You going back to the Birkie this year? See you at Weston!