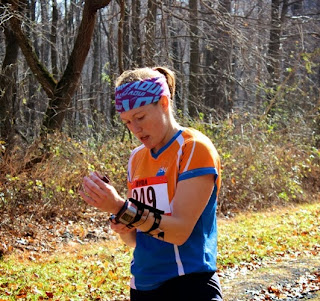 After a lot of travel weekends lately, I wasn't too psyched about another long drive, this time down to French Creek State Park, west of Philly.  But, the Delaware Valley Orienteering Association held a top-notch meet, that was well worth the drive (which was great in its own right, carpooling with Katia, Giovanni, Anne, and Zan).  My experience running down there is limited, and there are many fewer features than I'm used to on the map, leading to a much higher dependence on direction and distance to get to your control - the boy scout approach.  I was very happy to find most of the leaves on the ground rather than on the trees, as it meant visibility was quite good, making the orienteering considerably easier. 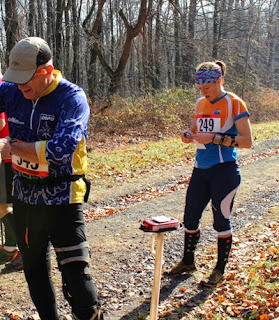 Standing in line for the start.

The format of the weekend was two classic-distance races, and a combined time for the overall winner.  I didn't bother to really taper, and just hoped to hold it together for both races, despite still feeling some fatigue from the 25k Raid the Hammer race last Sunday.  Saturday's race was at a southern portion of French Creek, with some hills, but in a flat, vague sort of way.  I treated the navigation quite cautiously, and never got moving very fast during the race, though I was certainly working hard up the hills.  The footing was rough - loose stones and thick vegetation - and I didn't feel particularly stable on my feet. I also took a stick to the eye somewhere around control 4, which didn't do much for my confidence moving through terrain.  But the cautious approach worked out, and although I dropped about 2 minutes on the course because of mistakes, I came out on top of the pile of elite women, with a scant 3min lead over Kseniya.  There were quite a few M45 and M20 runners who beat me, though (we're on the same course), indicating I should probably move a bit faster the next day. Splits (includes all the men on the red course, too). 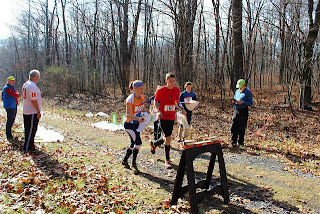 DVOA had set up a wine tasting event at a local winery, so many of us took advantage of that opportunity, which was a very nice touch to the event.  The official dinner was in downtown Pottstown, and after dinner, the Senior Standing Team members ran a public course review, going through some of the courses offered today and discussing the various best ways to approach different legs.  For the most part, I thought this was a really good idea, and folks seemed to get something out of it.

Day 2
My goal for day 2 was to carry over the good navigational habits from day 1, but run a little more aggressively, especially where the vegetation was thick and rocky.  Everybody has to deal with tough terrain, I just gotta move through it faster.  Unfortunately, warming up I twisted my ankle kind of badly.  This ankle has been twisted enough that the ligaments are already all stretched out and the pain stops quickly, but it did leave me feeling very unstable on my feet for the race.  As is often the case, the footing is much better off trail than on the trails when there are loose rocks under leaves.

I tried to start aggressively, but somehow was still losing some serious time to both Tereza (member of the Czech Republic team who is here studying at Elon University) and to the M45s.  I started to take the time back by #4, and the flat trail cruise to #5 felt good, and I was moving well.  I could tell I was running too fast, because I really wanted to stop running and sit down, but the trouble with orienteering is that the race plays itself out one control at a time, so it can be very difficult to pace yourself well.  By the time I was climbing up the hill to 7, I knew I was in trouble, physically, and had to back off the pace a little. I made contact with Kseniya at control 10, having made up a few minutes on her, and while this was a relief, I knew I had to keep pushing the pace.  I was deathly slow up the hills to 13 and 14, just unable to move any faster, and lost two minutes to Tereza between control 11 and 15.  Darn!  Splits from day 2. Luckily, the overall time was enough to net me the win!  I was pretty psyched about this.