The second Eastern Cup of the season was at Black Mountain, in Rumford ME.  I love the course at Rumford, it really rewards good skiing and good fitness, and I was finally feeling like I had some of the latter at my disposal. It had been a busy last two weeks, so I definitely went into the race with moderated expectations regarding energy levels, but I figured if the Tuesday race was any indication, I would have some oomph at my disposal. 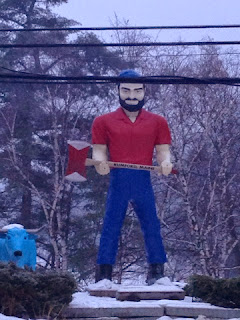 Paul Bunyon had some oomph at his disposal. Guarding the entrance to Rumford, as ever.

Saturday dawned -8F and mega windy, a constant roar with occasional gusts rolling off the mountain and chilling me to the bone. We were testing skis in full down parkas, and I may have been double puffed.  It was beautifully sunny, but the wind and cold temperatures made it hard for me to get into race mode. Luckily, I borrowed a wind vest from Rob, and despite the size being a little off (he’s only a foot taller than me, obviously we can share clothing), it was a good move, as my core stayed warm enough to deal with the cold.  Being a coach and a racer definitely brings more fatigue to the party, since you can’t just focus on yourself to have your best race ever, but I’ve either developed the tolerance or the endurance or just somehow thrive on this sort of stuff; I felt peppy despite a solid 25k of ski testing and course tours prior to my race. My goal for the race was to attack the transition-filled downhills, and then keep the tempo high on the climbs, especially considering the cold and squeaky attributes of today’s snow.  I had a decent start spot, behind most of the college racers (this was the Bates carnival, an open carnival), but up with some of the big guns who race professionally, because I still have some points from last year. 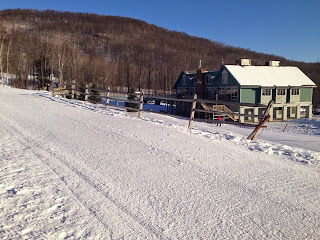 Out of the gun I felt nice and relaxed, snappy but smooth, and my skis were running really well.  Just the straight cold factory grind from Madshus, with our extra special CSU love from the wax army.  I focused on treating the first 2.5k of downhill like a sprint, nailing the transitions and keeping the ticking clock in mind, and near the bottom I could tell that my 15-second girl, Kaitlin Miller from Craftsbury, was getting closer.  She’s a professional ski racer, so this was cool, but I figured I wouldn't be seeing her any more once we started climbing, and I was right.  The first downhill bit of that course is so much fun! The snow was great, loose enough to get an edge but fast enough to really fly, and i was having fun as I confidently rode my rockets. It’s a good feeling.

Around halfway through, the climbing starts, first with a more gradual V1 hill, and then a wall, smack in the face. I tried not to go nuts on the gradual climb, flowing my way into it, and then up over the wall I tried to up the tempo, keeping things light and quick and forward. Channel your inner Liz Stephen!  A friend was cheering near the top, which was helpful, and I tried to keep some power through the V2 section preceding Highschool hill. That’s an obnoxious uphill section before Highschool Hill, while the hill itself is really not that bad - sure, it’s big, but it’s over with all at once, and it’s steep enough you can just put your head down and hurt for a few minutes and then you can go downhill again.  I caught my ex-skier Zoe up the hill, and that helped with my confidence, so I tried to keep the tempo high and the feet sliding, and despite far more fatigue in my arms and legs than I wanted, I gasped my way over the top in a respectable manner.

From there the hard parts aren't even done yet, because you really oughta V2 the next climb, and that’s just so hard when you’re all exhausted from the previous climbs, but I knew that the seconds were worth it, and I managed to actually recover somewhat on the descent from Highschool hill, so I attacked the remainder of the course with what little energy I had left.  It was definitely a nice feeling to feel like I finally have some power to my skiing, especially for those gradual uphills.  It was enough to finish 23rd, which, with all the big guns in town and in an open college race, is quite respectable.  I was definitely helped by being on very fast skis and a course that suited me, and best of all, I could feel my fingers again by the time I finished. Score!

Sunday was a classic sprint, and I know better than to sign up for these. They’re both crazy in terms of the general wax chaos, and I suck at them, so no reason to waste my money on something where I won’t really have fun.  We got caught a little behind when the weather went crazy and started ice storming, but our kids pulled through with grit and guts, even though their skis didn't really work. Don't worry, the analytic heads on our wax team are already figuring out what went wrong and how to fix it for next time.  Of course, said ice storm gave a little perspective to my day, as we went from "hmm, tricky waxing day, eh?" to "oh shit, I can't drive this car because the roads are a sheet of ice".  Luckily, we all made it home alive. 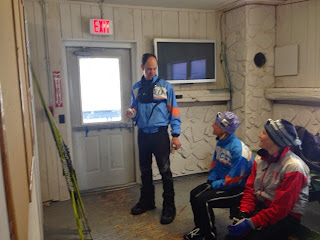 Rob attempted to teach us a lesson in waxing. Something about Toko wax. We just complained about the stupid Xcelerator bindings being impossible to get into. At which point Rob reminded us that he could easily switch the rolls and leave us in the waxroom while he tested, so we shut up and got on with skiing. Look at those attentive students in the wax class!
Posted by Alex at 10:42 AM