Another year, another West Point meet come and gone. I feel like this one is usually one of the first of the season, with the leaves barely coming out and the first warm days starting to appear, with a few investigative blackflies. This year, I've already been at two national ranking events, one international ranking event, and two major regional events before West Point meet came around. This just means the calendar started too early! Anyway, super nice weekend, great weather and always fun to see my whole extended orienteering family in one spot. Ed and I "camped" with the Italians in our club, Katia and Giovanni, who have a camper van, making these weekends so much more comfortable. 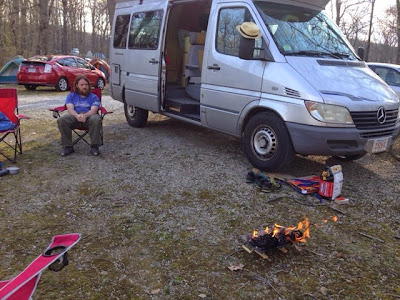 Yup, there's even a mini grill.

I signed up to race against the men, mostly because it was the longest course being offered. As I'm racing the long distance final this August in Scotland, I need to be prepared to bring full focus and full effort for 10.5km of hilly terrain, and it sounded like that's exactly what was on tap for the men's courses last weekend. It's also fun to race against Ed, even though he may not agree.

Day 1
The forest for the first day was relatively open, in terms of small trees obstructing your view, but it was FILLED with blueberry bushes. The sorts of blueberry bushes that are very well established, very woody, very high, and absolutely unrelenting to push through. When the blueberry comes up to mid-thigh, there is no possible way to pull my foot out from under there - I just end up swimming, wading, tripping, cursing my way through the forest. There are no sexy glamour shots when you can't even manage to open your stride on a downhill.  By the end, even walking through the blueberry felt like more effort than I could put forth. I nearly sat on a rock to await my fate, but somehow, probably thanks to the thought of cold watermelon at the finish, I kept going.

I started about four minutes behind Ed, and four minutes ahead of a Canadian named Hans who I thought I could maybe keep up with.  The first five controls were going well; I was struggling in the blueberry but adapting my technique and aiming for trails or rockfields (those suckers can't grow in a boulder field!) wherever possible, making slow but steady forward progress. Then I made a pretty bad parallel error on control 6, getting pushed by the vegetation and never recovering, and all in all just plain old getting lost.  About four minutes later I figured it out, but I was frustrated to lose that time, because if you already know you're slower than the guys you're racing, losing time from being lost is just stupid. Anyway, I still managed to catch Ed on my way to control 8, where he said something helpful like "what took YOU so long to catch up?". Jerkface.

So, I ran away from Ed, and I met Hans at control 9. We proceeded to have a good battle until 12, where he took a slightly better route around the mountain and gained enough time on me that the connection was snapped, and the energy drained out of me immediately.  There hadn't been any water yet, and I was an hour into the race on a hot day - this just meant I had no reserves of energy. Control 13 was a water stop, finally, on the highest point around - I punched the control and then sat down in the shade and basically had a picnic. Ate a gel, drank about eight cups of water, and looked at my route to 15. Check it out - how would you approach this? It didn't look pleasant, lots of cliffs and laurel. But it didn't occur to me that I could end my misery and just drop out, so I slogged along to 14, having spent nearly three minutes drinking water. 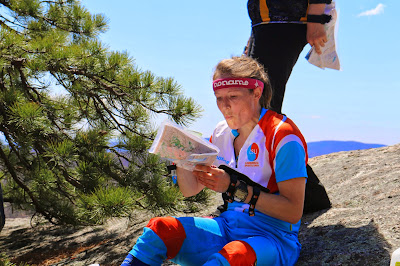 Yep, I'm going to sit here and drink water until I find the courage to keep going...

I fell into a pretty dark place on the way to 15. I wasn't enjoying myself, the vegetation was just beating me up, and it had become too much work to run for more than 20 strides at a time. I was spending too much time wandering aimlessly, not focused, not wanting to be there, and I think it may have been pure luck that I wandered in to 15 when I did. It didn't occur to me to drop out; had this thought crossed my mind I probably would have immediately acted upon it and bailed to the nearest trail. I slogged off toward 16, in totally the wrong direction, just letting the vegetation push me around and feeling sorry for myself. Eventually I realized that I couldn't just stand there on the rocky promontory forever - I had to go find this control if I wanted to keep going and find the rest of the controls, and if I didn't find the rest of the controls, I'd never get to the finish. And if I didn't get to the finish, I couldn't have any watermelon. So, may as well keep moving.

This mantra - just keep moving - got me through the rest of the course, and I picked up the pace back to something remotely respectable. I was still dehydrated and grumpy, but I was no longer wandering aimlessly in the mountain laurel waiting to be bitten by a rattlesnake. I managed to avoid any other big mistakes, but definitely wasn't feeling very proud of that run. Somehow, I wasn't last. 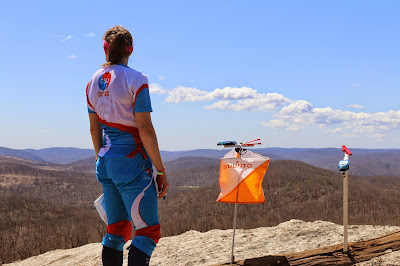 Thanks to John Hensley Williams for the photos.

Day 2
After my despondent attitude of day 1, my goal for day 2 was to RACE. I don't care if the terrain sucks, everybody else has to go through it, too, so suck it up and go faster. This was the right attitude, and I ended up finishing much higher in the results list, ahead of two of our guys on the US team and one guy on the Canadian Junior Team. Sucking it up and going faster has its merits.

The first five controls I took carefully, executing my attack plans pretty well, but hesitating more than I needed to. The forest was a little nicer today; less blueberry and more up-to-date vegetation mapping, so I was appreciating that I could actually move. On the way to 6 I actually saw a snake, probably a black rat snake? This left me thinking about how no matter how tired I am at the top of a hill, I'll always find the energy to jump in the air and yell "eee!" when there's a snake curled up on a rock I'm about to run across.  Maybe because of my snake-y contemplations, I missed control 6 by 20 seconds or so, and determined that I needed to be bringing more focus to this game.

Hans had started 2 minutes behind me again, and I saw him descending the cliffs to 7 when I looked back. Darn, that didn't last long. But now that the pressure was on, I started to run a little better, a little more confident and a little more aggressive. We had a very typical West-Point-descent to 8, followed by a typical West-Point-ascent to 9 (these involve many contour lines, at least a few cliffs, and not much navigation required).  I took a good route to 9, while Hans went around a different way, and I pulled ahead again, meeting Mark Adams, a teammate of Hans', at the control. I wasn't sure if I'd caught him or he'd caught me, but we were going head to head for quite a few controls, neither quite able to drop the other.

After another West-Point-ascent to 16, West-Point-descent to 17, and W-P-ascent to 18; those final hills were a bit gratuitous and I may have been cursing the course setter. I was definitely feeling all the fatigue, but I knew that everyone else would be tired at this point, too - must keep pushing! I managed to hold it together through the end, despite the hills and the heat and the snakes and the blueberry bushes, and took 7th place in the elite men's class, just three minutes out of 5th! Pretty pleased with that result, especially as there is still room to improve. 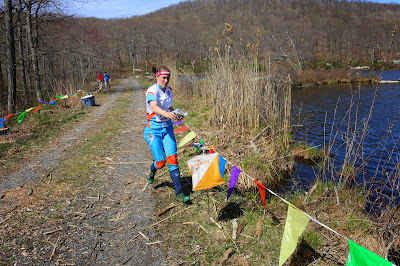