A while ago, Ed had this idea that we wanted to host a "sprint camp" event, basically four days of orienteering races and training and we'd make it awesome and simple to put on and people would come and enjoy themselves. I liked the "simple" part of this idea, but things are never as simple as you think they will be, when it comes to putting on events. But, this idea came to fruition, with a lot of help from Erin Schirm, the national junior team coach, and Becky Carlyle, as the course consultant. We didn't really get our advertising act together until three weeks before the event, at which point lots of people already had plans, and school was still in session thanks to all the snow days, so that cut into some of the local junior attendance, but we still managed to attract 35 runners from around the country (and a handful of Canadians), which isn't too terrible considering we were going to cap the event at 60 people.  Overall, everyone seemed to really enjoy themselves, and the weather totally cooperated, which makes it a lot easier to pull off a four-day event. 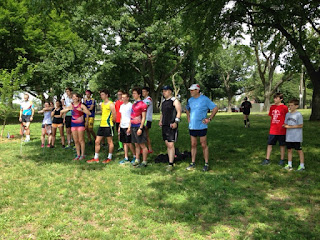 The original plan was for "simple", but somehow that ended up meaning we included lunch for everyone, custom-printed folders, two new maps, a nationally-sanctioned qualifier-final race, a distillery tour, a trip to the zoo, home-made pies for prizes, and a huge number of controls out in the woods.  I suppose simple is in the eye of the beholder, too. We had some last-minute permit issues, because what event organizer doesn't have those issues, and we had some last-minute sanctioning issues, but everything worked out. Yay! 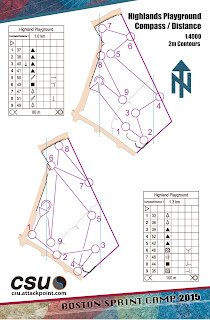 The first day also coincided with the final race of the 2015 Park Series, so we had a pretty big field in that race, at Edmands Park. Lots of fun little route choices over those glacially-formed hills, and Giovanni won the thing, taking home, well, sharing, a pretty tasty apple-berry pie, if I may say so myself.  Earlier in the day, the sprint camp participants had done some training down at Newton Highlands Playground, including the map shown below with no map on it. That one was devilishly difficult. 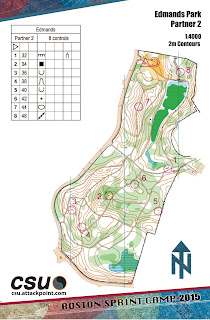 Friday was more precision map reading, this time in Magazine Beach park, and finished up with a race at Danehy Park, all in Cambridge. We had a sponsorship from Hubway, so some people rented bicycles to get around the city. On a nice day, not a bad thing to do! 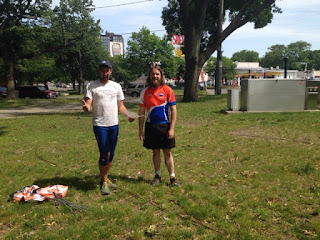 Erin and Ed, setting up all the trainings. 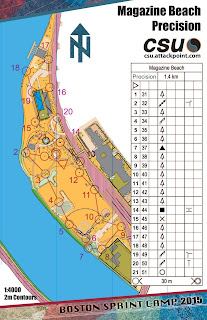 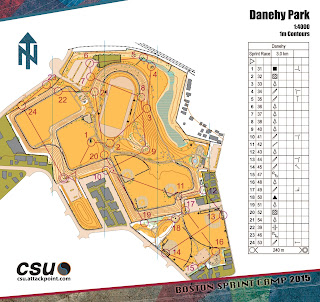 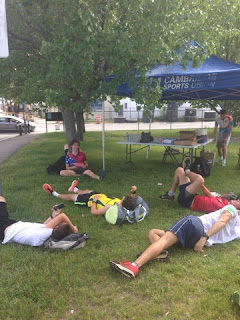 Apparently the junior team was pretty whipped after all this work. It was tough getting them going for the second sprint.

Friday night, the juniors had a team dinner at Barb's house, that she very kindly organized, and the so-called grownups headed to Grand Ten Distillery, for the Friday Night Flights tour and tasting. Very interesting to learn about how they make their spirits, and I love all the Boston history they incorporate. Totally worth it to go visit! 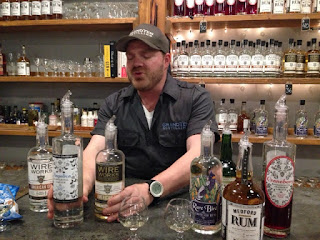 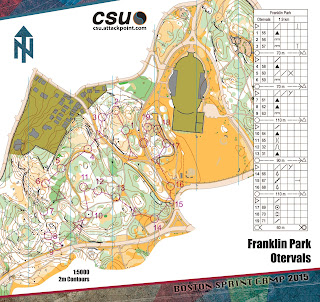 Saturday was a full day of forest sprints at Franklin Park. We started with some intervals, in groups of 3-4 runners, and here's where we had our first casualty - Phil managed to run into a stick, and cut up his eyelid pretty badly. Luckily, it was just the eyelid, and not the eye, but I discovered firsthand that we weren't exactly prepared to deal with a medical emergency. A trip to the Brigham and Women's ER and then on to Mass Eye and Ear, where a specialist came in to do some stitches, and that specialist called in a second specialist... sometimes it pays to hold events in a city with lots of hospitals.  Phil is all fine now, but he was real bummed to miss the rest of the orienteering. 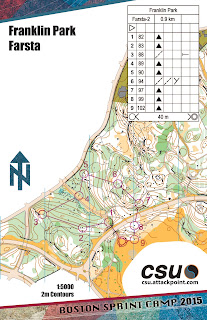 The other event, while Phil was getting stitched up, was a mass start race, with three different maps that everyone ran at least once. It was fun to see so many people in the forest, going to roughly the same places but then veering off to punch their controls.  That made for two pretty intense sessions in the morning, so the third exercise was a slower one, practicing flipping the map and cleaning nailing the first control, over and over. That was enough for the morning, so we ate Vietnamese sandwiches and smoothies, and a big group went to the zoo, before the afternoon race. 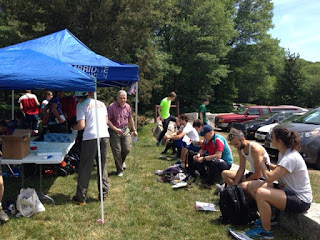 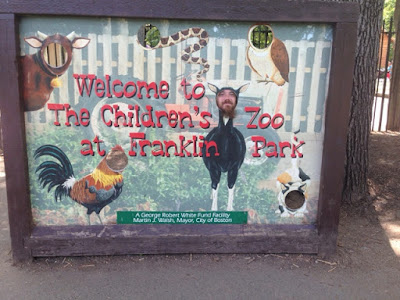 Ed felt that he identified with the goat, today. 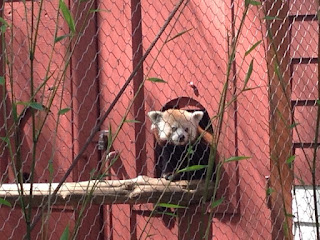 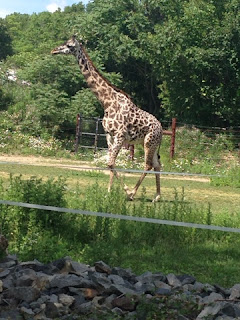 Sunday was the final event, after I'd been up way too late baking pies for the winners. Delicious pies, so totally worth it, but I'd rather just bake pies, and skip the event-organizing part. Also made a couple loaves of chocolate banana bread, because the case of bananas that Ed picked up ripe on Tuesday were starting to get way too brown to be palatable.  Anyway, Sunday's race was a nationally-sanctioned race, a prologue race and then a final, seeded off the results of the prologue. I'd been vetting this one for a few weeks, so I had an idea of how the courses would run, but I was worried it would be too fast and flat, since we were running at Boston Common. But, everyone seemed to enjoy the courses, and I watched a lot of people making mistakes even though it's a simple park. I guess race brain DOES make everything more difficult! 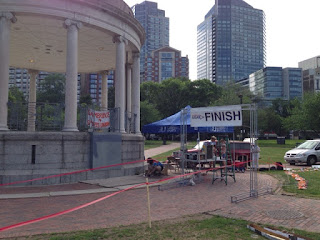 Running in the center of a city definitely changes the feel of an event, and the bandstand was a perfect arena.  We got to witness one drug bust, and then the cops went to a different part of the park where someone had just pulled a gun on someone else... great, way to choose safe race venues! Luckily our race was unaffected by the drama going on around us, and it was clearly different for the runners to dash through throngs of tourists while trying to navigate. 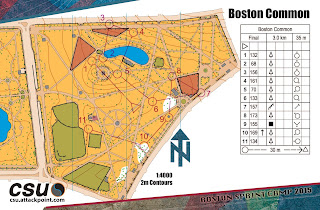 Map from the final; it was two maps with a map exchange so that you couldn't read ahead too much. 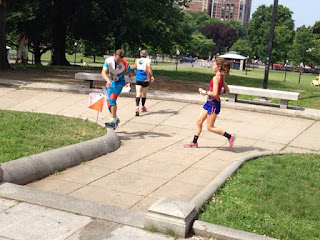 Teammates - Izzy not wearing her CSU gear, but I liked that all three were hitting the common control (there was forking in the qualifier races) at once. Wonderful day for spectating! 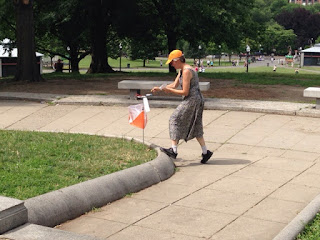 Barb in her running dress. 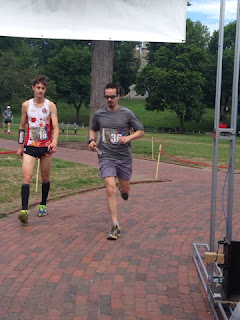 Robbie (walking, because of an injury) and Dan approaching the finish. 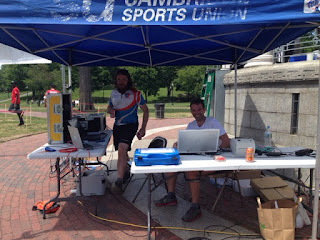 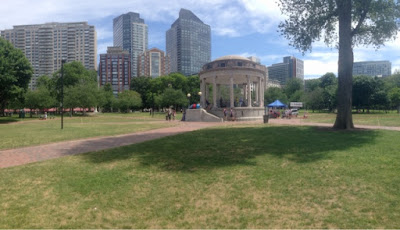 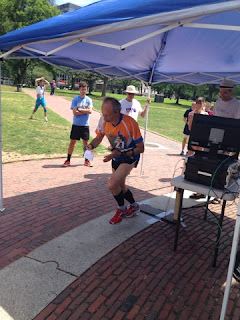 Bill, starting the final. With a real start gate! Super cool that Ed has built this technology and that we can use it at our events! 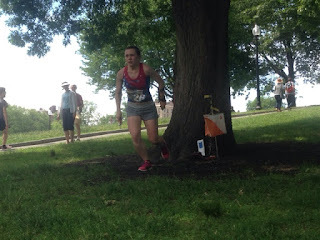 Teammate Kseniya leaving the final control of the final.

All in all, it was a very successful weekend. Sometimes, organizing events can be as fun as running in them, and this was one of those instances.  Watching everyone leave with smiles on their faces and lots of training in their legs made me feel really happy, and Ed and I are already scheming about next year. Super duper thanks to Erin for designing the theories behind all the trainings, to Ed for coming up with this crazy idea, and to all the CSU runners who donated their time on Sunday to make the national meet a success.

Results and other chatter about the meet can be found here, and some of the juniors have already written about this, from both the American and Canadian perspectives.