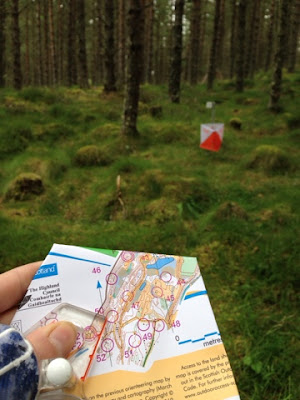 I've been visualizing the long distance race at WOC for the last 12 months. Practicing for it, preparing for it. This was the race I was most excited about. I knew I'd have the usual sorts of disadvantages of living in the States and working a full time job with typical US vacation, but you start every process with a look at where you are right then, and you go from there. Where I was, and where I am right now, is an athlete with a whole lot of commitments to a lot of things that are not athletics. I like it that way. When I set my goals for this race, before I'd even been selected to run it, I was aiming to land in the top 40 in the world, and I had a decent idea of how to do this. Through the spring and summer, training went well, all the markers were being hit. My terrain running was faster than ever. My legs had more spring than ever. My map reading skills were fitting me comfortably, confidently. My emotional state was calm, collected, excited and positive. Prior to last week, I would have told you, I'm ready. Bring it on.

I picked up a cold on Sunday last week. The sort of thing that only really matters when you're at a competition where your result depends on being able to run hard. There wasn't much I could do except rest it out, see if my body could kick this thing before the start of the Long Final, but things weren't looking good. As an athlete who can be drug tested at any time, there's a limited arsenal of over-the-counter drugs at my disposal, and because the limits for things like decongestants are given in µg/mL of urine, the pharmacist had no idea what dosage would be safe. So I just bought more cough drops and toughed it out. My lungs got continually worse until about Wednesday night, and I figured if things weren't looking up tomorrow I'd put in an alternate runner, but that's a tough decision when you've got the last 12 months of training focused on a single race. I woke up Thursday with better energy and less rattling in my lungs, so I figured I was on the upswing. Decision made. I'm starting this race, and by golly, I'll be finishing it.


The Long was held at an area called Glen Affric, and it's known as one of the few areas of Scotland still in native vegetation. This means lots of knobbly pine trees with deep grass and moss underfoot, though there were still some remnant pine plantations. The center of the map boasted a rugged open moorland, heather and moss and crags, which is fantastically beautiful, and fantastically physical to move through. Every training that we've done in the forest here has been taxing, but there is a method, some sort of barely-controlled stumble-tumble-gallumph, that works relatively well to move through the thick heather, at least on the downhills. I haven't yet discovered any method that works for me on the uphills, besides grabbing the heather with my hands to help pull me up. To get to the start, the organizers sent the athletes on minibuses from "quarantine" (in this case, a community center, with no connection to the outside world, so early runners can't send back any information about the course or terrain) to the start. The minibuses had a pretty ambitious trek, crossing a super narrow bridge (like, fold the mirrors in narrow), lumpy roads, and finally a narrow muddy mountain track, for several miles, twisting along the edge of a cliff overlooking an utterly gorgeous lake, with snow still hanging on to the edges of the mountains beyond. Rugged, remote, beautiful, and raw. How can this place not inspire you?

Oh, I forgot to tell you about the midges. 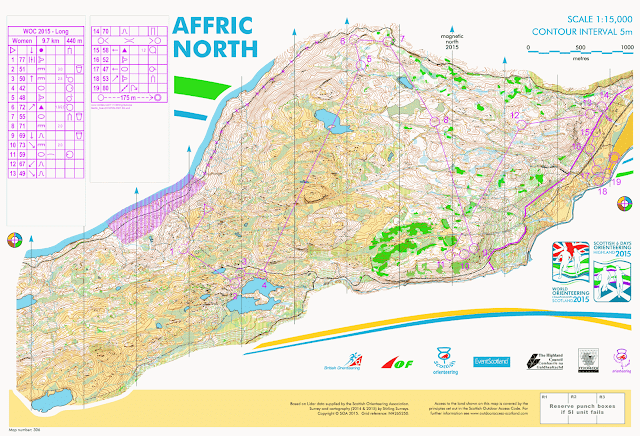 I still had quite a bit of rattling in my lungs when I breathed too deeply. My plan for the race was mostly survival - I knew I needed the navigation to be perfect, since I couldn't move too fast, and I was ready to be braindead at really slow speeds, thanks to said lack of lung capacity. My plan also involved remembering how much I love to orienteer. Because it really sucks to be at a World Championship race and know before you even start that you aren't going to be able to perform how you know you're capable, so it's easy to get down in a negative spiral.

I started out well, but at a glacial pace. Watching my GPS track after the fact still makes me cringe. I wobbled my nav too much on my way to #2, and Mojica, the Slovenian who'd started 3 minutes behind me, caught up there. I couldn't keep up, so I continued to trudge along, slogging through my own race. As I pulled myself hand over hand up a steep slope of heather on the long leg, my thoughts tried to pull me down. I couldn't breathe, I was already walking, and I couldn't go any slower. I had to stop twice, hands on knees, just trying to pull in the oxygen, until I could move forward again, maybe 15-20 seconds lost. This sucked.

As I neared the 5th control, a whole pack of runners caught up. I tried not to let that depress me, and instead upped the pace to keep up, having finally exited the heather and entered forest, and hey, I can run in a forest! Sudden infusion of energy, and I pulled to the front of the pack, confident and smooth and almost happy. I lost them taking a different choice to the 8th control, but being in the forest again was good for me, and I focused on the relentless forward progress.

By the 13th control, I'd burned through what little energy reserves I had. Despite taking my final energy gel, my muscles were completely finished, and I started to stumble a lot more than I normally do. The final loop in the field killed me. I would trip, fall, and get up. Trip, fall, and get up. Trip, fall, and get up. Relentless forward progress, slow as it may be. Maybe I don't know any other way than to pick myself up and keep running after a fall. Maybe I was thinking about my teammates, and how if I could finish in the top 60, I would earn us points towards keeping our two start spots next year. Maybe I was thinking about my little GPS dot, on a computer screen at home, with my friends and family watching it stumble along. Maybe I was thinking about my team, down in the arena, watching my struggle. I was embarrassed to be in this state, embarrassed and ashamed to have thought that I would be a match for this race, but I was determined to get to that finish line. I don't think I know any other way. 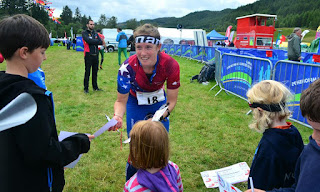 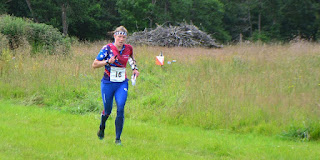 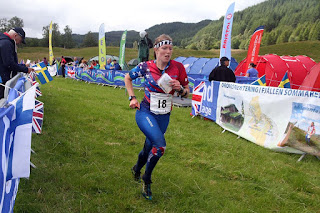 It's hard for me not to feel disappointed after this race. I tried to prepare myself, knowing that the sickness would tax me of my strength, and I think I can be proud that I managed to fight the whole way. I ran a very "clean" race, with no real navigational mistakes, but it is immensely frustrating to know how much better I could have done, maybe just one more day of recovery. I still ended up in 55th place, which earned a few meager points for the USA, and who is to say that the alternate would have run any better? The best place by any of them in the Middle distance two days earlier was 59th place. But that doesn't make the frustration any less. The World Championships arena is a very difficult place to have a bad race. 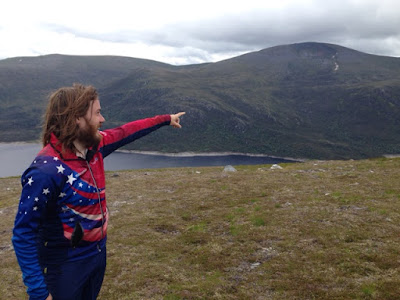 If you're feeling down about something, go do something else that makes you happy with people you love. Works every time.

Lovely running once you get above the heather. 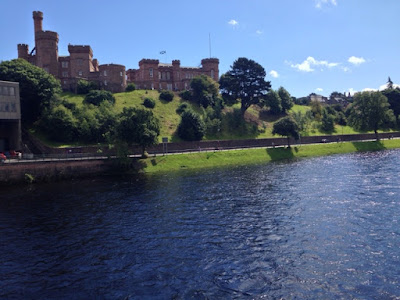 One more castle - this one's a repeat, Inverness castle, but it looks a lot better from this side, so I threw it in.

Good writing as ever my Ta, giving a flavor of the challenge, but especially, the "flavor" of you -- the determination, the professional attitude, and a bit of the you-ness that loves being alive no matter what. Love the picture of you signing autographs -- and the way the panacea of "do something else that makes you happy with people you love". Yup. I won't think of heather quite the same way -- it no longer is the pretty purple stuff that gives Scottish countryside a sweep of romantic color... but rather something to arm wrestle... Congratulations for sticking with it, getting through with a handicap of a lung-attacking cold-- rising to a double challenge of a world championship event, and dealing with the disappointment of a bad-luck cold, without losing your spirit. xoxoxoxo