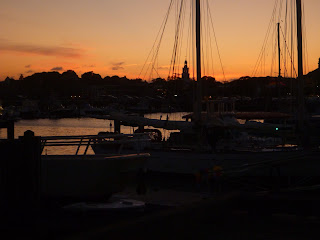 Two of CSU's coaches, Doro and Gunther Kern, are actually beach bums in disguise. The past few years, they've run a ski camp down on Cape Cod, with a couple goals in mind - have fun, relax, learn how to make fitness happen anywhere, and build some much-needed agility into our endurance-based training program. I've never had the opportunity to go to that camp, but this year, we put it on labor day, which meant I could come! And after a weekend with a fabulous group of skiers and an even better group of coaches, I don't think I'll ever miss this camp again. It was pretty sweet, and a nice way to recover from the accident earlier in the week, at least if you think endless activity in the sun is a good way to recover!

Day 1 started with a run on some beautiful wooded trails through the sand dunes, down to the beach for some yoga. Amazing how the beach was completely empty at 8am, but totally crowded by 10. Immediately post-yoga, we all sprinted for the waves, just SO EXCITED to go play. That energy stayed high all weekend. 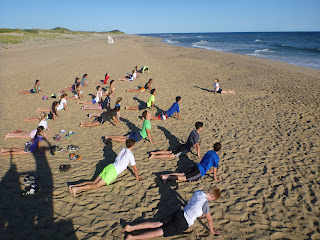 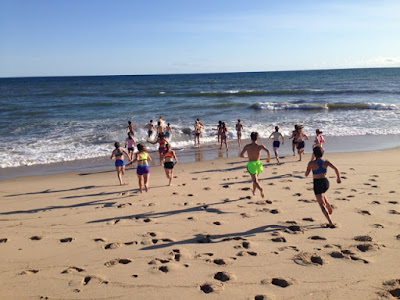 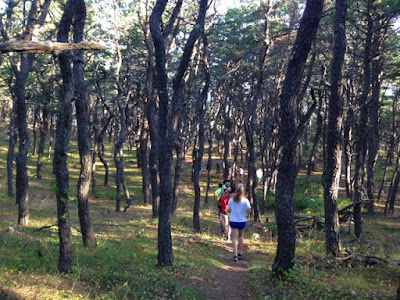 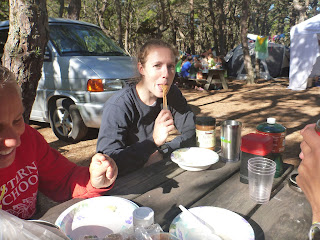 The Kerns cooked for thirty people every morning and every night like it was no big deal. I tried to help, but mostly I think I just got in the way. Food was good, but thank god for Costco, with that many hungry skiers! 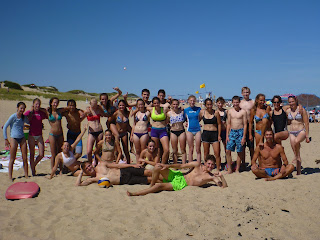 Pretty much all day Saturday was spent at the beach. First Doro organized a relay, with four teams of five athletes each, involving all sorts of silly activities were were actually really hard. Sprinting up and down from the water to fill a bucket with a dixie cup, potato sack races, paddling on a surfboard, swimming, wheelbarrow races, and running while balancing a pinecone in a spoon (drop it and you owe 5 pushups) - the relays were pretty exhausting. As soon as the relays were done, the volleyball net went up, and there went the next few hours. 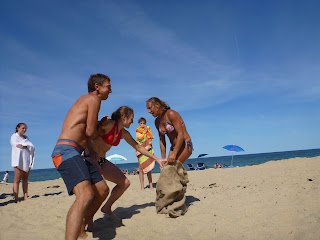 Naturally, the coaches had a relay when the kids were done. I was Doro's partner, and we were doing great up til the swimming part. I suck at swimming, and turns out swallowing seawater doesn't help you go fast. There may have been some roughhousing, and I may have dropped the pinecone because I was trying to tackle Gunther at the same time. 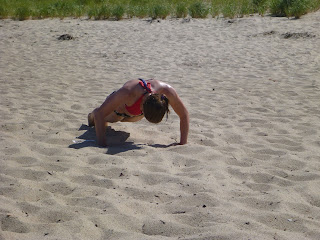 Whoops. Lots of pushups on the beach. 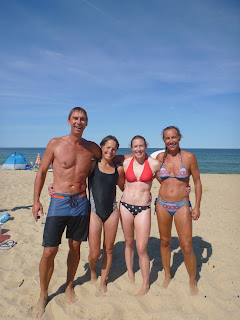 I'll coach with this crew any day. You can tell who spends every weekend at the beach, and who works a desk job. 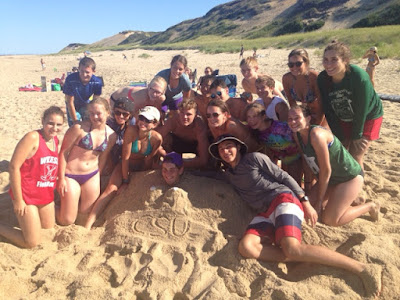 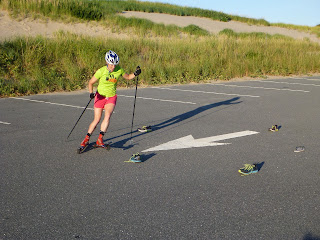 After the beach, we geared up for an evening rollerski, straight from the campground. It ended in a parking lot for a sweet agility course, which naturally turned into another relay race. 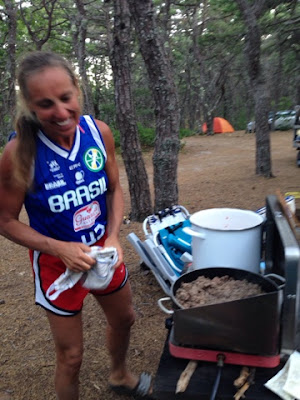 Sunday, we had an early roll on the schedule, up in the Province sand dunes. There was this awesome bike path that rolled and twisted just like a ski trail, and the kids had an awesome time up there. Thanks to a little snafu involving my keys locked in the car, I ended up on Sue's bike to ride with the kids. What a beautiful area up there, I totally get why it was worth shuttling all the athletes to ski those dunes. 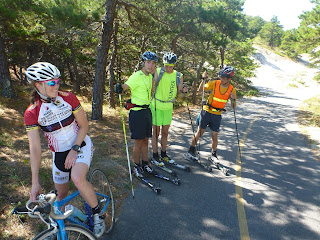 Riding with some speedy boys. 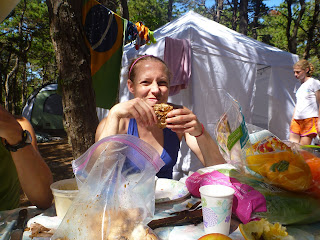 The food was awesome. Though everything tastes good when you spend all day outside. 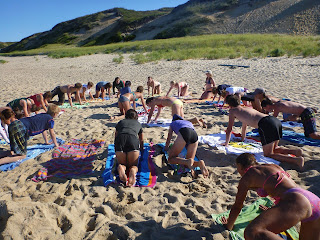 Naturally after the roll, and a very brief siesta, it was back to the beach, where we got a good few hours of free time (and great surfing!), before we gathered for a little beach core and more relays. Strength on the beach sure beats flopping around in Jody's backyard getting eaten by mosquitoes.

We got a beach fire permit for Sunday night, so that activity took up most of the evening, with Doro making us "knuppelkuchen", which is essentially cake on a stick, that you roast in the embers and fill with applesauce. Good stuff. 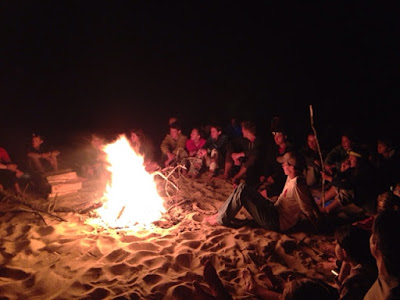 The final day we did an early roll from the campsite, and then back to the beach for a few more hours of volleyball, surfing, and boogeyboarding, before it was time to shuttle kids to the ferry and have others get picked up. I may have sent three kids onto a bus going in the wrong direction, but they were smart enough to figure it out, and everyone ended up getting home successfully.