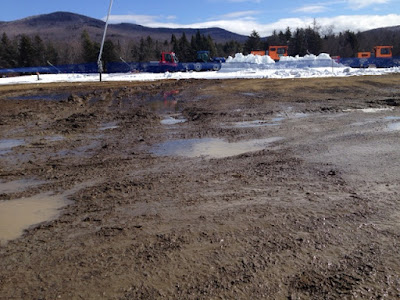 Each season usually wraps up with a championship race for the juniors, whether it is Junior Nationals, U16 Championships, or Eastern Highschool Champs. The U16 and EHS champs are where the states are pitted against each other, and CSU makes up a large portion of the Massachusetts Team. I love coaching these events, because it is always fun to watch my skiers really throw down when it matters.

Last year I coached the U16 trip, and this year it was EHS. We were up at Rikert Nordic, which harvested snow masterfully through this bleak season, and despite the weather stay above freezing for the entire week before, we managed to have our four races. If it hadn't dropped below freezing on Friday night I think we might have been SOL, but they worked some serious magic defying mother nature last weekend.

Conditions were seriously treacherous each day, for varying reasons. There were the deep ruts in the slush, grabbing your skis and sending you sideways into the woods. There was the icy mass start on a downhill into a 180-degree corner with 110 skiers. There was glare ice on the uphills, glare ice on the downhill corners, and glare ice in the tag zone of the relay. We had one broken thumb, two broken skis, a slew of broken poles, a sprained wrist and a lot of bruises from some pile-ups in the mass start. We had skiers fall off the trail into the mud, bounce back up and keep skiing without skipping a beat. We had crashes in the tag zone. It was a weekend about rising above the challenges and reaching past your limits, and I saw some seriously impressive performances. Of course not all my skiers were happy with their races, but you could tell who had kept training through the last month of crappy training conditions, and who had given up. The Mass team showed their mettle, and I was impressed. 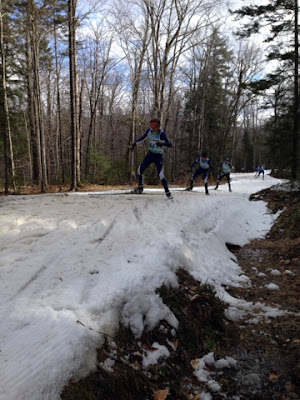 Matt and Oliver slogging through the ankle-deep slush and mud.

My job as head coach this weekend was really easy. We had a large coaching staff, and the parent wax team for in the trenches. I mostly stood around and leaned on my poles. Got a chance to watch all the races, talk to each kid before and after the races, and even go on a couple course tours! What a treat. It's easy to run a large team like this when they're so good at what they do. 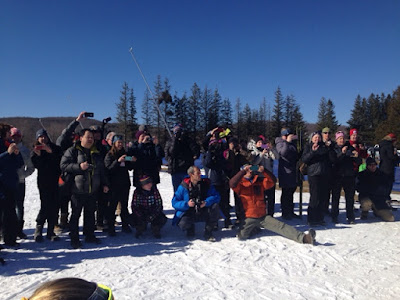 The view from the "team" side of the team photo.

That definitely marks the end of a painful ski season. We were struggling pretty hard to keep doing this sport all winter, and it is actually a huge weight off my shoulders now that I no longer have to worry about what we'll be doing for practice. Ironically, it snowed 4" on Sunday night in Boston...

Here's to the spring racing season!