I hadn't run this one before, but Ed did it last year and wanted to go again. Sure, long run can be a trail race, why not? And actually, this one was pretty runnable, so that fit the bill nicely. And you can't go that wrong with a Grand Tree race. I took a look at the Ultrasignup predictions and some past results, and decided that I'd be pleased with a 2:10, but aiming for closer to 2:05. That would be averaging a little over 9min/mi, so knowing that number would give my brain something to crunch while running.

The race started down a gradual dirt road, so the first mile basically felt free. It was fun to cruise down that road in a tight little pack, just letting the ground roll away behind us. Then we turned onto some flattish/rolling singletrack back up toward the main paved road, and it was so pretty. We've had such a late spring, all the leaves were still in that light green/golden glow, with some stuff still flowering. What a day for a run! At the main road, we crossed and headed up Soapstone Mountain. Rutted and washed out and dirt, but not mud, which would have been tough at that incline. At this point I was sitting as second woman, with Kehr out of sight but no real challenges from behind. I'd built an ~3min buffer on my goal time over the first two miles, which disappeared quickly hiking up Soapstone. Breakneck tumble down the other side (wheeee!), and then some flatter/rolling trail. It was a fun trail, definitely runnable and fast but technical enough to keep me happy. 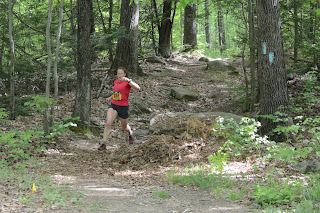 Thanks to Shenipsit Striders for the photo. Downhills go "wheee!"

Given the cool temperatures and aid stations every ~3mi, I had elected to not run with a water bottle. You'd think I learn from my mistakes, but I repeatedly prove that I'm too stupid for that. Not running with a bottle means you have to spend much more time at the aid stations, and then you run off with a belly sloshing full of water. D'oh. Future self, please don't do this again. So, I was definitely losing more time at the aid stations than was ideal, around 30-45 seconds of drinking.

Somewhere after the first aid station, the trail took a sharp bend left off a cliff, and I was coming down a hill approaching that junction, thus going fast enough that my eyes were watering a bit and I was really focused on my footing. I saw a yellow blaze on a tree and race-brain thought that was good enough, even though I was supposed to be looking for white blazes or yellow flags in the ground. Rain-brain really isn't very smart. Whoops. That cost me a bonus hill and ~1.5 minutes, along with a good number of the damns I'd brought to give along the way.

The next few miles were flat/rolling and gradually trending downward, and I tried to pick people off but they weren't coming back to me very fast. It was sort of nice to have my watch beep every mile, and I was only a little behind my desired pace, but with my little bonus tour I didn't know how much extra distance I'd done. The downhill culminated in a stream/trail, over loose rocks, and my busted/abused ankle really did not like that part, so I ceded even more time.

On the gradual rollers back up toward Soapstone Mt, I put out an honest effort, but I was tired. Definitely riding the edge of that pace where most of your thoughts are concerned with stopping, or maybe hammocks and beer and a nice breeze. The trail was rocky enough that when I lost focus I'd slow way down, so I tried to stay focused on moving forward efficiently. Anyway, my efforts yielded me two dudes, but no ladies, and it was a real relief to start the climb back up to Soapstone, since that meant I was almost done. The descent was hard on my ankle, which was complaining about all the micro twists from the river running, and I backed off a little in the name of self-preservation.

The final 3/4mi was painful, and felt like it took forever. I passed two ladies with a dog, and one reprimanded her dog "don't interfere, dog, this lady's having a hard time," which made me chuckle, and she immediately tried to justify "but a hard time in a good way!" I guess I didn't look like I was having a good time at that point. Eventually I lumbered across the line, 4th woman, about a minute slower than I'd hoped, and not feeling particularly positive about my shape. But that was a fun course, and had a nice race vibe. 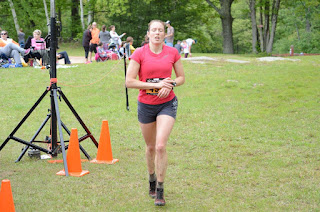 This lady's having a hard time. Shenipsit Strider's photo.
Results
Posted by Alex at 11:35 AM