It's been a while since I've really pushed a race effort. There were the weeks of marathon training, the weeks of not-training, a week or two of a chest cold, then the marathon itself, which, while a hard effort for sure, was not the sort of hard effort that makes you bleed from your eyeballs and scrabble in the dirt as the lactic acid demons drag you down. Those sorts of efforts need to be consumed in moderation, of course, but if you don't taste them from time to time, you lose the ability to savor that racing edge.

With my knee on the mend, it looks like I'll actually be able to do the races on my horizon. Three weekends of orienteering National Events, and a couple cross country races with my junior skiers. The skills that need refreshing right now are some basic navigation, and some re-familiarization with the pain cave.

The first stop was Pawtuckaway State Park, for UNO's famed Camping Weekend. I love this weekend, mostly for its infamous Wicked Hahd Night O. But, I actually decided to try and keep my knee on the healing track, as opposed to the more-broken track, and chose to just do one race at Pawtuckaway, instead of the usual three races. Bummer, being smart isn't nearly as much fun as making bad decisions!

My goal for the run was to stay focused on good technique the entire time. Exit direction, and make a plan. I wanted to try and do these things under a little bit of stress, because anybody can orienteer well at slow speed if you think about it enough. So, time to apply some oomph. Click below for the full map:

In general, things went well. I was forcing myself to look at my compass, and sometimes it told me to go directions that I didn't want to go, but if I listened to it, I would arrive in the right place. Useful little tool, that. I had a lot of hesitations along the way, some of them because I hadn't fully visualized my plan yet, and some of them just because I couldn't read the map while running. Never my strongest suit, it was definitely the first skill to go. Below is a zoomed-in version of some of the map, with a bit of annotation from the brain of Alex - 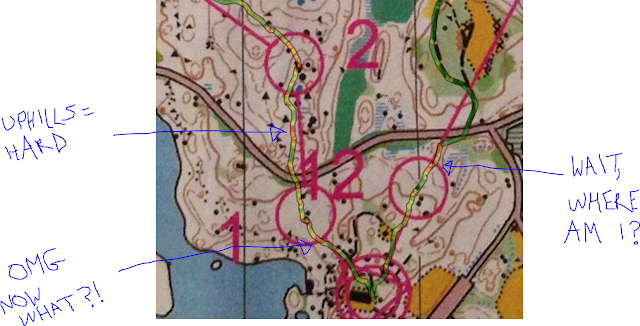 Prime example of how quickly orienteering skills go rusty. The green is where I'm running with some degree of oomph, yellow is sort of a slow confused jog, and red is... not fast. Also, beautiful map layout, with the label for control 12 overlapping the control 1 circle and its line... you just can't unsee this sort of shit. 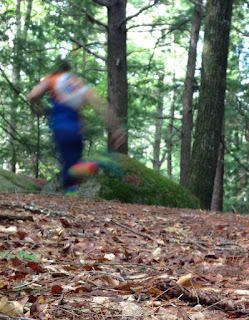 Leaving the start, I had had a moment of panic - omg, I'm alone in the woods, and I don't know where I am! It didn't take more than 15-20 seconds to remember that it doesn't matter where I am, just where I'm going and how to get there, and then things were a little smoother. It was so much fun to run through the woods again, and I was pleased to find some bounce in my legs and that I hadn't lost all my ability to duck and weave and bash and jump. There's hope for next weekend if I can listen to my compass and make a plan for each leg. I was winning the course by about nine minutes when I left, but results aren't online yet, so I don't know how I fared in the end.

Next step was a little exploration of the pain cave. The CSU juniors were running an uphill test at Wachusett Mountain on Sunday, so it was time to join them. After a pretty solid warmup, my knee was complaining a little with all the bending. I decided that it was probably going to be fine; this wasn't pain, just some swelling interfering with normal movement, and uphills aren't fast enough to really hurt things. We had a good crowd there, with a number of hardcore parents joining their hardcore kids, and the weather was perfect. 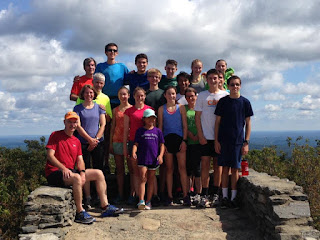 The time trial goes up the road, which is actually pretty flat except for two pitches. We started out, and like any uphill time trial, there isn't much strategy. I started near the back, and slowly moved up toward midpack by the time we got to the junction. After you turn the corner it's steep for a little while, and I did not feel efficient. Unused to this much suffering, my brain was asking perfectly reasonable questions, like "can we stop now?" and "what if we just slow down a little?" So, I went a little faster, because clearly if my brain can think reasonably, I'm allowing it too much oxygen. As we neared the top, I was definitely anaerobic, and it was sort of sad how little speed was garnered for so much effort. But, you have to start somewhere, and spending 19 minutes peering around the pain cave and dusting some of the cobwebs near the entrance isn't bad for a day's work. 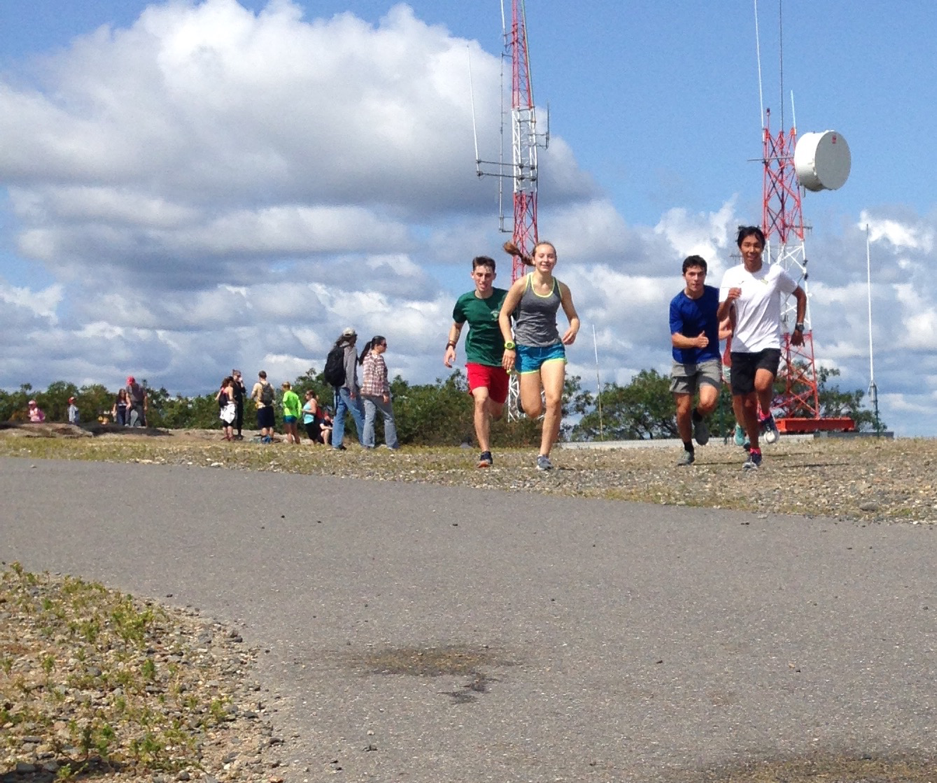 The "bonus trip up the hill" kids on top of Wachusett.


After another trip up, this time on trails and more of a threshold effort, I was good and done. My knee felt a little complain-y, but with no pain, I'm feeling positive about being able to compete successfully next weekend at Letchworth. I don't have a huge amount of fitness to back me up, but this weekend assured me that I can still muster a little speed if I need to. 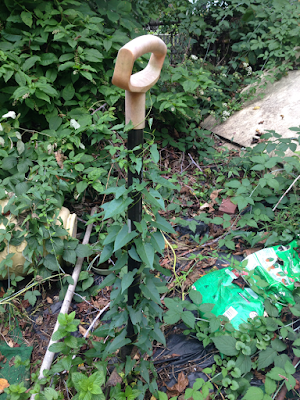 My orienteering skills are about as unused as this pitchfork in our garden.