The final Grand Tree race that would fit into my schedule was the Mt. Toby Trail Race. I've never done this one, and despite spending two years staying with Peter and Gail at the edge of the forest, I've only run on those trails twice. From what I'd heard about the race, I wasn't that excited, because it sounded like a hillclimb on wide trails with good footing, and the hillclimb wasn't quite steep enough to warrant hiking. My strengths are short and steep ups and downs with very technical footing, sort of like 7 Sisters. But a race is a race, and the weather looked gorgeous, so I was excited to pin on a bib. 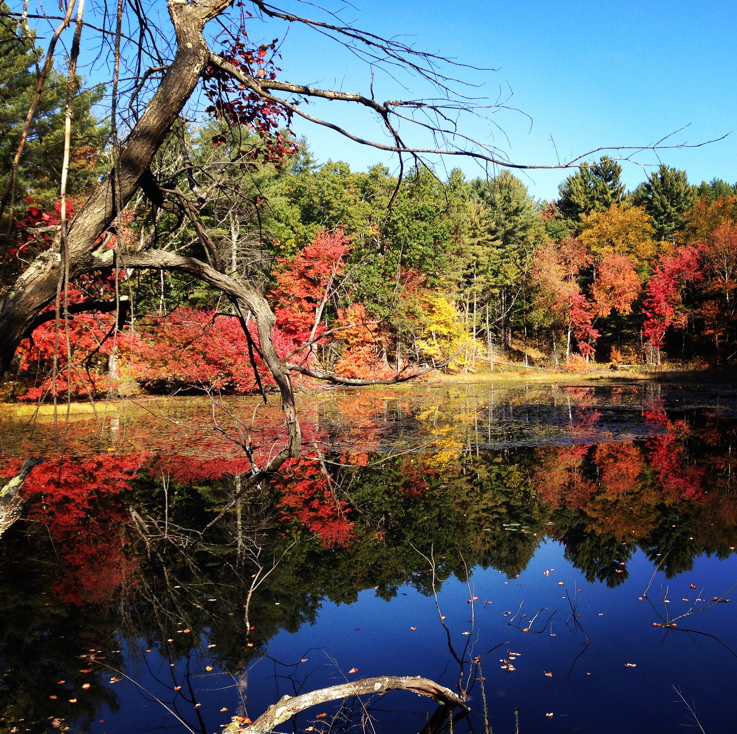 I ran into a couple people I knew beforehand, but didn't know how we'd all stack up. My time goal was to be around 2 hours, maybe under, just based on looking at Kelsey's time from previous years. I could probably be 15 minutes behind Kelsey on a hillclimb, right? More importantly, that's where my typical Grand Tree points would place me if I had a typical race. I had no intention of any heroics today, I was tired, and despite getting in some decent cross training in the last month or two, I haven't done much running to support going fast. This might just be a sufferfest.

The course started with about a half mile of pavement, then into the woods on a jeep road to climb very gradually uphill for 4 miles. Short downhill, then more flat before the final climb to the top of Mt. Toby, also on a jeep road. The footing was generally good, with no leaves down. I found myself jogging along with quite a few other people, and I let myself just settle in. I was maybe fourth woman, with a few others in site, who all looked skinny and fast. I, on the other hand, felt jiggly and slow. I realized that this would be one of those mental-battle sort of days, where you try to get the positive supportive voice in your head to drown out the mean negative voice. Because that nasty negative voice never makes you run faster. 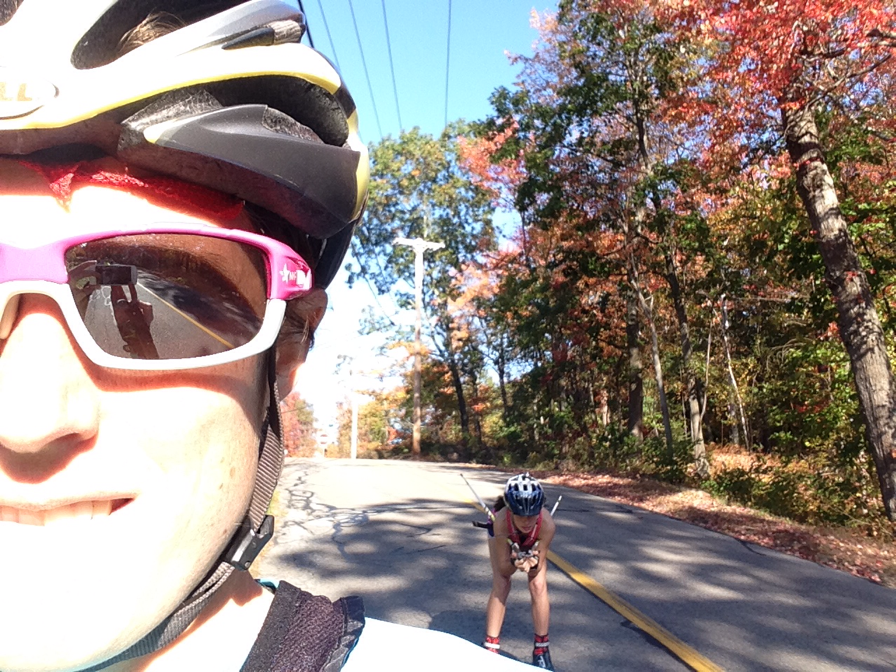 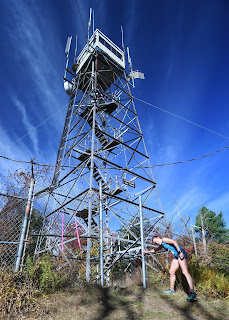 After about a mile I started to turn the screws, just a little, and I reeled in one of the women ahead of me and made contact with the other two. I moved in front on the short downhill at mile 4, but on the flats thereafter they had no problem catching back up. The fact that I haven't been on a track since July was increasingly obvious to me - this race course was a fast one, and my legs haven't moved this fast in months! We finally started climbing, and it was clear that the lady in the pink shirt, Beth, was the better climber. She slowly pulled away, and I turned my positive self-talk up to 11.

Hill climbing is so silly, everyone is just crawling up this hill, barely making any moves on each other, oblivious to most of the world as you just try to get the oxygen into the legs and keep the forward movement. Part way up, I realized that my left foot was falling asleep - I'd done it again and tied my shoe to tight (I should mention that I keep doing this because I HATE loose shoes). This time, I decided that I would learn from past mistakes (see 2017 7 Sisters...), and I stopped to untie and loosen it. That took maybe 30 seconds, but seemed worth it. Eventually the top guys came flying down, and I knew I was nearing the top. I took a split on Beth as she came down, then up to the fire tower, touch the pole, scarf a gel, and the good part starts! 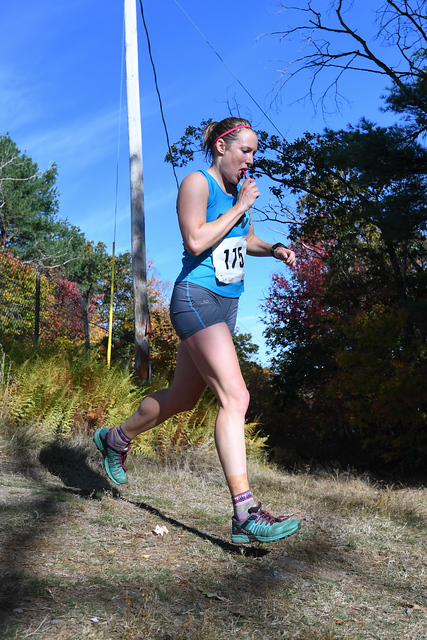 Thanks to Ben Kimball at Northeast Race Photo for the shot of me doing two things I'm good at - eating and running downhill! I went with the Roclite305 Inov-8s, today, for a little more cushion on the downhills and not needing the traction, and they were a good choice.

Beth was about 4 minutes up on me at the top. With such good footing on the descent, I knew I'd be hard-pressed to catch her, especially as it seemed she wasn't a terrible descender. By the bottom of the big hill, I could see her back, but it was still a minute or two difference between us. I was in hunt mode, but I was also really starting to hurt. 14 miles of fast running is something I could have eaten up in July, but now, I'm more ready for rollerskiing than anything fast. Oof. My hamstrings and butt were starting to complain, and my breath was getting more ragged as I pushed up the short hills before the final flats.


I was nearly ready to give up. All the streamers marking the course were pink, so every time I'd look up I'd see a pink movement, thinking it was Beth's shirt, only to realize it was survey tape. My brain couldn't take the continuous bashing of hope, and the positive voice trailed off. I knew that it was a case of beer on the line, and I really wanted to win that beer, but the nasty little negative voice started to pipe up. Maybe if you drank less beer, you would have gone faster up the hill. You're not a good runner, you're not fit, why are you even out here? The negative gremlins in my head were winning, and my desire to suffer was waning. 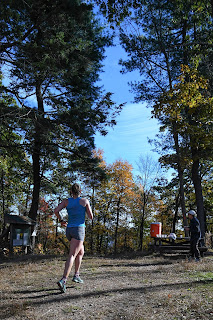 Luckily, the positive voices noticed the attack, and took back over. I kicked it back into gear, and kept hunting. Some of the guys who'd been ahead of me on the climb were coming into view. My hamstrings were distinctly unhappy with the pace, but I couldn't let up. Beth's shirt popped into view on an uphill, and I knew I was still in it. If I could make contact while still in the woods, I may be able to get enough of a gap to hold her off on the final climb to the finish. I kept striving, and then I made contact - just as we hit the pavement. Worst nightmare, because now it's just going to hurt the whole way in.

I tumbled down the hill a little faster, but I was completely gassed, barely keeping my feet under me on the downhill. We started back up the hill and I stayed focused on the process, just drive the elbows, strong feet. At least make her work for it! Beth easily closed the gap, and pulled ahead. We turned the corner, and I could see the finish, and I tried to kick, but there was no response. Swimming in lactic acid, my brain had been willing me along for too long, and was as out of oomph as my legs.

Second place is fine, and I cruised under 2 hours with 1:56. But, I can't help but feel disappointed, and that I lost the race. It was a lot of fun to battle and chase, though! Next time, let's do it on a course with some rocks :)

Nice write-up, Alex; kind of a page turner! Even though I already knew the outcome, I found myself reading those last few paragraphs thinking you might just beat Beth there. Also, I feel I should apologize for something: I marked the course so all that pink flagging, umm... yeah. That was kind of my fault =)