The Orienteering USA Annual General Meeting was out in Laramie this year at the Rocky Mountain Orienteering Festival, and that seemed like as good an excuse as any to do some orienteering and dust off my map-reading skills before a busy fall. Laramie has some great orienteering, a mix of fast open short-grass prairie, rocky granite stuff, and a little bit of pine forest, that's rapidly dying due to pine beetle infestations. Between the great visibility and the firm ground underfoot, the orienteering there is super fast and confidence-inspiring - basically, orienteering in Laramie makes you feel like a real badass. 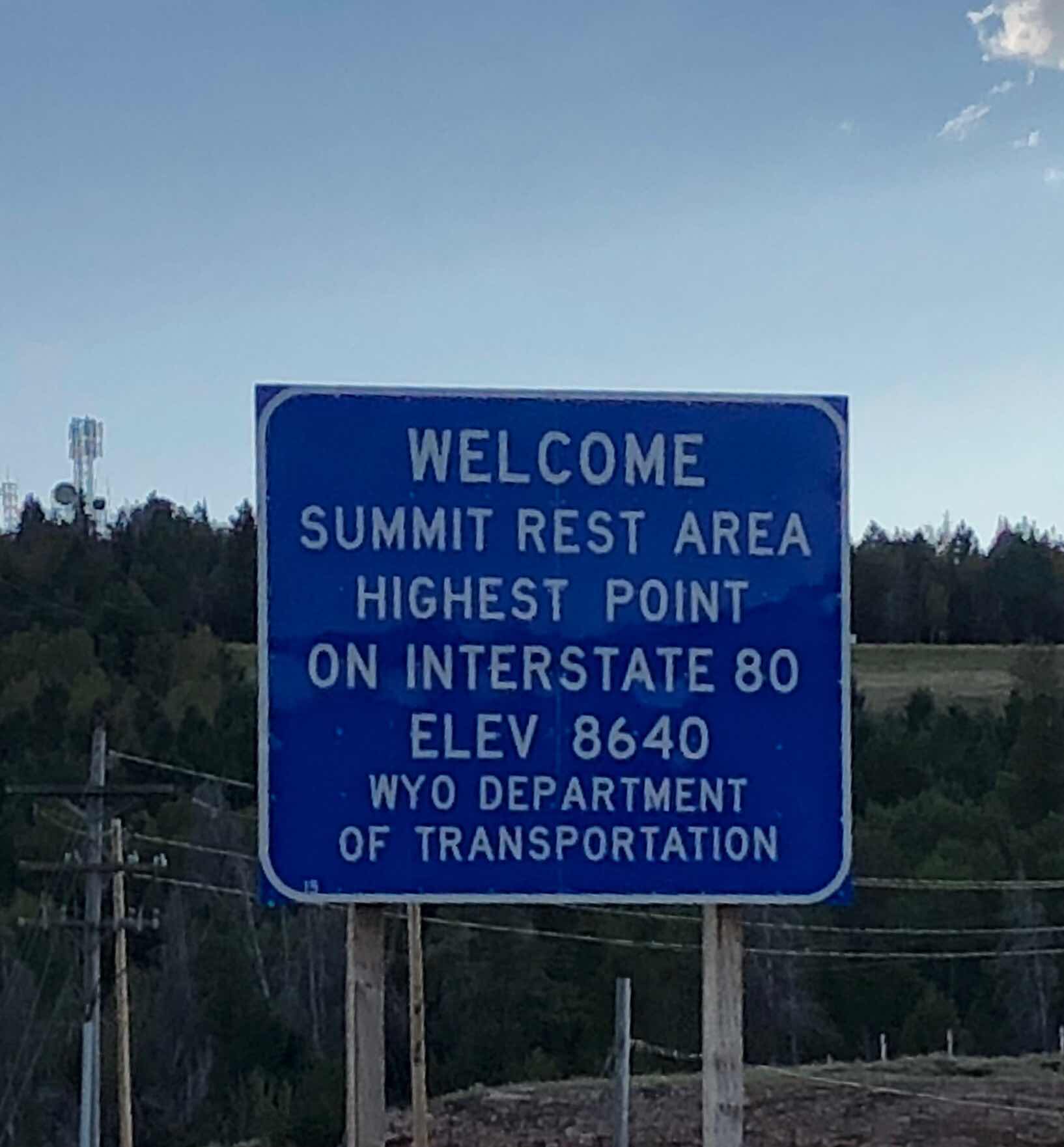 The altitude, though - that takes some getting used to. 8500+ feet is a lot of elevation, and on the first day stairs were a real struggle. I was out here two years ago, and pushed hard straight from the get-go, which led to some mild altitude sickness. This year, I had six days instead of three, so I determined to take the first two days a little easier. 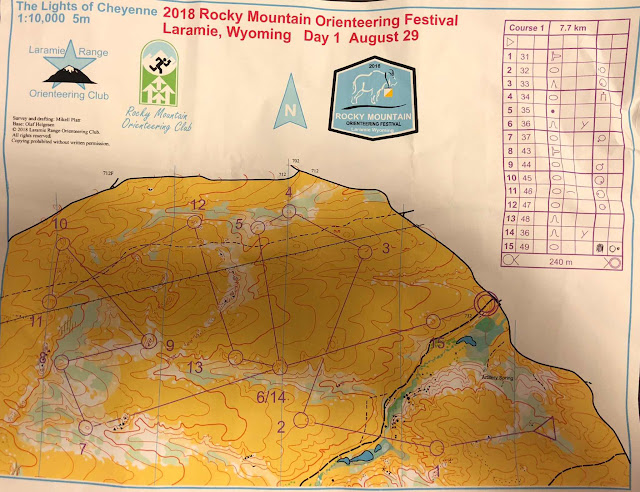 The first day was a mass start run, on a wide-open plain. I walked every uphill, but let my legs go a little on the downhills, keeping a small pack in sight. We had a few controls in the woods in the middle of the run, and I was able to drop my pack, which always feels good, and then the course finished with some nice downhill legs, again, things to make you feel like a badass. Very enjoyable start to the week!

I was sharing accommodation with Tyra, a friend on the US Team, and the next day as we headed up toward the races, there was a sign that I-80 eastbound was closed due to an accident up on the plateau. Well, shoot. We tried one option to get around, but there just aren't that many roads in Wyoming, and this one ended in a padlocked gate with no trespassing signs, so that was that. We decided that the best possible thing was to make lemonade out of those lemons, and headed west into the Snowy Mountains, to do a longer hike. Such a good decision! 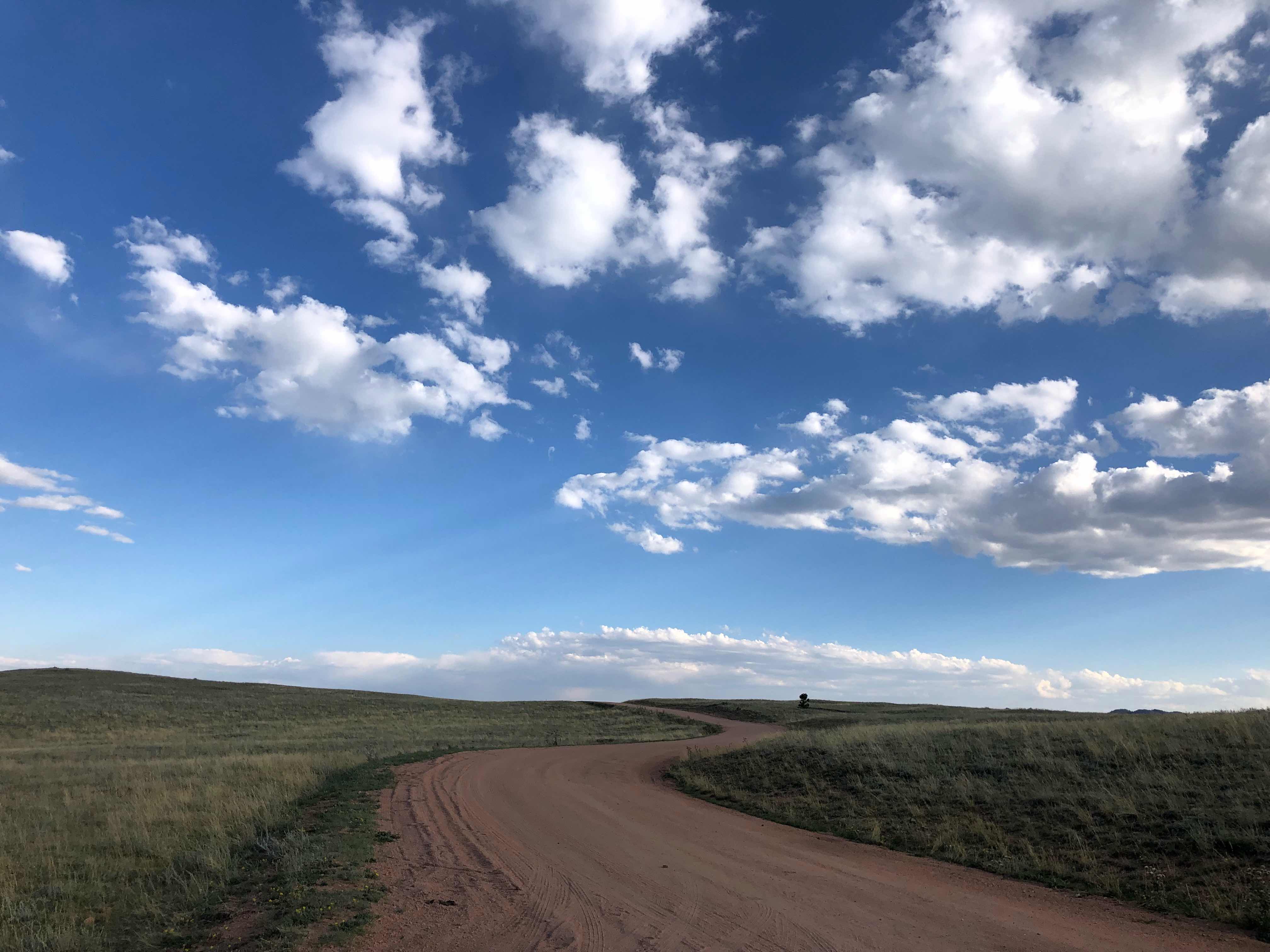 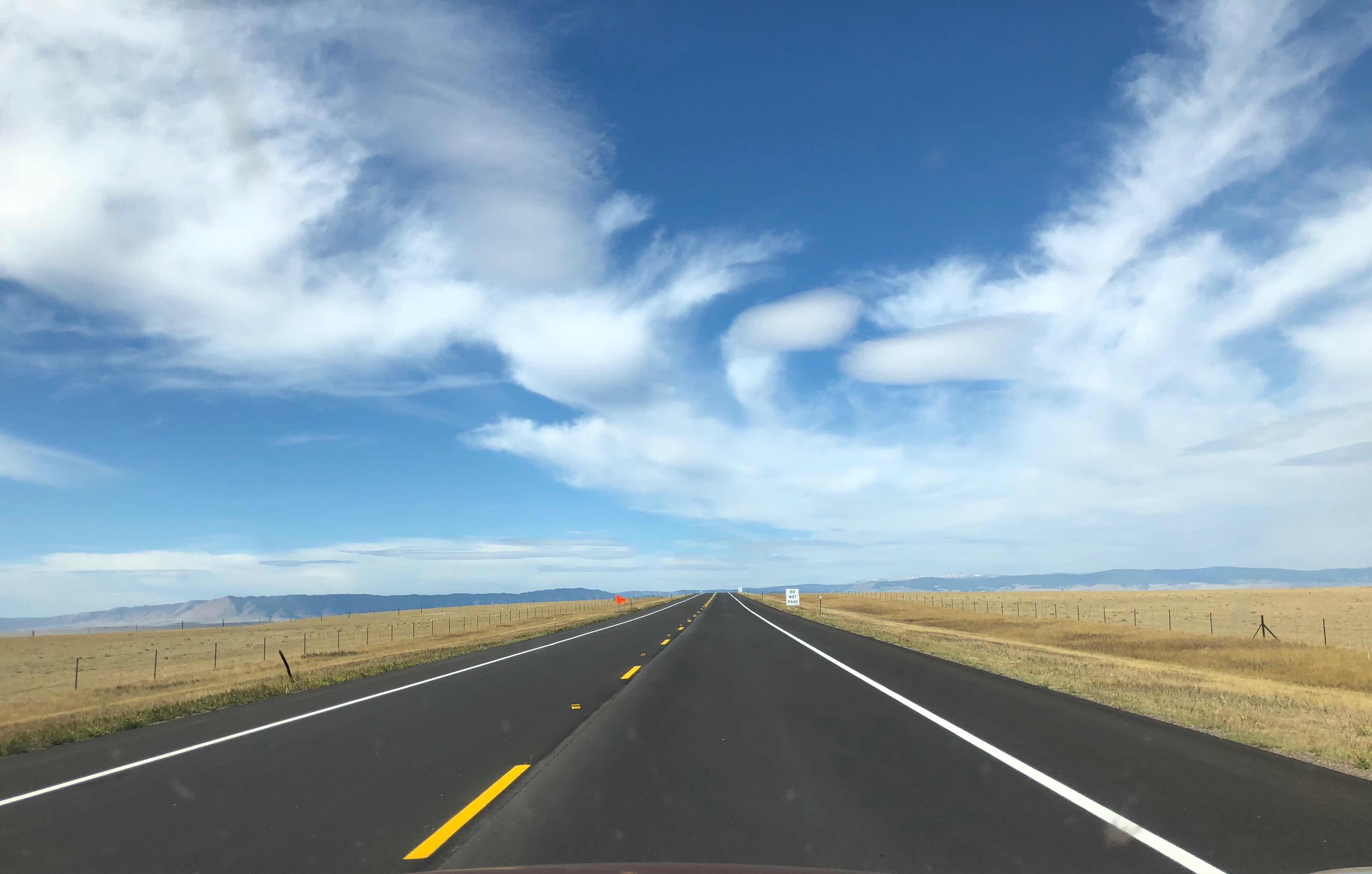 We started at Lake Marie, and immediately started climbing, up to about 12000 feet and Medicine Bow Peak. It was gorgeous, open alpine tundra with a smattering of rocks, and of course Tyra and I felt the need to run back and forth on the trail taking way too many photos. 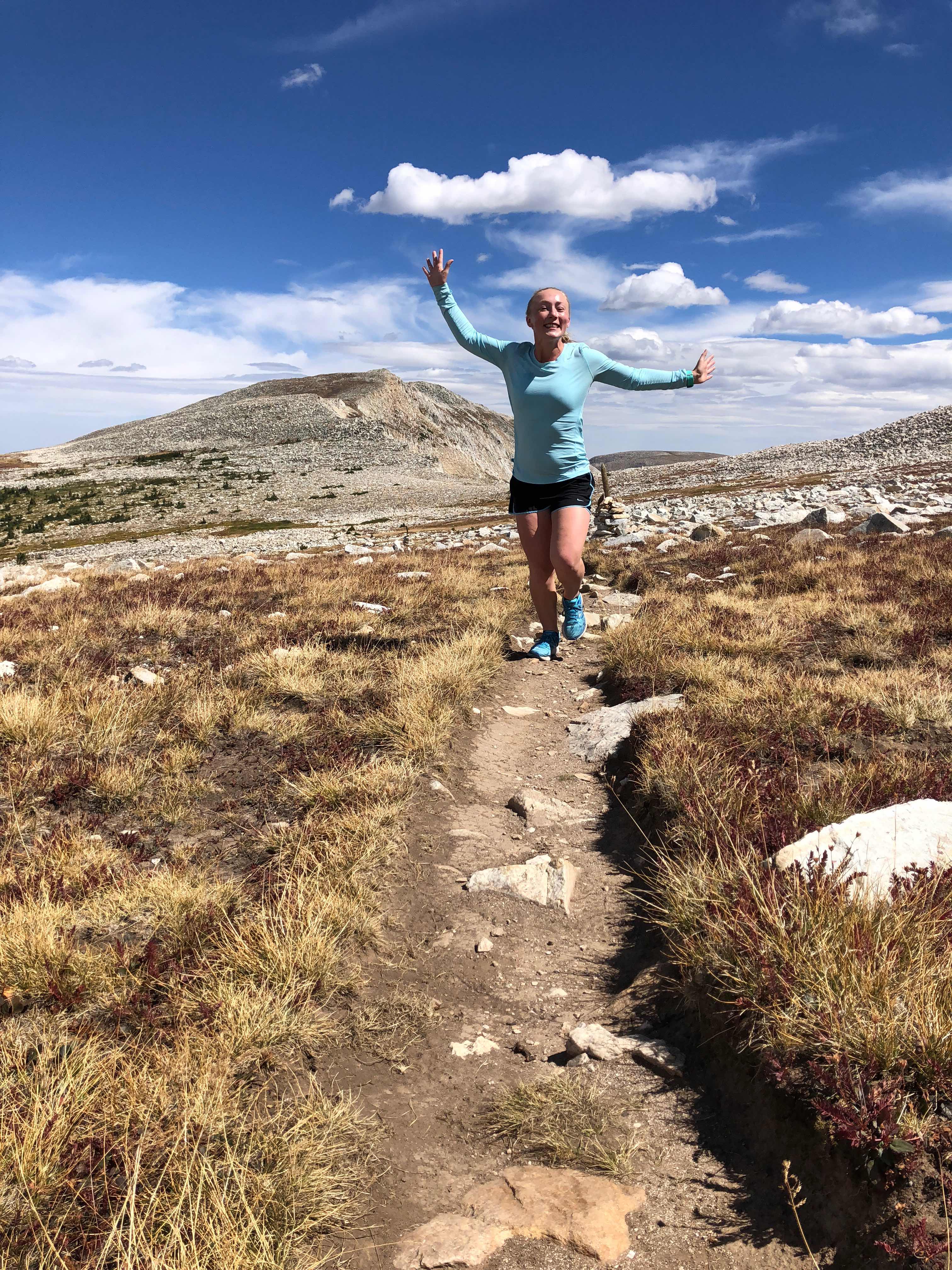 Tyra in the zone 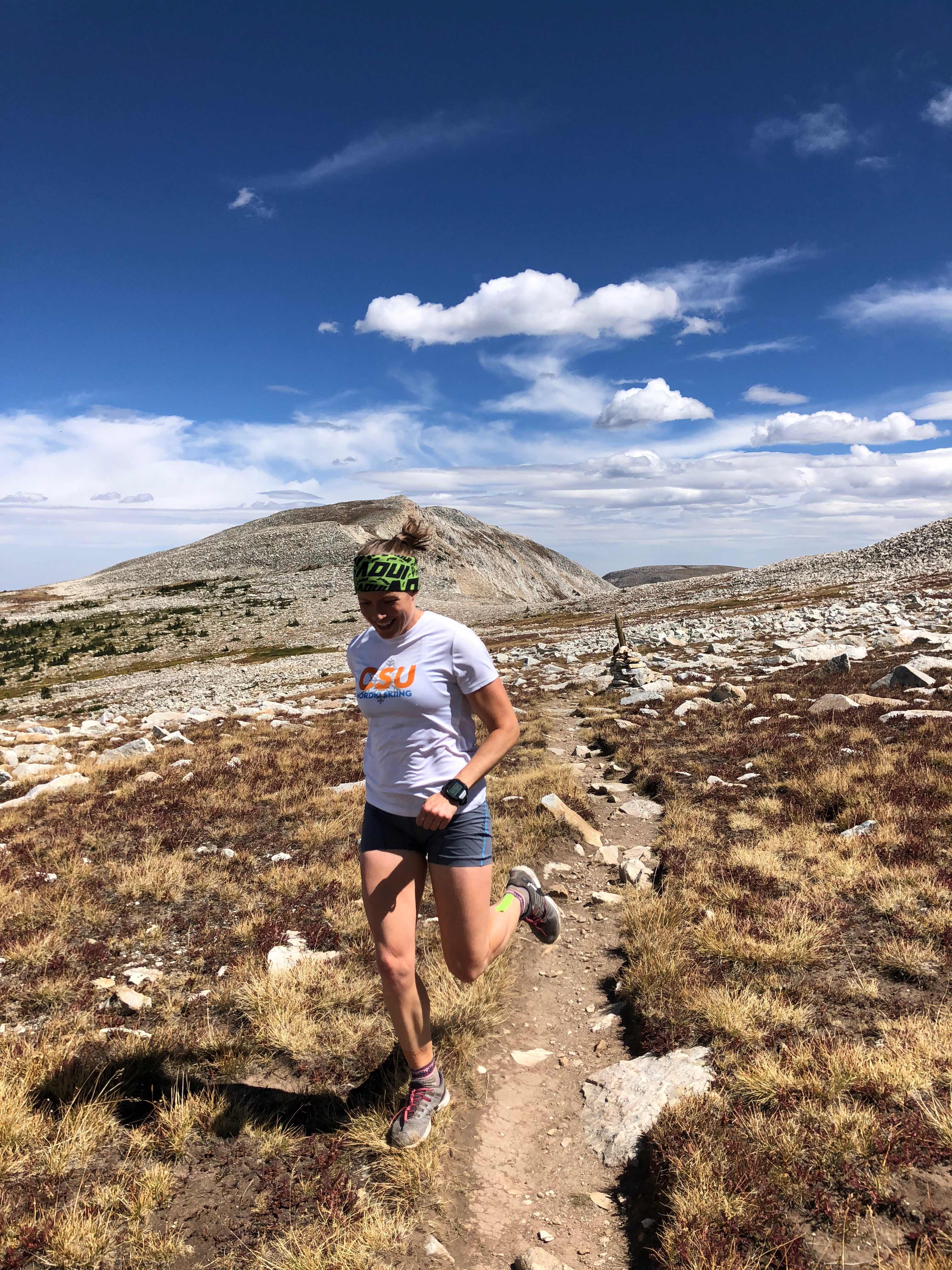 The top of the peak was really cool. It's really the highest thing around, and nothing makes you feel more on top of the world than actually being on top of the world. Quick lunch, and then we headed out along a ridge rock-hopping the top, aiming for the end of the ridge and the next batch of alpine lakes. 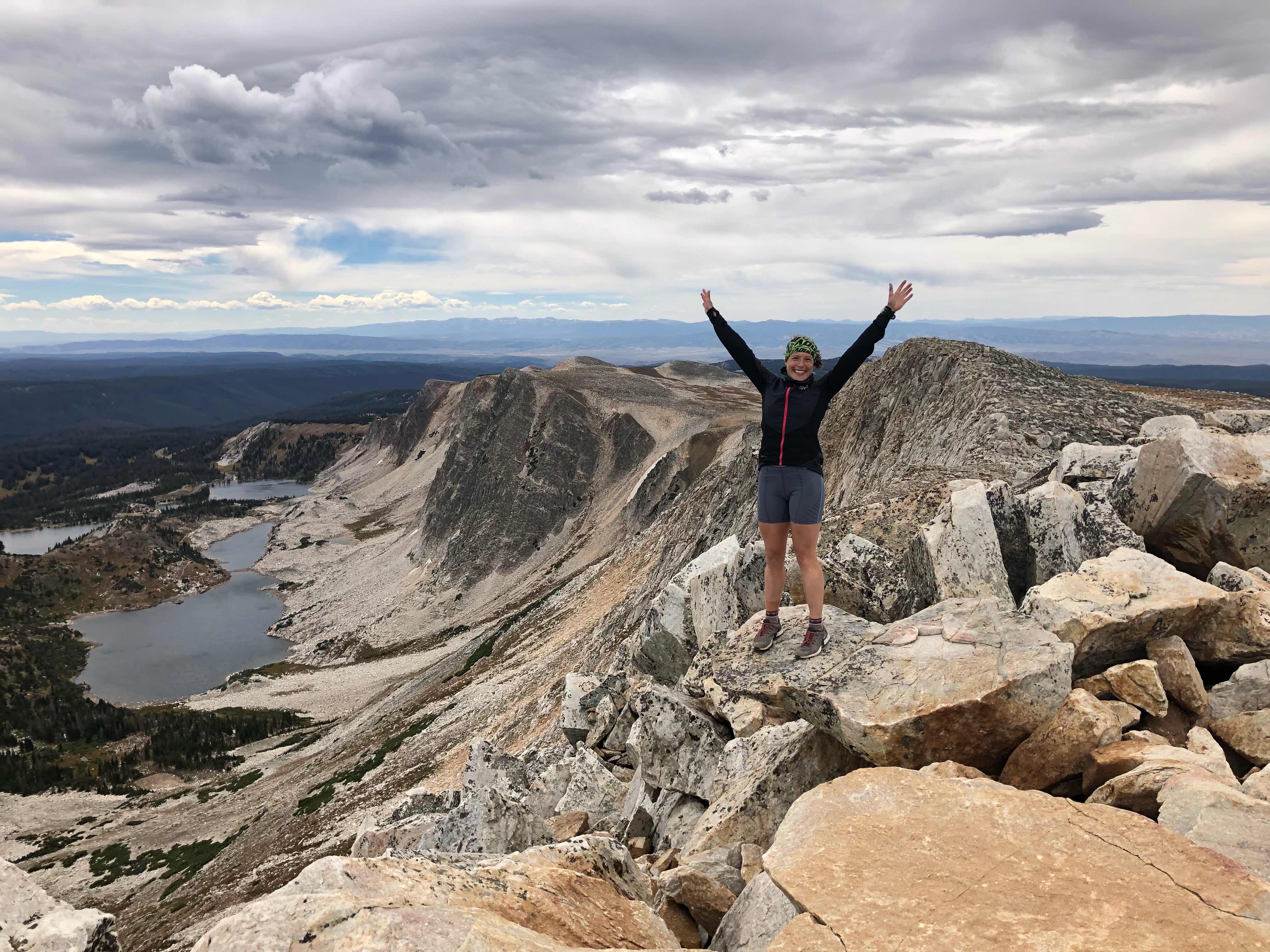 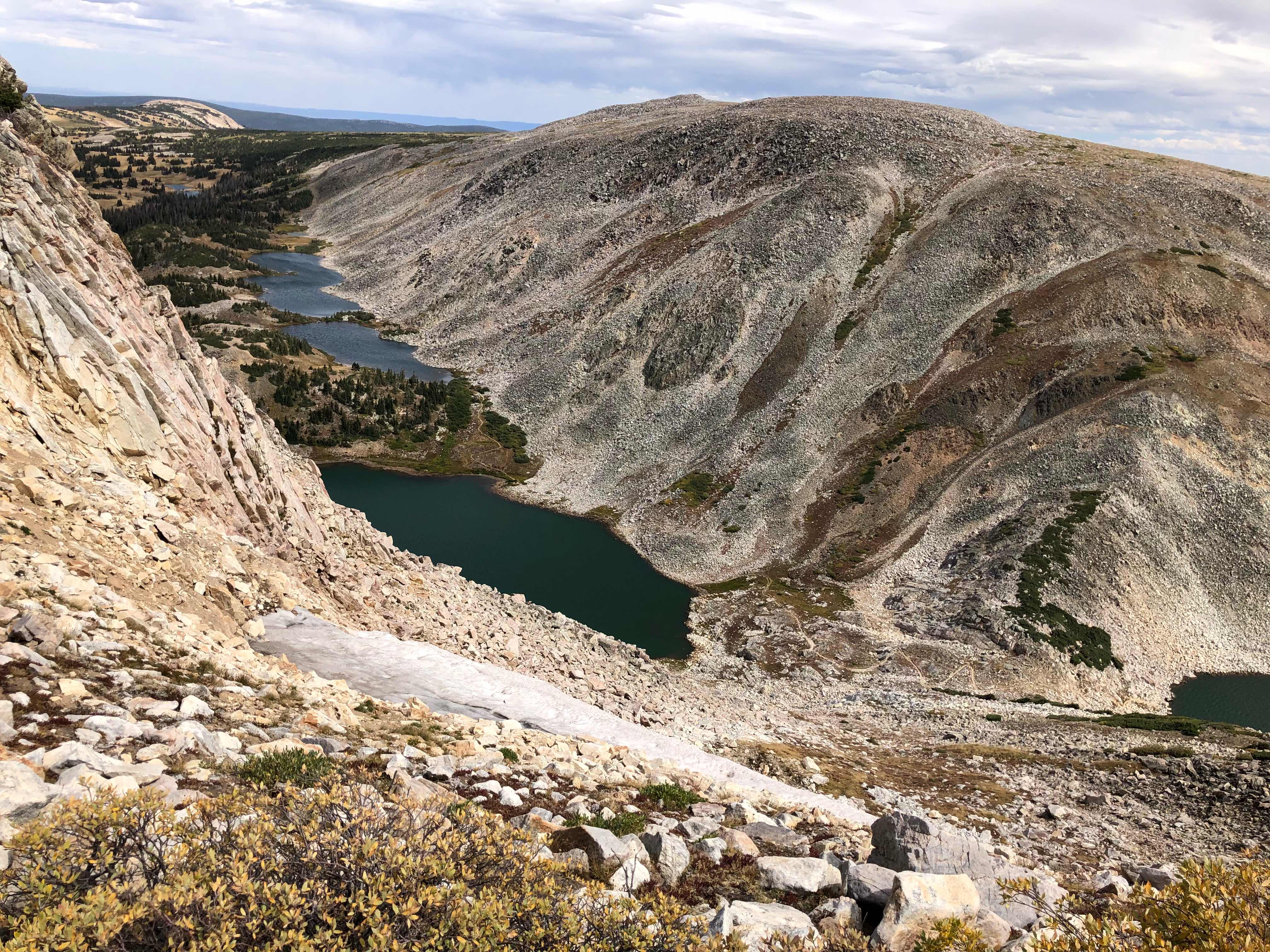 Looking down toward the shelf lakes and Brown's Peak 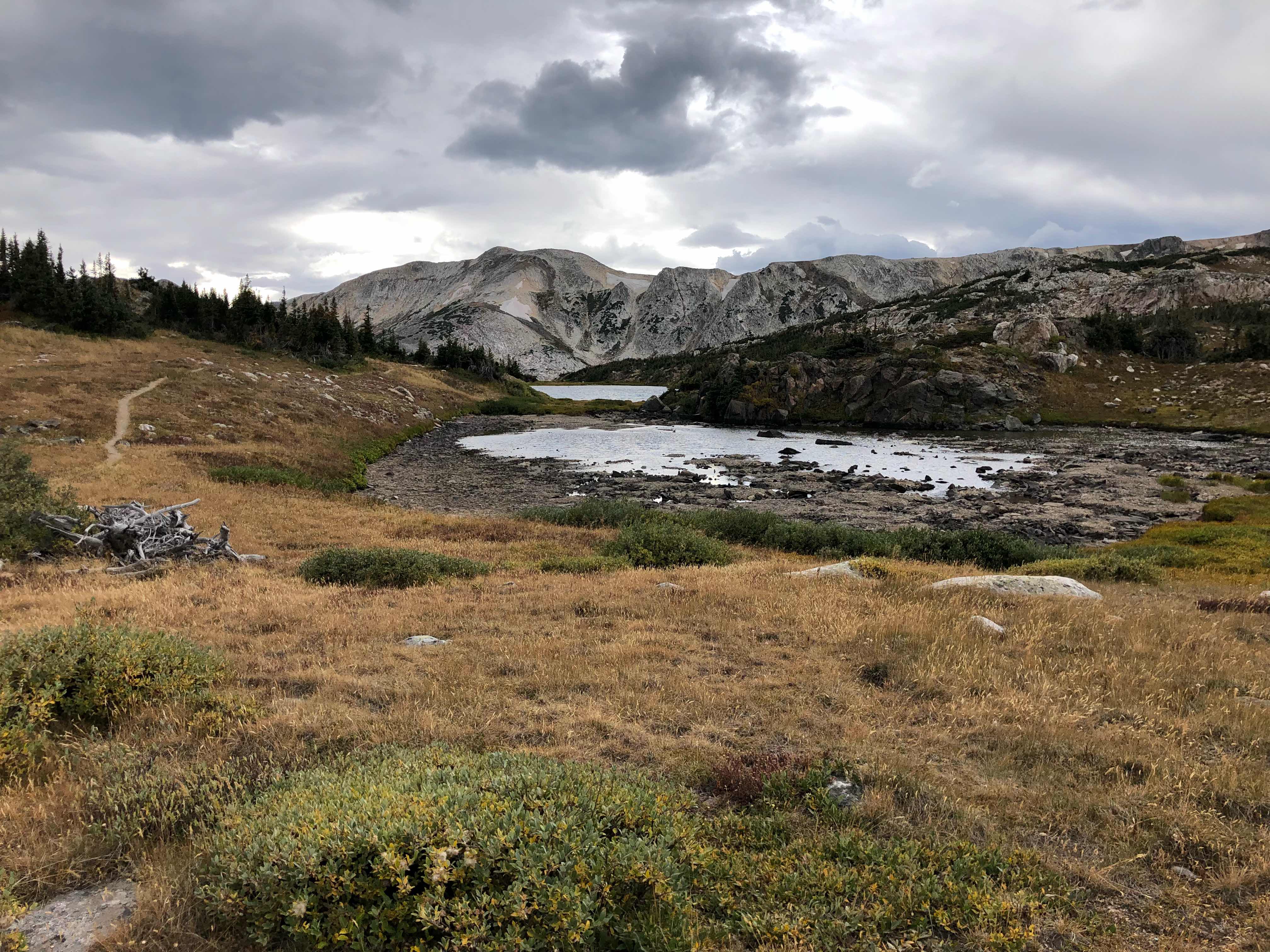 Descended to South Gap Lake, and eventually back up and over Brown's peak, but without a trail. There was a trail marked on the 1980 USGS map, but that was long since disused and disappeared. No problem in this terrain to just bushwhack, though, since everything is so open and accessible. But that did make for some slower miles. 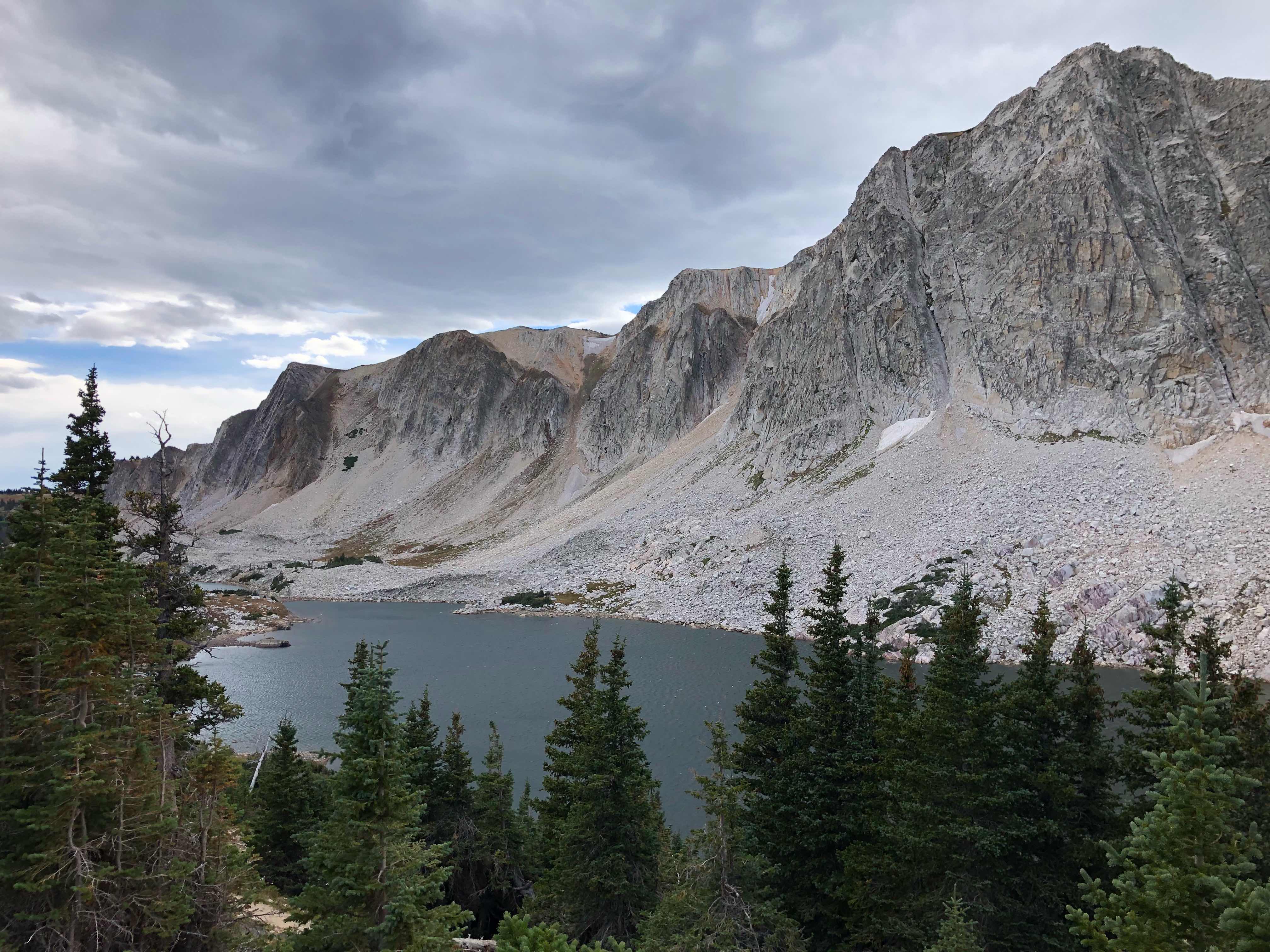 Medicine Bow Peak from the other side, as we trotted down a gorgeous gently-graded footpath back to where we started. A very nice way to finish a long day! 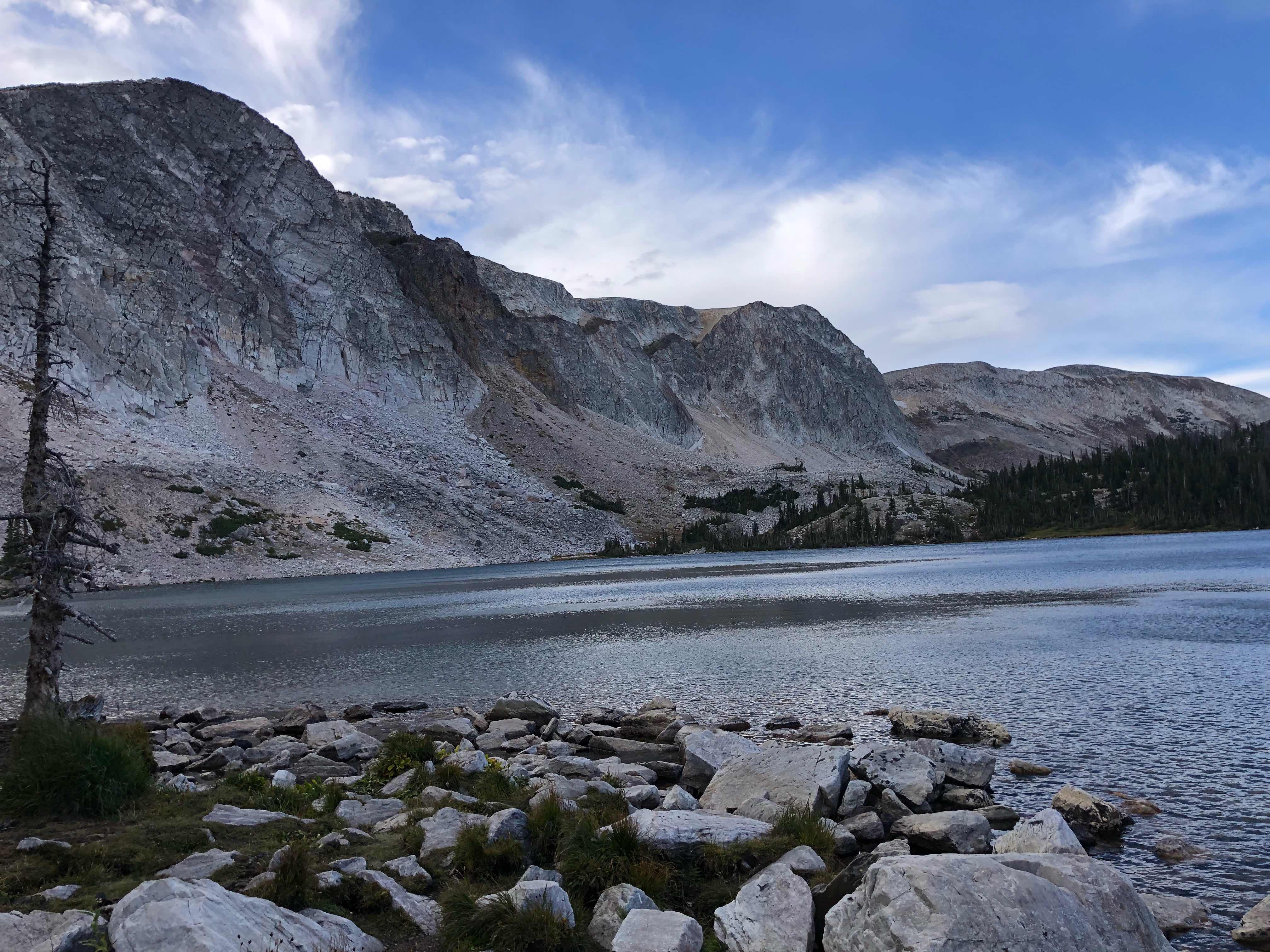 So, while we completely missed the One Cowboy Relay race, our little excursion into the mountains was well worth it.

The next day was the first National Ranking Event race, of which there were four. It was a middle distance course, which meant technical orienteering that would keep us on our toes. I haven't been on a map much this summer, but had a good pre-race plan that kept me finding the controls one after the other. The only thing I regret is that I had none of that elusive flow, where you always know where you're going next and how you'll get there - it was more of a stop, look at map, go, stop kind of race. But, it was good enough for the win! 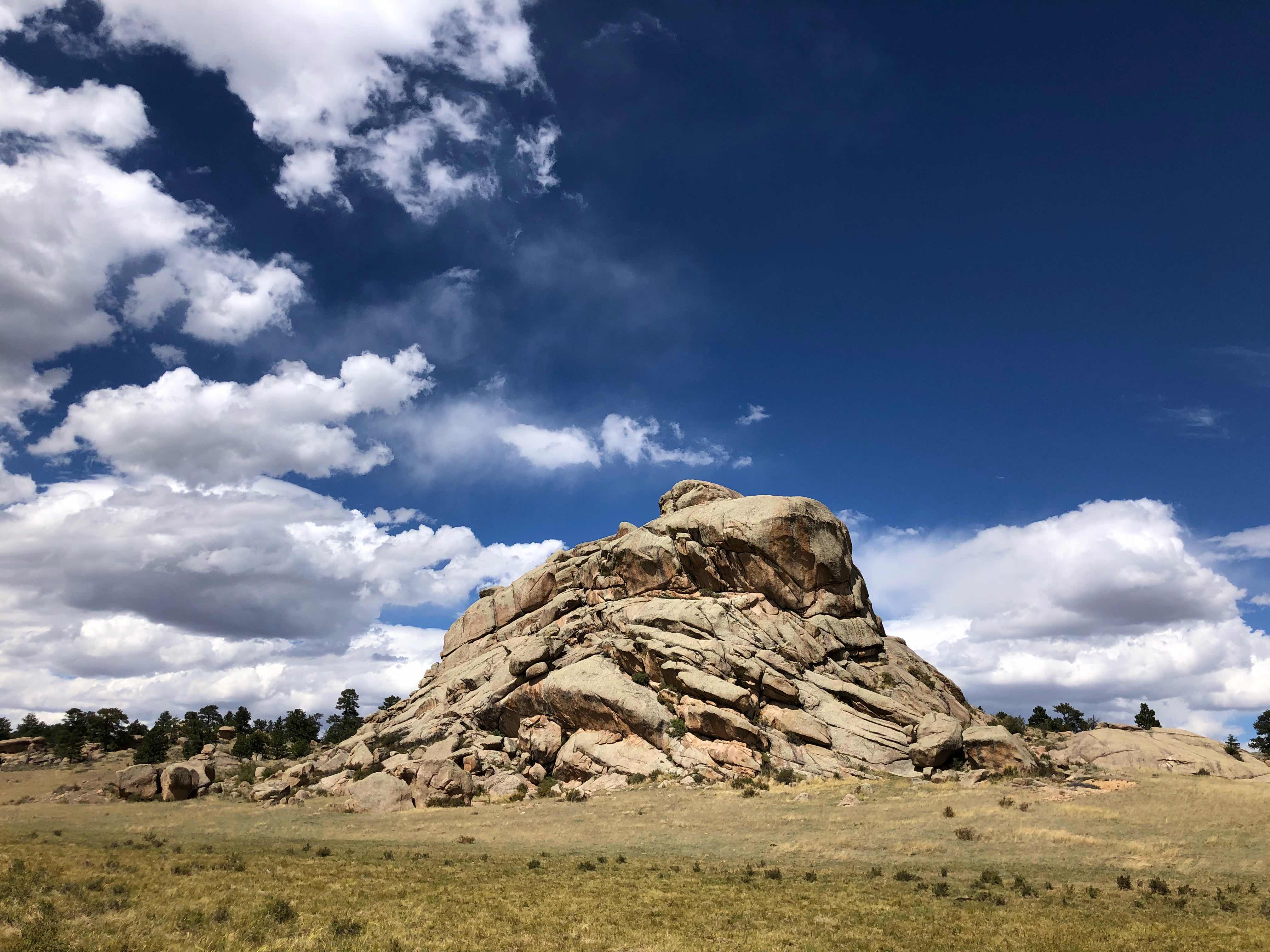 This is a really cool rock up on the plateau. Naturally, Tyra and I went to the top. It's what we do. 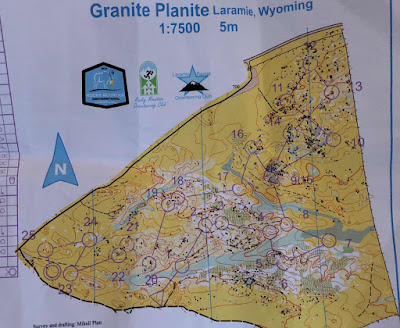 Super fun map, technical without just being a jumble of rocks. Those rocks in the northern bit were really awesome - some big slabs and boulders and all sorts of other rock configurations, that really challenged the orienteer to look beyond the rock to the landforms supporting it all. When done successfully, you could fly, but if you just looked for the right rock in a pile of rocks, that was slow. 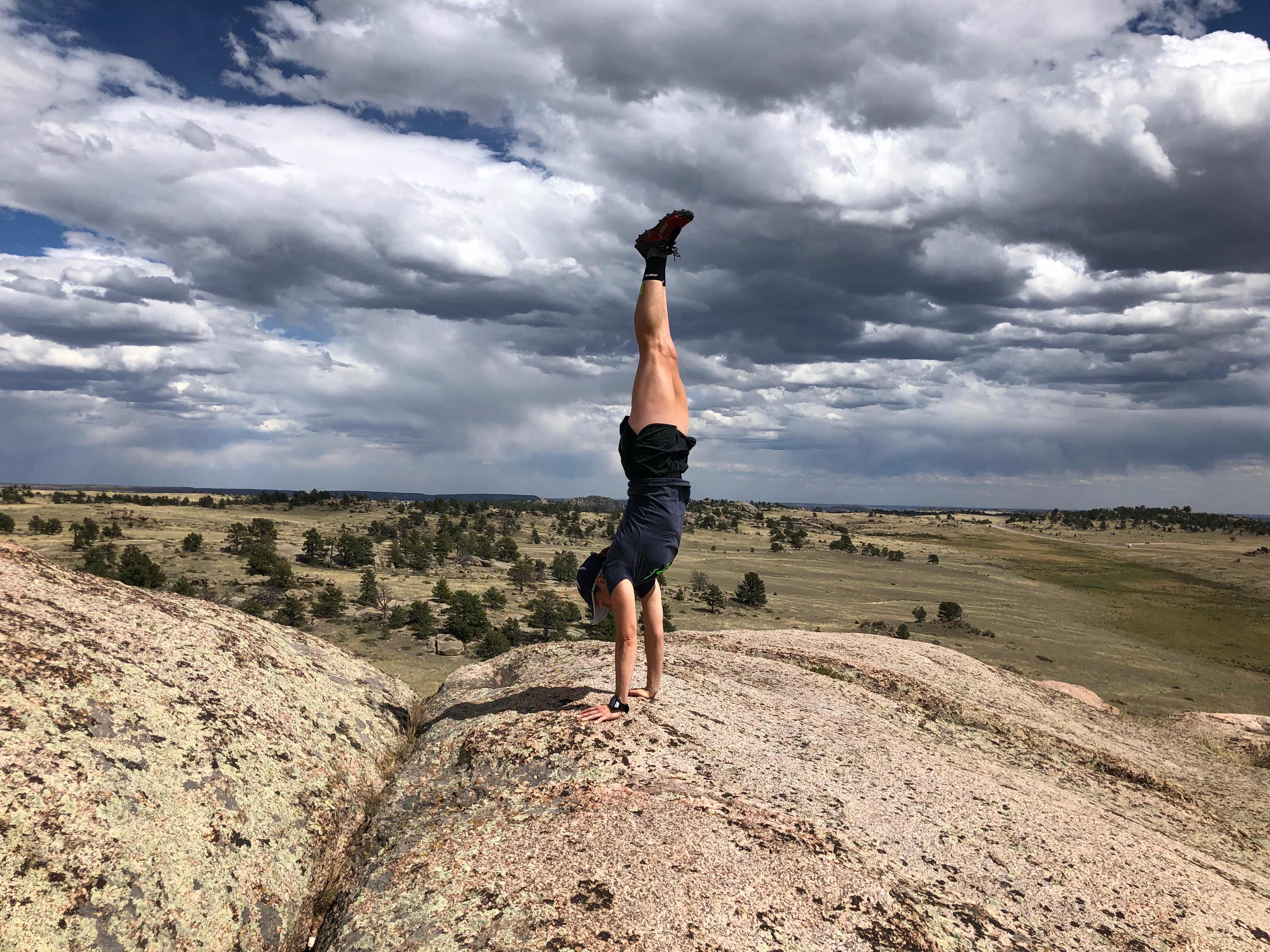 After my success in the middle distance course, I didn't want to get complacent for the following three longer races. The scoring worked such that they'd count your best two of three races, so I figured I may as well start hard and see if I could hold the pace. Day 4, the first longer race, was in a surprisingly technical area. I had been expecting more of the short-grass prairie and fast running from the day before, since we were literally across the street, but there was much more sage and pine forest to contend with. 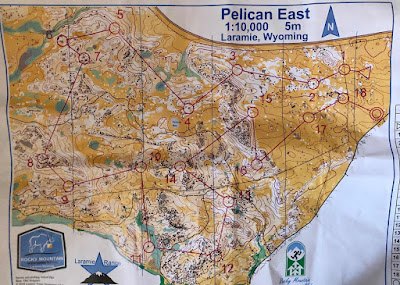 I managed to keep my head screwed on, though, and really pushed the downhills when the opportunity was there, while fighting juuuuust enough on the uphills to keep moving. I was feeling pretty good, considering that we were racing at 8600', but definitely not my normal self up the hills. The sage also made for difficult running - the stalks are really woody, and you have to sort of pick your way between the plants, otherwise you kind of just crash into a bush and get stuck. Overall, I was pleased with both my navigation and my effort, and I ended up winning the women's class by a big margin, and third among the men.

The next day Tyra and I were pre-runners, so that we could go out adventuring later in the day. Unfortunately, I don't think I'd had enough coffee at that point in the morning, or maybe I'd just lost too much energy in the day before, but I put together a really terrible, unfocused, lazy race. 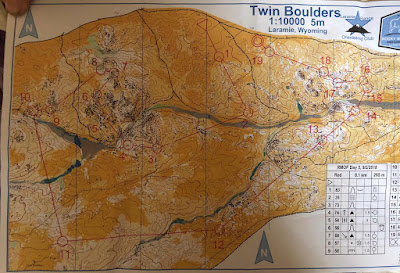 I had good speed on some of the long legs, but I was incredibly unfocused in the circle, and was losing huge gobs of time on each control. In hindsight, I was focusing too much on the pace, and what was happening was that I was taking 2-3 minutes for my heart rate to drop enough for the oxygen to actually be used by my brain for me to find the control. In the end, I made about 10 minutes of errors, and finished about 5 minutes behind Sydney, a newcomer to the US Team, and well back among the men. Even though I know I'm retired from this sport, and thus not allowed to beat myself up, I was upset to have navigated so poorly, especially on such a fun course. 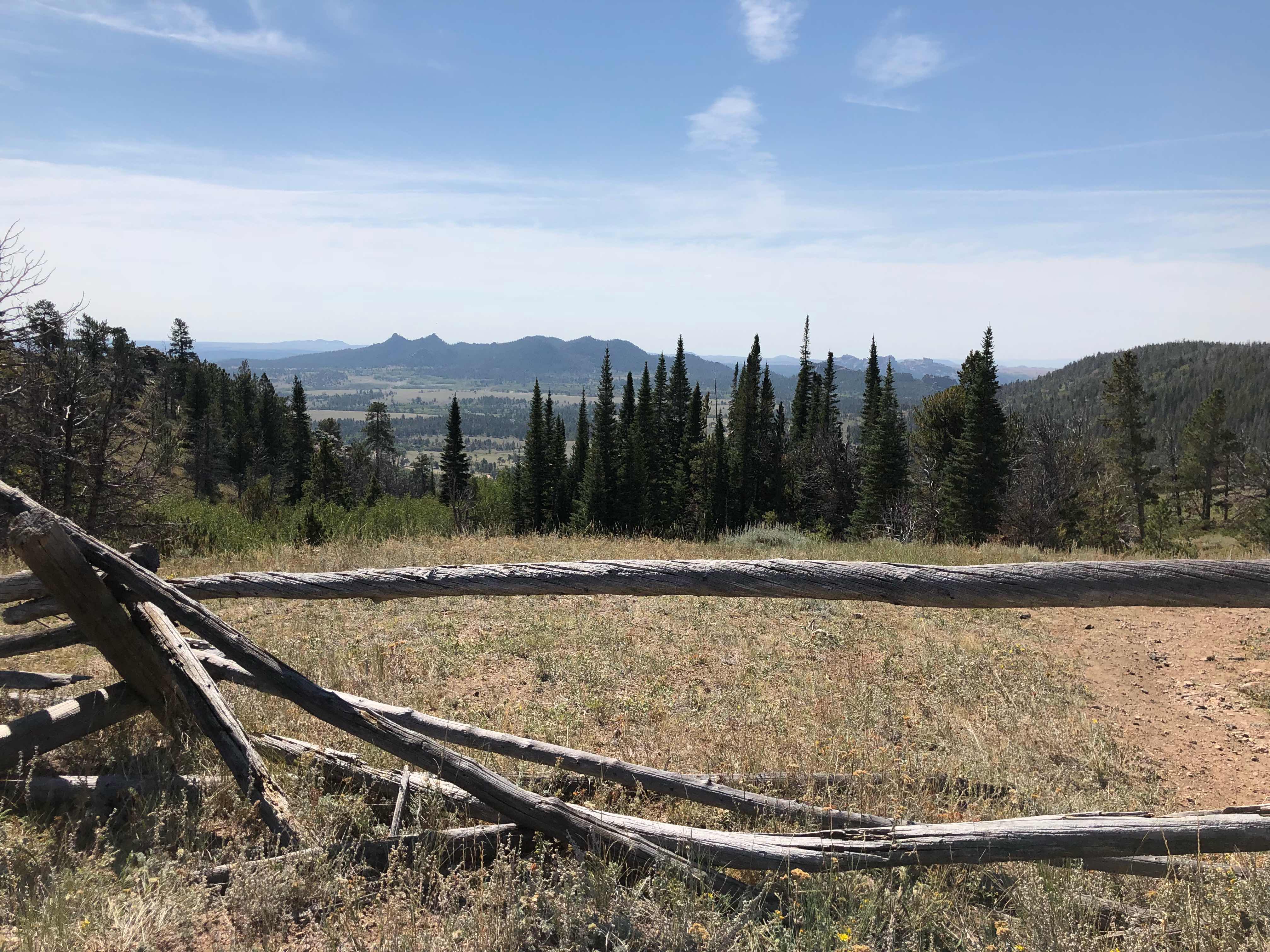 But we went on a small hike after, and that made everything better. This place is just so beautiful. 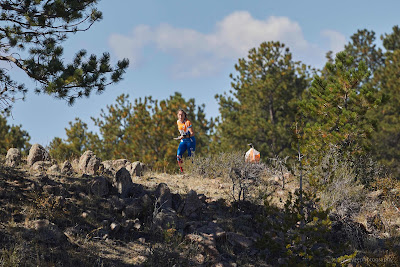 The final race I was determined to be clean, and aggressive with my navigation - always know what's coming! I started 2min behind Tyra, which is of course the preferred position. I watched her off towards 1, which meant I didn't have to read my map for a while, and took a solid 15 seconds out of her right there. I immediately paid for running too fast by crossing the wrong marsh. I thought I'd corrected for that reasonably quickly, but still lost a minute to Tyra in the execution of that leg. Whoops. 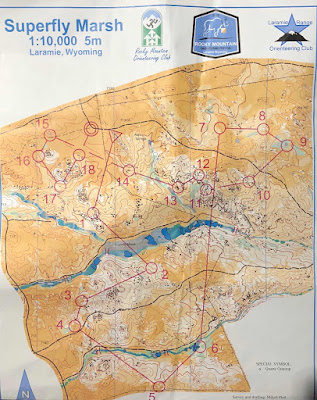 Good execution of a straight-ish route to 3, did a bunch of walking to 4, and then apparently my stick didn't register at 4. Huge bummer, because it beeped for me. Down to the lower trail, and then I made my own crossing of the marsh to 5, which involved waist-deep water with muck underfoot. I was hanging onto trees to keep from sinking into the muck, and then one of them broke off in my hand and luckily I still had momentum to lunge for the next tree. I emerged from the marsh relatively unscathed, and the dry air meant that I didn't stay wet for long.

I re-entered race-mode around control 5. I knew things had been a little wobbly up to that point, and it was time to lay down some faster km. Although I didn't know it at the time, I was in third for the women at control 5, about 20 seconds behind Sydney. But I was in fight mode, and comparing splits after the race, I was taking little bites of time out of each leg, which adds up to a lot if you do it right.

Exiting the technical rock stuff and into the fast stuff, I knew it was time to really get my suffer on. I kept my head up looking for micro-routes through the sage, and up the gradual hill to 15 I could see Tyra's back, but couldn't tell quite what the gap was, or if it was enough. I was pushing pretty much to my limit down the hill to 16-17, and nearly cracked coming over the hill to 18 and the finish, but it was enough - I had the fastest time.

I ended up taking about a minute out of Tyra, but of course it doesn't count, because I don't have a punch for #4. Luckily, I beat Sydney by enough on the first longer race to outweigh how much she beat me by yesterday, so I took the overall win. Winning is fun!

This trip was a ton of fun. Good company, good vibes, good orienteering, good adventuring, good training. Super thanks to RMOC/LROC for all the work that goes in to putting on this event! 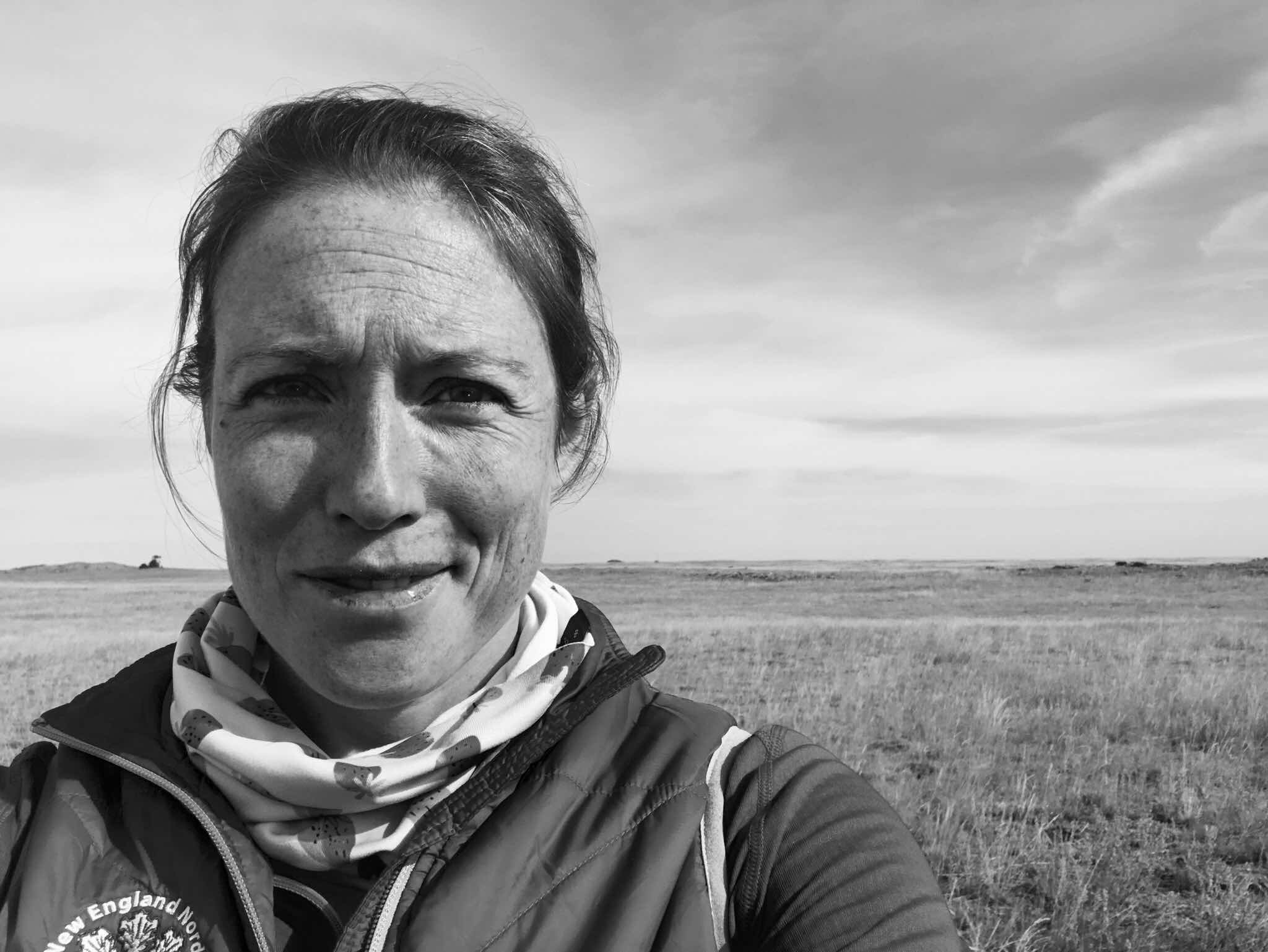 Prairie portraits: me and a goldfish cracker. 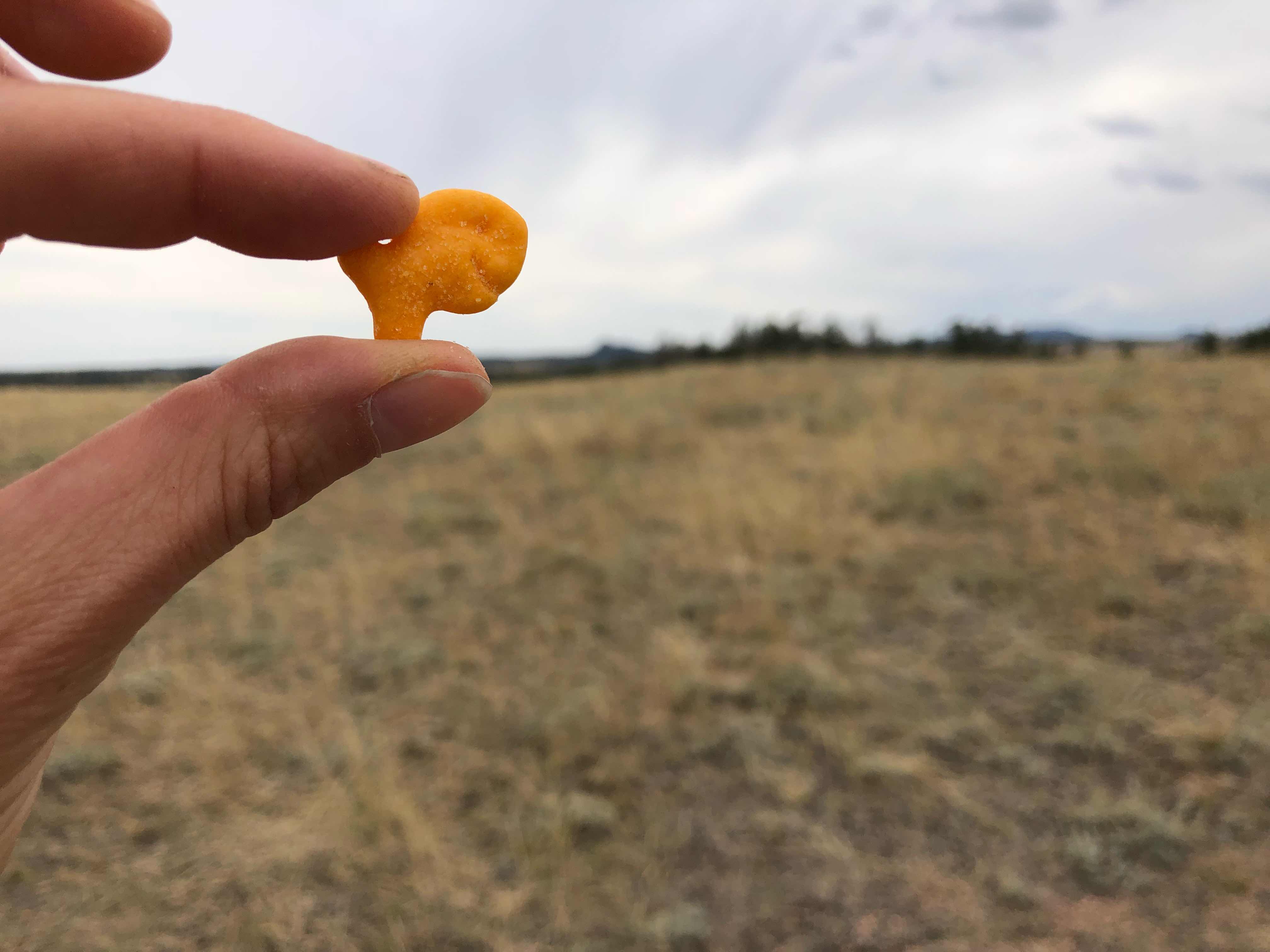 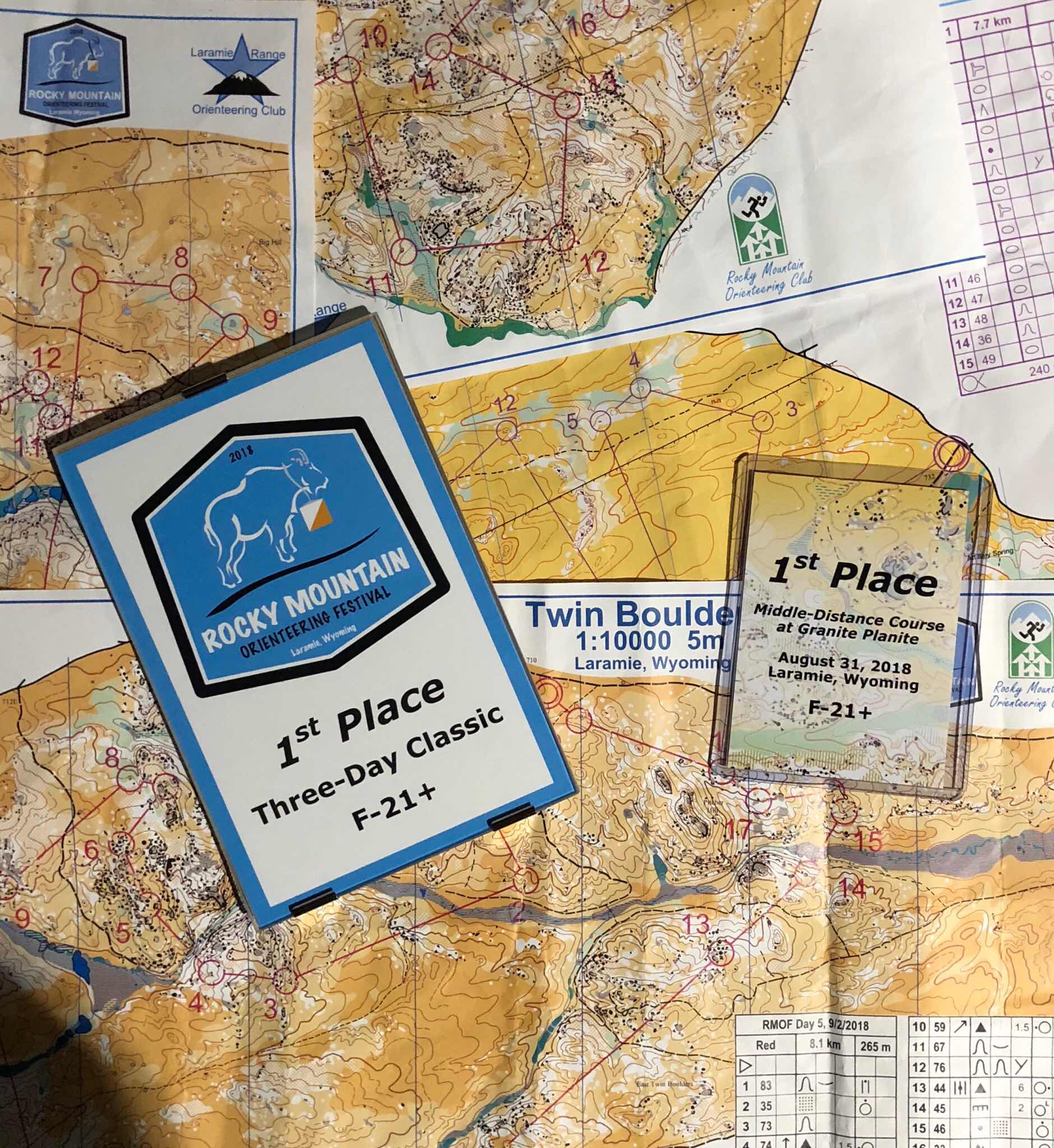 It was a great little vacation out there, and I am so thankful to all the volunteers who made it work. Can't wait for my next chance to orienteer in the Laramie Range!