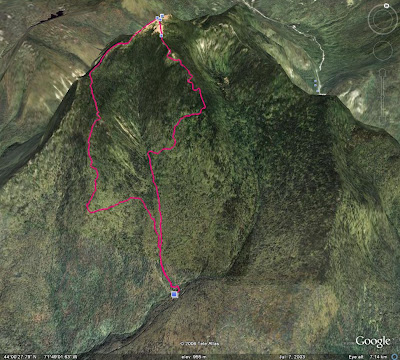 Sunday I convinced Anna that running up a mountain was good for bike training, and we drove up to NH to race up Moosilauke against Dartmouth, Middlebury, GMVS, Burke, and other random stragglers from all over New England. It was supposed to be raining but it ended up being a nice day, in the end. Anna and I started at the end of the pack, with Anna just behind me. I remembered that last year I hadn't gone as hard as I wanted, so my race plan was "go harder". Does that translate to faster? Apparently not... Protip, if you're going to be running uphill for an hour, don't go into the red in the first ten minutes. Yeah, I'm not that pro, I went out too hard, and suffered for it. When Anna went by pretty early on (20 minutes in?), she tried to make me feel better by saying how awesome she was, but of course in a humble, Anna- sort of way.
Me: "uh oh, this isn't a good sign"
Anna: "whats not a good sign?"
Me: "I'm getting passed by a cyclist!"
Anna: "yes, but, a cyclist with a really good VO2max..."
After a period of damage control, I passed the "last water" sign and the trail went up for a bit instead of this gradual up, and I could see glimpses of Anna's gray shirt ahead of me. That kept me somewhat motivated, but the damage had been done and my legs were heavy with lactic acid. Eventually I got above the cloud layer and it was like I was blinded, what is this burning star in the sky??!!? It was a beautiful day for a picnic when I finally staggered up the last hump to the top, 50 seconds slower than last year. Unfortunately I hadn't brought a picnic basket with me. Alas.
Posted by Alex at 3:45 PM