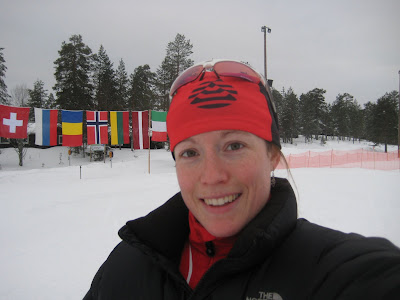 I figured that since I don't have any really good pictures from last week, I'd post some of the random pictures that I took of the gear associated with ski orienteering. There are a bunch of parts, compared to skiing anyway. 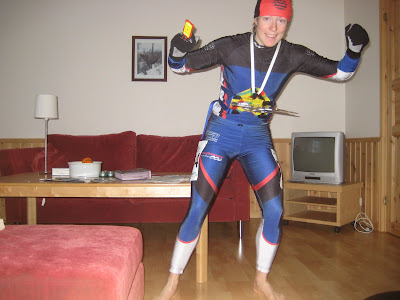 Here is somebody pretending to ski in the living room. Note that she is wearing the mapholder (where the map goes), and has her numbers pinned on. She also has the EMIT punch on her hand. Therefore, she is all set to go. She is, however, missing the skis, boots, and poles, which would help her to go a little faster. 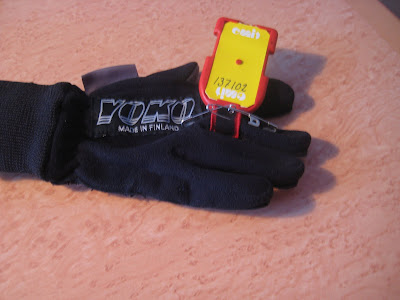 This is the EMIT brick, which is one form of electronic punching. It is not nearly as easy to use as the sportident punches, but unfortunately EMIT gives away a lot of equipment and money, so many competitions use the EMIT system. Problems with EMIT include: it is awkward to ski with, leading to slower punching. It doesn't beep when you punch so you have to watch it closely to make sure that the light on the thingy lights up. It flops around on your hand as you ski. Some of the thingies you punch into don't have lights, so you have no way to know if it registered as punching. The backup system involves that little piece of yellow paper, which means that you have to fit the brick completely into its puncher doohickey if you want the backup (which you do), although it will read at somewhere between 1-5cm away. Basically, it sucked. I missed having sportident (which attaches to your finger and just acts like another finger that you poke into a hole). Because of the flopping action of the EMIT brick, I had six safety pins in it. I generally lost between 2-3 pins each race. Maybe they just weren't good pins. 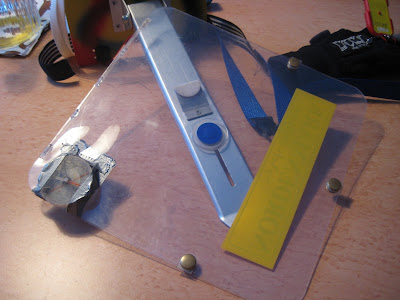 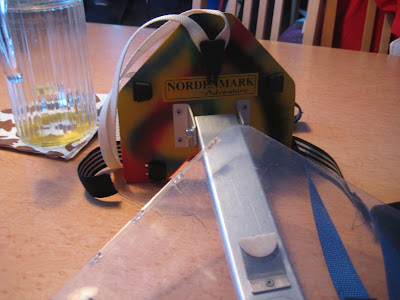 This is the mapholder. The map goes between two sheets of clear plastic, which stick out from your abdomen. The top layer of plastic lifts up, as a hinge, and there are little snaps to snap it shut. The metal bar connecting to the colorful part (which rests against your stomach) lifts up and down, so you can angle your map however you want it. I have a compass duct-taped to the top of the mapholder, which is less than ideal, because it can cover part of the map and I hardly use a compass anyway. 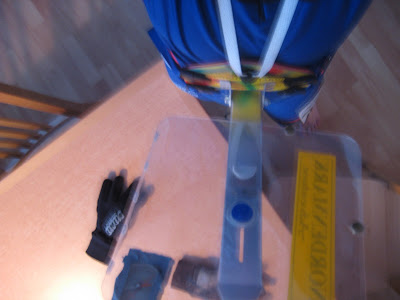 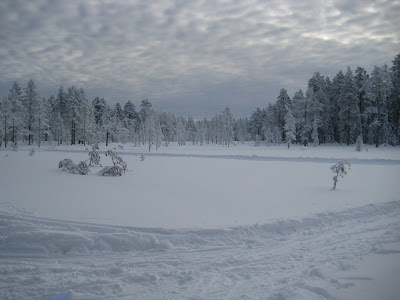 These are some of the narrow trails on Swedish marshes. The marshes are nice to ski on, because they are perfectly flat. The trails can get pretty tracked up, as you can see, but because its so flat you can go really fast just double poling. I liked skiing on the marshes. 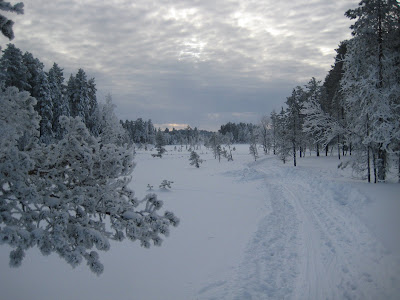 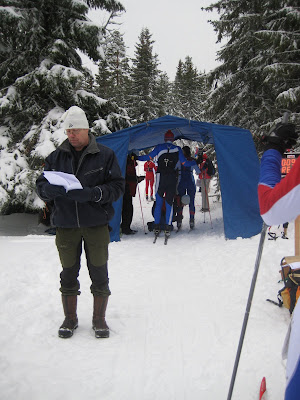 This is the start box. First the guy in front checks that you are who you are. Then you go into the tent and they strap an electronic timing chip to your ankle. Then you go out of the tent and they clear the past data from your EMIT brick and check it against a control. Then you stand on a line until they tell you to pick up your map. Then you pick up your map, put it in the mapholder, and try to figure out where you are and where you're going (depending on the race, 15-60s to do this). Then they say go, and you start skiing. Hopefully in the right direction...
Posted by Alex at 9:35 PM