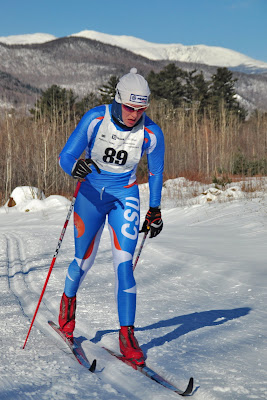 The one-day club championships for NENSA took place, like it does every year, at the Jackson 30km classic race. This year they put the course up over the "wave", an awesome downhill that has a bunch of whoop-de-dos and a couple corners that are just tight enough to keep you on your toes. Of course, what goes down must come up, so there is a fairly big climb to get to the top of the wave, but luckily it was designed by John Morton (or at least edited by him), so the trail skis really well, with a lot of rollers and some bits of recovery. The rest of the 30k course consisted of double poling through golf courses, which, when you didn't start rollerskiing until September and didn't double pole until November, isn't great news. Luckily, I was pretty good at faking it, thanks to fast skis. The course was also shortened, from 30k to 26, which definitely worked in my favor. Since everyone starts all together in this race, no men's wave and women's wave, my race plan was to go out hard with a bunch of guys, hope all the girls were behind me, and just ski with the guys and hope to not get dropped. Forget pacing, it's over-rated!

The morning dawned clear and cold, but not nearly as frigid as predicted - I don't think it dropped to the -6F it was supposed to, and this meant that the temperature was actually pretty comfortable for racing. Waxing had the potential to be a bit tricky since the tracks in the fields were all windblown and powdery, and not only is windblown powder wicked slow, nothing kicks in it. Luckily, all the climbs were in the woods, and the tracks were rock solid and beautiful under the trees. My skis were close to perfect. I could have used a smidge more kick, but that could also just be that lack of arm strength talking - I never slipped, but I did herringbone some things that I should have strode.

I seeded myself about where the other women had seeded themselves, and when we started moving I quickly jumped out of the tracks and onto the icy crust between them, double poling aggressively up towards the front. We did a parade lap around the golf course, and by the end of this I was basically behind Rob Bradlee, which means I was near the front of the race. I knew that when we started climbing, I'd lose this position quickly, in fact, I didn't really want to be as far up as I was, but the icy crust combined with fast skis was letting me double pole with the guys at no real extra effort. We did more loops around the golf course on the other side of the road, and then started up the Yodel trail, and I quickly discovered that I was paying for those fast skis - I couldn't stride up the steeper stuff in the tracks, and was herringboning far more than I should have. Sigh. A group of guys went past, and I made no move to match their speed - I knew that I was double poling faster relative to my climbing speed, and I didn't really feel the need to blow up just yet. 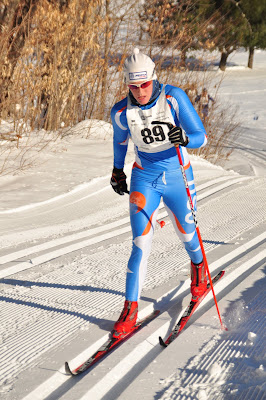 We crossed the second road onto the Eagle Mountain golf course, and got more loopty-loops on that field. Luckily for those loops I was hanging out behind a tall guy drafting, doing a fair bit of kick double pole, and mostly just feeling like I was out for a relaxed ski. It was an absolutely gorgeous day - blue sky, blue wax, the best sort of combination there is. I made a goal to myself right then that no matter how I did in the race, I was going to truly enjoy the day of skiing, because there was nowhere else I'd want to be.

Then the golf course ended and we started up the Wave, and my focus narrowed down quickly, as I was herringboning and jogging again, losing the group of guys I'd been drafting. Another group caught me as we skied through the fields and caught some views of Mt. Washington, and I hung out behind them as we entered the woods and started climbing again. I couldn't go right behind them stride for stride, because they were all big tall guys with a powerful kick, and I'm just little Alex with a quick light tempo, but I kept them in sight, and just kept chugging away up the hill - nothing majestic about my skiing, but it was working. We finally turned the corner up top and headed into the wave, and I wish I'd gotten a chance to ski that downhill before the race - it was a bit terrifying because it was so fast, the corners were so icy, and I had no idea what was coming. There is one little bump where you catch air, and as you're airborne, the trail turns, so you have to be pretty nimble to change direction quickly once you hit ground again.

I enjoyed the roller coaster ride, and as we popped out of the woods back onto the golf course, I discovered I'd made contact with my group of guys again, but they were spread out. A couple klicks of double poling, and I'd passed four of them back. There was one section of trail that was pretty low on snow, it was bumpy and had a couple potholes and rocks, but it just reminded me of skiing at Harriet Hollister, makes you ski with finesse. Back up to the fields, and more endless double poling, but this time no tall guys to draft. I was still enjoying the day of skiing, but starting to wonder how much longer it was going to take. Into the Wave, and by this point I was lapping skiers who were still on their first lap of the Wave, so there was much more switching tracks - made the downhills really exciting! I was getting tired by this point, but I made a pact with myself that I wouldn't stop running, even when I really wanted to take a break when herringboning. The downhill was much more fun the second time, because I knew what to expect, and I took it right at the edge of control, the best way to ski downhills. I could see three guys from my pack spread out in front of me, but for all my efforts, I couldn't latch back on.

My double poling muscles were pretty pooped at this point, so I was doing a lot of kick double poling, which my striding muscles weren't all that pleased about either. At turns and corners, I could see someone making up time on me, and I couldn't tell if it was a guy or a girl, so I kept the pedal down and motored for the finish. Luckily, it was a guy, because after descending the Yodel trail, he caught me in the fields, and I'm not sure if I'd have wanted a sprint at that point. I meant to sprint him for the finish, but I had neglected to read the course map closely enough, and I thought we still had to cross the road and do a lap of the golf course before finishing, so I was really confused when I crossed a red line in the snow and all the people in front of me were standing around blocking the way. Race brain. Anyway, brain fart aside, I ended up winning the race for the women, so it appears that my race plan of just starting fast and seeing what would happen, worked!

There was a delicious lunch served to racers afterwards, and CSU had a ton of age-class winners, so everyone was in high spirits. I won a shirt in the raffle, and CSU won the overall title (I think... there seem to be some strange ways of counting points, so maybe we didn't win. I like the story better when we won). That was fun, but I'm glad I'm not doing Craftsbury this year... 26km was long enough!

Thanks to Jamie for the photos!
Posted by Alex at 12:24 PM