US Sprint/Middle/Long Champs: the race report

If I were smart, I wouldn't try to race while also in a managerial role, but we all know that I'm not very smart. So, I signed up to race all three days, since that is three more A-meet days to add to my ranking, plus a WRE - very cool stuff! The sprint was really the only day where I felt good, physically, but I thought maybe I could get away with not feeling so awesome, and still managing a good result. That didn't actually happen, not so surprisingly.

The sprint was super interesting. There was some fast fields-running, but a lot of very technical thinking in the woods - yes, you could run on trails, but you really had to keep track of where you were. I made a bunch of mistakes, not to mention all the hesitations, but still came through in 6th, good enough for third place US and a medal! Ali was almost 3 minutes ahead of me, and she had made mistakes, too. 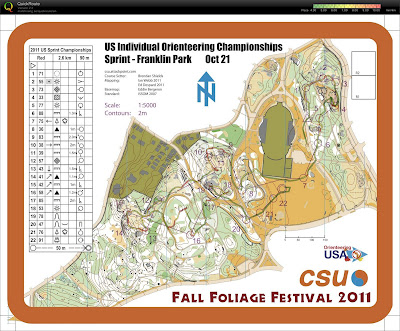 After all the heavy lifting that evening, I tried to pretend that I was feeling fresh for the middle, but somehow my brain didn't believe me. It was another super interesting course, that made great use of the little bits of nice forest. Again, it was very technical, with low visibility, but I really enjoyed the course. I was being pretty cautious in the beginning, trying not to lose time through mistakes, but balancing not losing time through being too hesitant. I lost some time on 5 and 6, maybe a minute total, but I was starting to really flow by the time I hit 7-9. After making another mistake on 11, Carol Ross, our favorite Canadian, caught up to me from four minutes back, and we started racing pretty hard head-to-head. That's my favorite kind of orienteering! 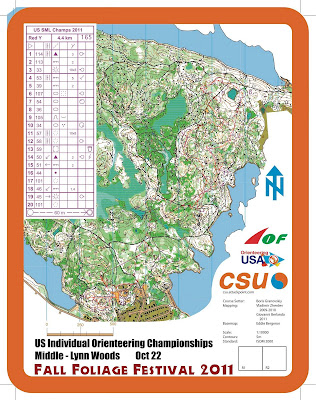 We finally parted ways on the way to 15 - I saw the smarter southern route, and picked up a minute over Carol just by doing that. I knew it was smart, and was trying to push the pace, hoping to drop her enough to beat her in the results, but then I went and totally goofed on 18, and ended up almost 10 minutes out of the lead. This time I was 9th overall, and fifth American, so no more medals for me.
Splits. 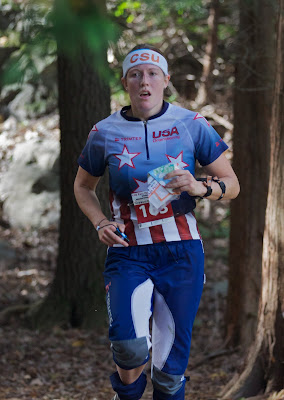 Dave Yee was taking more photos today, and caught some of me during my race. One of my gaiters fell down, which, aside from causing a lot of pain when running through brambles, is a serious fashion faux-pas. Gasp. 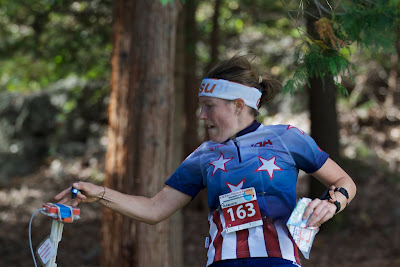 Coming in for the finish punch clearly requires a lot of concentration. 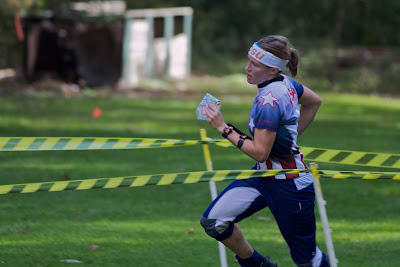 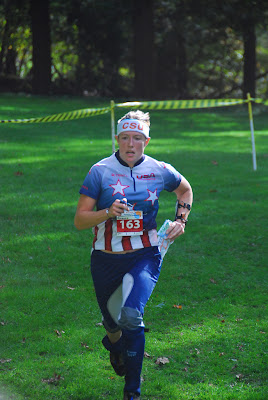 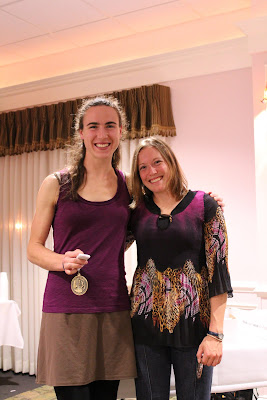 The banquet Saturday night went over well, and Ali and I gave out awards. Sunday dawned way too early, and aside from freezing my toes off, the morning set-up went well, and I found myself on the third start line for the weekend. I knew there would be a lot of trail running today, given the nature of the Fells, so I was trying to be prepared to run fast. Unfortunately, it turns out my body just didn't have much to give in the face of running fast, and there were many moments where my brain really wanted my legs to be moving a little faster. I suppose that's the crux of sports. Want to go faster, but can't.

I still managed to make mistakes - nearly 9 minutes of mistakes - and that kind of disappoints me. Because if I had felt like I wanted to go faster, then I damn well should have made sure the orienteering was as perfect as it could be. I caught up to Tori Borish fairly early on, and I kept trying to drop her, which wasn't actually a good plan, because it meant that for two controls in a row, I was a complete goofmuppet. Eventually I found that pesky control #12, and I was PISSED. Ali had caught up to me (from eight minutes back or some such ridiculousness), but I outran her to both control 13 and 14. Either because I orienteer better when I'm really mad at myself, or because I orienteer better when I'm racing someone head-to-head, not sure. Unfortunately, a long trail run followed control 14, and I lost Ali pretty quickly.

Starting around 18 it became a slog; I couldn't drop Tori, and I just couldn't make myself go any faster. I totally blew #22, but managed to hold it together to come in 7th, 4th American, and just two minutes out of the medals. Hardly a good race, but given the circumstances, entirely acceptable. The last four nights, I've averaged 9.5hrs of sleep. It's been glorious. 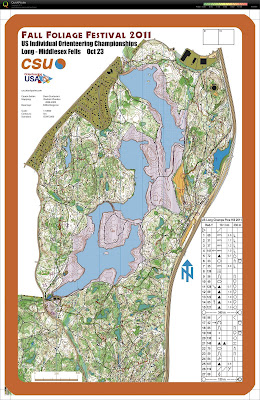 The route from Sunday's long race. The straight-line distance was 10.x km, and I ended up running 13.7. I guess that's a long time to be running. I hadn't thought to bring any gels, so I put some candy corn in a little baggy and stuffed that down my sports bra - it turns out, candy corn melts. And is very difficult to chew, mid-race. Just fyi.
Posted by Alex at 3:25 PM