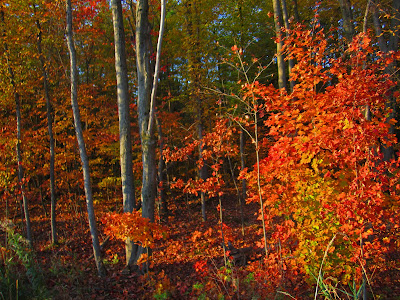 The mountain bike race I was slated to do last weekend got postponed to this past weekend, and I had already made plans for a road trip to Canada, so I managed to weasel my way out of the bike race, after all. Ali, Becky, Rob (Becky's boyfriend) and I piled into my car, and we headed north, with our passports this time, for a long weekend of Canadian orienteering. I also got the chance to see Ottawa a bit, pretty much for the first time, as Nevin and Will took us around on a tour.

The racing was fast and furious, with a really competitive women's field. Ali managed the overall win, also winning the middle and the sprint, and I ended up 3rd overall, although both Becky and Katarina Smith would have been ahead of me if they had also done the sprint. The event was very well organized, and the weather cooperated with brilliant foliage and pleasant temperatures - better for spectating than racing, as it really felt like summer out there.

We were staying with the Teutsch family, as we did last summer for the Canadian O' Champs, and as ever it was a really wonderful blast of organized chaos. Three kids, a dog, a cat, a bird, three bunnies, a couple fish, and seven houseguests... Anne didn't ever look ruffled, it was unbelievable! The Teutsch's were great hosts, and since Anne and Eric were basically in charge of the meet, they also ran a really great meet.

We were on the same maps as last summer, and that was a good thing, as I had some vengeance I wanted to wreak upon that terrain! Last year hadn't gone so well for me, and I was ready to bring it this time 'round. The weekend started off with a middle distance, at the Hidden Meadows XC ski place. Map below. This went pretty well for me - I was never stupendously fast, but I was going along pretty accurately, and relatively smoothly, too. However, I couldn't last the entire race, and I ran off the map on the way to the last control. Luckily that only cost me three minutes, give or take 30s, but it was still frustrating to mar an otherwise good race with a silly mistake! Ah well, it's all a learning process I suppose.
Results. 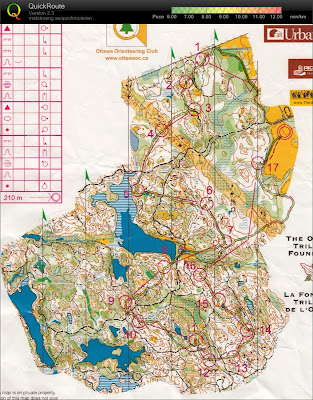 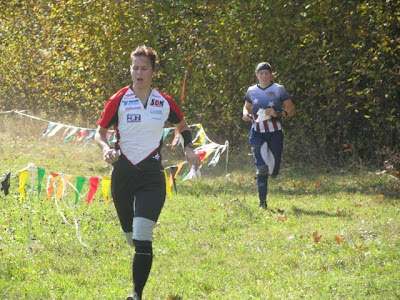 Chasing down Katarina Smith into the finish. Stefan Bergstrom photo. 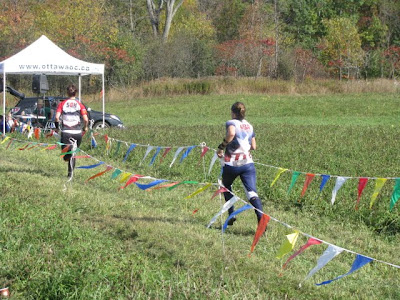 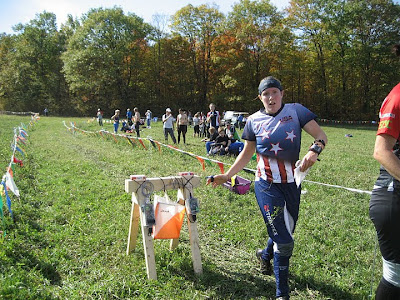 We didn't get much of a break before it was time for the sprint race, at Beaver Brook development center. The course was an interesting mix of very fast open suburban-type areas, and middle-distance-esque complicated forest. I found it difficult to change gears between top speed and something more sustainable for thinking, but managed to make it through probably less than a minute total of errors. This was good enough for third, 54 seconds behind Ali, who won by 1 second. But the heat was definitely getting to my stomach, and I spent a good while after the race curled up in a little ball wishing I were more hydrated. 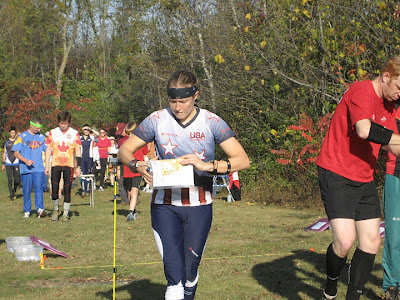 Starting out the sprint. Punch the start and flip the map, then go go go! Photo courtesy of Andrew Cornett. 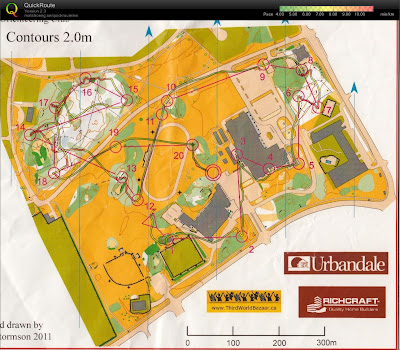 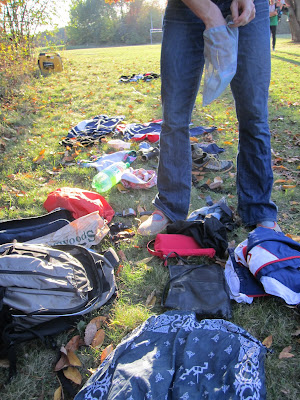 
Sunday it was time to attack the beavers. The terrain at the Eco Wellness Center is like a series of linear lakes and beaver ponds, all criss-crossed with beaver dams and very thin passageways, with lots of bare rock between the lakes. It is basically a barrens terrain, and very cool to run on! I started two minutes in front of Becky, so I sort of figured I'd see her out there, but I didn't expect her to catch me as soon as she did; right around control #3. I discovered that I could keep up, and actually out-run her at times, so for a while we were having a great head-to-head race, until I made a massive blunder on my way to 5, and took forever to correct from that. You can see the route below - I basically missed the control, because I can't count to two, and thought that I was crossing the first lake when I was actually crossing the second. I then proceeded to be a doofus for 10 minutes while my heartrate lowered, until I could finally get myself out of my own mess.

After that I was on my own, and things were going pretty well, except for the massive blister developing under my left toes. It caused an onset of wimpiness syndrome, and I definitely slowed down in the second half of the course. Overall, though, if we ignore control 5, it was a very good race! Results. 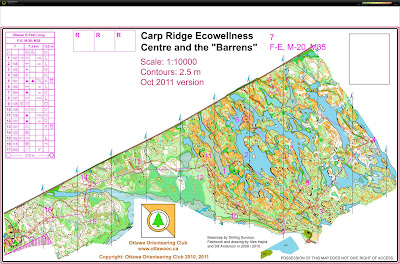 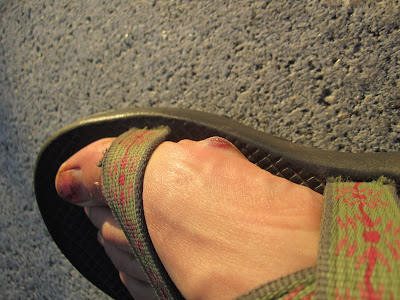 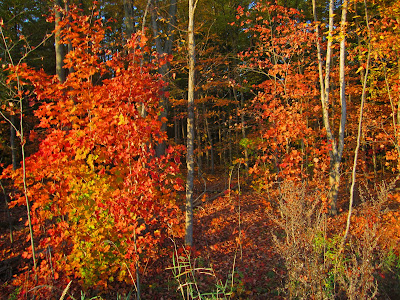 Fall foliage! The leaves were out in full force, it was beautiful. Harder to find orange controls, though... 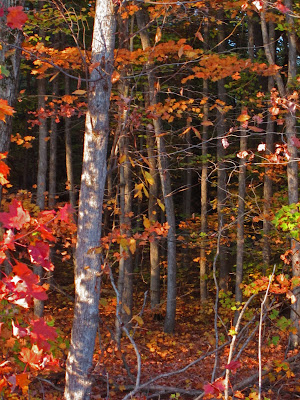 After the race, we headed into Ottawa for a look around. The light was beautiful, sideways afternoon light on a golden fall day, so I took a bunch of photos. 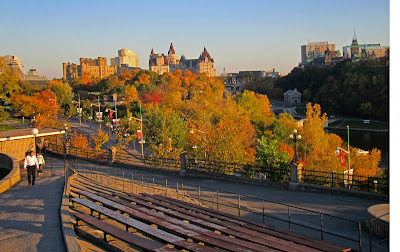 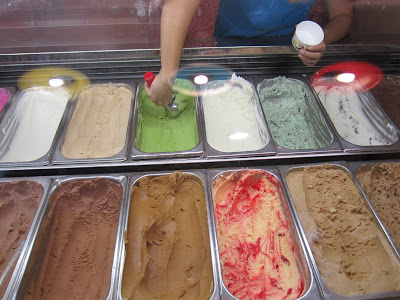 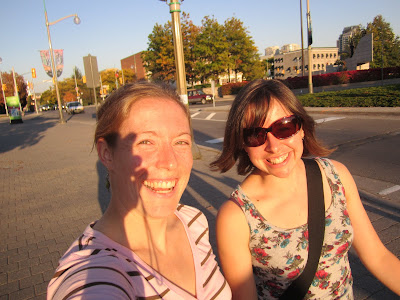 Becky and me on our wander. 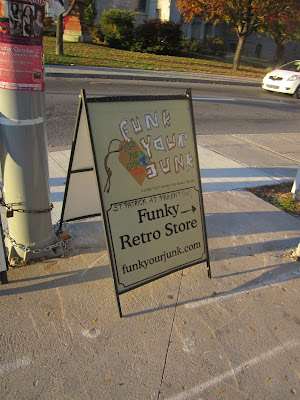 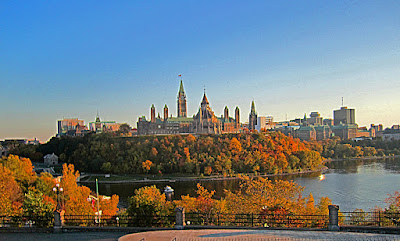 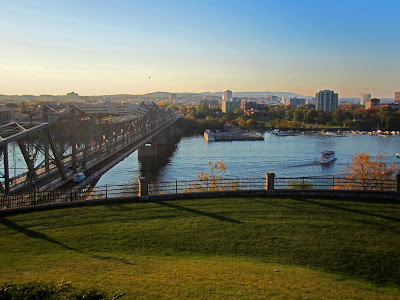 Looking north, toward the Gattineau hills. 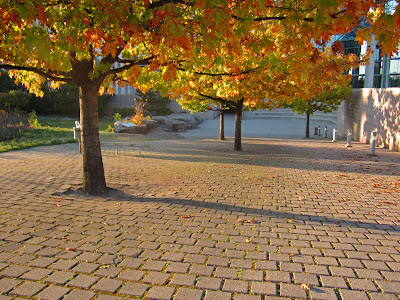 Maple trees everywhere! I liked this city, it had trees and grass and stuff in it. 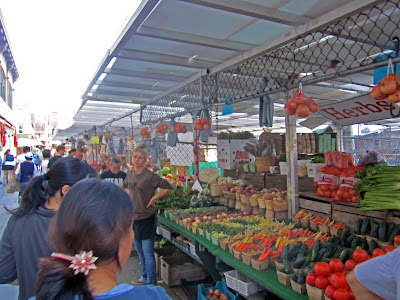 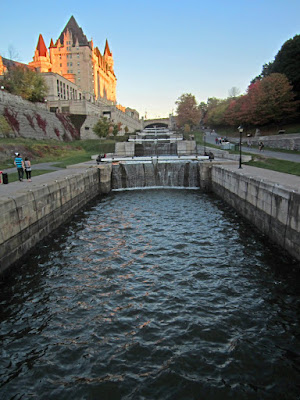 Looking up over locks. 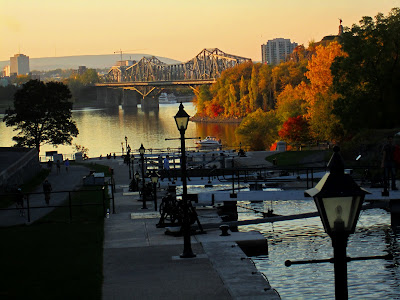 Looking down over locks. 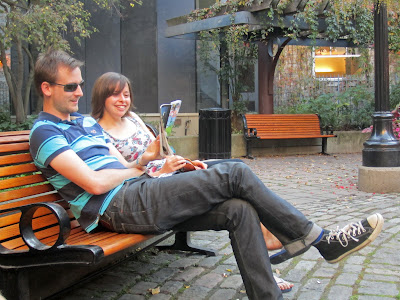 The last day was a two-person relay, so Ali and I teamed up as "Team Giggles". I was pretty tired by this point, and didn't race as well as I would have liked, but it was a nice end to the weekend. We won the women's division, but there weren't too many women's teams. 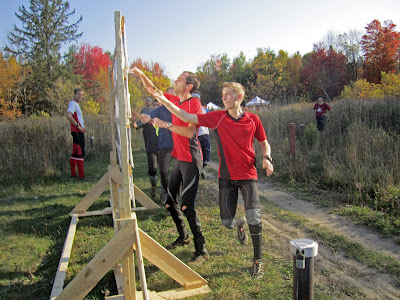 Alex Bergstrom grabs his map, first off the line. He and Alex Teutsch were racing for "Team Alex", and so I felt a connection to them, even though they beat us. 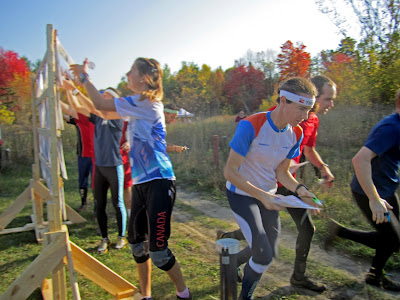 Ali grabs her map, just ahead of Molly Kemp.
Posted by Alex at 11:51 AM