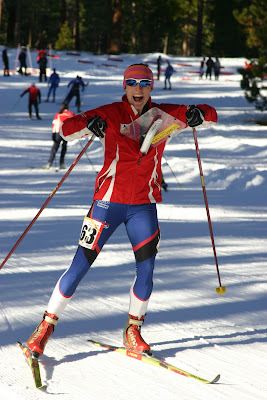 By Wednesday morning, I could make it up a flight of stairs without hanging over the railing and gasping for breath, so I figured that the race was probably going to feel a little easier. Wednesday was the sprint distance, at Auburn Ski Club, with a shortest-skiable-distance of 4.8km. With a winning time of 12 minutes, it would go by quickly.
I started behind a Finn and in front of a Czech, and watched the direction the Finn took out of the start, so I could ski a little further without too much thought. I don't know if the GPS will continue to show up at this link, but I was wearing a GPS transponder, for live tracking, along with most of the other women. Don't mess up, because everyone at home can see it! The start beeper beeped, I flipped my map, and off I went.
Despite a few less than ideal routes, my navigation ended up going really well. This may actually be one of my best navigational races I've ever done, and every control was exactly where I wanted it to be. I attacked the hills with lots of oomph, but I think I may have coasted a bit too much on the flats and downhills, and especially near the end, I didn't have much speed to show for the amount of oomph I was applying. It was a little disappointing to finish where I did given how I felt about my race, but it was still a fine result, and skiing a clean race felt wonderful.
Eddie was out taking lots of photos, all the below shots are from him. 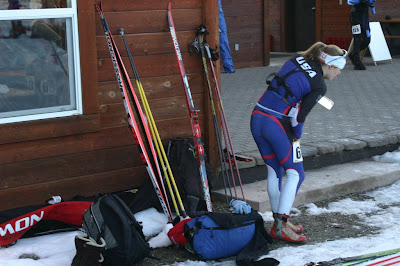 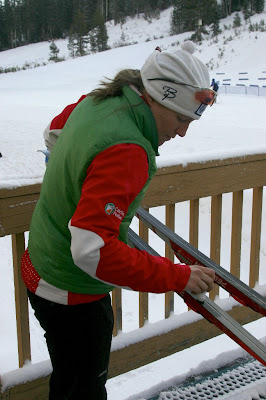 Ski waxing is serious business. Not having a wax bench = not so pro. But the skis were fast! 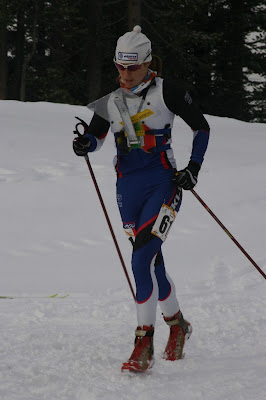 Ski orienteering depends on competitors not knowing the terrain beforehand, and also that they don't find out information about the course from people who have already finished. Thus, they put you in a "quarantine" zone until you start, and there is no communication to the outside world from there. It is usually a very small area, which means you have to get pretty creative about your warmup. Good thing I'm a pro at ski walking! 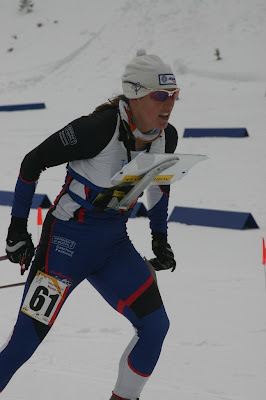 The finish: phase I. 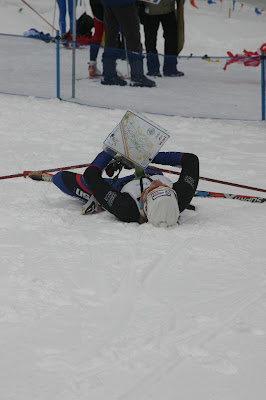 The finish: phase II.
Hey, did you know - it's really hard to breathe at this altitude? 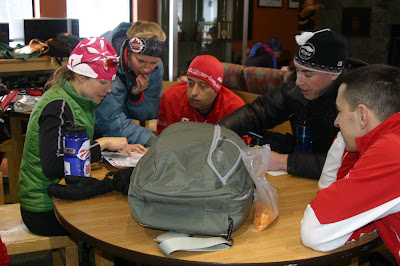 Followed by much discussion of routes, splits, and and mistakes.
Sprint results.
Thursday was a middle distance event, at Tahoe City XC area. Middle distance races are usually much more technical, in terms of the navigation, and this one promised much less climb than the long and sprint races, so I was really excited. 55% of the skiing would be on narrow trails, which usually makes for more technical skiing, in terms of staying on your feet. Basically, middle distances races are super duper fun.
I started relatively early, while the snow was still quite firm and icy. Awesome! Speed! However, I quickly found myself outskiing my brain, and messed up in multiple places. Never a huge mistake, but think of how hard it is to make up 45 seconds in a ski race - you don't want to blow that much time if you can help it. Despite making numerous small mistakes, there were large stretches of the race where I really felt in control, channeling the flow, and was just having a wonderful time out there. That was, of course, until the last control - I got confused as I came down a sweet downhill, and tried to make a shortcut to the correct trail. However, instead of ending up on top of the crust, my ski tips went under the crust, and I faceplanted, hard, in front of a bunch of guys with cameras. I'd say this was the low point of my day, because then I couldn't even see my map because it was covered in snow. Arrrgh!
In the end, I placed 13th again. I guess I'd expected to be lower in the results, given my little bobbles all over the place, but other people must also have been making mistakes. More World Cup points, and another >1000 point race, for WRE points - exciting! I'm now ranked 38th in the world, and hopefully can get even higher after two more WRE races over the weekend. Sweet stuff.
IOF ranking page.
Middle Distance results. 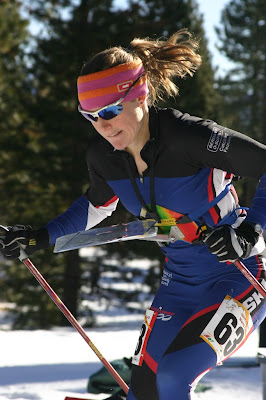 Out of the start. More Eddie Bergeron photos. 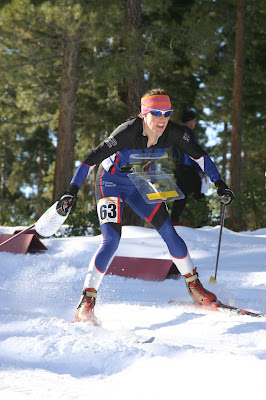 Coming into the map exchange. I hesitated before putting this up there, but everyone else was attempting to snowplow to a stop, too. Rough conditions. Definitely some rocks hidden in that snow. You can see I've already pulled out the old map, and there was some terrified volunteer waiting at the bottom of the hill with a new map.
Tomorrow is a mixed-gender sprint relay, also at Tahoe City XC, and I'm teamed up with Nikolay Nachev, one of our US Team men. Each skier does three loops, for six total laps. Should be fast and furious, I can't wait!
Posted by Alex at 10:38 PM