CSU hosted the Kearsarge rollerski race for the third year in a row (fourth year? I've lost track), and I ran out of excuses to avoid it, so headed north to join my juniors for a sufferfest.  The road starts out brutally steep, but after a mile and a half or so, it flattens out a bit, and alternates between flattish and gradually up for the rest of the climb.  Driving up ahead of time, I told myself I'd be V2ing a lot of the flatter pitches, but it turned out all I could do was wobble my way up in V1.  Damn.

I didn't get quite enough warmup, thanks to driving up the road for some recon ahead of time, and combined with being a little tired going in, and starting a tad too hard, my calf totally blew to pieces pretty quickly.  I think I also had some residual knots in there from last weekend's four races in three days, so it was just a bad set-up.  If I were a smarter person, I would have skipped the race, but we all know how good I am about not starting races.  Or dropping out of races when things go to hell.  I haven't had an episode this bad since the Mt. Washington ski race that was on the heels of a soft skate marathon, two years ago. Today, after stopping, it took about 10min before I could push off my toes again. This may have been the worst I've ever had my calf go. I hope it never does this again. I'd contemplated dropping out of the race, but there was nowhere to go but up, so I just kept going as fast as I could. At least the good news was that I could bend my ankle, so kept my weight forward, but I couldn't glide, and it hurt, a lot.  Did I mention that it hurt?  No?  My leg really, really, REALLY fucking hurt.  I still don't know why I push through these things.

I ended up just over a minute slower than 2010, though calf blow-up aside, in 2010 I was coming off two weeks basically off due to some bandages on my butt and a bum knee, and this year I'm coming off a 4-race weekend and a 14h week. So I'm not too concerned with the slow time, and actually, I'm psyched that I could move that quickly when in that much pain. I did a few visual checks of my left leg, and I was able to hold a decent body position/ankle flex, it just hurt a lot. So at least I was still getting some free glide.

I spent most of the first half, the terribly steep part, wondering if my calf would get over itself and hurt less, trailing behind Hank. I actually did the first mile ~20s faster than 2010, which adds some weight to my started-too-fast theory, but I didn't feel that I could slow down much without coming to a stop. The next mile was a little flatter, and Bob Burnham caught and passed me as I tried to double pole my calf back to happiness. It didn't work; it's like the pain came from simply trying to glide on that foot, so double poling didn't really reduce the pain at all. Since that didn't work to reduce the pain, I tried to put it out of my head and attempted to V2 harder. Lost my 20s back to 2010 in the second mile.

The third mile I was mostly alone, though I could still see Hank, and I knew his younger sister, Meg, was behind me by not that much. That kept me moving, and though I got close to him on some of the climbing, I just couldn't glide well enough to move on the flats, and he kept his lead. Lost another 20s in that mile. Then lost 40s in the last 0.4mi. Wimp. 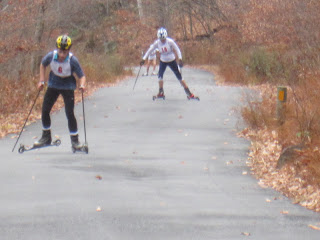 I'm frustrated - I'd thought that I was staying on top of my calf problems with massage and rolling, and the last massage, on Friday, had removed a ton of knots. I guess I'll have to back off training for a bit until my massaging can catch up to my self-inflicted bodily harm.

I'm not good at backing off, though... 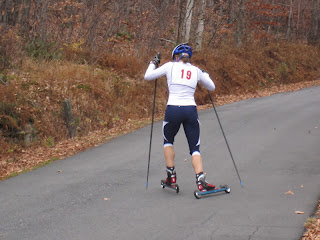 technique falls to shit on long uphills, apparently... at least I was gliding.  Love the new Madshus boots!
Posted by Alex at 1:13 PM