Raid the Hammer bills itself as Ontario's toughest running race, the first race in Salomon's Dontgetlost Adventure Running Series.  Naturally, with a tagline like that, I wanted to do it.  I convinced Ali that she wanted to join me, because it would be partway between Ohio and Boston, but then we realized that we needed a third teammate.  I wanted it to remain an all-girls team, so tried to get my first choice teammate, Jess Snyder, onto the team, but she already had plans that weekend.  Wracking my brains for who would make an awesome teammate (I should mention that I like being the weakest link in a team, because then I know exactly how hard we can push, so I wanted to find someone faster than me), I suddenly remembered that Amy Lane does all sorts of ultra running and adventure type races, so she was probably crazy enough to join us.  I shot her an email to feel things out, and apparently, nobody had ever recruited her before as "extra female body who can run fast".  I thought that happened all the time!  The two major skills we had to have Amy brush up on were her orienteering, and, more importantly, her giggling.  You can't be on Team Giggles if you aren't giggly!

Luckily, Amy got very good at both giggling and orienteering in a short period of time - she lives in the Amherst area, so between Peter, Phil, and myself, we had her doing a bunch of orienteering training sessions.  Given that her father is the president of the New England Orienteering Club, she does know how to orienteer, but was a bit rusty.  Raid the Hammer is slightly different than most adventure races, because there is a section where teams are allowed to split up in order to get a set of controls in the most efficient manner possible, so it pays to have three runners who can navigate.  They call this "the matrix".  Other than the matrix, there were some sections where you had to visit controls in order, some sections where you had to follow a certain trail that was marked on the map, and some sections where you could get controls in any order, but your team had to stay together.

So, Saturday night found us in Hamilton, Ontario, actually staying at the home of one of the race organizers - Mike and Starr were incredibly generous in offering us a meal and a place to stay, and it was awesome to have a friendly home to be in, instead of some cold hotel room somewhere.  I went to bed a little apprehensive - knowing you're the weakest link on a team does leave you hoping you won't slow people down.  But, the day dawned bright and beautiful, and I was super excited to go for a long run in the woods! 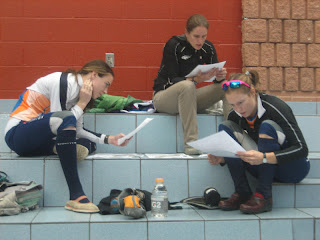 Planning routes and strategeries after getting our maps.

Map 1: Mt. Nemo:
The first part was to get N1-N4, in any order, with the team all together. We checked out the forest on our way to #1, and it looked beautiful and open, so we went with the shortest-distance plan, as opposed to the use-more-trails plan, and hit N1, N2, N3, and N4 in order and with no bobbles. Ali and I were talking out our navigation as much as possible, and one was leading the other was backing up/checking things off and planning the next leg.

The next section was the matrix, and this was where we were the most nervous. Amy is a totally competent orange-level orienteer, so sending her off to A was fine, but I was a little apprehensive that she might make a big mistake. I got B, but had misread the cliffy thing by it, expecting a hill instead of a pit. Luckily I caught myself quickly, but that was unnerving, especially given how much time we'd had to study the map beforehand. Ali got C. I was back first, then Ali after a few minutes, and less than 5 minutes for Amy to get back. Phew!

Then off to S1 and S2, and a trail/road run to the next map. Slight bobble on S2, but otherwise fine. I took a gel on the road heading to the next hill (45min in), and my stomach wasn't super happy with the downhill that followed; too much bouncing. I guess it doesn't help that I was already in L4 on that road... oops. Beautiful views of both Toronto and Hamilton as we ran down the road. What a day for a run!

Map 2, Brant Hills:
This map was entirely colored green, so we were a bit apprehensive that it would just be super thick, but thankfully it was just a topo map type symbology, where green is forest and yellow is fields. The forest was lovely and open, and such a pleasure to run through! We spiked the first three, but I definitely was feeling the uphills, and had to ask Ali if we could start walking them. Amy was also starting to suffer a bit with the soft footing/bushwhacking, which apparently is actually a specific strength that should be trained =). The area around 4-5-6 was hillier, but we had slowed down a bit, and my HR was starting to come out of L4 and back into L3. We missed 5 by about 2min, too far east, but corrected relatively quickly. I took a pretty good header tripping over a tree on the way to 4 - pushing too hard.

Then on to a trail run! This was one of the most enjoyable trails I've been on in a long time - some rolling, but mostly flat, singletrack, no rocks, just lovely. We'd slowed down, and I was feeling really good. Somewhere near the end of the trail I took another gel, at 1.5hrs in. I think the trail also gave Amy a chance to recover from the orienteering sections, and we'd started chatting a giggling a bit. Running near Team Canyonero (Sergei's team) for this section, and they didn't seem too anxious to pass us. After the end of the map, we had another ~2km on the white-blazed escarpment trail, until we hit Highway 5, and the next map

Map 3, Tyandaga-Sassafras:
This started with another score-o of 5 points, that I think we did in a good order (ABDCE), though Canyonero got ahead of us, I think doing ABDEC. Amy was starting to flag on the off-trail climbs by now, but holding tough, and I was out of water and getting thirsty. We lost ~30s just before B (attacking from the southeast), discussing where it was, but otherwise a clean navigational section. The controls were all hung very visibly.

At the aid station, Amy and I gave Ali our water bottles to fill, we punched the control, and ran off, and she caught us not much later. Short trail run section and then the last orienteering bit, in a really cool terrain. It was like the rock cliff was trying act like a glacier, and there were these big rocky crevasses near the cliffs, as though layers of rock were trying to shear off and calvve. So cool! We spiked these next 6 controls, closing in on Nick Duca's team, Jackson Triggs Wine-Os.

Then some more trail running, and into the last bit, the urban adventure (see inset on Tyandaga map). We weren't sure of the scale , but knew we were nearly done. There was a mandatory gear check at 8, but we blitzed through that, and then headed off in pursuit of the Wine-Os and Canyoneros! There was a climb away from 8, and that was when I definitely started to notice that my glutes and quads had just run 20 something km, at a relatively high HR. Oof! But, I'm too competitive not to keep fighting, and Amy latched on to Ali's backpack for some extra speed, and we started hammering. Caught up to Canyoneros at a stoplight where we scampered across just in time, and one of their teammates was suffering pretty good, so they didn't put up much of a fight. We caught the Wine-Os at the last control, and I'd say the general level of suffer among Team Giggles was pretty high, too. We didn't look back, though, and held off the Wine-Os by 45s or so. Fun to have people to race all the way to the end!

This was a great race - like an adventure race, only the maps were all great and the controls were in the right places! I loved racing with Amy and Ali, and I think we all had something to contribute to the team. No negative moments, at least not that I noticed.  We ended up winning the women's category by an hour, and coming in 5th overall - less than five minutes out of winning the entire thing!  We're already talking about next year... 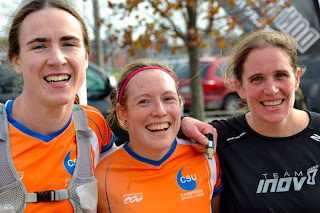