The Billygoat is one of my favorite orienteering races, for many reasons, not least of which is the tradition that the control codes are the initials from last year's results - i.e. the 6th control will have the initials of whoever finished 6th last year.  It is always a good goal to try and finish high enough that your initials will end up on a control next year.  Generally the top 20 is good enough for this, but it varies, and finishing in the top 20 is highly dependent on who shows up for the top men.  The Billygoat is a silly race; you're allowed to skip a control, you're allowed to follow people, you can't take yourself too seriously; at the same time, there's some prestige to this race.  You only get the teeshirt if you finish under the 3.5hr cut-off, and then you wear that thing with pride.

Anyway, this year, some of the top ladies weren't in town, with Sam in Sweden and Ali in Ohio, and a bunch of Canadians didn't bother to make the trek down to Earl's Trails, in Amherst.  The day dawned chillier than expected, but this was good, because I'm certainly not used to the heat, and a long hard run with lots of hills on the first hot day of the year would be pure misery.  My goal for the race was to finish in the top 20 overall, but more importantly, my nemesis for the race (unbeknownst to him) was Greg Balter, a crafty old Russian goat in the M45 category, who beats me a lot more than I beat him (We're 2 and 6 for last year, if anyone were keeping score).  My plan was to run my own race, but definitely keep tabs on where Greg was going, see if I could pick up any tricks, and outrun him at the end if I couldn't outsmart him.

The first control is a long leg, with some good route choices along the way, and I decided that I wanted to go around to the left, staying high and running on trails where possible.  Everyone starts running, and it becomes immediately clear that my route up the trail is unique enough that I'm doing it alone.  Damn.  Oh well, trust yourself, and keep running hard!  Bummer, there goes my plan to run with Greg.  I ran aggressively, and passed Tiivo, a junior, and Anna, one of my training buddies, on the way, clearly the second half of my route wasn't too dumb, but the first half had added some distance.  I got to the control just after a group being driven by Tim P and Nadim A, with some West Point cadets and Ben G in tow, and that gave me a good idea of how much time I'd lost - I was guessing somewhere between 2-5 minutes on the lead pack.

(click on the map for a bigger version, then click the map to toggle the route on or off)

I didn't want to be running with Tim's pack -  I thought I could go faster than that.  So I got to the front of the pack and made a few attacks, all of which failed, because I was running faster than I could orienteer, and was making mistakes to each control, so everybody would catch up.  By now I'd burned a few matches, and knew I had to slow down, but I really wanted to beat these people, so I decided that I would skip #6, and save myself some climb, and hopefully leapfrog onto a faster-moving group.  This strategy worked, and I recovered enough cruising down the hill to 7 that I could think again.  As I left 7, Greg Balter and Ted Good punched it, so I was psyched.  Back to plan A!  Even though I had already skipped and Greg hadn't, at least I could run with him for a bit.

The next few controls were pretty good; it's always easier to run in a pack, and we had some cadets for company, too.  But on the climb to 11, I discovered that I had indeed burned too many matches early on, and the fatigue started to accumulate.  Damn.  Greg pulled away up the last climb, and that was it, now I was dropped.  I spent the next few controls doing a lot of walking on the uphills, and it definitely felt like there were a lot of uphills, but finally I got to the top of the map, and was facing a couple downhill controls.  14-15-16-17-18 were all sort of zig-zaggy, and I had to keep reminding myself to push, because there would be folks behind me who hadn't skipped yet, and might catch back up that way.  My fears were well-founded, because Ted caught back up as I was approaching 18, having skipped 16 or 17.  Time to turn the legs and brain up to the next level!

I was feeling pretty good now that I'd recovered from pushing too hard in the beginning, and I started to push harder again, but unfortunately, I again outran my ability to navigate, and made a mistake at both #20 and 21.  The mistake at 21 was bad enough that Ted was able to catch up and get ahead of me, but thankfully I found more oomph in my legs, and chased him down and passed him on 22 and 23.  I maintained my lead to the finish, good enough for 16th place, 21min behind Wyatt, who won the race, but 21min ahead of the next female finisher, Elina.  Greg finished 4.5min up on me, some of which he certainly made up in the skip, but most of which was due to just running faster and cleaner.  Next time, I will be a lot less sloppy in my orienteering. 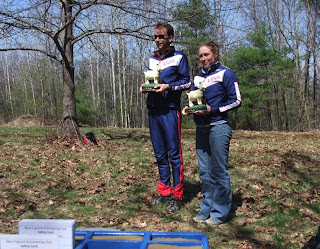 Yet another reason to love the Billygoat is that the trophy is not yours to keep - the winners sign the back, and then you have to bring the trophy to next year's Billygoat, to pass on to whoever wins the next Billygoat.  Hopefully I can do it again!
Posted by Alex at 10:50 AM