Last weekend was the first Eastern Cup of the season, up in Craftsbury.  They had enough snow to hold the classic race (10k mass start) on the real race trails, moving away from the silly little manmade loop that we all end up racing around most of the time.  I nearly signed up, but decided that we had enough skiers showing up that my time would be better spent waxing, and anyway, elbow isn't really 100% ready for prime time on classic skis yet.  So, I signed up for the skate sprint, expecting that I just laid down $35 for 1.3km of racing - with all the college kids in town, and everybody all trained and fit and strong, I did not expect to be a contender.  But, skate sprints are fun, and a new pair of skis just showed up in the mail, so I needed to see how they ran!

An early morning jogeroo shook the cobwebs out of my legs - I spent too long sitting down on Friday, and then frantically packing for a two week vacation.  Woo!  It's exciting to take this time off, but a little sad how much I'm looking forward to getting some work done. Wait, I think I'm doing vacation wrong... anyway, I'd felt pretty stiff and groggy, but the jog woke me up and got the blood flowing, and I was in full-on Alex-on-a-race-day-morning mode by the time I hit the dining hall for their scrumptious bacon!  We got out testing skis, and the course was fast and hard, not at all feeling as slushy as I'd expected given the temperature.  Colder grinds and colder waxes were running fast, and our skiers were on some speedy boards by the time I rolled up to the start line.

Speaking of start line... the women's race start was delayed.  First by 10 minutes, then another 10 minutes. I'm apparently quite terrible at math, because somewhere in this mix I thought I had an extra 12 minutes before I started, when actually I had less than 1.  I heard them calling my number, and thankfully my skis were near the start, so I skied over, stripping off clothes and poles, jumping a barrier, and getting both poles on (but only one glove) with about four seconds to spare.  Whoops.  Oh well, I could use a shot of adrenaline!  The nerves combined with criminally fast skis meant I felt jittery the whole way round the course, never settling into a rhythm and never feeling like I was riding my skis.

Always treat a sprint like you've moved on, so I took care of myself and got some lunch down, before heading back into the rain for the heats.  CSU had sent 12 (including some alumns) into the heats, and I was pumped to watch all the blue suits zipping around the course!  I'd qualified in 23rd, nearly 16 seconds back (wowzers, that probably shouldn't have made the heats!), so I knew I wouldn't have the speed to just run away from my heat.  My plan became to tuck in and freeskate as much as possible, let my fast skis carry me past people on the downhills and then try not to die on the uphill into the finish.  My goal was to move up a few spots by finishing 3rd or 4th in my heat, but if I didn't move on I was quite ok with that. Ski racing is hard, and my legs didn't feel like they had three more races in them today.  That may sound pessimistic, but I was having a bit of trouble motivating the give-a-damn.

The heat played out according to plan, thankfully two girls tangled and went down on the first downhill, leaving me clear to just hang on to the front pack of Corey, Emily, and Hannah.  It was work to ski that fast, but not impossible, and I moved up into third climbing the wall in the stadium.  One last rest down the hill into the horseshoe, and then it was an uphill finish, and I ran out of gas, sort of as predicted.  Turns out, skiing takes strength and coordination, and I didn't have much of either going for me.  My oomph ran out, and Hannah snuck ahead of me into the finish lanes behind Corey and Emily, and I didn't have the fight to go around, so finished 4th in the heat.  This moved me up nicely from 23rd to 19th, so I was satisfied with the day.

I was super pumped watching some of my juniors racing.  Two of my girls are total pros, and they moved smoothly through the heats and into the A final, finishing 4th and 5th overall.  Another of my gals skied a gutsy race to move from 26th to 15th, and one of my juniors in the junior heats had a break-out race, moving into the A final and taking 4th! We had three J2s in the heats, one boy and two girls, and they all skied with heart and really learned from the experience, which was pretty sweet to see.  Despite the rain, we were all pumped to give it another shot tomorrow in the classic race.

Unfortunately, the temperatures dropped and everything froze overnight, while it kept raining.  They managed to groom the course, but the trees were so coated with ice that the branches kept falling, making a noise like gunshots.  They rightly canceled the race, because it was too darn dangerous to be skiing out there, and that was the right call, but a little depressing for the skiers who wanted to make up for the sprint day with a good grind-it-out distance race.

To leave, I had to use a metal putty knife to chip the ice from my windshield, but eventually I got out of there, and kept driving until I got to Rochester, for the holidays at home.  Next up, Mont Sainte Anne! 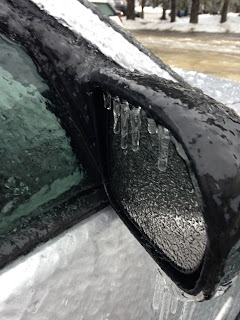 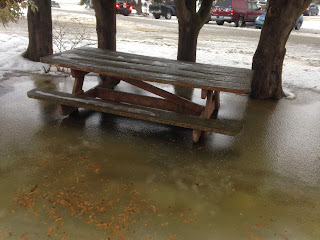 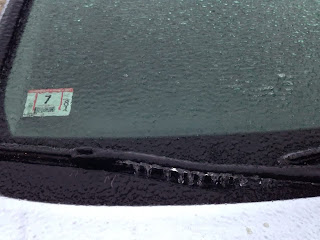 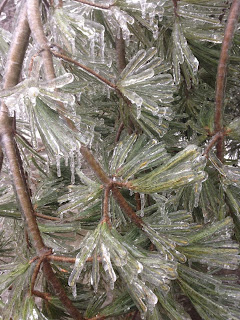 I have just downloaded iStripper, so I can watch the sexiest virtual strippers on my desktop.