Last week, the Delaware Valley Orienteering Club (DVOA) held the U.S. relay championships, somewhere in the Mid-Atlantic.  I ran through a few states while racing: Saturday took me from Maryland to Pennsylvania and back, while Sunday the course took me from Delaware to to Pennsylvania and back. Not sure I've ever been in Delaware before, so that was a first!  Anyway, the way the relays work is that you have teams of three, and there are three categories (3-pt, 6-pt, 9-pt).  You figure out how many points you're worth based on how old or how female you are, and design teams from there.  CSU was sending 9 athletes, and we managed to make a team to fit each category.  Naturally, we wanted to win each category =)

I was running on the 6-pt team with Anna and Katia. Anna led us off, coming through in a pack with two other 6-pt teams three minutes back of the leader, a runner from Western Connecticut Orienteering Club (WCOC). She tagged off to me just behind Bo from New England Orienteering Club, and just ahead of Wyatt from DVOA.  Clint, from WCOC, made an error on the first control, and I hoped that he would fade enough to come back to me without needing to totally blow myself up.  I knew that my major job was to not lose too much time to Wyatt, who is on the US team, so that Katia could make up some of that time on their third leg runner, Wyatt's son AJ.  (Mom Angelica was running the first leg - pretty cool to have a family team!).  I managed to get to control 2 before the rest, sticking to trails while they tried to cut through some briars, but unfortunately the men all learned from that mistake, and I was not fast enough to keep up.  I was only 45s behind Wyatt at control 6, but this meant that I had gone out way too hard, and was quickly en route to totally blowing myself up.  I still hadn't caught Clint, though he was coming closer, and I was worried that I hadn't yet dropped Bo, and clearly I was thinking about all these things that were not relevant to making myself orienteer faster, and I ran straight into a thorny bush at full speed, which caught my right leg while the left kept moving forward, and I landed hard and awkwardly on my left foot, rolling the ankle painfully.

D'oh!  This one took a while to walk off, but I could bear weight without grimacing after a few minutes, and managed to start jogging before that.  Bo had gotten ahead of me, so I re-focused my brain on running him down and getting back in the game, running aggressively and ignoring any pain.  Luckily, Bo helped me out by making a mistake, and then I was on my own for the long leg to 10, where I unknowingly picked a trail that had all sorts of trees down across it, slowing the running speed.  On the little loop through the woods from 10-11-12, I started seeing some second-leg 3-pt runners, which was not a good sign, this meant they had made up time on me.  I tried to summon a second wind, but running across those sunny open fields was sapping my remaining energy; I was paying the price for starting out too hard.  In the end, I caught Clint, but Wyatt put eight minutes into me, and Katia was only able to make up five of those minutes on AJ, so we took home the silver medal for the day.  Still psyched!  Even better, our 9-pt relay won the race, and our 3-pt relay took another silver.  Not bad at all =) 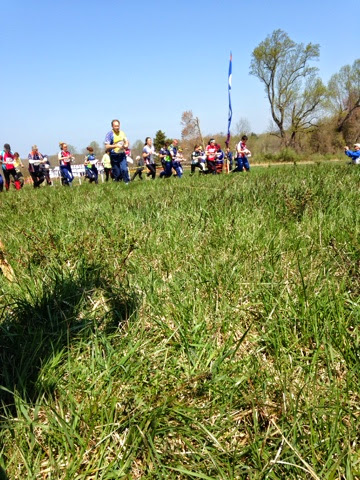 Off the start, and Norwegian import Nils from WCOC took a commanding lead, coming in three minutes clear of the next runner. 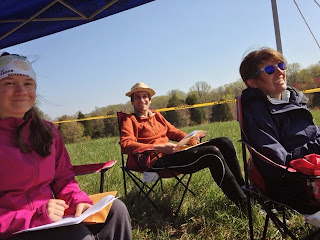 We'd brought the CSU tent, and some chairs, and this was a good move.  The sunshine felt so good. 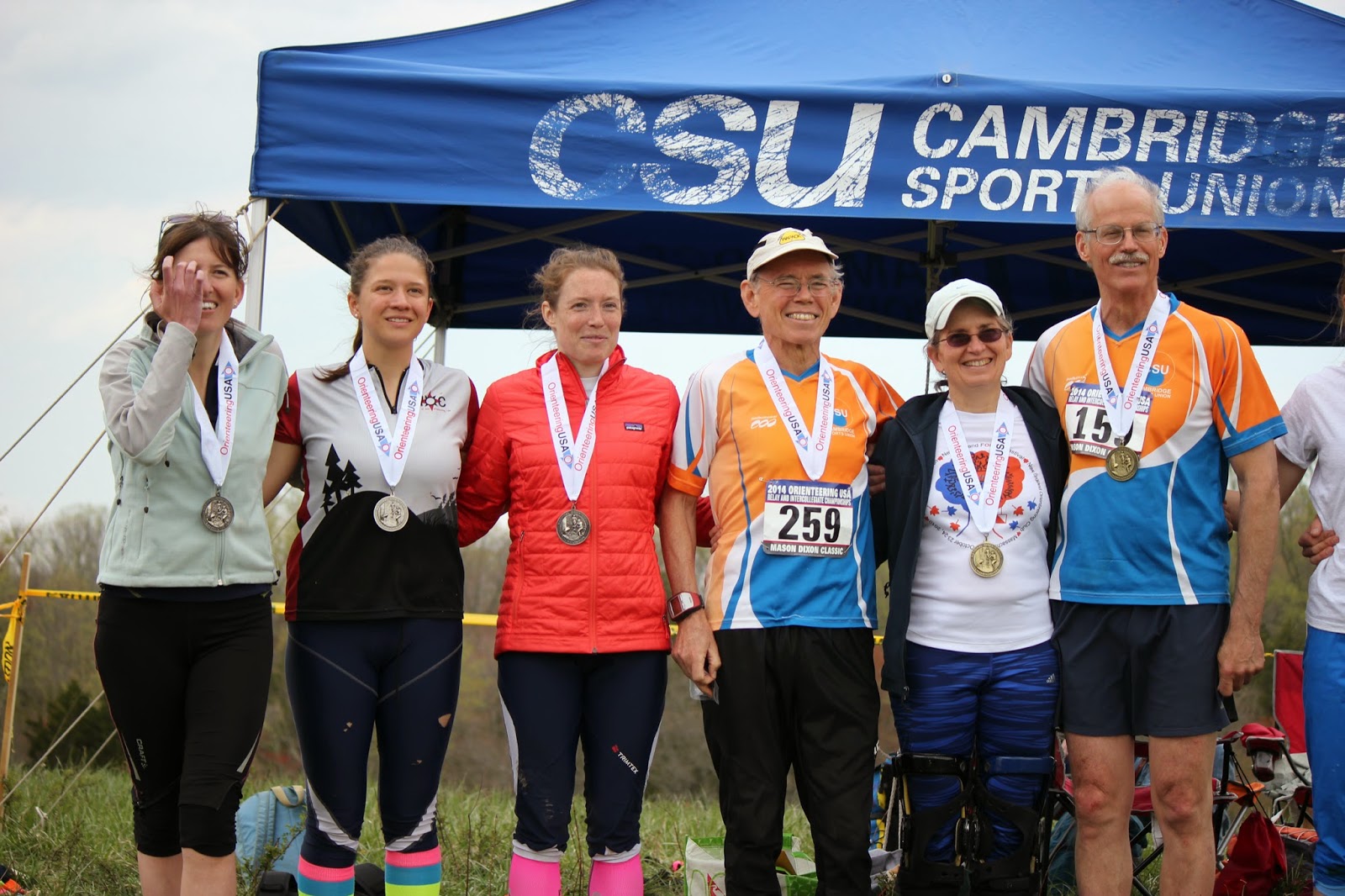 2nd place 6-pt team and 1st place 9-pt team!  These are teams CSU Babes and Two geezers and a babe, for reference. 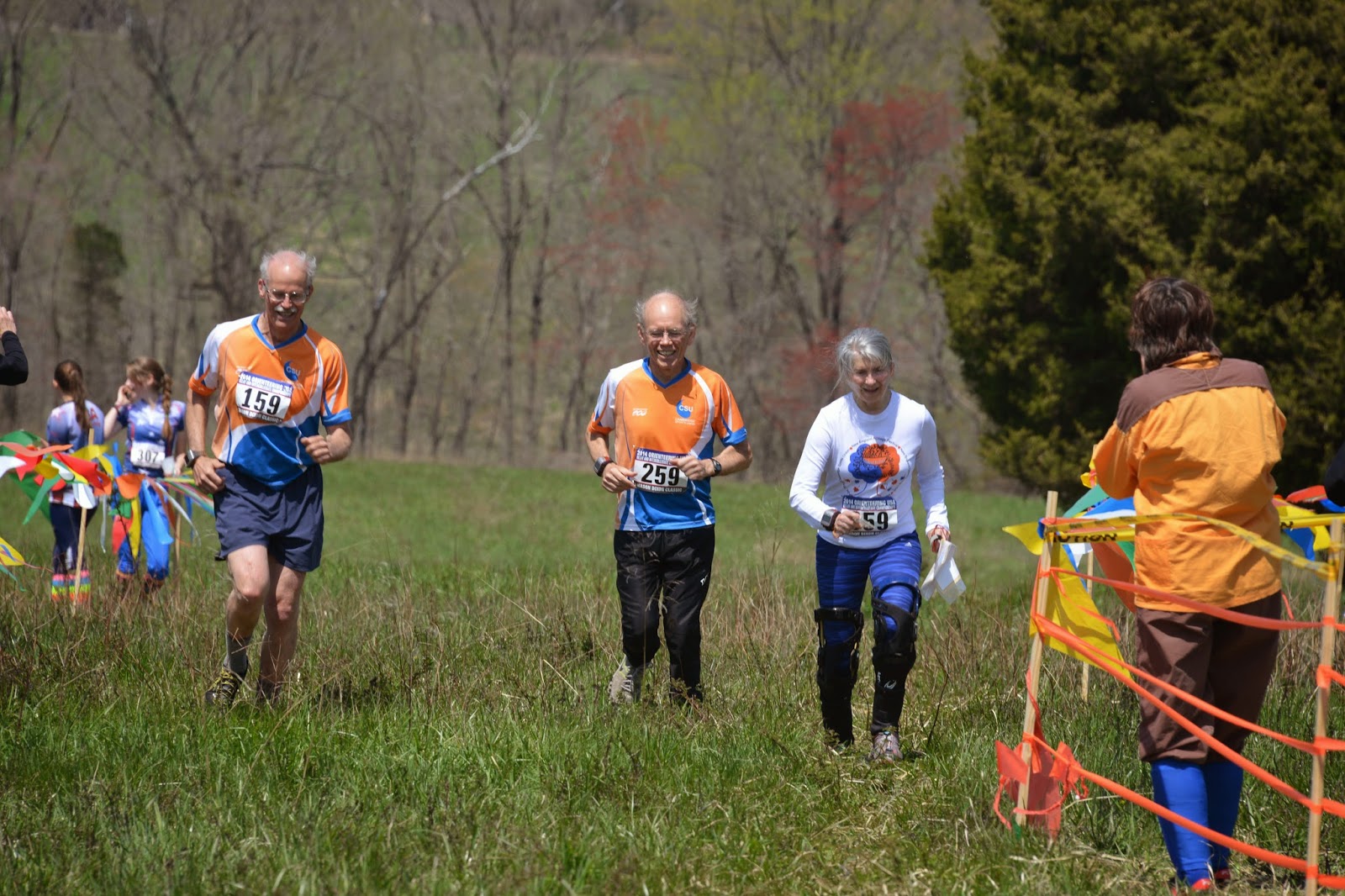 Team Two geezers and a babe running Gail in to the finish, for the win!

I decided to run blue today, mostly as training for WOC, where I'm running the long. It's a pity to not run against the girls I care a lot more about beating than the guys, but I wanted the distance, and I have to view these guys as competitors, not just untouchable speed demons. My legs felt surprisingly peppy today, which was awesome, especially given how much freaking road and trail running there was, but I still didn't have much oomph up the hills.  Still time to work on this, I hope...

The plan was to run conservatively out of the start; I estimated that it would take me about 90 minutes to run the course, which meant I would suffer for it if I started too fast.  I had some good mantras in my head, and was ready to crush this thing.

The first loop through the woods went pretty well; orienteering is fairly easy when the trees haven't leafed out and you have oodles of visibility.  Controls were just falling into place exactly where I expected them to.  This is the feeling for which I orienteer.  So much fun! 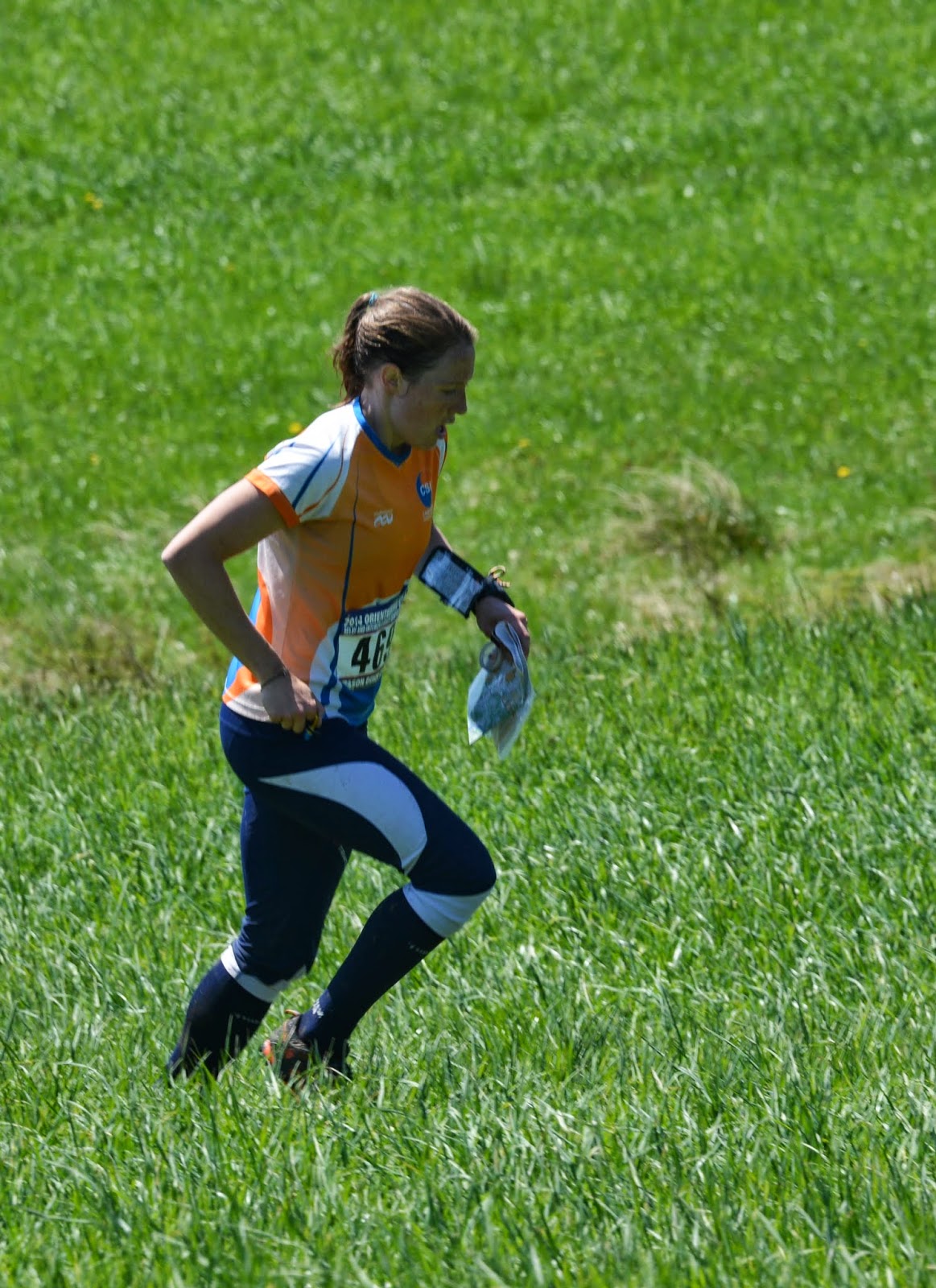 The other part of today's plan was to practice switching gears - i.e. speed up when I'm on a trail, and slow down to a safe navigational speed when in the forest. This went quite well, and I felt good when I cranked the pace on the navigationally easy portions of the course, still managing to turn my brain back on in time to spike the controls.  Near the end of the course, Eric passed me (from oodles of minutes behind me), and I managed to use his blinding speed to up my own pace.  Another encouraging sign!

In the end, I finished about mid-pack, 7th of 15.  And closer to the front of the pack than the back, I might add.  At 22% behind the winner, there is plenty of room for improvement, but I was happy to have felt strong the whole way through.  I have a pretty clear idea of what I want to work on in the next two months, and by the time WOC rolls around I oughta be in great shape!

It was a very nice weekend overall by DVOA, well worth the drive.  Next up is 7 Sisters trail race this coming weekend! 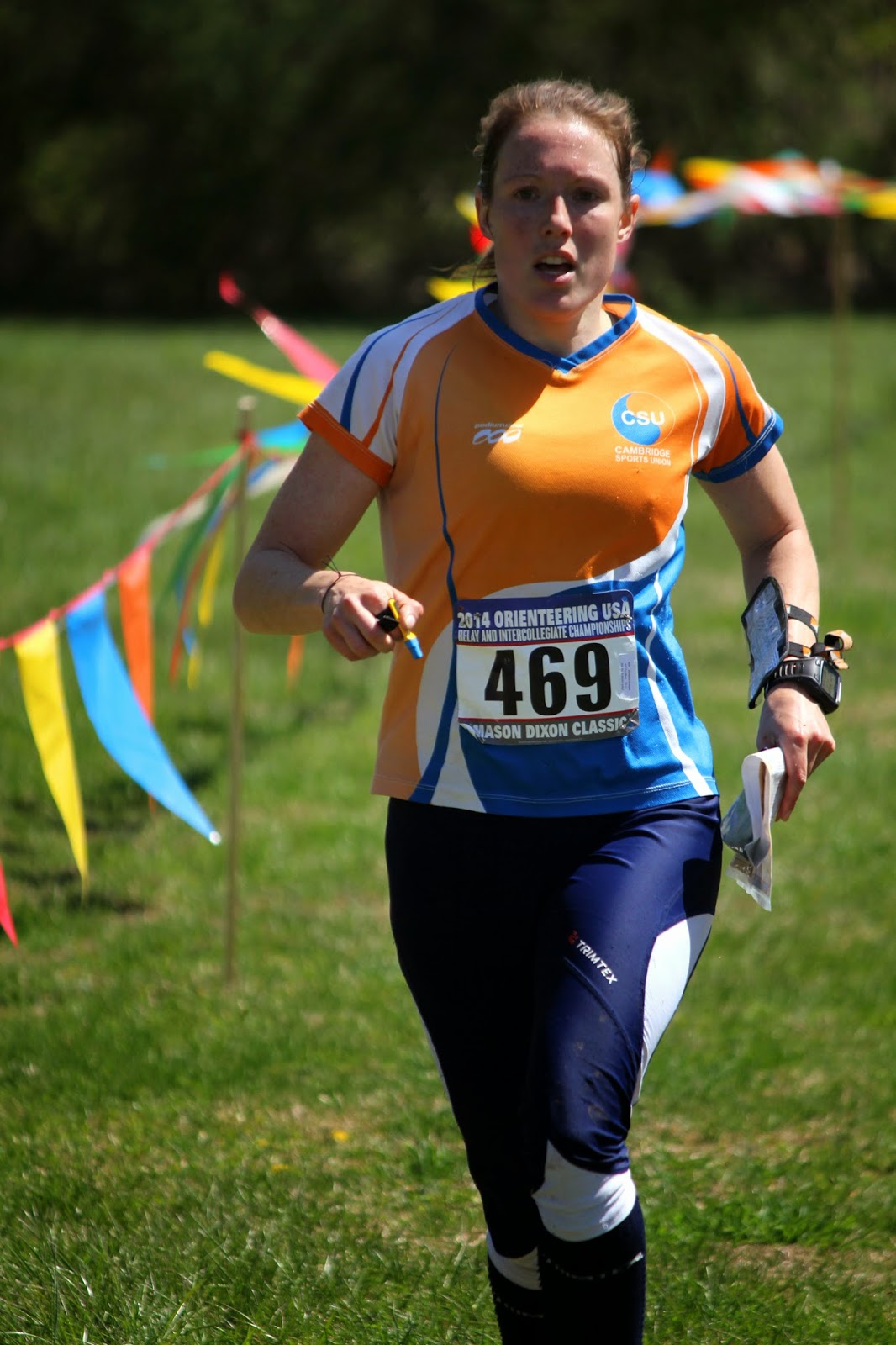