Usually, the first big national-level orienteering race on the east coast is the West Point event.  "A meet" is the outdated name for national-level orienteering events.  Anyway, this year team trials was out in California, so that was the first introduction to wobbly, soft, rocky, uneven ground for my ankles and stabilizer muscles.  That was such a difference from the pavement where I'd built my running base over the winter that my legs were pretty well destroyed by the end of four races over three days, and that, in combination with a bit of mental burn-out, led me to taking my season break after California.  Relaxing both my mind and body was more necessary than I'd even realized, and when I started up training again last Monday (ok, it wasn't a very long season break, but it was long enough!), I was surprised at both how refreshed and how unfit I felt!  I don't think I actually lost any fitness, but you do lose the sharpness that comes with a taper, and so I wasn't expecting much in terms of physical performance at last weekend's West Point A meet.  But I knew my body would be able to take the abuse of the rocks and gnarly terrain offered up by the Hudson Highlands, and there were so few places to stretch it out that I wasn't worried about my lack of leg speed. 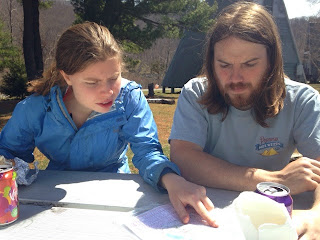 
Friday night, Ed and I managed to escape the city early enough to avoid the worst of the traffic, and landing in New Haven in time for a lovely dinner with Becky and Rob.  It meant a slightly earlier start in the morning, but I'm a morning person, so my only regret is that I failed to find anything better than a Dunkin Donuts for some morning go juice.  I suppose the other regret is that I never actually *told* Ed that I'd bought him a bagel and a pepsi since he was asleep in the car, so he raced on no breakfast. Oops.

My goals for the race were two-fold: 1. to win the elite women's class, and 2. to beat Peter, who was running the same course.  I also had a slew of process goals.  Unfortunately, the cadets decided that the numbers dictated that we have two red courses, and Peter was running on a slightly different course than me - same overall distance and climb, but with different control layouts you start comparing apples to oranges.  The race went well for me, until I consciously took a "scenic" route over the top of Bull Hill - the view was indeed wonderful, and I didn't lose more than 20 seconds to the route, but the extra 120m of climb were paid for in my mistake to the next control, because a tired brain doesn't make good decisions.  In the end, Hannah took the win, and I barely snuck ahead of Katarina.  (results).

The afternoon featured some fun events, including an orienteering maze (see photo below, if the bright pink compression sleeves don't blind you), which was run as a junior fundraiser.  Peter and I competed to see who would take the win, and he whooped me soundly.  Damn.  The cadets also organized an event with a 30-minute time limit, where you got as many controls as you wanted, but controls were only valid for certain windows of time.  So, your strategy was not only about how to get the maximum number of controls in a given time, but also which ones you could go to at certain points along the course.  It was a fascinatingly difficult exercise, and super duper fun!  The map is here, with more instruction. 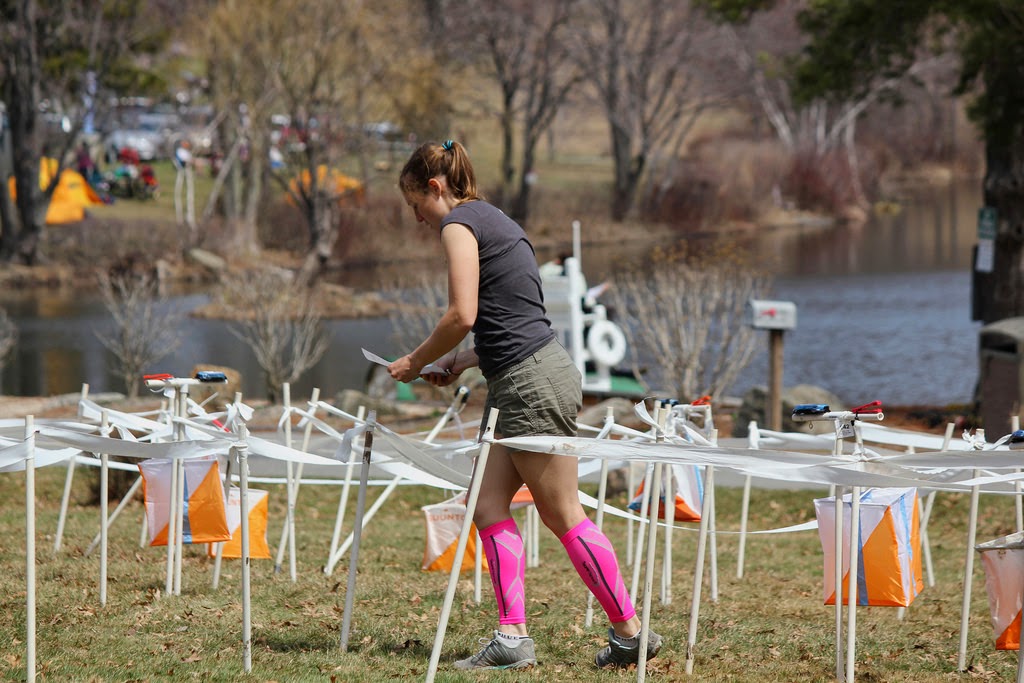 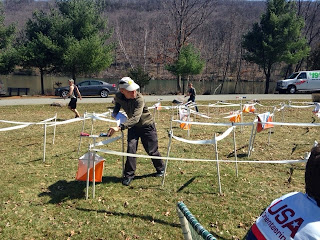 Peter crushing me in the maze-o. 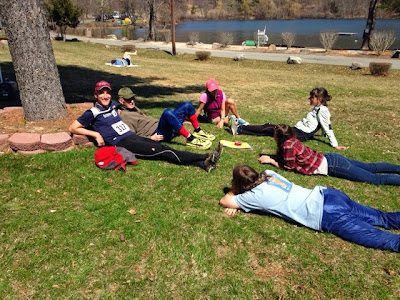 Thawing our winter bones in the April sunshine.

We spent the night in one of the A frames at Camp Frederick, and I didn't quite manage to give myself enough time to properly warm up for day 2.  The terrain for the second day was rockier and rougher, and I found myself struggling to keep moving forward quickly, flailing over the rocks and unsure of my ankles.  Day 2 also featured some very large cliffs, just to spice things up, and while I certainly don't mind scrambling up over cliffs, I was hesitant about downclimbing.  Ultimately, I lost a minute on one leg because I'd gone to the wrong gap in the cliffs, and there really wasn't a safe way through, so I had to backtrack, and the control after that I got totally lost wandering among big boulders and steep cliffs.  The brutality of the courses lent a rugged feel to the run, and I never felt like I was "flowing", while Hannah nimbly trotted through the course to wallop me by four minutes.  Ouch.  I barely hung on to second place overall, today tying with Katarina for second!

Despite having wanted better, I am very pleased with how my runs went this weekend.  I hit most of my process goals, and I learned a few things. One of the key lessons being to give enough respect to tired legs that you don't make mistakes.  There is still a lot of work to do before July, but given that we're one week into the season, this ain't a bad start!

Next up is the US relay championships, down in Maryland.  I can't wait! 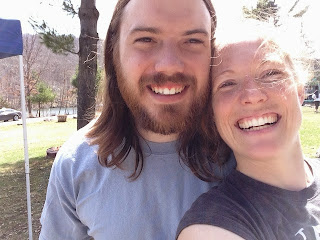