I'm racing the long distance final at the World Championships this summer, so I knew I need to get some long, tough, hilly races on my schedule to properly prepare.  The Mt. Greylock trail race fit this ticket perfectly, involving 13 miles, 960m of climb, and a scattering of rocks and tricky footing.  The race starts on the east side of the mountain, climbs up rather steeply, and then makes a long tour around and back down, basically 9 miles of descending.

Looking at some past results, I decided that 2h would be a "reach" time, seeing some of the names who'd come close, but I would like to hit 2:11, since that was last year's winner's time.  Unfortunately, I didn't do myself any favors by fully participating in the junior skier strength workout on Friday night, and my legs and glutes were stupendously sore come Sunday morning. I figured I'd be able to run through the soreness, but it would have been nice to run on fresher legs.  Anyway, the day dawned clear and cool, and I was really excited to go for a run in the mountains! 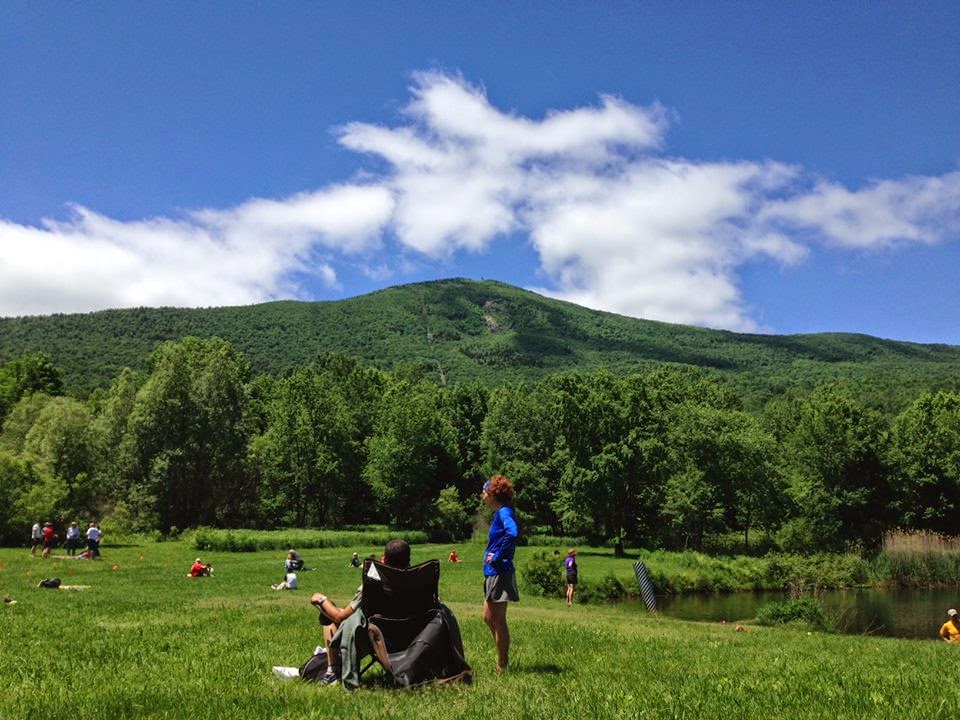 The race starts with a continuous climb to the top of Greylock, and I wanted to push the pace a little here and see what I was capable of doing, but without blowing up completely.  Unfortunately, the heavy legs made climbing a chore, and I was suffering sooner than I would have liked.  I didn't let up, choosing among mantras to figure out the one that fit best with my breathing and pace, and soon I was spending some quality time in my pain cave, near the entrance but staying put.  I let quite a few women get past, since there's really just one pace you can go for the effort you're willing to put out, and that pace is different for everyone.  With this long a climb, genetics start to play a role, and this girl was not made for sustained climbs, no matter how good my mental toughness.

Finally I hit the top, only 1 minute behind my expected time.  Great! Let's crush some downhills! The first part was fantastic, rocky, rooty, steep and slippery, and I danced past quite a few runners, confident in my Inov-8s.  Eventually that flattened out, and I had 3rd and 4th women ahead in my sights. This was a big relief - I had figured I was out of the race after the climb, given how far back I'd slipped, but now we were descending, and I could see my prey! The goal had been updated, now, I wanted a podium spot and I could see it. Unfortunately, that 3rd place girl looked like she was running quite comfortably, and we hit a more runnable section and she was gone. Well, once place at a time, let's hunt down Debbie first.

Through the second aid station and then there's this really nice rolling piece of singletrack, and that was where I had my first low spot.  I was having more trouble than I'm used to negotiating the rocks and roots, and realized I'd run through the feed without eating.  I told myself that once I caught up to Debbie, I could relax and down a gel, but I could hear her chatting easily to her teammate with her, and I felt like my breath was rushing in and out like a friggin' steam engine.  Probably only 5 minutes of negativity before I turned it around, but enough to cost some time, and some energy.  Eventually I remembered to enjoy what I was doing, and wouldn't you know it, running is easier when you're smiling.  I made contact with Debbie, downed my gel, and floated down the very runnable Jones' nose, pulling just ahead before the feed.

Unfortunately, I'd read the course map wrong, and thought the feed was at 9mi, not 7.5ish.  So, when I checked my watch and saw that I'd only come 8.5ish, I knew I had another 4.5mi before the final feed, and that was depressing.  We had a long gradual uphill now, and I didn't want to let up and let Debbie catch me, so I kept pushing, falling back into my hill-loving mantras and trying to swing my arms.  My calves were no longer cramping, but had not recovered from the initial climb, so my balance was all off, feet unable to cope with the rocks and things in the trail, and I fell into another low spot, mentally.  I kept tripping and stumbling, never falling, but it was enough that I had to give myself a stern talking to out loud a few times.  Was this just muscular fatigue, or was I really not fit enough to give an honest effort for 13 miles?  The doubt comes too easily when you're mid-race and starting to flag. 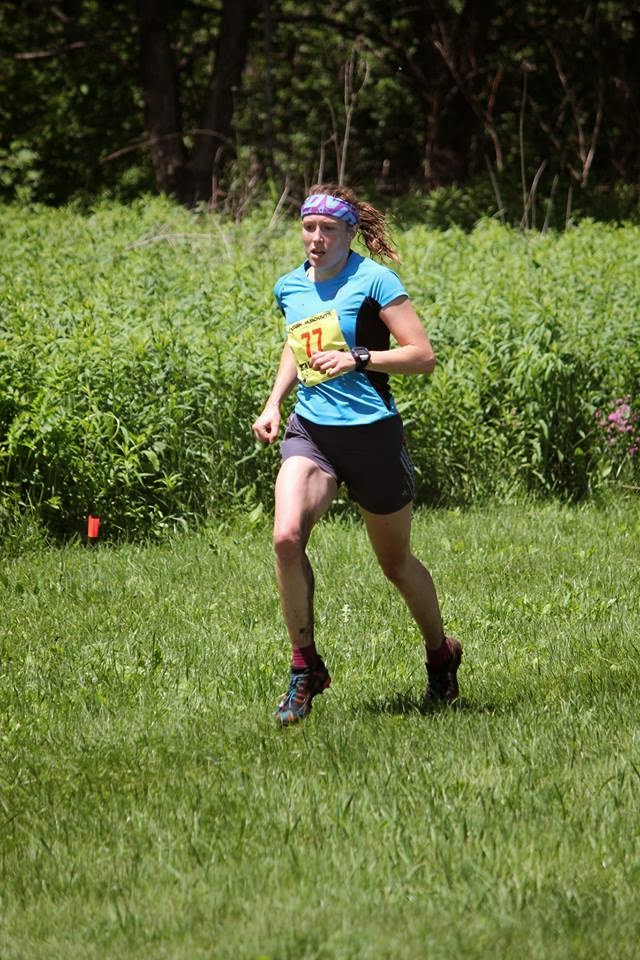 Eventually it was no longer uphill, and Debbie hadn't caught me yet, so I just had to cruise the downhill.  I tried to keep the pace up, but I was struggling physically now, and though I was in a better spot mentally, enjoying all the gravity-fed speed, it was taking entirely too much concentration to stay on my feet down the final hills.  I caught up to two guys, which helped boost the confidence, and finally I was back on some of the trail I'd previewed in my warmup.  Wahoo! nearly there!  Boy was I ready to be done running, my glutes were very unhappy with the extended runnable downhills after Friday's abuse.  In the end, I held onto 4th place, but I was disappointed to have been so mentally weak in the final four miles.  I definitely need to be able to hike sustained climbs faster, but more work on sustained downhills would also be good; I was not fully up to this challenge.  Hopefully, the final key workouts and a butt-load of rest will negate these issues in Italy!

I will probably come back to this race some day, as it really had some of everything - steep up, gradual up, technical up, easy up, all those varieties of down, and it was a nicely run affair in terms of the organization and post-run food.  Results were promptly uploaded, too, which is not always a given at a $20 trail race!  It felt good to test my body on a course that was more physical than technical, and I ended up running 2:11, which was my goal time!