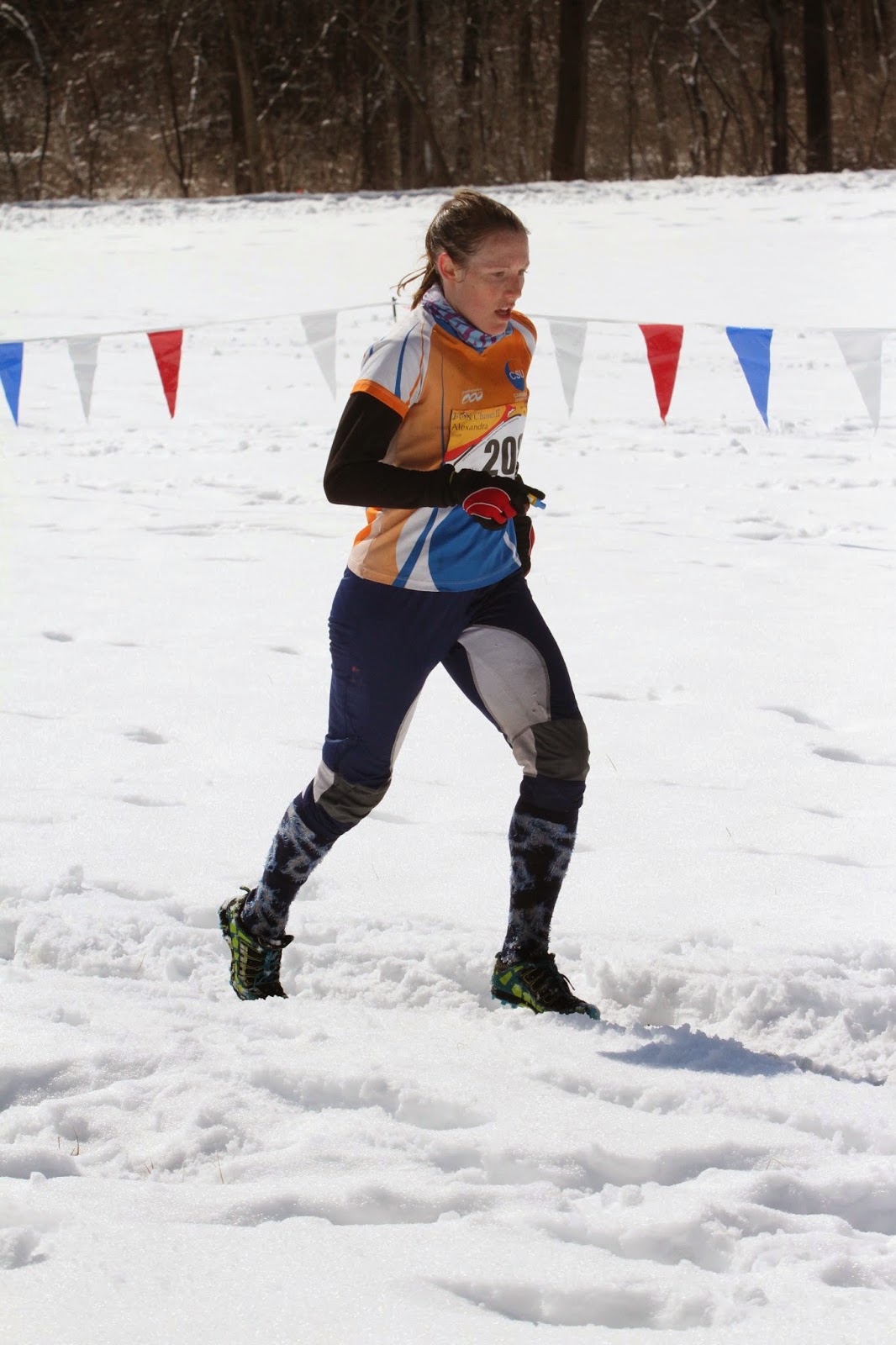 It may still be ski season, (as evidenced by my ski team racing at the Eastern Highschool Championships last weekend), but I forsook the fun thing to do in the snow and chose to go orienteering instead, down in Philadelphia, at the DVOA Fox Chaser event.  The snow followed me down, with six inches waiting for me at the Philly airport by the time I got there, but luckily travel wasn't too badly affected, and I found the people I needed to and got myself ready to go run... in the snow. The Delaware Valley Orienteering Association did a fantastic job with the meet, as I expected, though I would have preferred if they could have had slightly closer communication with their local weather gods.  I'd hoped to go south and run on some soft ground, for the first time all winter. Well, it was soft, anyway. 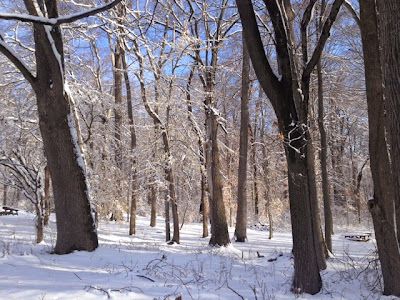 The first day was somewhat unremarkable.  Having not been on an orienteering map since November, my goal was to just read the map a lot, and see which processes still came naturally versus those that needed more thought.  The snow was nice in that it simplified the navigation, both in terms of slowing down my running and in providing a low-pass filter over all the noise that's normally obscuring the shape of the land.  The vegetation in Ridley Creek State Park appeared to be mostly thorny, which meant that much of the route choices would be about ways to avoid bashing through the thicker parts of the forest.


Out of the start I found myself flowing nicely, and the map made sense to me. Sweet! I was having a little trouble believing what my compass was telling me, but luckily reading the terrain kept me heading in the right direction.  Controls kept popping up ahead of me where I expected them, and this was pretty fun.  The snow made for tough running, though, and I felt like I was totally gassed. For the amount of effort I was putting out, I really wasn't making very good forward progress, and I knew this was largely due to all of my winter training miles being on pavement or ice.  Damn.

We had a couple legs traversing the northern section of the map where I kept popping out to the same wide trail of slippery death, and every time I hit the trail I was reminded how freakin' tired I was. Not how you want to feel the weekend before a race that actually matters. By the time I'd finally heaved my wheezing carcass up the slope to the finish field, I couldn't even manage to up the pace for the finish. Looking at splits, attackpoint thinks I made a 6-second error running to the finish! That's not good... Luckily, this was because I had run so hard everywhere else in the course, and not just that I'm in terrible shape, because I ended up besting my teammate Kseniya by nearly two minutes, and was fourth among the men, beating some who I haven't before.  At least all that effort paid off, but I was worried about the fatigue I'd carry into day 2. 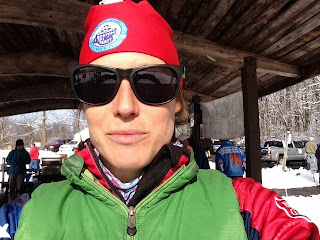 Sweet sunglasses. Thanks to the meet sponsor Brandywine something-or-other for my new look. 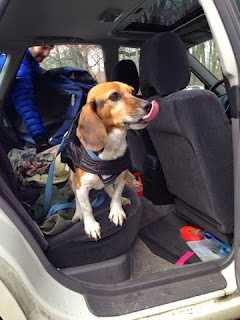 I was hanging out with Boris and his new dog, Barney, for most of the weekend. I miss having a beagle in my life, and this was a good dose of beagle for me! 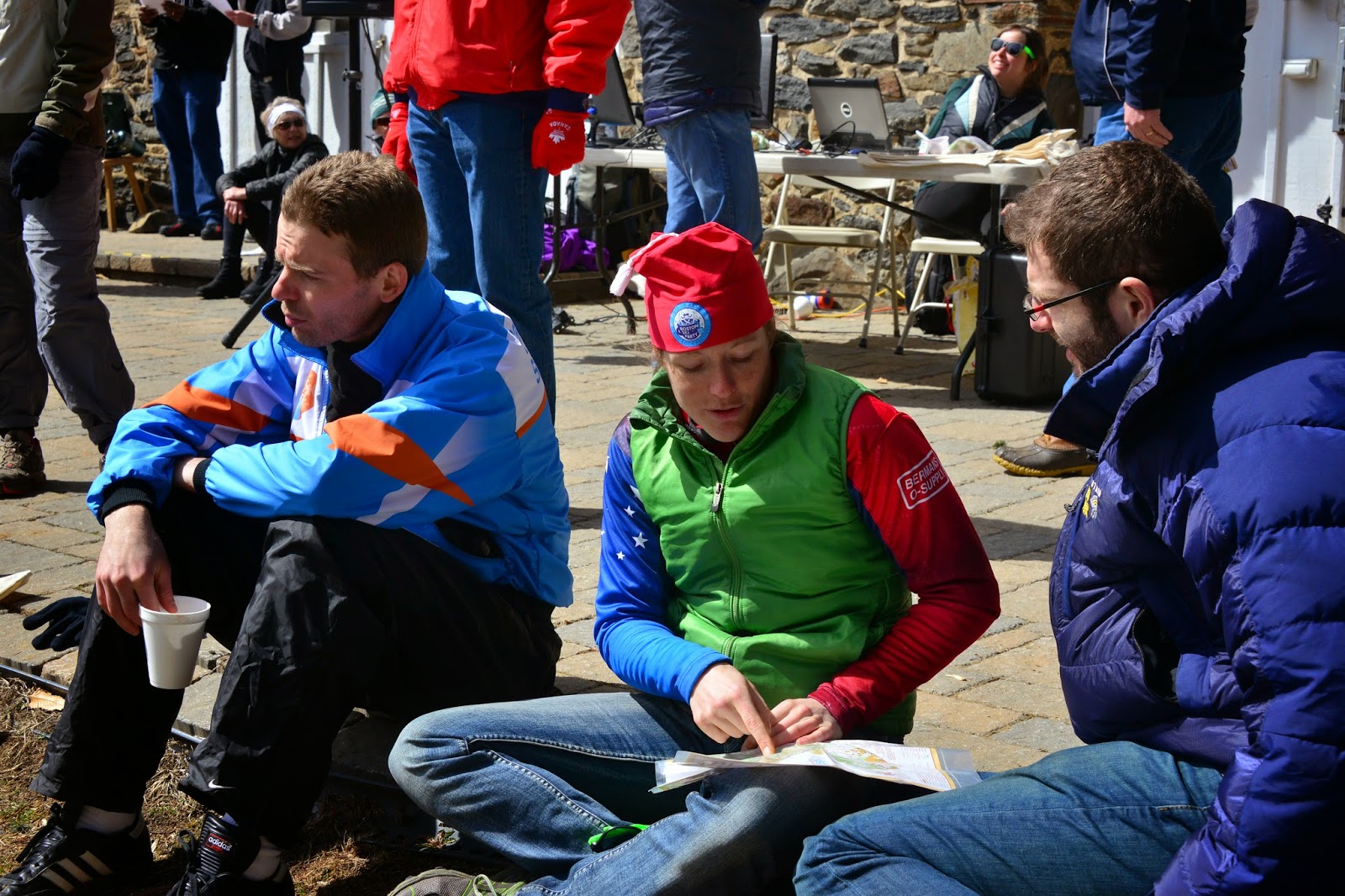 At least we had some sunshine! Otherwise, I'm not sure I would have survived the cold. Funny how expecting to be warm ruins your ability to survive being cold. This winter has not done good things to my metabolism.  Anyway, Sunday was more of the same - another "classic" event, still in the snow, still with the thorny terrain.  And another interesting and fun course, though it would have been even more fun at full non-snowy speed.

As soon as I started running, I could tell that I didn't have the oomph I wanted.  I tried to find the steady hard pace I'd tapped into yesterday, but my navigation was shakier, and I was letting other people on other courses mess with my concentration.  I dropped over two minutes in mistakes, and despite having a pretty good final 10 minutes, compared to Kseniya, in the end it didn't matter, because I went to the men's control 2, not my control 2.  This is a pretty crucial part of this game - go to all the controls, in order, and the fastest person to do that trick wins the race.  I had checked the control code, but clearly I then forgot it, because I thought that the code I saw at the men's control 2 was my code.  I was pretty frustrated by this, because it's one thing to lose a race because your competitors were faster; it's a totally different situation to take yourself out of the race.  Kseniya would have beaten me fair and square on day 2, but in the woulda-shoulda-coulda world, I would have taken the overall title by something like 30 seconds. Except, we don't live in the woulda-shoulda-coulda world.

I'm trying not to let the mispunch rattle me too much - get the mistakes out of the way this weekend, because next weekend is the US Champs (yes, a mere five months after the 2014 US Champs), and the US Team selection races for the 2015 World Orienteering Championships.  I'm not feeling very ready, but not much I can do other than keep my attitude positive, and come into the weekend nice and rested. 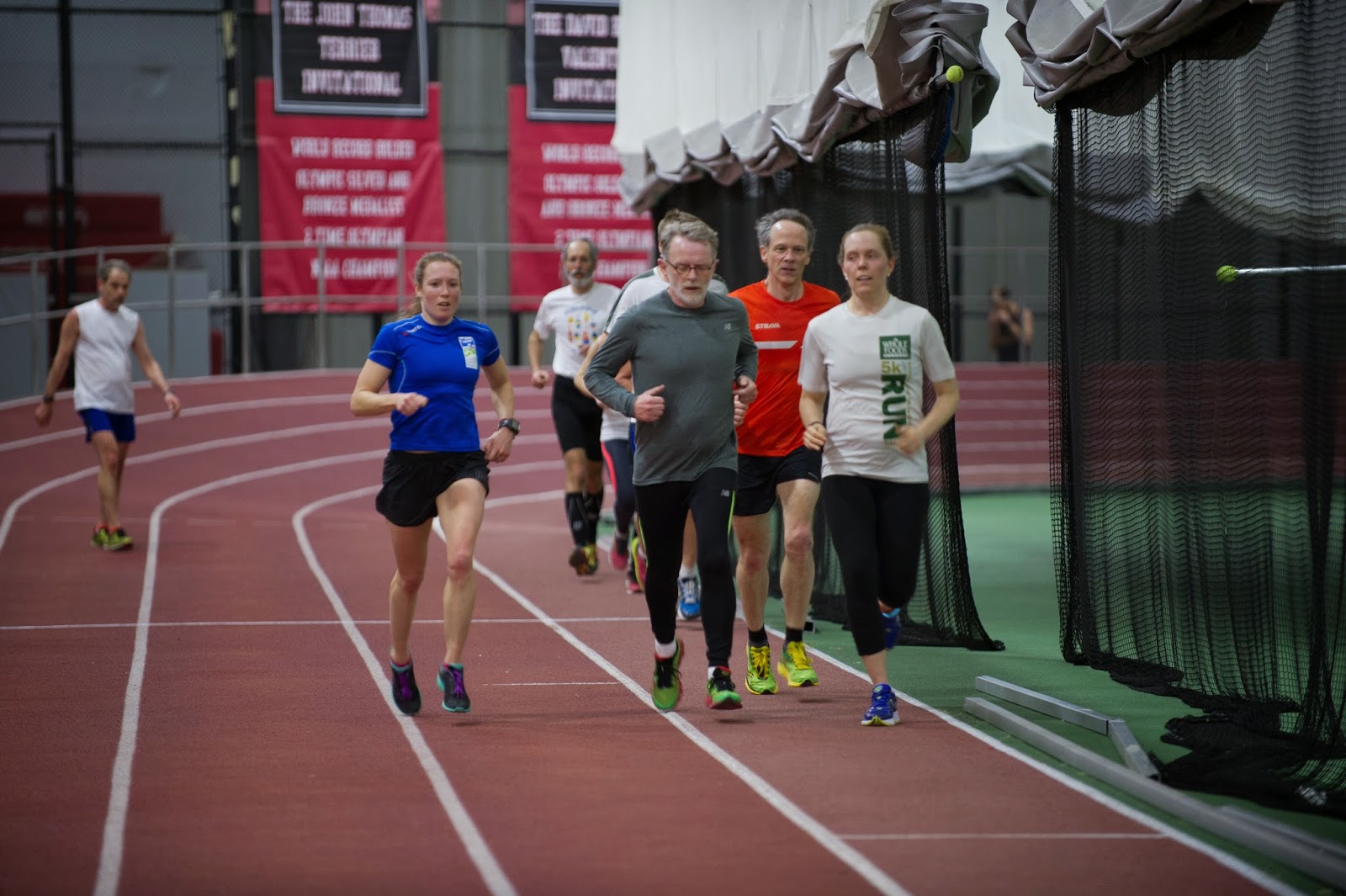 I spent most of the winter running on surfaces like this. Not uneven forest floor! Thanks to Julie's husband for showing up to the track and taking photos of the CSU runners.  It's the second winter in a row I've run these workouts, and the second winter in a row where I'm so incredibly grateful that I did run track, because with all the snow it's pretty much the only way to get going fast. 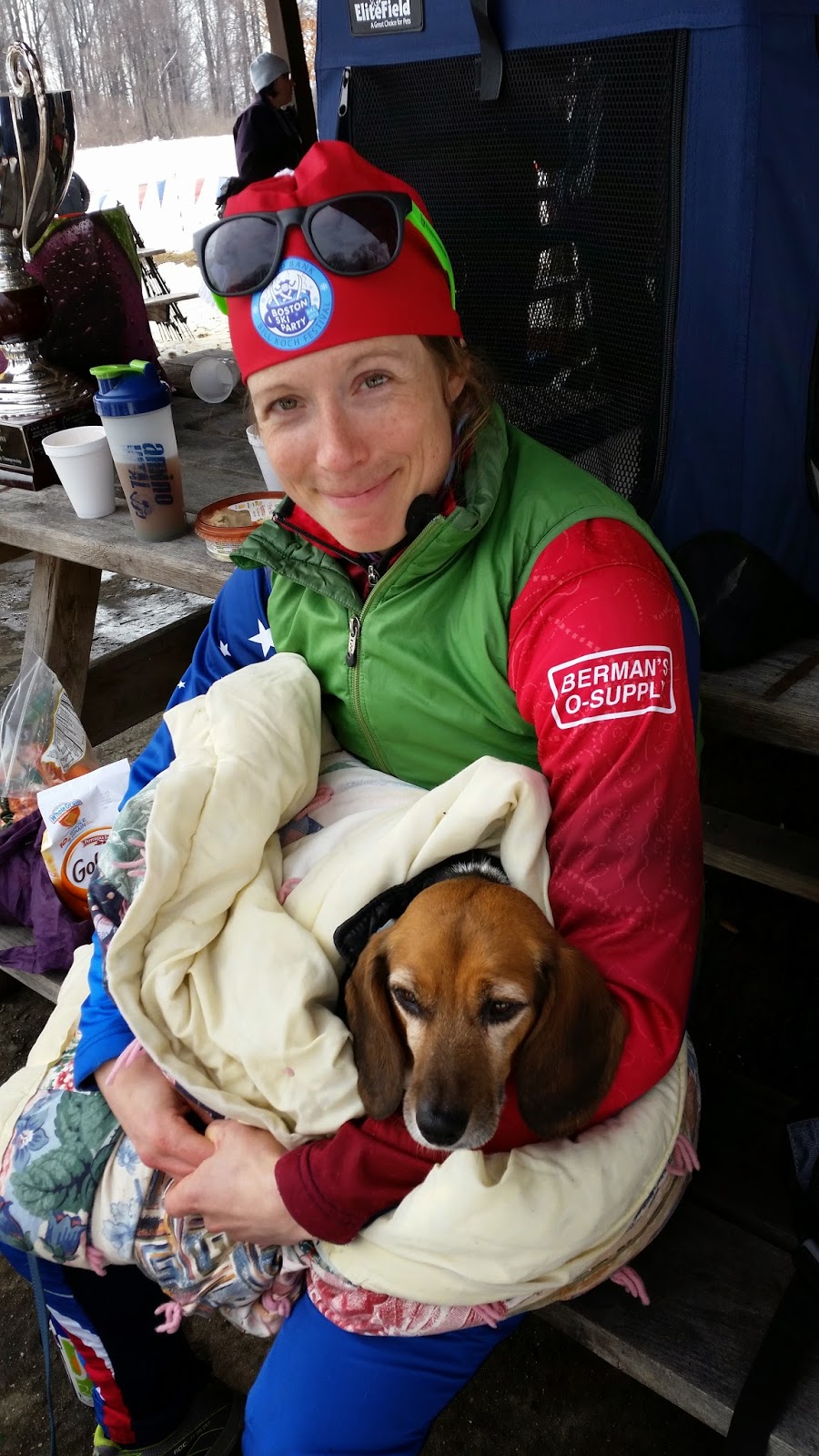 I found a beagle! Can I keep him?