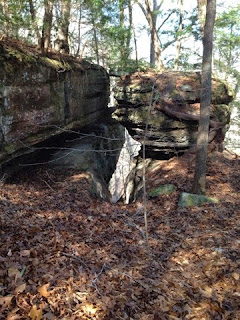 The US Orienteering Championships for sprint, middle, and long distance races happened last weekend down in Morehead, Kentucky. The good part here is that I've never been to Kentucky, so I got a chance to explore a new state a little bit. The less-good part is that the 2015 US Champs were a mere 5 months after the 2014 US Champs, and still during ski season for those of us who have ski seasons. But, timing aside, this was a great event by Orienteering Cincinnati; with all new maps, friendly people, and interesting courses.  The terrain was cool, lots of cliffs and caves and stone arches; unfortunately, or maybe fortunately, the courses didn't really make much use of the rock formations. There was also plenty of greenbriar, which was definitely a good reason to be running this early, since it's the only green thing around, letting you more easily avoid it.

The US Orienteering Team Executive Steering Committee (ESC) also decided to use this weekend as the selection races for the 2015 World Championships, in Inverness, Scotland this August.  I happen to very badly want to run the long distance race at the world champs, so I knew I had to perform reasonably well this weekend to win that spot. Given the lack of access to dry forest all winter, I'd be relying on deliberate and consistent navigation, and hope that my legs could take the abuse of three days of off-trail running. Every step of every run this winter has been on pavement, which doesn't do much to train your calf stabilizer muscles. At least I had CSU indoor track program to get the legs moving quickly! 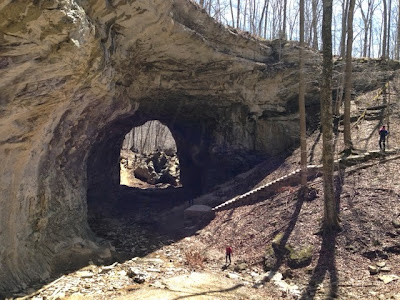 This is one of the awesome natural bridges, that we ran right over during the middle distance race! I didn't notice it at the time, or at least I didn't notice that it was a bridge, but I'm glad I went back there after the race to look around. 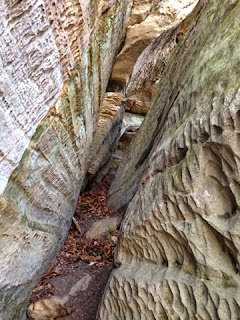 More cool slot-canyon-esque rocks I found on the model event.

Sprint race
The weekend started on Friday, with the sprint race. I flew in to Cincinnati, which gave me a chance to briefly visit with Virginia and Kristen, catch a quick breakfast and a big hug, and then it was on to Kentucky, through some beautiful ruggedly remote country.  It was chilly, in fact, it started to snow, more proof that the snow has just been following me around the country, but after my warmup I was feeling warm enough that I decided to race in a singlet, with gloves. Turns out, this was a really terrible idea.

Between my sports bra being tight around my ribs (yay for my lats appearing, a month too late!), my heart rate strap under the sports bra strap, and the lack of an extra layer, I got one of the worst breathing cramps I have ever experienced. It was really a shame, because my legs felt great; light and loose and eating up the hills, but once that breathing cramp hit, I could barely stagger along. This being the US Champs, I wasn't willing to stop and walk it off, though I did manage to pull the heart rate strap down around my belly, which helped a bit. So, I sort of staggered through the final 3/4 of the race, struggling to breathe, struggling to open my stride, and just really feeling miserable. It hurt! A day later, I had a bruise over my ribs and the muscles over my ribs were incredibly sore. I apparently did Bad Things.

Anyway, I got a little lucky, and some other people made some mistakes, and my stagger-jog was fast enough to still snag the bronze. I wasn't expecting that! Given that my legs had felt good and springy, I was psyched to overcome the chest cramp and have a better race on day 2.

Long distance
I was a little worried that I couldn't shake the feeling of the diaphragm cramp on my morning jog, especially when I tried to pick up the pace, but I figured a little ibuprofen and a lot of concentration on the map would take care of that niggle, and I'd be good to go. I got in a good warmup, checking out the model event area and trying to get a feel for the mapper's style, and then it was go-time!

Alas, another day of making preventable mistakes, and not because of the orienteering - I picked up the wrong map at the start. The courses were rather overly complicatedly named, so I'd been super careful to always look for "F21" rather than "red", but evidently I wasn't careful enough. I held my map up for the guy to check, as is standard, asking "F21?", and he said "yup, red". This being the typical course that the elite women run, I didn't think to ask for clarification. The control code lined up for 1, and when they didn't match at 2, I checked on the map where the descriptions were printed, and saw that 3 was the same code again, so figured it was a misprint on the separate descriptions I was wearing on my wrist. At 3, I realized that no, it's not a misprint, I'm running the wrong course.

I sort of panicked then. The implications of running the wrong course, at the US Champs and US Team selection race, in the race that you want to run at WOC, are that you're not racing against the people you need to race against to be named to the team or to win any medals, and even if they let you start again, you can be disqualified for having already been in the embargoed terrain. This is Bad. This is why you hold up your map for someone to check that it's the right one before you run off with it.

I decided that I may as well go back to the start and see if I could start again on the right map. I sobbed the whole way back - this was the race that I had wanted to go out and crush, and leave no doubt in the selectors' minds that I was the right pick for the race, and now I might not even get the chance. I haven't been this upset in many years, maybe not since team selection in 2011. I got back, and the starter let me take my correct map and start over, asking me not to tell anyone because some people might be upset. Ya don't say.  My tear-stained face and screaming might have given that one away?!?

I set off (again), determined to prove that this sort of setback wasn't going to affect my result.  God I was just ripshit livid. I know it's my fault, and I know I should probably have been disqualified, but it just seemed so unfair, like the whole world was trying to conspire against me. Unfortunately, the anger faded on the way to the second control, and what was left was a giant well of self-pity and sniveling. Instead of finding the extra gear to fight, I was exhausted and empty, struggling to stay focused, and I made about ten minutes of error over the 95 minute race, finishing completely and utterly physically and emotionally drained.  Well, not completely - I threw a fit that I'm not very proud of on the finish line, so clearly I hadn't used enough energy out on course.

Despite all that, I'd run decently well, finishing 6th, and not that far behind the girls I was vying for the team with.  Still in it. Kseniya helped emphasize that point by walking over, punching me in the shoulder (hard!), and emphatically telling me to NOT GIVE UP. I don't give up, as a matter of principle, but that helped.
Results
Map

Middle distance
Well, two down, one to go, and in the team scoring list, I was tied for third with Kseniya and Tori.  They will definitely take three from the ranking list, maybe four, but to guarantee your spot, you really want to be in third.  No pressure.

Middle distance courses tend to be technical in the navigation - often many controls, with many direction changes and complicated terrain. OCIN did a wonderful job setting a course that met those requirements, but the hills were brutal. Despite a leg massage the night before, my calves were in a bad state, reeling from the abuse of the first day of off-trail running. I couldn't really move my feet independently, and my calves locked up pretty early in the race, feeling like they were exploding. It was frustrating to feel so physically limited, feeling like I had a lot more capacity that I just couldn't access, but I did what you should do in that situation and tried to have laser-sharp focus on the navigation. If I'm going to lose two minutes over 4.2km because I can't run up hills, I darn well don't want to lose any more time because I was stupid, too.

Things probably went as well as you can expect for your first technical training of the season. I was not 100% clean like I'd hoped, losing 30 seconds twice, and three minutes once.  D'oh! I worked hard for those minutes, just to throw them away - therein lies the challenge, frustration, and reward of orienteering.  My time ended up good enough for the bronze medal again, and, importantly, third on the ranking list!

My races, despite feeling like I was bouncing around with no idea what I was doing, were enough to earn me a start spot in the sprint and the long distance races at WOC. I am so psyched. This was not an easy weekend for me, either physically or emotionally, and I am super relieved that it worked out with a happy ending!

I like this series of photos from OCIN, the organizers: 1. Huff and puff your way up the hill, using the excuse of "reading the map" to walk instead of run. 2. Look a little desperate; is this hill ever going to end? 3. Lie on the ground and attempt to suck some oxygen back down. 4. Make it onto the US WOC team! 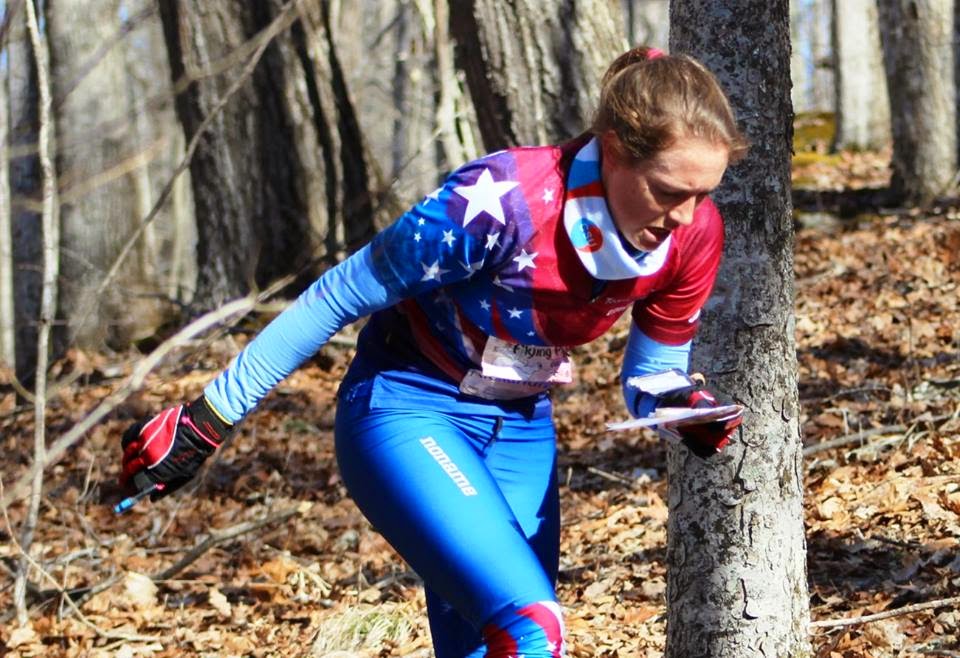 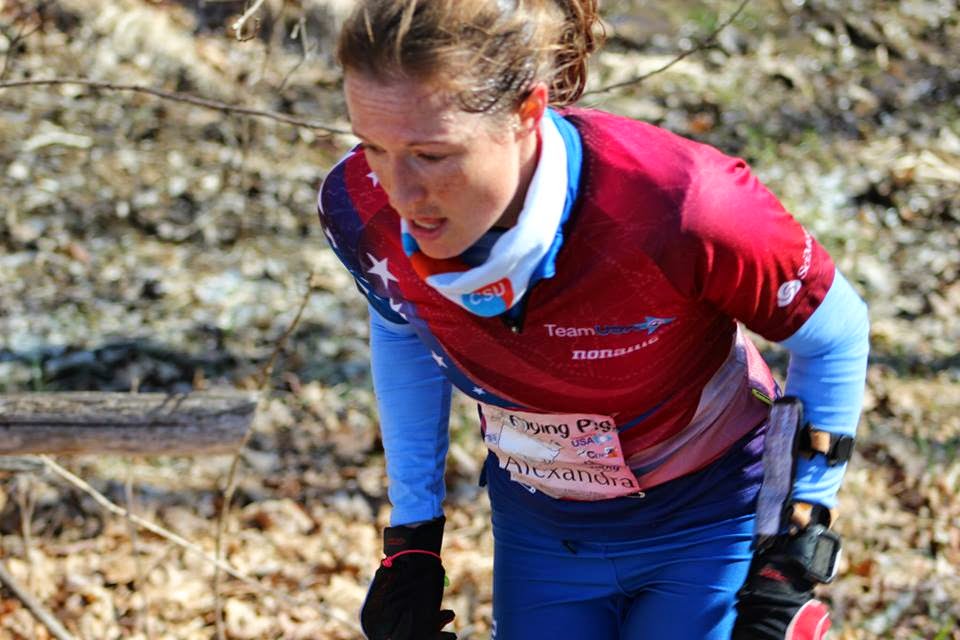 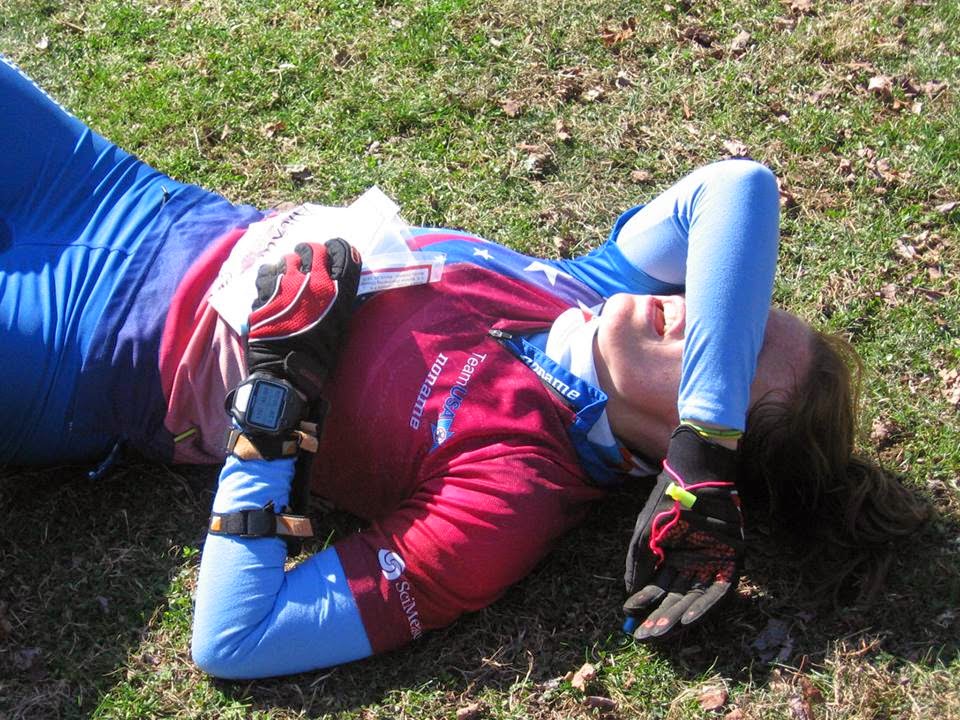 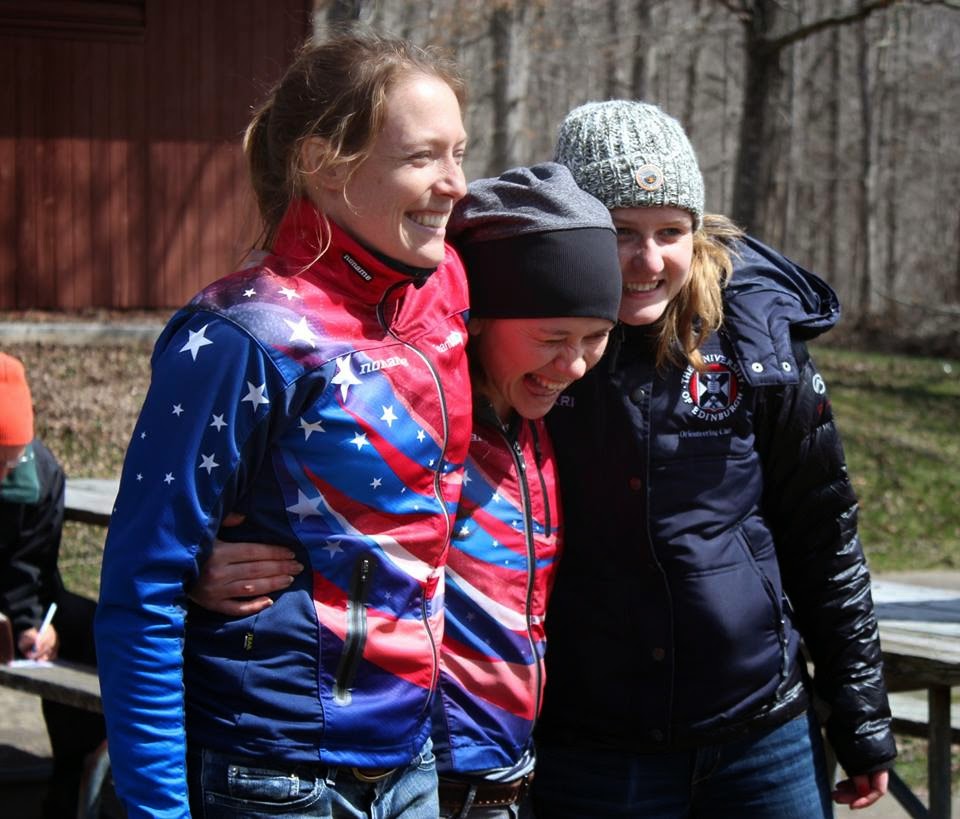 Myself, Kseniya, and Alison upon being called up for the US WOC Team. The first time Kseniya will have represented the US at Worlds, and the "home" terrain for Alison, who is studying in Edinburgh.