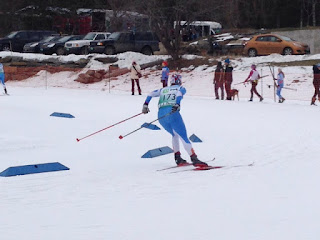 The last two Eastern Cups were back-to-back, both a hefty drive from Boston, AND both Supertour races, which means bigger names and more stress for the organizers. First up was Lake Placid - I looove racing the ladies' 5k course, but they didn't have enough natural snow, so the races were at the jumps complex. I'd signed up for both the skate sprint and the 10k classic, for no reason other than that I just wanted to race. My ski fitness (well, my everything fitness) is pretty poor right now, and given how few ski intervals I've done, I didn't expect that either race would be particularly good, by the standards I use to measure that. That said, I was sort of hoping I'd be able to qualify for the heats in the sprint - top 30. I'm pretty good at skate sprints, so that wasn't a totally unreasonable goal, and had the course been more of a skiers' course with transitions and finesse required, maybe it would have happened.

Lake Placid Eastern Cup
With my new status as an M1, I had no points to carry into the race, so I started about 5th from last again. This meant a much more chopped-up course, and many slower skiers to pass. The sprint course at the jumps is pretty brutal - up a big hill, three seconds of flat, then up more of a hill, and then you come back down. I didn't do enough warmup, partly my fault and partly because of some issues in the start pen, when two of my girls' skis went missing, and I was the only coach around to solve things. I'm sure it was an honest mistake, because there are a ton of people racing on carbonlites, but looking for your skis when you should be preparing for a race is not a good thing. We came up with a backup plan but thankfully we found both pair of [really expensive!] skis next to the timing hut. Apparently the would-be-klepto realized that he had the wrong skis, and just left them by the building. Crisis averted, but warmup also averted.

So anyway, I'm on the start line, and I KNOW how much this big hill is going to hurt, because my body is just not where it should be. Time to get my suffer on! I tried to stay light up the first big hill, throw myself into a V2 before hitting the little wall, and then accelerate as I crested the final hill, but boy oh boy was I ever wheezing by the high point of that course. Kathy and Maddy were not racing, and they were cheering their brains out at the top, pretty sure they gave me 1-2 free seconds of oomph, but I could barely stand on my feet coming down the hill. Seconds count, and I was searching for every one, but by the end of the lap I'd passed four skiers, each one taking precious time and energy to get past. As the results came out, it turned out I'd just failed to make the heats - 33rd place, and 0.23 seconds too slow. In some ways, that was quite a relief.

Sunday rolled around, and after a morning of testing and waxing and watching most of the women's field start, it was my turn. Unfortunately, I went a little too light on my klister, and thus not much kick. I could force it on gradual climbs, but there weren't really any of those, just four laps up a big ol' hill and then back down. My arms were tired, my legs were tired, my back was tired, my head was tired. I shouldn't have started the race, but I did, and I just sort of waddled around wheezing heavily until the race was over. The high point of my day might have been the high point of the course on the fourth lap.

UVM Eastern Cup
It's a long way back from Lake Placid, and with back-to-back weekends that's not much time for us to unload, unwind, and then pack up and do it all over again. I couldn't muster the oomph to do the Tuesday night race, which is saying something, and it felt like the Friday evening departure (in a snowstorm!) was here all too soon. I only signed up for the skate race, since tension is always kind of high at the last Eastern Cup of the season, and I wanted to be more available to the anxious kids and parents, waxing and coaching.

Because of the warm rain on Wednesday, we couldn't race at Trapps. I'd been excited about racing there, but hey, New England winter does its own thing. Thankfully, Craftsbury's manmade loop was holding up, and they did a fantastic job pulling off a supertour on extremely short notice. I do love racing at Craftsbury. 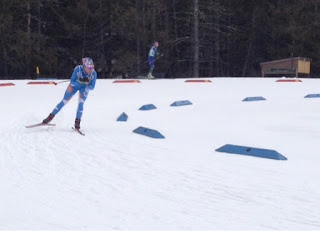 The skate race was twice around a 2.5k loop, with lots of short hills and transitions. Super fun skiing, and it skied a lot like a sprint course. Unfortunately, it was a 5k sprint course, and I didn't magically find race fitness in the last week. I started out well, catching up to a Craftsbury junior whose name was also Alex, so I felt like everyone on course was cheering for me! The second lap, they stopped cheering, which was a bit unfortunate. My energy ran out on the far side of the course of lap 2, and I still had the final climbs to negotiate. I had to consciously slow down, legs totally flooding with lactic acid and unable to get in enough oxygen. It was maybe a 15-second period of going 80% instead of 100%, but it was enough to maintain my form to the finish. Hard racing, because without long uphills, there are no long downhills on which to recover. My result was as mediocre as the race, 165 points and 95th place, out of about 220 racers, but at least I hadn't had to start all the way in the back. It's good to know people in high places.

Sunday was a long day - covered klister, with 49 skiers to wax for - left me feeling pretty whipped. But, we had good skis, and the kids skied pretty well. We've got a few weeks now before the championship races at JNs, EHS, and U16s, it'll be nice to have an actual training block. 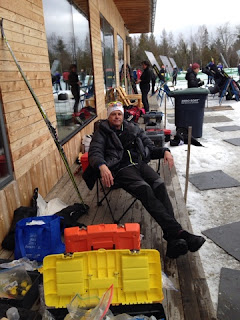 Rob, showing exactly how we feel at the end of the day after doing all those skis.

Driving home, it was still daylight as I hit the Notch. The sun had about an hour left in the sky, and the mountains just looked too beautiful, so I decided I'd probably be a happier person if I stopped driving and went for a short run. There was just a dusting of snow, and the color of the setting sun on fresh snow is one of the most beautiful things I can think of. My legs started like lead and slowly worked the kinks out as I kept trotting along, just loving that I can do silly things like go for a run in the mountains whenever I feel like it. Much better way to cap the weekend than standing in a puddle, waxing skis, with everything you own covered in klister. 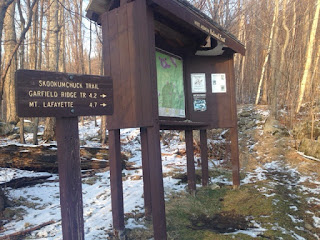 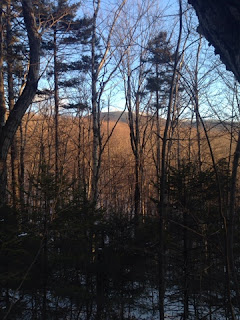 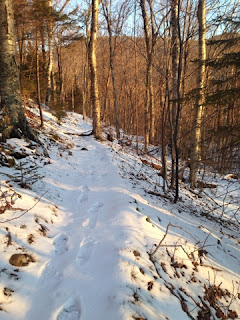 Orocs were just the ticket. Reliable grip and a low profile. Thanks Inov-8!