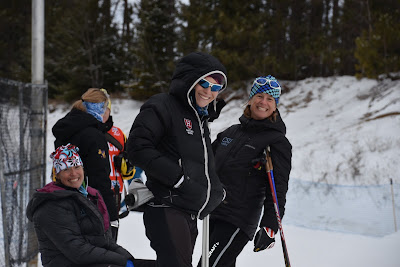 Testing klister on Sunday morning for the 10k race, I skied past a fellow coach, who asked if I were racing today. I had answered in the affirmative, probably adding some sort of self-deprecating comment like "against better judgement!" But his response, again just joking, set me off thinking.

"Give up the dream, coach!"

My immediate reaction was to laugh. What dream? Of course I'm not chasing any sort of dream by jumping into a ski race, ill-prepared and unfocused, I had figured that was obvious. It was only then that it occurred to me that not everybody feels this same need to test themselves, to suffer a little or a lot in the name of sport. For some, perhaps like my coaching acquaintance, maybe chasing that dream is all there is to it when you put on a number and toe the start line. And if you can't fight for the dream, it's not worth the effort.

Lake Placid is very far away from Boston, leaving many hours with which to contemplate why I race. I had thought it was an easy question, but the more I thought about it, the more complex the question became.

At the crux of it, I race because I love pushing myself as hard as I can, seeing what happens when I reach my perceived limits. The answer is never the same.

Over the years my obsession with racing, aside from continuing to be a relatively healthy outlet for my overly-competitive nature, has definitely shifted. I used to be chasing some sort of dream, doing this for some goal that I had attached some meaning to. There is still some of that, but ultimately racing has become my way of testing myself. I have no idea what I'm measuring myself against, but in some ways, that really doesn't matter. I know I'm looking at the beginning of the end of being able to topple my own physical records, but that doesn't give me any reason to stop. I've never really been consciously trying to prove myself to the world, but I'm sure there is some of that, underlining good results and bad.

Maybe it all comes back to how much I just love winning. It doesn't happen very often, and I've never really chosen things that I'm inherently good at. I think I'd rather have that obsessive need to be first come out on the track than at the office. Does the masochistic need to suffer up those damn hills faster than my competitors really make me a better person Monday through Friday? If all I want is to be on the top step of the podium, why aren't I just entering local podunk races where nobody attends?  What the hell am I doing on the start list of a Supertour, lining up against the best?

It's more than winning, then, that keeps me coming back. I suppose all comes down to the suffering - there is nothing else, in my convenient modern life, that causes me to push beyond my preconceived limits. It doesn't matter what the results say, because when I'm striving against the clock, totally zoned-in and focused, I am more alive than any other time. It's not a dream I'm chasing, it's flow.

But maybe, racing is just some sad excuse for providing a reason to obsessively exercise, the dark side of some sort of controlling disorder, yet-to-be-diagnosed.

I claim that I can quit at any time, but I think we all know that's not true.
Posted by Alex at 1:17 PM

"When I'm striving against the clock, totally zoned-in and focused, I am more alive than any other time."

Well-put. This is why I decided to make today's workout at Rangeley a TT consisting of four laps around the identical course during which I tried to make each lap a little faster than the previous. I'd say I enjoyed this self-test about 90% as much as I would have had the 25K race I signed up for actually taken place.

And you're also right about continuing to push as hard as possible even when your best results are a distant memory. I can say that with some measure of authority as I'm turning 65 a month from now.