Last weekend was the first domestic orienteering race of the season for me - the Troll Cup, hosted by local club NEOC. The races were down in Foxboro, which meant typical coastal Massachusetts terrain - thick vegetation and interesting rock features. I really haven't gotten a chance to race much, and given a slow come-back from Achilles tendinitis I didn't feel like I was in the shape I wanted, but I was really psyched to put on a bib and stand on a start line!

The format was three races, and the times from all three races were combined to determine the weekend's winner. Saturday featured two middle-distance races, and Sunday was a "classic" distance race. The Saturday races were technical, lots of controls and a detailed area of the map, while Sunday was a little bit faster terrain. NEOC ordered up some amazing weather, warm and sunny but not TOO warm, and it was overall a fantastic weekend to spend running in the forest. 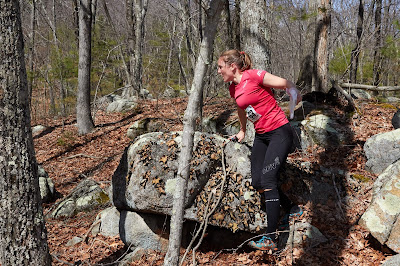 Hunting for a control, having come over the hill not quite how I'd expected. Thanks to Dave Yee for the photos!

The race started pretty well for me. My goal was to move carefully and nail the navigation, and with the exception of about 20 seconds that I dropped in a directionally-challenged moment on the way to 16, and about 40 seconds of hesitations over the course of the race, I had a very good run. It was enough to beat nearly all the men on my course (just 2 seconds back from Andis), but third for the women, behind a visiting Ukranian and my US Teammate Hannah. But, I was pretty close in time, so with two more races, I thought maybe I'd have a shot at making back the time!
Results 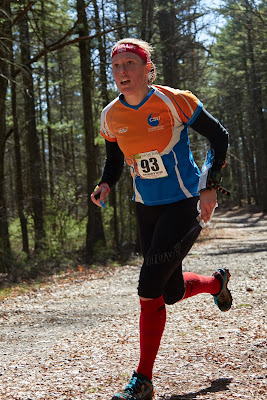 The second race of the day showed me how not in shape I am. Not only did I struggle to go fast, but my physical fatigue bled into my ability to navigate smoothly, and I made many more little mistakes and hesitations, which add up dangerously fast. This time, many more of the men beat me (I'm racing the M-40 and M-20 classes, so not the elite men), and I was again 30 seconds behind Hannah. Luckily, Polina, the Ukranian, made some bigger mistakes, so I beat her soundly.
Results

Classic Distance
So after two races, I was sitting solidly in second place, 58 seconds behind Hannah. I typically perform better than her in the longer races, but she's in good shape right now, and has many more races under her belt already this winter. Nothing was guaranteed. I got ready to run aggressively, happy to discover that my legs felt pretty fresh this morning. Let's get after it!

Click the map to zoom in and see my route

I unfortunately took the attitude of getting after it a bit too much to heart, and ran out of my comfort zone and into my mistake zone. No increase in speed will make up for mistakes, and I made some 7 minutes of mistakes. Not my finest showing. I was essentially even with Hannah at control 11, but then dribbled away time on some poor exit directions and other execution errors in the next few controls, finishing about a minute behind, instead of a minute ahead. I'm disappointed, because obviously I hate losing, but it's great to search for your limits, find them and surpass them, even if it means you sometimes come crashing down. I'd rather try and fail than play it safe. Polina beat us both again, but luckily not by enough to edge me out of second place, so I hung on to that silver medal.

Next weekend is the West Point National Meet, so hopefully I can redeem myself, and refine my ability to find that racing edge without blasting past it!
Posted by Alex at 3:03 PM