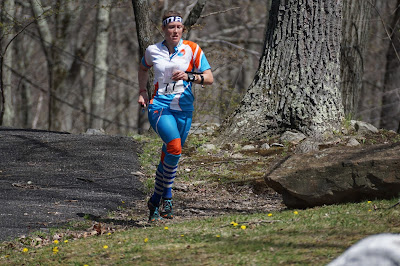 Maybe some day, West Point will go really well for me. I had high hopes, feeling like I had a handle on work and life stress, but apparently my body hadn't quite caught up to where my mind thought it ought to be, and rebelled in the form of super tight calves. I used to think that the whole mind-body connection was just a bunch of mumbo-jumbo, but the old me was wrong. Anyway, it was a gorgeous day, not too hot and not too cold, and we were running in Deep Hollow, which has very nice forests.

Middle Distance
This was, overall, a satisfactory race. Unfortunately, I was unsatisfied, because I didn't want satisfactory. I wanted a good race! I went through all my pre-race routines with a good attitude, only a small niggle of worry about my calves, which were still sore from Wednesday's workout.

The race started with an uphill, and I quickly discovered that the sore calves were actually a problem. In an example of some of the worst behavior they've exhibited in many months, they totally locked up on that first climb, aching and exploding and generally just limiting my ability to run. Arrrgh! Palpable frustration.

As we all know, if one thing hurts, the best option at that point is to make something else hurt worse, to take your mind off the pain. So naturally, running up this stupid hill, I stepped on one side of a flat rock. It was a wiggly flat rock, and the other side flipped up just as I was swinging my foot through. Rock-foot collision, and I think the rock won out. I was left gasping for breath and wondering if I had broken my foot. Thankfully, after a moment I could wiggle my toes, so the only real casualty was a ripped shoe and broken shoelace. Carry on, kid, enough histrionics.

Now my foot hurt enough that I didn't notice my calves as much. Success? It didn't mean I could run any faster up the hills, and after making three 20-second errors on the first three controls, I'd blown the navigation, too. I made another mistake on the way to 7, when my internal compass got really confused, and disagreed by 90 degrees or so with my physical compass. Luckily, I had the presence of mind to stop and figure it out. Could have been a worse race, but certainly not what I was hoping for, and when I saw the M-20 runners finishing 10 minutes faster than me, I started feeling pretty bad about my performance.

Sprint race
That afternoon was a sprint race. In hindsight, I should not have raced, because my foot really hurt, with a big old lump and an ugly bruise already. But I got my [ripped] shoes laced up, so I figured maybe I could get some redemption for the morning's race. I gave my calves a longer warmup, and a pretty good massage, but they were just as bad. Grumble.

I was just slow, through the race, but then to add to my frustration with being slow, I took control 20 out of order. You have to go in order, in this sport, and when I realized I'd gone from 19 to 21, and had to back track to 20 and then REDO 21, I nearly cried. Race over. I plodded through the remainder of the course, upset at myself and my body and my inability to pull together a good race when I wanted to.

We had a very nice dinner at Kseniya's house, and I figured we'd get to bed early and be all well rested for Sunday's long distance race. Unfortunately, my bruised foot decided to make itself known (maybe the afternoon's ibuprofen had worn off), and I woke up around 2am with my foot throbbing painfully. I was out of drugs, and my foot hurt too much to move it, or bear any weight, or touch the bed. I sat on the floor, massaging my foot with an ice cube, surrounded by a growing puddle of cold water and my own despondency. This weekend had not started out how I wanted.

Long Distance race
Luckily, 2am is usually the worst time of day for all emotions. I slept a few hours, waking up to discover that I could indeed walk. May as well race!

My calves felt better than Saturday, and I was excited to test myself against the physicality of this course. I'd been to Turkey Mountain before, and it didn't go too well. Here's a chance for redemption!

I merrily trotted off toward the first control, enjoying the sunshine and the open visibility and the beautiful hills and rocks and things, but I made a massive parallel error. After maybe 5 minutes of headless wandering, I realized that I was definitively NOT where I thought I was. At this point, the thing to do is to go to a big obvious feature and relocate. I ended up pretty much running all the way back to the start before finding myself. Ok, try this again. This time, I found the first control. Well, THAT wasn't how I meant to start this race, either!

I tried to bring some effort to the rest of the course, telling myself that everyone makes mistakes, and maybe I can make up for those 12 minutes lost if I just nail the rest of it. But, the fight had drained out of me, and maybe it was my subconscious speaking up about the fact that I didn't really want to be racing, but I could no longer find it in me to push hard. I gave in. Walked every step of the climb up to the 5th control, and figured that actually, I felt pretty good moving at an easy distance pace, so I just stayed at that pace, enjoying my ability to run through the woods and find controls. I love finding controls! It's what makes orienteering so much fun! This attitude powered me through the rest of my run, but I finished way down in the results list. I decided not to look. It was easier than dealing with the fact that I'd blown it, three races in a row.

It sounds rough, but really, I had an excellent time last weekend. You can't let a bad race ruin a perfectly fine day, so I didn't. Not one to brood, I really enjoyed hanging out with all the wacky people in the orienteering community last weekend, and the gorgeous summer weather certainly didn't hurt. Thanks to West Point for hosting yet another national meet! Maybe some day, I'll learn to race well here. 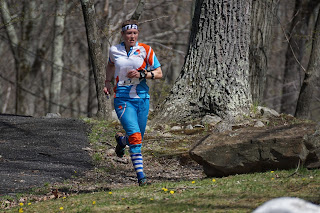