Ed and I had so much fun hosting the Boston Sprint Camp last year that we decided to do it again this year. New year, new parks, so this meant a lot of mapping for Ed. I just sort of watched from the sidelines, not doing any advertising like I should have, and grumbling about having to stay up too late designing courses. Oops. Like last year, we had US Director of Sport Development Erin Schirm here to help with running the camp, and his input was invaluable. Over four days, camp participants were exposed to a wide range of techniques and tactics for how to do your best at orienteering sprints. 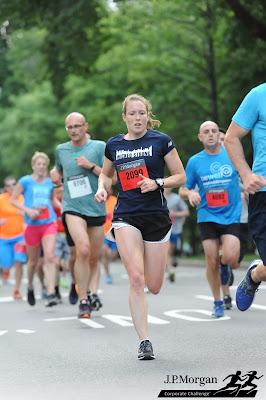 But then, I missed the first day of Sprint Camp, because I'm responsible like that. It was the same day as the Chase Corporate Challenge, and my company had a team, and I wanted to run. I guess if people are going to think of you as the runner at work, you occasionally have to do races they can understand. That was a really cool race. I've never done a race before where you are running with thousands of other people, of all shapes, sizes, and abilities (9,475 people!). Seeding the start would totally ruin it. I did push my way as far forwards as I could. It was unbelievable - thousands of people were staging on the Boston Common, trying to make it through the gates onto Charles Street. As I weaved my way forwards through the crowd, most people didn't seem to mind, since most slower runners don't necessarily want to start in front of a faster one. Or maybe they didn't think that somebody would have the gall to try and squeeze past 3000 people before the race even starts! Either way, I got just about even with the start clock before it was time to race.

Even being up by the line, it was six seconds after the gun before I started moving. Luckily it thinned out quickly, and by the time I had made the left turn onto Arlington St I was running as fast as I wanted to. I was still doing a lot of weaving back and forth to get around people, but at least the crush of runners made the wind disappear. 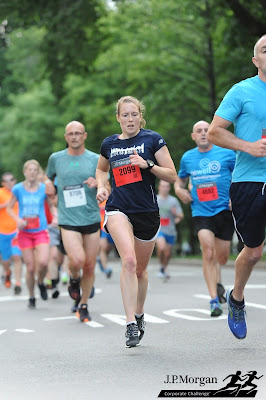 My goal for this race was only to finish in good health - I had no idea what to expect, having never run a race with this many people before and having never done a 3.5-mile race. Talk about a random distance. The last three flat running races I've tried to do this spring have not ended well for me - I got a side cramp in a time trial back in late April, and that stupid cramp has been shadowing me through every hard effort since then. The first time, I had to quit 1000m short, unable to finish the time trial. Two weeks after that, I had actually paid money to enter a race, so even though I had to come to a full stop 500m before the finish, I eventually hobbled across the line. In tears. Two weeks after that, in another 5k, the cramp attacked with 300m to go, and I managed to keep hobbling to the finish mostly upright, but really only because my mom was watching and I didn't want to scare her. So with each race effort, the cramp has held off longer, but it definitely had me worried. Since I've been running cramp-free lately, my hopes were high that maybe I finally kicked it.

I hit the first mile a little slow, 6:43 or something. But my watch was ticking off 4-minute kilometers, so I figured that was just 20 seconds that I'd wasted at the start. We hit the 2-mile mark somewhere after the turn-around at Kenmore, and the crowds were starting to thin out now. It was much nicer to run with other people my speed, though I was still passing 10 for every 1 that passed me. My watch beeped at the 4km mark, and I was nervous - now is about when the cramp starts to make itself known. But stride after stride, I was blissfully pain-free. I cruised past the 5k mark around 20:00, starting to contemplate a kick, but I was feeling a little too flat to make it actually happen. Still no cramp! The crowd was deafening along the final stretch, but I still managed to hear my colleague Terri cheering for me. Eventually I found the finish line, and I guess I finally outran the cramp monster! I ended up 23rd woman.
Results

Sprint Camp
So, Corporate Challenge over and done with, it was time to join Ed back at Sprint Camp. Friday was based in Newton, with the morning a pile of exercises at Skyline Park and the afternoon a partner sprint relay at Nahanton Park. Friday morning was definitely an intense one - we did a micro-o, some hill sprints with map memory, a maze-o, and a regular sprint course. Pizza for lunch, and then a bit of a nap in the park before it was time for the afternoon. I tried to pair people up based on their results from the race they'd all done on Thursday night, but the back of the pack tends to string out a lot more than the front, so that wasn't totally fair. But since everyone's times were recorded individually as well, nobody seemed to mind too much. I was really enjoying the atmosphere at the camp, people seemed to be genuinely enjoying themselves. 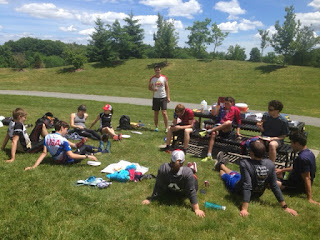 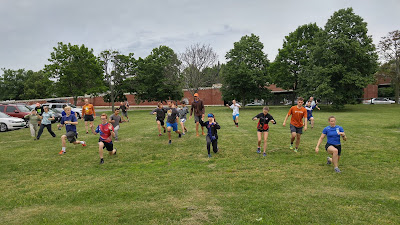 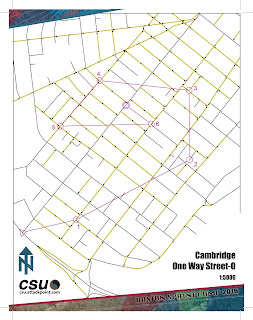 Saturday was based in Cambridge. It was another pretty intense day of sprint training. We started at Magazine Beach, with a dynamic warmup (above), then some exit direction practice. Erin was on hand to offer advice, and then we were off on a street-o, but with the directional information on the map. You basically had to run pretending you were a car, and couldn't go the wrong way down a one-way street. Pretty fun exercise, because you're solving a puzzle as you're running. (see left for map). The street-o ended at Dana park, a dinky little neighborhood park, where we did some sprint intervals. Super fun, but at this point my legs were starting to feel wrecked. Three hard days in a row! Then back to Magazine Beach, where we ate lunch (from Clover) and I gave a brief goal-setting workshop. 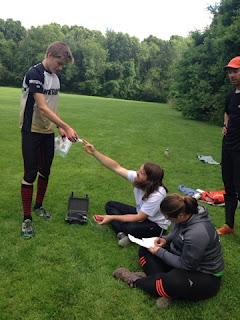 The evening race was at North Point, and I had set it to have as many tricky traps as I could. Quite a few people got caught, ending up on the wrong side of an uncrossable fence because they hadn't checked their control descriptions, or running across the wrong bridge because they hadn't looked at the full leg. Great to push the comfort zones! 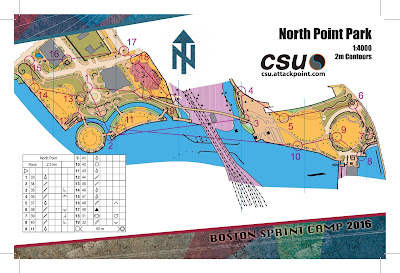 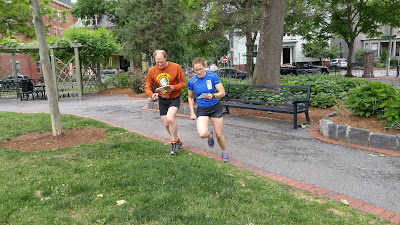 Sunday was the double-header National Meet, a qualifier and a final sprint, at Franklin Park. I thought the final in particular was a really nice sprint, and so I went and pre-ran the race just to feel it at speed. A lot of people made some big mistakes in this race, I think through a combination of tiredness and laziness - you have to approach each race with a sharp mindset, and if you let yourself get lazy on any of your sprinting habits you'll pay the price. But overall, seemed like every runner got a lot out of the camp, and we're already laying the plans for next year. 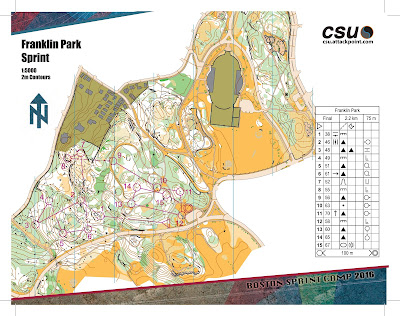 Results from most of the sprint camp races are here: Results
Posted by Alex at 3:10 PM

Thanks for the great post on your blog, it really gives me an insight on this topic.

Thanks for helpful article! https://virtual-staging.archicgi.com