Every year, the US Orienteering Team holds a set of trials races to determine who will represent at the World Championships (WOC). These races also determine which events you'll race at WOC, but ultimately you have to perform well at Trials, because there is very little flexibility when it comes to being named to the team. So the pressure can be a little high, at times.

This year, Ed and my friend Becky were organizing the entire Team Trials weekend. It's a bit much for two people to take on, between finding venues, getting permits, setting courses, and making a new map for the sprint race, but they did a stellar job. I knew that I'd be running on some awesome courses with Becky's course setting, and I knew all the details would be taken care of with Ed around. But it was painful watching the effect of the stress on these two, and not being able to do much about it, since I wanted to race at the Trials, so couldn't help out with any of the bits that would affect my knowledge of the courses. 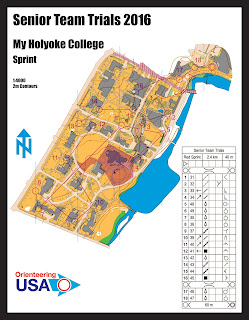 The first race of the weekend was at Mt. Holyoke College, in western MA. Orienteering sprints are generally 2-3km long, which doesn't exactly qualify them as "sprints" by track and field standards, but I guess compared to a 15km race that's short. I was a little anxious before the sprint, because I really haven't been on many urban maps lately - it's been a lot of forest and grassy parkland, which is fun, but doesn't provide the same potential for "traps" - those complicated route choice options that tempt you to go one way, only to find that you can't get through a building or a passageway. Making the right choices is hard when your legs are stealing all the oxygen from your brain!

I started ok to the first control, but then I totally blew it on the 2nd. (map). I was taking too long reading the map, and ran past the building I was supposed to use as my attackpoint without seeing it, and popped out into a large circular road. I saw this, and completely panicked. I could see that road on the map, but could not for the life of me figure out where I was relative to it. I ran like a headless chicken back to the little pond, then back to the road, completely unable to figure out what was going on. What a lesson about what panic will do to my ability to function logically! Luckily, I found the control, but that was a 20-second mistake, which is pretty bad in a 13-minute race. 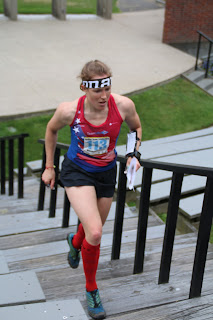 I was still flustered from 2, and made a poor route decision to 3, unable to see the left-hand shorter route. Luckily, I pulled myself back together after that, and started hunting down the girls ahead of me. In the words of one of my teammates, "you were MOTORING!" Of course, the faster you run, the harder it is to think, and I outran my thinking ability by control 15. I lost 10 seconds on the 16th control, and then a whopping 30 seconds on the 17th control. All things considered, this was a nearly disastrous sprint, only salvaged by the result - I managed to sneak into 3rd place among the Team Trialers. Yikes, I have some work to do in that discipline.

Long Distance
I spent the night in a lovely old farmhouse in the middle of nowhere (I think all of western CT might be the middle of nowhere), with a pile of other orienteering friends, and we woke to a hot and muggy day at Pond Mountain. I really want to run the long distance at WOC, so I was probably putting unnecessary pressure on myself for this race. Running like I had something to prove, but it turned out that pace wasn't sustainable in this weather.

My plan for the race was to nail the navigation. I knew Becky would set a tricky course, so my mental cues were "control, attackpoint, route." Expand the control circle in my visualization, have a solid attackpoint that I can run confidently to, and choose a good route to get there. Foolproof!

I had the advantage of being the last starter, of the eight women trying out for the Team. This meant that if I saw anyone in the forest, it meant that I had caught up to them, and that's always a relief. With a 3-minute start interval, it was unlikely I'd see too many runners, but you never know what is going to happen in a long distance race. At the start, I saw that the first control would be hard - a diagonally downhill approach to the bottom of a cliff. Hindsight tells me that I should have chosen a different route, to give me a better attackpoint, but at the time I thought I was doing it right. Unfortunately, I lost contact with the map, and spent two minutes wandering on the rocky hillside trying to put two and two together. Eventually I figured it out, running into Hilary, who had started 6 minutes before me. Well, I guess she had even more trouble than me. Time to put that behind me, and focus on the next leg!

Hilary and I were loosely together for the next four controls; usually taking slightly different routes but arriving at the same time. Hilary is a much stronger runner than me (she is an Olympic-caliber rower!), but my navigation is a little better. I knew that we were both going faster because we were together, with Hilary pushing the pace and me nailing the navigation when she'd slow down. It's the luck of the draw, I suppose, that I had caught a faster runner who had made an early mistake. 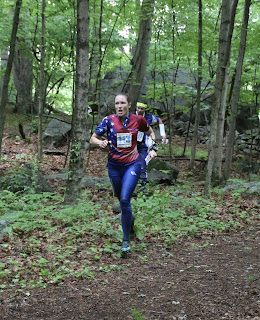 We ran into and past Alison around control 3, and then it wasn't until control 7 that I saw another runner. I was alone at this point, having lost some time at 5 being a doofus, but I could still catch glimpses of Hilary's back, and could tell I was closing back down. I crushed the downhill to 8, making contact with Hilary again and catching up to Cristina, from 12 minutes up. I knew I was having a good run at this point, so knew I had to keep the focus for the final push. At this point, I knew I was in either 2nd or 3rd place, depending on how Kseniya was running.

We had some serious climbing in the final parts of the course, and I could feel the humidity lying on my lungs like a sponge. I splashed through a stream climbing to 11, throwing the water over my head and down my back, trying desperately to cool myself. It wasn't really working, so I had to back off the pace a little on the long slog up to 12, but I was pleased that Hilary wasn't pulling away; despite clearly being a better climber she was moving more hesitantly. The final loop of technical controls was hard, but my approach was to be careful and deliberate, and with the exception of 16 I was spiking them.

At the finish, I was pleased to see I had landed in 2nd place for the day. I had dropped nearly 7 minutes in mistakes (yikes), but it was enough, and I felt strong despite the heat and humidity, with no cramping. It was definitely a relief to be in a very good position to make the team heading into the final race.

Middle Distance
I took my recovery very seriously on Saturday. First stop: ice cream. Next stop: swimming hole. Next stop: dinner with a bunch of friends! In all seriousness, though, being in a good spot mentally is very important for this sport. I spent a while going over my Long Distance race with my coach, and we agreed that a large part of why I lost so much time was that I wasn't being nearly as deliberate as I thought I had been on my approach to each control - I didn't have a good picture in my head of the circle, and that led to extra hesitation and the occasional wander. So, the goal for today's Middle Distance was to keep the pace low enough that I could really visualize the controls before I arrived. Middle Distances are tricky beasts, technical and detailed, so I needed to be 100% clean! 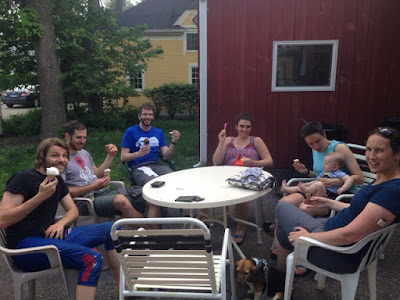 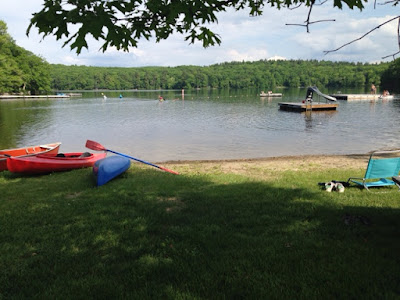 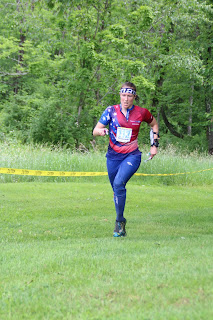 Things started out a little shakier than I'd hoped, with a small bobble on both of the first two controls. But I kept my head in it, and things started to click. I could see some girls ahead of me on the climb to 5; Cristina, Evalin, and Hilary were all within reach! Unfortunately, I made a totally idiotic choice to go to 6, through the green blob of mountain laurel, and this cost me nearly 2 minutes. I was on my hands and knees crawling through that shit, berating myself out loud for being a dummy and yelling "EXECUTE!" every few moments, to keep it focused and together. Argh.

I kept it together, though, visualizing the circle, picking good attackpoints, and pushing the pace juuuuust enough, and I caught back up to Cristina at 9, Evalin at 10, and Alison and Hilary on my way to 11. I could feel the effects of the last two days of hard racing; my legs were toast as I slogged up the hill to #13, and my oxygen-deprived brain made a stupid 35s error in the circle. But I managed to spike the final controls, and finished the race feeling good about it. All told, I was in the bronze medal position, with ~3min of error, and I was only 4 minutes behind Sam, 40s behind Kseniya, who is somewhat of a middle specialist.

The Team Trials scoring list is based on the points garnered from each race, which are based on the time behind the winner. I had a 3rd, 2nd, and 3rd placing, and this was consistent enough to name me a clear 2nd place behind Sam. The top two spots on the list got an automatic berth to the World Champs, and I've been selected to run all the races that I wanted to - Long Distance, Relay, and Sprint! The final women's WOC Team:

This will be my sixth time representing the US at the World Championships (plus five times for ski orienteering!), and the excitement feels as fresh as the first time. I have a lot of work to do before August, but I have confidence in my abilities, and I am hoping to meet my high expectations for myself. Here goes! 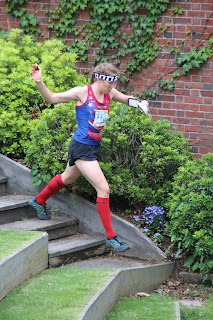 Running up stairs is great. Trying to run down stairs is beyond awkward. 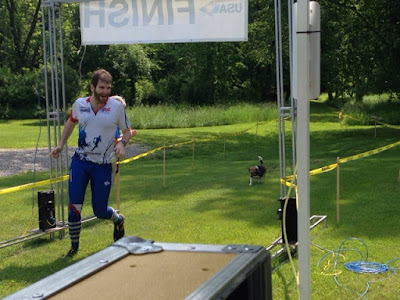 Coach Boris and his beagle Barney pre-ran some courses. Barney is more of a short-distance critter, but appeared to survive the courses.