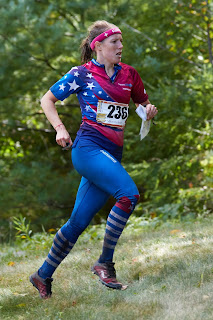 The North American Orienteering Championships (NAOC) is an event that happens every two years, and the hosting country alternates between Canada and the USA. This was my third time competing for the US at NAOC, and this was the competition closest to home, taking place in Hanover NH. I'd previously skied at Storrs Pond, but I'd never been there in the summer, and likewise had never been to either Burnt Mountain or the Dartmouth Campus, except to visit as a High-school senior years ago. No home-court advantage, but I know what NH forests are like, and that familiarity with the terrain is an important factor.
Middle Distance
The first race was at Storrs Pond, a middle distance race on Friday afternoon. I timed lunch poorly, having packed it in the trunk of my car and not stopping partway up to get it out and eat it, which meant I got really hungry, and then ate too much too fast too soon to my start. Rookie!

I knew that this would be a technical area, and with 22 controls over 4.5km, I had to have a laser-sharp focus the whole way. Maybe the sloshy stomach helped, because I didn't think about my physical state ever, except maybe once when I was wondering who was behind me breathing so heavily, and realized it was me. The race itself was fairly uneventful, and I calmly executed my plans and found controls and never really felt like I got moving all that fast, because I couldn't do that and stay in contact with the map. I made a 45s mistake on the penultimate control, but otherwise ran a very clean, safe, and controlled race, and it was enough to put me into fourth place overall, ahead of two of my long-time orienteering idols: Ali and Sam. I wished that they had had better days, but that's why we race as a team, and Hannah and I did what we could against the Canadians.

Map - You can turn on people's names and view an animation as they move through the course. I was on the Red Y course.

Results. The top six get medals, so this was technically my first IOF "Diploma." Cool!

Long Distance
Saturday was the Long Distance race. I was pretty excited for this one, although I had heard some ominous rumors about the map legibility, especially at 1:15,000 scale (the elites are assumed to have the best eyesight of all the orienteers, as well as the longest route-choice legs, so we're given a smaller scale so that the full course fits on a reasonable size of paper. This is an IOF rule, which sort of sucks in a place like Burnt Mountain, which is a suuuuuuper detailed map). I went out on the model event briefly, and discovered that in the dim lighting under a mature hemlock canopy (most of the map), I couldn't read the map very well, even with my magnifier on it. Yikes, this was going to be an interesting day.

I showed up to the start line ready to go, operating under the assumption that course setters always save the worst terrain for the model event. The actual race was going to be fun! Alas, I had no better luck reading the map during the race. In my defense, the map was also "overmapped," meaning there were some tiny rock features on the map that didn't belong there. The printing was also not great - the contours and the rock features weren't crisp, meaning sometimes one boulder would sort of bleed into another one, especially at 1:15,000. I had hoped that the IOF event controller would catch things like this, but not so much. With all the black stuff on the map, it was hard to get a sense of what the land was actually doing with its shapes.

Anyway, everybody has to race on the same map. I could have spent way longer whining about it, but instead my mission for the day was to find those little orange flags as fast as possible. I taped my ankles better today, so felt more sure-footed, but my inability to properly interpret the map meant that I just couldn't move too fast. So frustrating! I left about 3 minutes of mistakes on the course, but mostly, I was just slow. I'm not very proud of that race, but I still snuck onto the podium in 6th place, way, way waaaaay behind Emily Kemp, the winner.

Sprint Race
The final race was on the Dartmouth Campus, the sprint race! I felt like I needed some redemption, after Saturday's sad little slog, and I was feeling good, really peppy legs. I did a good warmup, and had my mantras set. Go-time!

The course was interesting enough for a campus sprint, but relatively straightforward. It was feeling like a straight running race, almost, as it should when the navigation is flowing smoothly. By the fifth control, I had just about caught Tori Owen, the Canadian who started ahead of me by a minute, and that of course helps with the confidence. I felt strong across the Green and into the final bits, that were really hilly. Oof! Unfortunately, as I came rolling down the hill to my penultimate control, supposed to be on a tree, I spotted a different course's control, on a tree, next to the same road I was on, and I punched that one. I had checked the codes, but my race brain apparently couldn't differentiate between code 78 and code 71, and so I mis-punched. There's a big fat DSQ by my name now, so much for redemption.

Sprint Relay
The Deciders for the relay teams decided that I was still a good choice, though, so I was on the second relay team for the US, with Tori Borish, Michael Laraia, and Ross Smith. Our first relay Team was Sam Saeger, Anton Salmenkyla, Greg Ahlswede, and Ali Crocker, putting all our eggs into that basket - we were a ways behind the Canadians at this point in terms of the Bjorn Kjellstrom cup.

Tori took us out with a very nice leg, though she says she made a mistake, and finished about 45 seconds behind Sam, who was leading the pack by a solid 15 seconds. Michael had a good run, pulling back a team or two, and Ross hung on to fourth place, coming in just over a minute behind team Canada #2 (both first teams were out in front, battling). Tori Owen was the anchor Canadian for their second team, and I'd made up a minute on her in the morning, could I do it again? 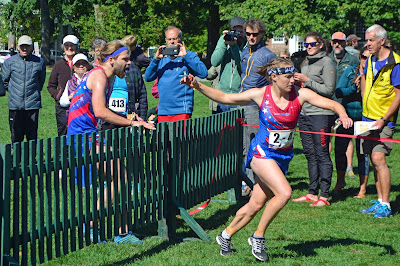 The key in relays is to keep your head screwed on straight and to not mispunch. So in some sense, I was running very carefully, but honestly, I was in full hunting-mode. Hunting down earlier starters is my wheelhouse; I swear I have a higher VO2 when I'm hunting. 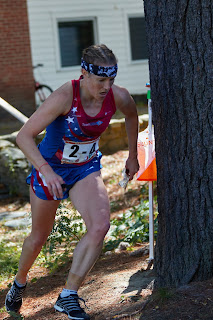 With only a 2km course, this would be over quickly. I was pushing for every second, and as I approached control 6, and in-and-out staircase situation, I saw Tori. Good. I had closed the gap by the 9th control, and then she took a slightly better route to the spectator control, and led us across the field. I chilled out behind her, catching my breath and reading ahead. Amazing what 30 seconds at a slower pace can do for your recovery. The next time we took different routes, I punched it. The thing about orienteering is that if the person behind you can see where you are, they'll be moving faster, as they don't have to navigate, they just have to follow. So, if you're trying to create a gap, you have to do it very decisively. 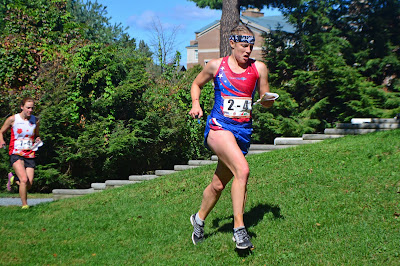 I could feel Tori on my heels at the 15th control, but surged again around a building, using the corner to create more distance, and I couldn't hear her breathing anymore at the 17th. At the 18th, an in-and-out deal again, I was already out and leaving as she approached, and this let me relax a hair into the finish, knowing it wouldn't be an all-out sprint.

My anchor leg put us into third place, but then it turned out that our first team had mis-punched, one of the runners going right past the spectator control without punching it. Darn! We could have used their points, but this moved my team into second place, and top US Team. I suppose that's racing. 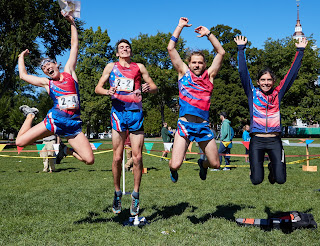 A job well done. When Ross says jump with your hands in the air, that's what you do. 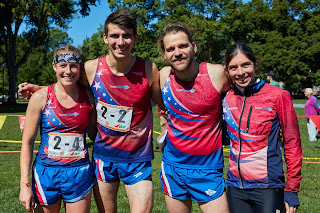 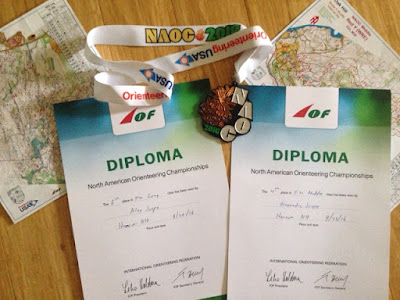 In the end, this was a very enjoyable weekend. Great weather, really nice courses, and so wonderful to see all my friends and teammates and absorb the good vibes of everyone there. This was a really nice way to wrap up my competitive international career - I'll still be at races all over, because that's what I do, but I think I'm done wearing this brightly colored stars-and-stripes uniform, at least as a senior athlete. Maybe I'll come back as a master, but I need to be done with the pressure, the intensity of training, the drive of results, my expectations pushing my body harder than it wants to go. Time to refocus on what brought me to this sport in the first place - the joy of the sport itself, and the wonderful people who do it.