Miles to go before I sleep

Fall is finally happening! It took a while, but we're finally getting frostier mornings and some leafy colors. My long runs lately have been had me thinking poetically, and lately I feel like Frost is hitting home. 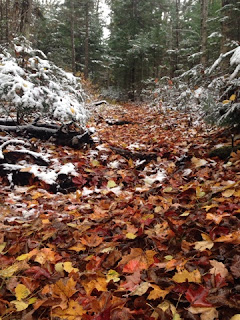 Whose woods these are I think I know.
His house is in the village though;
He will not see me stopping here
To watch his woods fill up with snow.   My little horse must think it queer
To stop without a farmhouse near
Between the woods and frozen lake
The darkest evening of the year.   He gives his harness bells a shake
To ask if there is some mistake.
The only other sound’s the sweep
Of easy wind and downy flake.   The woods are lovely, dark and deep,
But I have promises to keep,
And miles to go before I sleep,
And miles to go before I sleep.


I made a poor choice in June, and signed up for a 50-miler in November. Given my taper schedule for the late-August/mid-September races, I had about six weeks between North Americans and the Stonecat 50. This is maybe time for 4-5 long runs, and long runs are supposed to be the backbone of ultra training. Six weeks is not enough time to train for an ultra, but somehow this seemed like a good plan in June. So while I do feel woefully unprepared, it has been a fun journey nonetheless, collecting miles like pokemons. 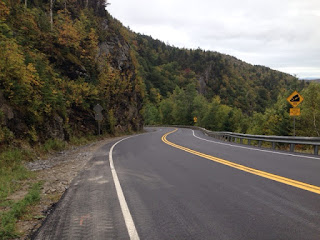 My feet have taken me some cool places lately. To be totally honest, I have no need of vertical, because the Stonecat course is basically flat. I didn't realize that when I signed up, or maybe I would have thought twice. Running up mountains is a lot more fun than doing loops on a flat and marshy trail, but I wanted a local-ish 50-miler. Despite not needing vertical, I go to the mountains whenever I get a chance. One of those chances was at Ali's wedding - naturally, she joined in a running-appropriate version of a wedding dress :) 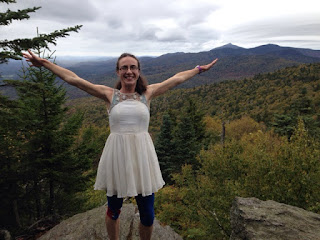 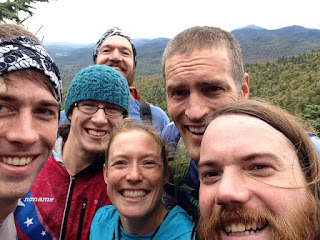 Favorite sort of selfie! Camel's Hump in the background. 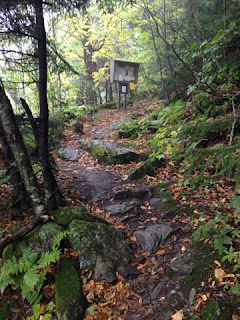 For some reasons, I couldn't get any takers for a Sunday morning four-hour jaunt in chilly clouds. It was beautiful and meditative. I'd never been on that part of the Long Trail. 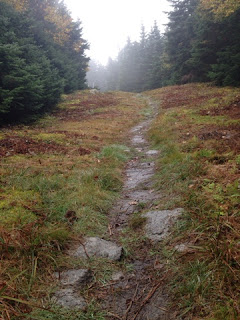 Back in Boston, more miles of flat pavement. At least sometimes there are nice views - from across the river, the city looks clean and modern. Can't see the rats from over here! Ed and I did a scavenger hunt a few weekends ago, thanks to a free entry. It was as gimmicky and ridiculous as we expected, and it was also kind of awesome. 100 riddles, once solved, gave 100 different locations around the city. You could run or bike or take public transit to get to these locations, take a geotagged photo, and try to unlock points and levels and get free stuff. It ended with free beer at the Harpoon brewery, and it was a long day - 11 hours of scavenging. We spent about an hour sitting there answering riddles before we got moving, and then we only walked - we had decided that we didn't feel like being super competitive. That didn't work; we walked 22 miles and were up there with some of the longest distances traveled by foot. Two tactical mistakes - because the whole thing was phone-based, we didn't do well with managing our phone batteries. I only brought one charger for the two of us, and we did all our riddle answering with a lot of google help, which drained our batteries. So we lost a few hours charging phones during the day. But overall, pretty fun, and an interesting way to get a long day on my feet. 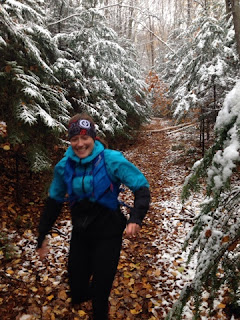 The next weekend I was hoping to do a Pemi loop, since Ari had me convinced that this was a good idea, but then it snowed enough to make things icy on the ridges, and that combined with 100mph winds up there kept us below treeline. We stayed on pretty flat trails in a valley, and it was still pretty windy, so I feel like we made the right choice. It was definitely a beautiful day for a long run. 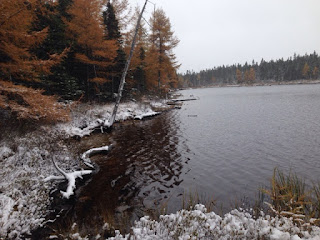 Shoal Pond in the snow. About as serene as it gets. 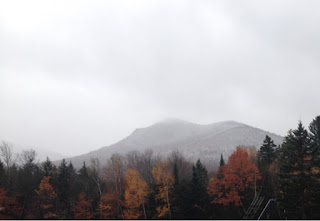 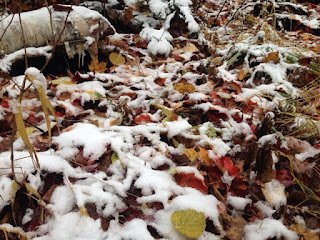 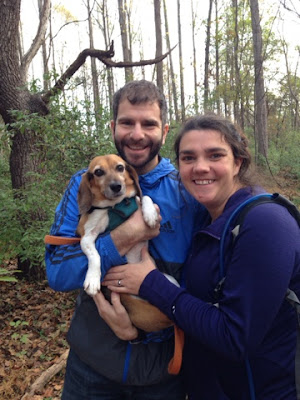 I had the opportunity to fly down to DC, where I got to hang out with Barney and his family, and help Boris and Alli with a junior training camp. Lots of fun in some really beautiful forests. Not the ideal taper weekend, but hey, board games count as rest, right? 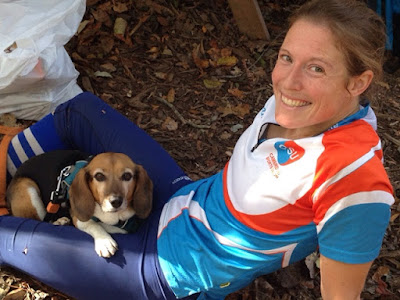 And getting a little quality time with a beagle is nothing to scoff at.

Two days from now I lace up my shoes and do something stupid. I'm kind of excited, kind of anxious, and hoping I can remember to find the joy while I run.