I guess I'm a couple races behind, but somehow, it's already ski season. This season is already looking better than last, with snow on the ground in at least five states around me, and more than enough man-made snow to hold the opener Eastern Cup races. Even Leo J has snow right now, meaning my skiers got to train before the races!

Some back-up, in the athletic world of Alex - the Blue Hills Traverse was held in the Holyoke Range this year, rather than at the Blue Hills, but it made for a very enjoyable event.
I won the women's race, but more through a lack of competitors than any great athletic prowess on my part. I was 10th among the men, but arguably could have been around 5th with some different tactics. Live and learn, and always pre-wet your shoes.

It was a brutally hilly course, but aside from some ankle instability I felt pretty strong.

Since the Traverse, which was just pre-Thanksgiving, I've been in a training block, albeit a low one. Fitting in workouts wherever they'll go, often in the dark. I've signed up for the Craftsbury marathon, so I'm trying to bring back my double poling strength, and that's a long road. 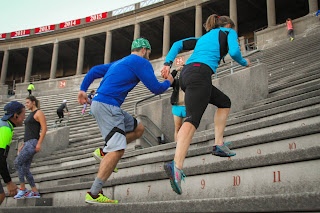 At least I can still bounce. Inov-8 from head to toe that morning, evidently. Some weeks, your vertical quality comes in the form of cement steps. 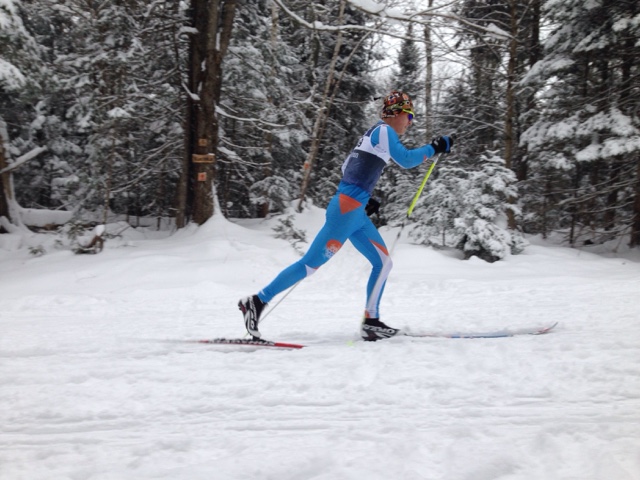 Textbook classic technique
Saturday 5k classic
Leading up to the Craftsbury opener Eastern Cups, I was feeling pretty good. I'd been crushing my first-years in interval workouts, actually doing some strength, and generally balancing life pretty well. Then all of a sudden I stopped being able to balance life and work, and work totally took over, and for some reason 13-hour days aren't conducive to either good-quality training or good-quality rest. I stood on the start line Saturday more tired than I've been in a long time.

I'm used to racing with some degree of fatigue; that's what racing as a coach is all about. But this was worse than I remembered, and combined with the falling snow making it very slow conditions, I was on a serious struggle bus. Individual-start 5k, and it's a good thing it was as short as it was, because I was having serious thoughts about taking a snow nap. My legs were flooded, my arms didn't work, and my core was more interested in a second breakfast than in applying power in my double pole. I think the less said about that race, the better. I'll have better races.

Sunday 10k pursuit
After a better night of sleep, and some bacon for breakfast (Craftsbury breakfasts are the BEST!), I had much better energy levels on Sunday. It was also a totally different feel to the course, fast and fluoro-y, great for a power skier who can generate speed. That would be me. It was a pursuit race, meaning the winner of Saturday's race went out first, and people went out after based on the number of seconds behind her they'd finished the day before. I had finished something like five minutes back on the first day, so I didn't start until midway through the pack, with about 20 people in the 15 seconds before and after me. Going to be a pack race! And on a 2.5km loop, no less. There was a lot of traffic out there. 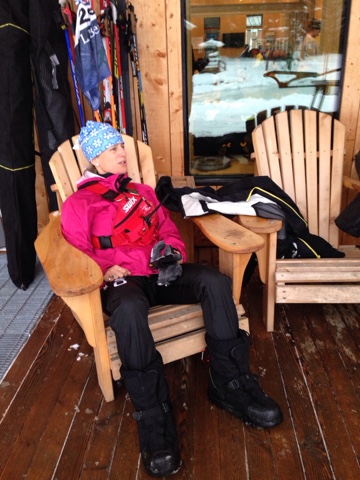 I started out four seconds behind two SLU gals, and I caught them while still in a tuck on the downhills. Our skis were RIPPING fast. We headed into the hills, and there were just bodies in every direction, so many people. I had thought that maybe I'd count the number of people I passed, but I lost track after the two SLU girls. Snuck past one of my ex-CSUers at Bates now, and then we hit the main hill, which had been marked with two lanes, to help with congestion. I was definitely stuck behind a pack of like 8 girls, all going much slower than I wanted to, but nothing to do in that case except be patient, because flailing to get past them was only going to lose me energy. As it flattened out I snuck around them, past one of my ex-skiers now at Colby, and got some clear track for a bit.

Closed the gap to an XC Ottawa girl as we climbed the wall in the stadium, and as we turned the corner and got hit in the face with a headwind carrying plenty of freezing rain, I was thankful to just ride her draft. The second lap might have been the most crowded, because there were some of the slower girls starting now. I followed Ottawa's draft across the fields, slalomed past some girls attempting to negotiate the corner from their butts in the snow, and glided past another pack as we headed back into the hills. This time I managed to make some strategic passes on the downhill, and was ahead of a large pack climbing the hill - took it relatively easy, since I could feel the fatigue building, but I was still moving pretty well.

Ottawa came back around and took the lead up the wall, which was totally fine by me, and I hopped back into her draft to start the third lap. Another very crowded lap, and the race leaders were coming by, so I tried not to be in their way. I was still rolling past other skiers, but they were better skiers now, which meant less traffic. I was starting to really hurt, but I think that's the idea. Back behind Ottawa for the wall and the draft, and then into the fourth lap, she started to snowplow on the first downhill corners, so I took the lead and she disappeared for good in my rearview.

I was seeing the back of one of my juniors on some of the hills, but I couldn't quite close that gap. Managed to stay on my feet to the finish, for a much better result than yesterday, 35th of about 130, and having passed about 50 skiers on the course. Yay for pursuits! That was fun. Now I'm looking forward to a good training camp in Quebec, and the next ski race! 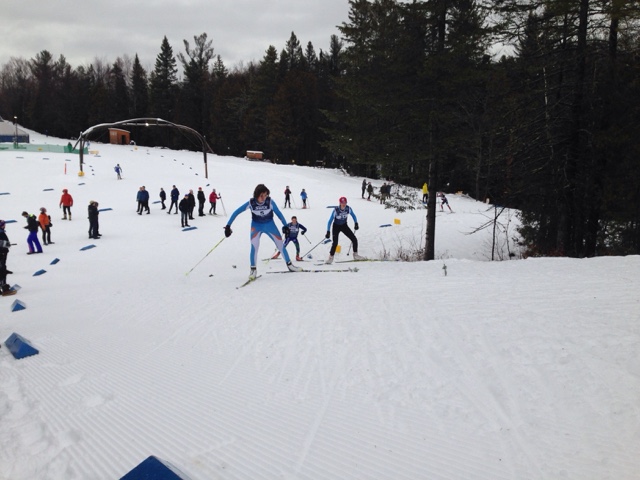 Textbook skate technique. Not me...
Posted by Alex at 3:52 PM