The second weekend of Eastern Cup racing was at Quarry Rd, in Waterville. My alma mater's home course! They only built the venue six years too late for me to ski there in college. Those are some really nice trails, and you can tell Tracey had a hand in the design, with serious climbs and technical downhills, and very little flat recovery. Not remotely close to what we train on during the week at the Leo J golf course. 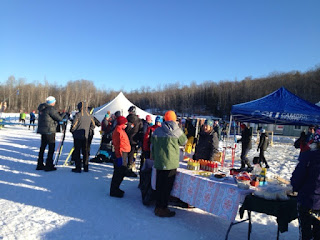 CSU Army back at it. We've got wax team and we've got the food table team, and really that's all we need.

Saturday was a skate sprint, and Sunday a mass start 10k classic. I decided to sign up for both races, figuring I'd sit out the classic race if things started to go haywire - priority is on making sure all the kids had their skis waxed, not on me getting another race start. I was very excited for the skate sprint, as that's one of my favorite formats, and I'm usually really good in them. I love doing races where I'm good at the format!

Well yeah, then the races happened. I'd been feeling pretty flat all week, and I didn't magically feel snappier on Saturday morning. I suspect the root of my problems lay in a warmup that wasn't hard enough, but I just felt terrible for the entire 3.5 minutes that I flailed through that course. I felt terrible on the uphills, I felt out of control on the downhills, and I couldn't generate any speed on the flats. All in all, a pretty miserable qualifier. I didn't even come close to advancing. And here I'd thought I'd be qualifying in the top 10. Hubris. 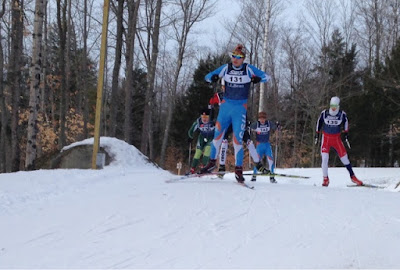 My U18 boys made it into the same heat. Really fun to watch them ski so well! 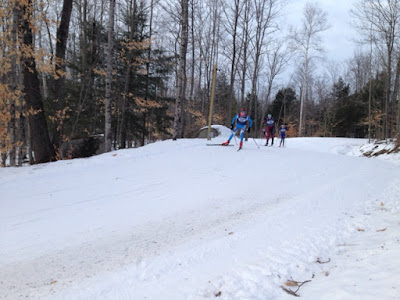 One of my first-year U16 girls leading the heat! Don't underestimate the small ones.

Sunday was a new day. The venue was still icy, but we had good skis, and it was warmer than Saturday. But I wasn't really feeling the whole racing thing. Maybe it was a black cloud left over from Saturday, but my legs felt like wooden pegs, with these long awkward slidey things on the bottom, totally disconnected from any useful function. Maddy and I skied a lot that morning, testing all the various klister combinations, searching for the perfect mixture of sticky and tenacious and fast, and Rob kept dreaming up new combos, that needed testing. And there's no point testing kick on flat bits, you need to hit the hills. After an hour and a half of skiing around, we jumped back into the trenches with the wax team, frantically applying cold klister to all the women's skis. Cold klister does not go on quickly or easily. At this point, I was fairly sure I shouldn't race. I was unmotivated, cold, and exhausted. And, if I started, I was bib 314 of 317 (yay for USSA not recognizing coaching licenses as a way to get seed points), which meant starting on the last row of a mass start. I figured I'd be a lot happier if I just watched the races today. I race because I like to beat people, and that wasn't looking very likely today. 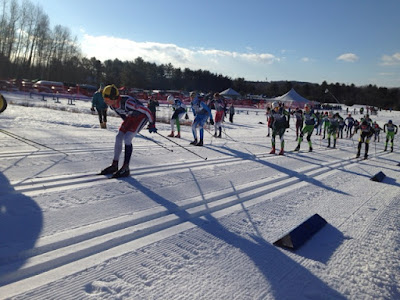 Beautiful rock-hard tracks, that actually held up through the end of the men's race! Two of my U16 boys had break-out races, which is always exciting when you're a coach.

And then the only pair of skis left to wax were mine. I had 12 minutes before the start.

You know what? Screw it. Step aside, ego, because the only way I'm going to get warm today, and get all this klister off my hands, is if I go out there and do a 10k tempo effort. I may not have the available oomph for a proper race, but mass starts are awesome, and I love skiing, even when it's slow. Let's go ski racing!

Five minutes to go, and I had two skis with wax on them, I was wearing a bib, and I was at the start, totally cold. The gun went off, and it was a good five seconds before I moved. Nothing like watching the leaders ski out of sight before you even take a stride! 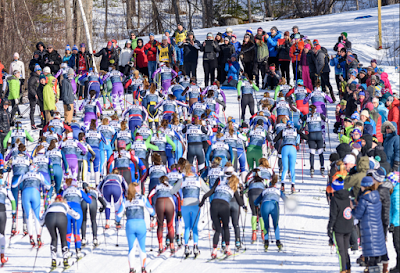 The back of the mass start. I'm the jerk poling between the tracks desperately trying to move up before we hit the u-turn. Photo from FlyingPointRoad.

Total traffic jam at the corner that comes 200m after the start, and then a couple girls on their butts at the next corner as we entered the woods. I negotiated all of that pretty well, and kept moving forwards as we rolled down to the bottom of the course. I was using this part of the course as a warmup as much as a chance to pass people at no added effort, and by the time we hit the first gradual hill, I was striding around bibs in the 270-280s. 40 people down, that's some improvement. I even recognized some of them! But the front of the race had already crested this hill. Well, no point dwelling on what I can't control, just ski up this hill smoothly.

In some ways, it's a lot easier starting in the back - going up the hill, everyone was in a line, so there really wasn't much room to pass. I was ok with this effort, as it wasn't too hard, but I knew I should keep moving up. I managed to not take out any skiers on the winding downhill, getting past a good number of snowplowers, and then we started up the major climb of the course. I could move pretty well while striding, but as soon as people were herringboning, the trail was blocked. Again, I didn't make much effort to get past, reasoning I'd waste too much energy to no avail, so I just sort of herringbone-walked in line with everyone else.

Then we hit the gradual bit at the top, and I jumped up a few more groups, angling to make some space for myself on the technical downhills. The first two corners were totally step-able, since you don't have much speed at that point. The third corner is a little harder, off-camber and more than doubling back on itself, so I had found that morning that skidding a little speed off at the beginning and stepping through the end yielded the most speed. It shot you into a short uphill, so carrying speed was definitely beneficial. It was amazing how many girls I passed on those three corners. Like they were standing still. Free speed, ladies!

After the short uphill the course shot us back onto the sprint course, three more downhill corners, again the first two were easy and the third you carried more speed, and then the uphill from the sprint before a long double poling bit through the stadium. I stayed in my tuck for a long time into the stadium, catching my breath and still passing people who had stood up to double pole. This was fun! I love passing people just because I'm more efficient!

I rode this feeling of being awesome all the way to the bottom of the course starting my second lap, and then I started uphill and all that fatigue I'd felt in the morning came crashing through my little bubble of happiness. Oh right. Ski racing is hard. Sort of simultaneous to that realization, my pole strap broke. I guess it must have been pretty worn, and my beastly double poling around the stadium was just too much. The pole was still usable, but it had suddenly gotten a lot less efficient. I was at the front of a loose pack, now, with a bit of a gap which meant I could finally ski my own pace, but I knew that the last 3km would be bad without a working pole strap.

Starting the long climb, I saw a junior spectating the race, carrying poles, and I swapped with him. Unfortunately, that pole was 5 inches too long. I figured it was better than nothing, and was worth the 15 seconds or so that I'd lost making the swap. But double poling was difficult and awkward now, even worse than with my broken strap. Luckily near the top of the climb I saw Tracey, my coach from Colby, and she gave me her pole, much closer to the proper height. I lost another 15 seconds or so with the second swap, but now I had two poles that both worked! Unfortunately, all that swapping of poles put me behind that little pack I'd been at the front of at the bottom of the hill. Bad positioning. Naturally, I tried to make up for some of that time on the downhill, and took that third corner a little too aggressively, passing someone on the inside in the ice. As I stepped out from the ice, my klister caught the berm of sugar snow, and I went tumbling. Luckily I'm a pro at falling down, and I rolled out of it and was up without losing much time, but that killed my momentum into the short little kicker midway down the hill.

I think I did my first real work of the course on the final climb before the stadium, but I was still at the back of the pack. I made a few more passes before the end, but it was far too little far too late, and before I knew it I was across the line and done with the race. Dang, I was just getting started!

I'm really glad I ended up racing. Even if the effort wasn't what I would have liked, I had a blast playing NASCAR in the mass start, and it is a lot of fun to ski on skis that kick well and are still faster than everyone around you. The result was so bad I won't even link to it, but that wasn't the point of today. 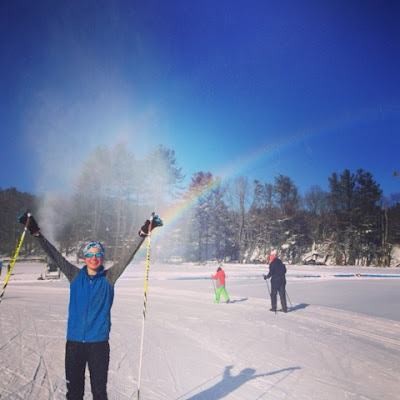 Some days, you stand at the end of a double rainbow (snow-bow) and yell "I'M A LEPRECHAUN!" Glad I can teach my skiers to treat those moments with the same joy I do.


Part of me wonders about my recent attitude about ski races. I've been very lackadaisical lately, and not that interested in pushing through any sort of struggle. This is new, mildly disturbing, and makes me wonder if I've used up my lifetime of give-a-damns about race starts. I guess time will tell, considering the next two weekends are two races I should care about. It could be as simple as shifted priorities when at the Eastern Cups, focused on my skiers above all else. One thing is damn sure - I need this skiing stuff in my life to keep my head balanced and happy, regardless of what speed I'm going.

White Mountain Classic this weekend at Jackson, and then the Craftsbury Marathon next weekend. I'm excited to look for a little effort in these races. Here goes!
Posted by Alex at 10:23 AM

This looks amazing! Do you know if there are ice skating events out there? I've been looking for some new places to do so and getting inspired by some skating slogans as well I can share with you: Ice Skating Slogans