I registered for both races for the final weekend of EC racing. No good reason for it, especially considering it was two 5ks, which are pretty darn short. I guess I wanted to feel some hurt, and so that became my goal for the weekend - really dig in, and see how hard I could push. After some longer races where it's all a ski-pretty-and-wait game, this would be interesting.

Saturday was moved from Hanover to Craftsbury, which made for a longer drive on Friday. I got up in time for dinner, and had a nice evening at the Village Inn with some of CSUers. No time for a ski, but I tried to make up for that with a heavy foam rolling session, ready for a long day on my feet punctuated with a 15-20 minute burst of adrenaline-filled self-induced wheezing.

Silver Fox Trot
After a morning of ski testing and course tours, it was time for my start, near the back of the field thanks to my continued non-updated USSA points. It was nice to use the full 5k loop, which skis really nicely. I love that course, with real stride-able hills, and some good elevation change. My goal, as stated above, was to really suffer, but also to remember to really ski, rather than just start shuffling or running. The course starts out with some flat stuff, then the sneaky little sprint hill climb, which starts out kind of steep, then levels off. Managed to keep striding, no running, focused on the weight transfer. I could see my 15s girl, a local C'bury kid, and I passed my 30s and 45s girls up that first hill. Starting in the back is good for my ego, if not my results.

Down the windy sleeper hill I actually caught my 15s girl, but she pulled even and got ahead up the steep part of the A climb. I got her back as it evened out, and then whipped past three more girls on the downhill - really good skis today. One more scalp at the bottom of the hill, pretty recovered at that point, then the second A climb. The tracks were wiped out near the top, so I did some herringboning, but really shouldn't have. Pretty wheezy by the top of the wall, but I got past two more skiers, and discovered that my double pole has actually returned to levels I haven't seen since 2012 or so. Around the tight little corner and then into the tracks with my head down, recovering as much as I could before the final B climb.

All my fans were on that hill, so I may have gone a little too hard, as I got to the top and had pretty much emptied the tank completely at that point. Stayed in a tuck too long down the other side into the rollers, and nearly came to a stop, but standing up was a questionable activity at that point, not to mention skiing. Final downhills to the little marsh and then back up past the cabins, managing to kick and glide even though all I wanted to do was shuffle. Or maybe lie down and take a snow nap.

Pretty good race-feeling, and I don't think I've pushed that hard yet this season. Feels good to suffer like that, especially while knowing you're doing it with good technique. My result was kind of crap, but, I can't complain too much, and I was happy with the race. Probably the best skis I've been on in 2-3 yrs - those Madshus Redlines are magic on hardwax. 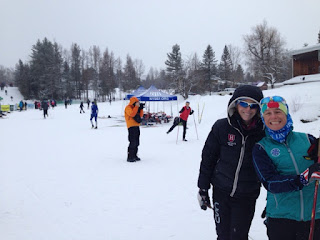 Cheri Walsh Memorial
Sunday I could feel the fatigue of the hard effort and the coaching, with heavy quads. It had snowed a decent amount on both Friday and Saturday, so the course was soft and slow. Not my favorite conditions, but I had a good pair of skis for it. I limited myself to a single course-tour with the U16 boys that morning, and it was good to analyze all the turns and transitions. The Holderness trails are fantastic, filled with transitions, and in soft snow the narrow trail feels even tighter. Very reminiscent of Mendon Ponds, where I grew up learning to ski. 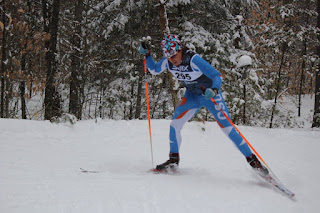 Suffering. I could use more right ankle flexibility, in my life, but particularly when skating up steep hills please.

I got in a decent warmup, maybe a little on the short side, but I'd seen some foam rollers inside and my quads were tight and heavy, so I went to take care of those first and that ate some time. Starting near the back, as is the new normal, would have been a problem at 15s intervals, but it was 30s intervals and I had a ghost in front of me, so a pretty clear course. My skis were good, but not amazing - I think it was all slow out there. Not my conditions, on an icy day I would have rocked that course a lot harder. But, this is still a good course for me, despite nearly 2k of winding climbs, some of them really steep. My main goal for the day was to beat my fellow coach Kathy, starting 1.5min ahead.

I tried to stay light and quick on the climbs, but was still wheezing at the 1k mark. Passed my 1-min girl, got a brief breather on the downhill, then into the second climb, where I did try to push some V2. Caught my 2min girl on that hill. Both of these were my skiers, so I tried not to be too aggressive. Then it was into the rollers, and it's so hard to generate speed on the winding flat stuff when you're already red-lined. All the hills on the course are short and sharp, requiring some hop skating and more strength than I have to give, but I was finessing my way through it. No snoozing on that course.

I got a split from Doro around 3.5k that I was 8s down on Kathy. The final 1.5k are mostly downhill with some transitions, and Kathy is one of the few people who'll ski a downhill better than me, so I knew it would be hard to pick up 8 seconds on her. That didn't stop me from trying! I was still wheezing the whole way down the hill, working each corner and crest and dip for everything it was worth, pushing through the wobbly legs and exhausted shoulders. It wasn't pretty, but I was hauling. Thank god for that final downhill into the stadium, to catch my breath before a sneaky 500m around some soccer fields that just didn't want to end. I concentrated on continuing to try and eke out the seconds and had a decent kick, but unfortunately Kathy made it around that course 1 second faster than me. D'oh!

That was good enough for 15th, my first NENSA point of the season (and first one in a couple seasons, I would imagine), and Kathy and I were the top CSU ladies on the day. A rare occurrence, and one that means my kids better start skiing faster. It felt so awesome to really redline it this weekend. Purposeful suffering can be so cleansing. 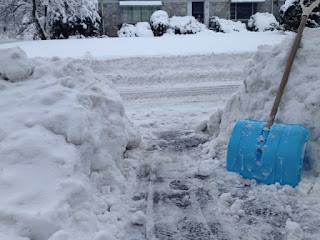 Came home and got to do a different kind of workout! 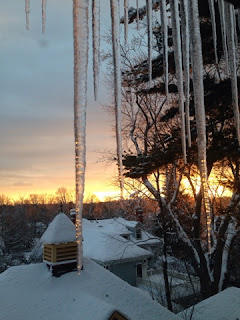