I haven't back to the Craftsbury marathon since 2010, and I had actually had fun then, so figured I'd better just quit while I was ahead. No idea why I decided to do it again this year, maybe seven years was enough to learn how to wax my skis and succeed in long races, but my main goal was to enjoy the day. 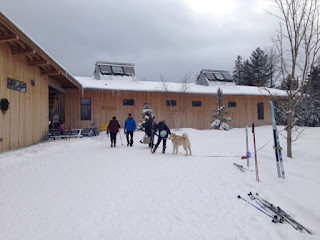 They start all the distances together, but luckily the bibs are color-coded so you know who is doing what. The fast Canadian master who comes to the EC races and crushes us all took off with Kaitlynn Miller, but they were doing two and one lap, respectively, so I had no need to speed up, and settled in to a comfortable but snappy pace. Out into Murphy's field the first time and Emily Stitt, Middlebury grad and last year's top American at the Norwegian Birkie in 59th, took the lead with Amy Caldwell. Amy was only doing two laps, but I liked her rhythm, so rolled along with them. I noted that both were kicking much better than me, but my skis were faster. Even that early, if your competitors have the kick that you don't, the writing is on the wall. Should have gone with that extra layer of the multigrade. 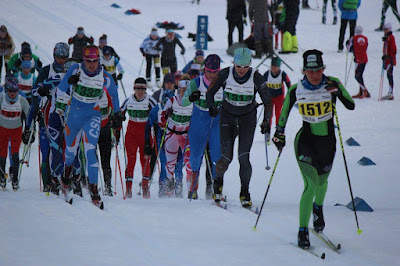 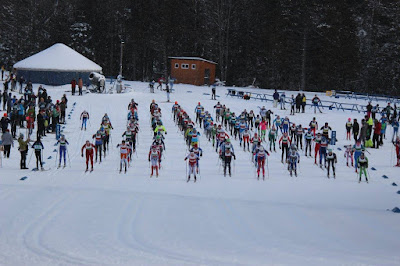 We were well into the back of the men's wave by the feed at 2k, and it became a game of human slalom. Kind of fun, kind of frustrating. All the fresh snow meant that skiing out of the tracks was painfully slow, and skiing in the tracks was glazing and fast. But, most of the guys we were passing had no idea that there were faster people coming through, and so to pass someone you had to hop out of the track, do a little sprint, and then hop back in. I was not a fan of burning matches like this. But, no real other way to do it. Maybe next year we can have an elite wave?

The human slalom got even more entertaining coming down the s-turns in the fields by Eleanor's, but then we got a nice long stretch of double poling with three tracks. The middle track was definitely fastest, but at least you could use the other tracks to pass the guys without wasting too much energy. Emily, Amy and I were still skiing together, and I was just loving the scenery - winter wonderland! I mentioned that out loud, just to be able to remember how beautiful I was finding it on later laps when I might not be as inclined to look around. Entering Ruthie's Run, around 6k, Amy called out "you girls know you have another 44 kilometers to ski, right?" I could only laugh - skiing fast is so much more fun than skiing slow, that I'd rather start fast and flare out than trudge along monitoring my heart rate.

My lack of kick became apparent climbing Ruthie's Run. It's not a big hill, but it does go on for 2km, and I didn't want to use my arms to force it, because I needed those muscles for later. I finessed my way along in time with Amy, but just as it got steep I got stuck behind more guys, and the trail had narrowed to cross a bridge and I was boxed out. Emily and Amy put a small gap on me, and once I got around and found my own rhythm again I didn't feel like accelerating to catch up. Now it was going to get lonely.

But, my slick skis made up the difference on the downhill, and I made contact again. It was still really heavy traffic, looking at the finish times of the 2- and 4-lap men, I may have already passed ~120 guys by that point. We started climbing back to the stadium and I had to do a lot of switching tracks, any time I wanted to get around someone. Emily pulled ahead, and Amy dangled behind her. I was finding that out of the tracks, my skis were icing, because there was just too much fresh snow out there, but I really couldn't kick too well in the tracks. Tried not to stress about it, because the name of the game is energy conservation, but I was frustrated.

The second lap was a little calmer in terms of passing the guys. The ones I was catching were moving a little faster, skiing a little better, and I could see Amy dangling ahead of me on the hills. I focused on my hips coming up Ruthie's, and it worked well enough, not a very powerful stride but at least I got up the hill. I was pretty close to Amy after the flat bits at the bottom of the descent, but she pulled ahead again on the climb to the stadium, and I came through the lap maybe 30 seconds after she finished. Emily long gone, so now it would be a lonely race of hoping nobody would come from behind. The only guys I would be passing now were 50k skiers, with the occasional lapped skier.

Murphy's field allows a look behind, as it's 1-2 minutes to go around the field, and I could see Jane McClelland not that far behind me. I also could see Robert Faltus and Jamie Doucett, masters from CSU, about 2 minutes ahead of me, and made it my goal to hunt them down. It had stopped snowing, and my skis were kicking a lot better now. This also meant it was less slow to ski out of the track, which is what I would do on the steeper uphills to get some stick to my shuffle. I still had really good energy, so let myself flare off some fitness cresting the hills. I was seeing Jamie's back on the Race Loop climb, but he double poles like a canoe racer, so I didn't actually make contact until Ruthie's Run. The outside tracks, which were less glazed, gave me slightly better kick, and I allowed myself to use some arm wax to make sure I stayed in the track. Being able to ski in the same track for longer than 20 seconds was a new thing this lap, now that most of the slow guys had finished, and it was nice to finally settle in to a rhythm.

Coming down from Ruthie's, I was chasing a guy in Craftsbury Green, Peter Harris. I couldn't get by him on the climbs, as he had really good skis, but we both reeled in Robert together. I finally got ahead of Peter and Robert as we started the fourth lap, and I was looking for a new rabbit. Into Murphy's field and I could see Bob Burnham just entering the woods, so target acquired. I took a look back as I finished the loop, and Jane was still there, maybe 20 seconds further back than the last lap. But I was still feeling good, really strong and plenty fit, so started trying to push the pace again. My arms were getting tired, but they weren't cramping.

I was finding my skis were wanting to ice here and there, so I had to be careful if getting out of the tracks. As I came through the Ruthie's feed station, I first saw Sara Mae having a chat with the volunteers, and then caught sight of Bob heading up the next little climb. Still out of reach, but getting closer. Through the flat bits after the descent I started some positive self-talk, that definitely included a line about how I'm such a beast I'm going to catch Bob. It worked, and I caught him and another two guys on the climbs back to the stadium. Again forcing myself to stay in the track, because it was just so much faster, just took a little more arm strength to make the kick happen.

I couldn't drop Bob until the final hill to the cabins, but at least he wasn't telling stories. I was happy to be done, no cramping, no bonking, and good energy throughout, but I really would have liked slightly stickier skis. Probably just more layers of the Rode, maybe on a stiffer pair of skis. But overall, this was fantastic. I enjoyed myself and really enjoyed skiing in those beautiful woods, and I ended up in 2nd place, ahead of names like Meghan Killigrew and Jane McLelland and Elissa Bradley, so I'll take it! Emily got me by 10 minutes, which is kind of embarrassing, but hey, if I could have gone faster I would have, so no real shame there. 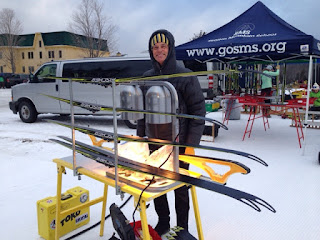 Ed and I headed down to Middlebury for the Eastern Cup after the race. I had abandoned my team on a classic sprint day, but they were totally fine, mostly because Rob had acquired some food-grade french fry warmers to keep the klister warm. If you're going to do something that stupidly awesome, you better own it. Rikert is so beautiful in the morning when you get there for a ski race, and the far ridge of mountains was covered with a dusting of fresh snow. The course was in great shape, making me wish I'd signed up for the race, but by my second lap around testing skis, I was happy enough to remain a spectator! 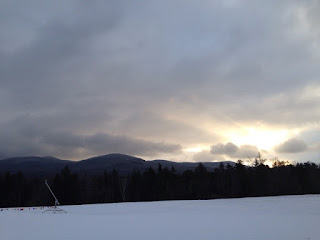 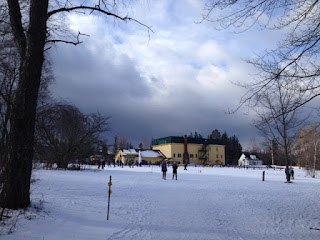 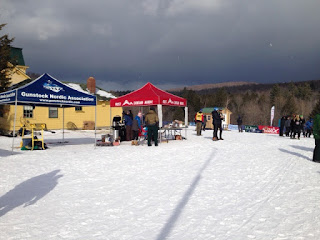 With clouds like this, you hold off on rilling all the skis for transformed manmade snow until just before the races start.