May had promised to be this great month of racing. When I lined up the competitions in February, training was on track, and I was super psyched to get to the point of the season where the work is done and you're just reaping the rewards of being really, really, really fit.

If you've been reading this blog, you'll know that didn't go according to plan. What do you mean, I'm only human? So anyway, what with 7 Sisters, the Billygoat, the Sugarloaf marathon, and the Westchester County Challenge/Team Trials races already paid for and lodging/transport arranged, all that was left was for me to travel around to races and cheer on my friends. It could have been a lot worse; sitting at home moping. And there's still be time for a bit of a social life, such as it is for us. 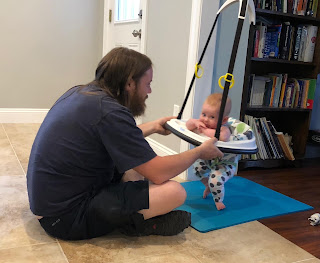 Ed playing with Andrea over at Jess and Graham's house - "I don't understand why she's crying, she seemed fine when she was flying through the air!"

Sugarloaf marathon
The Billygoat was worth doing, despite the setback in my injury, and actually might have been good, because it made it very clear to me that I should NOT start the marathon the next weekend. That had been my A goal for the season, so it actually wasn't as hard as I imagined to not start the race - knowing you're completely unprepared helps instill common sense, sometimes. It was a lot of fun to cheer for my friend Sharon, as she set a 46-minute PR. So impressive! That looked like a fun course, so maybe someday I'll be back for it. 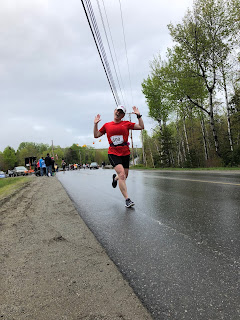 Still so full of energy 11 miles in 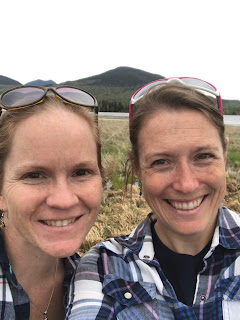 Reccing the course the day before, with a couple tourist stops. Here in front of the Bigelow Range. 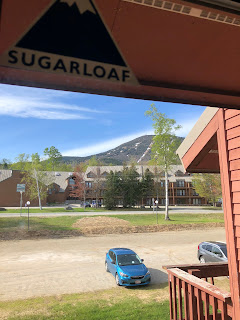 View from our condo. Hi car! 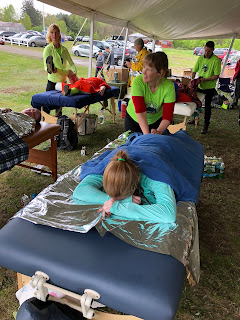 This part looked more painful than the running part. 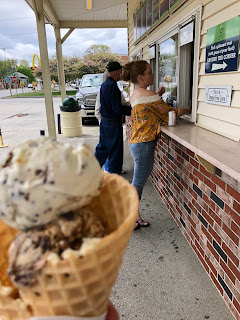 First stop: Gifford's, this one in Farmington. Then we stopped again in Portland; I wanted to eat at a place called "Duckfat", but unfortunately it was too long a wait, so we ate fries somewhere else. Nice to break up the drive home from a marathon with walking and eating. 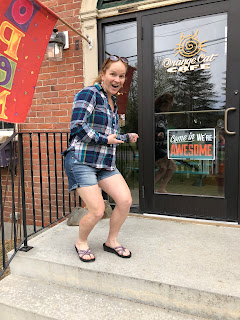 Westchester County Challenge
The final weekend of May was Team Trials. I avoided this race last year, because I wanted to make it really clear, to both myself and my ex-teammates and officials, that I was done. Retired. Not coming back. This year, I felt like it would be safe to do the races, since I was so out of shape and out of orienteering practice that it would be very clear that I wasn't "racing." This was the first really hot weekend of the season, and I suffered mightily. The combination of being really out of shape, unused to spending time on feet, and 90+ degrees was not a good one, but I did see a new max heart rate, highest since college!

The first race was the middle distance, and I had a blast navigating through the technical but fast terrain at Westmoreland Sanctuary. Unfortunately, as the heat and my lack of fitness caught up, I started making mistakes near the end of the course, and dropped about four minutes total. Still, I was proud of my navigation, all things considered, and had so much fun. This is how orienteering should be! But boy oh boy did I miss my fitness.

Sunday was the Continental Relay Championships, and Team Giggles was back in action! Izzy Bryant joined Ali and myself, complete with Wonder Woman socks and pink tiaras. We were taking ourselves very seriously. This was at Mountain Lakes State Park, and again the orienteering was very fast. I didn't have much speed in my legs, but my knee held up great. Maybe orienteering is actually good for it? It was so much fun to be running in a relay again!

Monday (Memorial Day) was the long distance race, and I decided not to push my luck. I took Barney for a 5-mi walk, which thoroughly tired him out with his little legs, and took the sting out of my legs enough that I was happy enough to have not started. It was also fun to stay in the "team" house that my friend Greg had organized. Ed and I figured that we can't contribute that much to the senior team, but at the very least we could show up and cook for them, so we did. Nice to feel useful! 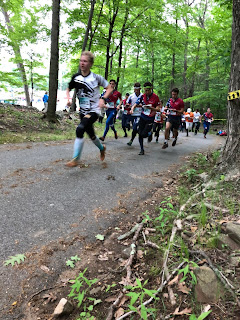 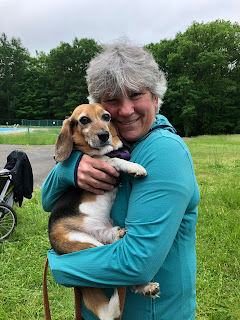 Valerie and Barney, two very good reasons to go to this event 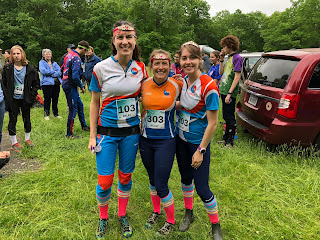 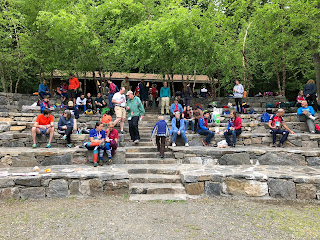 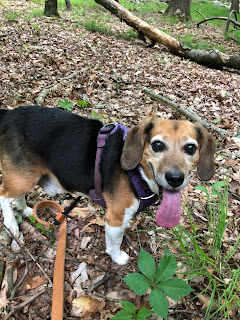 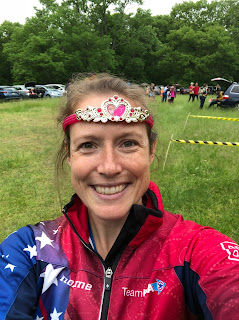 Modeling my tiara. It stayed in place for the whole relay! 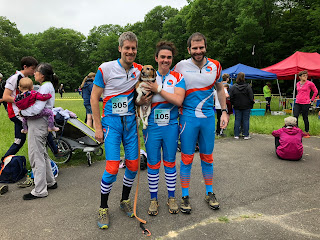 The QOC/CSU team! Kenny, Alli, and Boris. Barney is just a mascot. 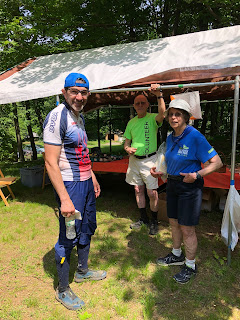 The movers and shakers of this sport - Balter, Larry, and Sara Mae. Love this adopted family. 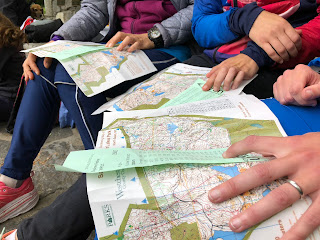 Geeking over maps and splits 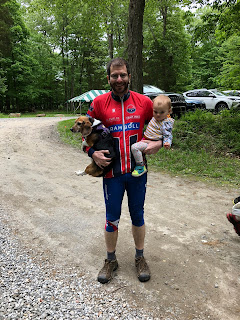 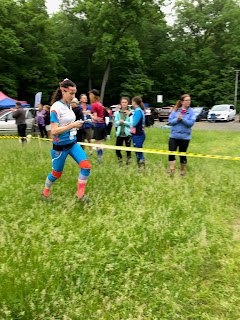 Great to see Ali running in the team trials again. She won the overall handily, but is still working on regaining that strength and fitness you lose after creating a mini human. She'll be rocking by WOC! 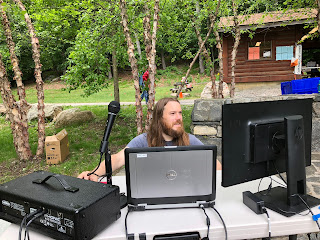 Ed setting up the announcer's booth. 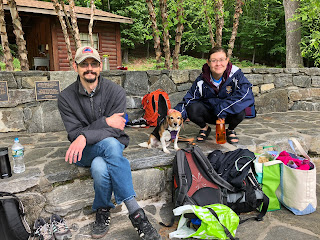 Cheering squad of Tom and Jennifer! And of course Barney. How does he get into all of my photos? 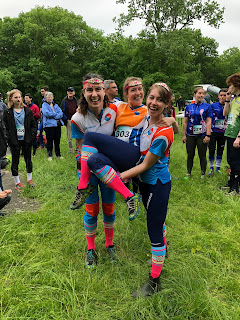 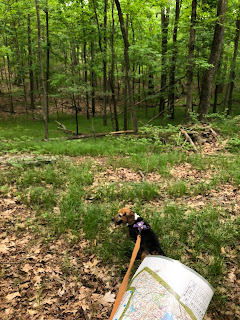 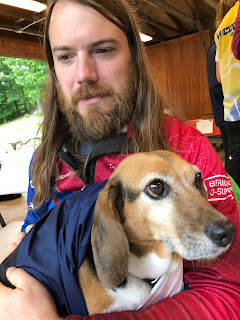