I got the idea in my head a few years back that I wanted to run the Boston Marathon. I mean, I'm a runner, I live in Boston, it only makes sense that I should do this race. But you've gotta qualify for the thing, and that means running a fast-enough road marathon before you can even sign up. And of course, I wanted to run reasonably fast, so that when people ask the inevitable "oh, you're a runner? have you run a marathon?" you can be like "yeah, and a fast one too."

I'm known for my humility.

After watching the 2017 race, there were so many people in it that I knew and they were all inspiring and I was all like "omg I wanna run this race!" But, it takes a while to get ready for a marathon, you have to do lots of long runs and do them on pavement and pay attention to pace, and all this stuff that is actually kind of new to me, because I run for time rather than distance, seeking hills and forest and rocks and things, and while I do regular track workouts, I have no idea how fast to run when it's just on a boring old road. So, I downloaded a training plan from the internet, tweaked it to fit all my other various athletic obligations, and signed up for the Quebec City marathon, pretty much the latest race I could run and still sign up for Boston to run the 2018 race. Enter the Great Smashed Kneecap of Summer 2017, an ill-advised 24-hour couch-to-marathon plan after 9 weeks off, and definitely no BQ.

That's ok, we all have setbacks. My kneecap recovered just fine, and I signed up for a spring race, convincing my friend Sharon to join me at Sugarloaf. Enter the 2018 World Cup course setting and subsequent knee injury (of the other knee) brought on through too much skiing, too little sleep, and far too much stress. That one took two months of patiently waiting for my body to fix itself, again without really being able to bend my knee during the recovery time. A little gun shy that mere stress could trigger actual physical ailments, I was careful returning to training, and hesitant to drop yet another $100 on a race entry if I didn't think I could race it. Thanks to time and the tireless work by the folks at Beantown Physio, I finally declared myself healed and ready to rock this July, and started to put in some miles again.

But I still didn't sign up for a race. When you're coming back from zero, it takes a long time to get to the point where you're putting in adequate mileage to start to contemplate long races, and I wasn't willing to let myself latch onto a race, yet. Mentally and emotionally, I couldn't handle it if something happened and I wouldn't be able to run. And yet the miles ticked by, one at a time, until I was finally reaching that strange point in marathon training where 10 miles no longer feels like a big deal. And, with a little prodding from Sharon, I signed up for a race on October 28th - the Loco Marathon. 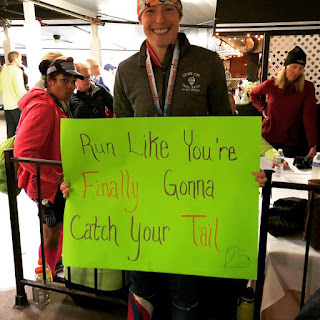 Sharon was running the half marathon, while I got to do a second lap, but we could start together. I really had no idea how fast I'd be running - you're supposed to know these things, but I didn't have much to go on in terms of half marathons or 10ks. I figured I'd do what I do best, run by feel, and listen to my body. I have something like 700 race starts over the last decade to draw experience from, so even though the race course surface may be different, I'm still piloting the same beat up body. 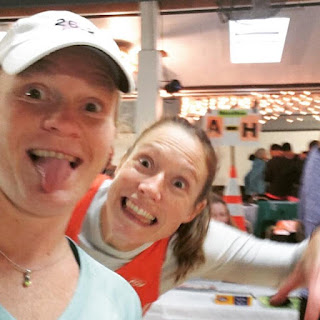 Pre-race vibe
The first ten miles were a total breeze. The weather was cool and misty, I had dressed perfectly for it, I had a happy song in my head, and there were plenty of people around me. I started out behind the 7:35 pace group, knowing that I just had to tick off every 5-mi lap in 40 minutes or less to hit my Boston Qualification (BQ) time. I figured that I should slowly let the 7:35 guy get out of sight, but I'd rather fall into a pace early and hang on to it as things got rough, than try to summon the extreme mental oomph required to negative split anything. Never been my forte, negative splitting. So, I cruised through those first five miles quite happily, chatting a little first with Sharon and then with another two ladies that I was near. The course was gorgeous, rural and pretty flat, through farms and fields on quiet roads. I think most of the traffic was from spectators who were trying to get to good cheering locations. 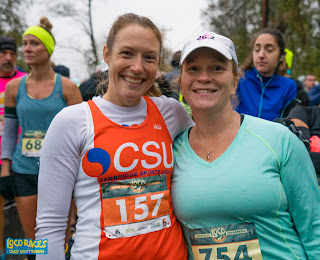 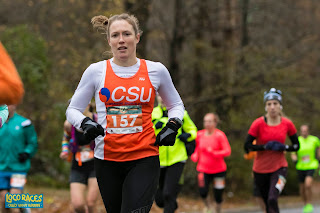 The second five miles were equally fun. I was relaxing up the hills, rolling down them, remembering to eat my special running gummies (gotta love a sport where you're not only allowed, but SUPPOSED TO eat gummy bears as you do it!), and smiling about how much fun it is to run. Each of the first two five-mile laps I'd earned about 2 minutes of cushion against my BQ, which I was sure I'd dig into later. The last three miles of each Loco loop were on a dirt rail trail, and I was expecting something a little more finished, maybe cinder. It was a bit of a surprise to thus find myself splashing through mud puddles on an uneven trail - hey, this is the good stuff! I wasn't expecting to actually have fun!

The course got much quieter after lapping through the half - seemed most people were just doing one lap. I started to pick off runners, seemed like a lot of people were starting to fade on lap 2. At the 15mi mark, I reminded myself that at Pisgah, I was only halfway done. This seemed to help with the almost-there syndrome that you otherwise get in long races. Stay focused, you've got a lot of running left to do. 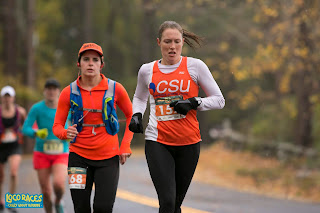 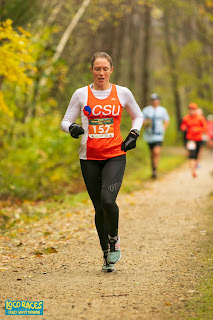 We call this the staring-at-your-feet-face

The next five miles got tough. Some of it was being on a second loop of what you've already done, and some of it was just the accumulated repetitive motion starting to wear on me. I may be able to do 50ks and Pemi loops and whatever else, but those have so many different motions for your legs - this marathon business was the same damn thing, over and over and over. By my calculations, that's 18,180 strides that I took on Sunday, each one almost identical to the last. And, I was doing them considerably faster than all those training strides (maybe 720,000 strides, give or take a few thousand), because I didn't really know how fast I was supposed to be going in training. This wasn't nearly as easy as the first time through this loop.

Running was taking much more concentration, now, and I was more focused now, a little less smiley. My quads were doing their best to shit the bed, sharp pain with each step, and there's nothing to do about that except put it out of your mind and keep ticking off miles. I was very slowly reeling in a guy ahead of me when two guys that I'd dropped on the rail trail caught back up to me. This was excellent timing, because I was entering a pretty low point, wondering if I'd still hit a BQ if I walked the rest of the course. I got into their draft, back up to speed at 7:35 miles, and it was a lot of work, but I could keep my legs going through strength of will. Our little group of four continued to pick off miles, not much chatter now, and we finally got to the little hill before the rail trail and I knew I'd make it. I can force myself through three miles of anything! 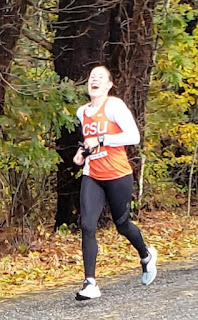 Laughing at Sharon's sign. Chuck Norris never ran a marathon. It was really funny at the time.

Sharon was at the top of the hill with some funny signs, and that totally bolstered my spirits. I was looking forward to the mud, too, if only because I wanted to use different muscles, and as I churned my way up the rail trail I caught a glimpse of a woman way ahead of me. Target: acquired. I started pace counting, just to stay focused and take my mind off my quads and keep moving, and though it felt like it took forever, I eventually caught up to her. Two miles left. You can count to 1440, just keep counting paces. The last 5-mi lap dinged, and I was still banking time against the BQ. Go me! One more mile. Half a mile. Two tenths. Started to see more spectators. Into the final muddy field. Oh man I can see the finish! Crossed that line, and I have never been so happy to stop running. 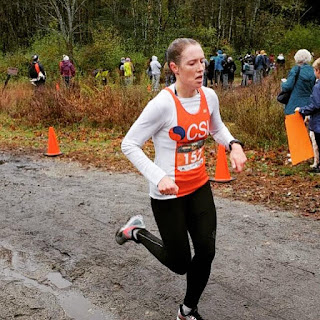 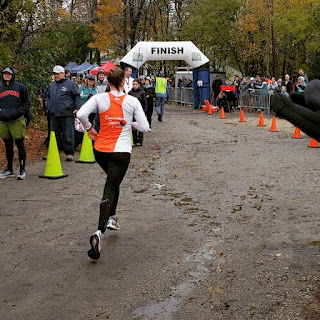 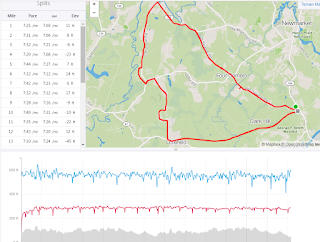 HR and pace both slowly dropping as my legs crashed

Overall, I'm quite pleased with how the race went. I hit my goal, and even though I was exploring the pain cave for much of the last eight miles, I was able to push through without losing too much time. For having no idea how fast I ought to have been training, I discovered that the answer was "much faster than I did." It would have been nice to maintain my 1:39 half split, but I think without the faster road training, it just wasn't going to happen. A part of me wants to tackle this challenge again, because I'm fairly sure sub-3:20 is within reach, maybe even sub-3:15. But a much larger part of me is very happy to just sign up for and run the 2020 Boston Marathon and call it good (we all know a fast Boston Marathon is out of the question because of ski season).

The best part? Both knee injuries are just history. For the meantime, I have put that injury-demon to rest.

I am Mariam,from what I can read. It has been sad news and scam to everyone about Voodoo casters or so. But to me they are so real because one worked for me not quite long ago.i met this man on a blog his name is Dr Abalaka is a very powerful man.I traveled down to where his shrine his and we both did the ritual and sacrifice.he had no website yet but he promised to create one as costumers are requesting for it, and now i'm free from the powders of sickness.I don't know about you but Voodoo is real;love marriage,finance, job promotion ,lottery Voodoo,poker voodoo,golf Voodoo,Law & Court case Spells,money voodoo,weigh loss voodoo,diabetic voodoo,hypertensive,depression healing voodoo etc,high cholesterol voodoo,Trouble in marriage,Barrenness(need a child),Luck, Money Spells,he also cure any cancer and HIV,it's all he does. I used my money to purchase everything he used he never collected a dime from. He told me I can repay him anytime with anything from my heart. Now I don't know how to do that. If you can help or you need his help write him on (dr.abalaka@outlook.com) and also his cell number: 760-935-3804 you can text him because he use to be very busy some times,i believe that your story will change for better,or if you have any question you can contact me here as mariambaurice@gmail.com best of luck.

Aw, this was a really nice post. In thought I want to put in writing like this moreover – taking time and actual effort to make a very good article… however what can I say… I procrastinate alot and in no way appear to get something done. online casinos for us players