This hike has been on my bucket list for a while, so when Ari mentioned that he wanted to run the Pemi loop this fall, I thought it might fit perfectly in with my marathon training. Kind of. At least if you look at it all squinty or something. I mean, hiking over 10,000ft of climb is totally good prep for rolling out 8-minute miles endlessly, right? Well, at the very least, this promised to fill my soul with mountain views and rocks and leaves and things, and I was all in.

Unfortunately my body didn't totally agree with this all-in attitude. My right foot hadn't quite recovered from Pisgah, and throwing another 50k at it, this time with hills, was not kind. But I started the day hoping for the best, because that's what I do.

We went debated the merits of clockwise vs counterclockwise in the car, and ultimately settled on clockwise, mostly because that was how Ari has always done it in the past, and it means you reach Galehead Hut after having already done the bulk of the climbing and rough trail. Gabriel and I were up for whatever, having never done this loop before and happy to rely on someone else's expertise.

We jogged off toward the Osseo trail with high spirits. Up the trail to Flume Ari and Gabriel quickly dropped me, and I discovered that my legs were definitely feeling the heavy training load from last week. I made the conscious decision to back off a little, because life is a lot more fun when you're not suffering, and gosh was it a beautiful day for putting one foot in front of the other! The boys didn't have to wait for *too* long at the top, and the ridge between Flume and Liberty was great. We jogged along happily, but once we hit Little Haystack, we started running into the crowds on the Franconia Ridge. I don't blame them, because that is the most amazing accessible trail that I can think of, but we passed maybe 100-150 people between Little Haystack and Lafayette, in both directions. The whole ridge was in a cloud, which took away any sense of distance, but it was nice to not get totally fried by the sun. 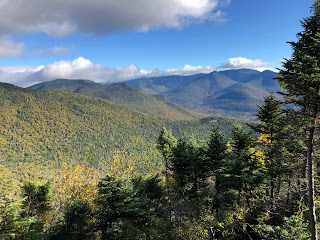 Looking east from Flume. One of those days! 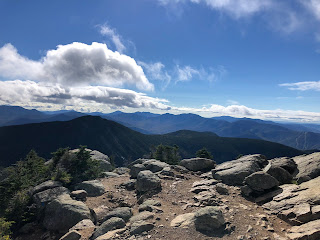 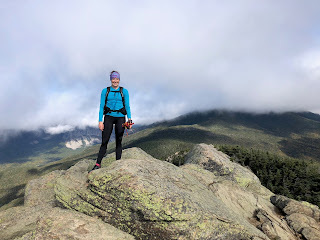 Hey we're going to go into that cloud!

I had to do handstands on top of Lafayette, because tradition, and then we left the crowds behind as we traipsed off toward Garfield. I had been feeling pretty good along the ridge, but various injuries were starting to niggle as we descended from the ridge, and I knew I'd be in for a long day. Normally I can dance down the hills, but not this day. I tried to put the pain out of my mind, because with some overuse injuries you have the luxury of knowing that you're probably not doing longterm damage, and you can just push through. But, I was certainly feeling pretty battered by the time we'd gone up and down Garfield and the following lumpy bits of trail. Galehead was a welcome site!

One of my old skiers, Hannah, is working at Galehead this season, but unfortunately was out packing food for the hut last Saturday, so our paths didn't cross. But, she left me a plate full of bread and cookies, and a cardboard Pemi Loop Queen crown, which I tried to wear for the rest of the loop. Unfortunately, cardboard isn't a great material for durability when you're wearing it on your sweaty head, but I loved the thought of it! 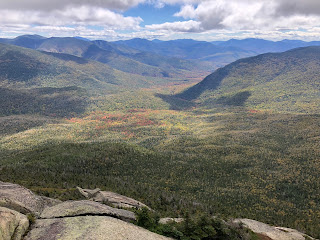 Looking down into the Pemigewasset wilderness from Garfield

A bowl of soup at the hut, and then we headed off for our last real climb of the day, up South Twin. It's tough to get moving again after sitting down, but you don't really have a choice. Unfortunately by the top of this one, my plantar fascia foot was starting to really hurt, and the subsequent ridge, which should have been awesome running, was just sort of a painful slog, trying to match pace with the boys, and not being too successful at it. I'd never been up to Mt. Bond before, and it was gorgeous. Beautiful views of the Franconia ridge to one side and the Presidentials to the other, nothing steep or difficult to traverse, just lots of nice trail. Bondcliff was as cool as everyone has always said it is; I'd like to go do that again and have a picnic up there. 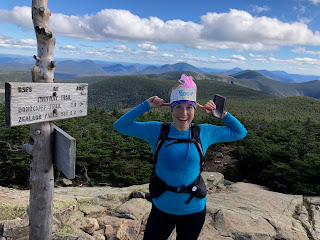 My Pemi Loop Queen crown on top of South Twin 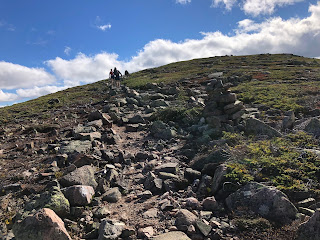 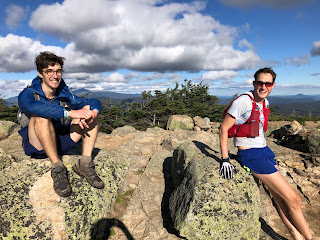 The boys on top of Bondcliff

Thus some 22-something miles into the day, we finally started downhill, and my foot was pretty upset at being asked to bear weight. We still made it down reasonably quickly, but then those final five miles of flat old railroad by the river... those were rough. I couldn't put power through either foot, and resorted to sort of hillbounding with my poles, at a struggle shuffle 13-minute mile. Oof. Takes a long time to cover flat ground when you're going that slowly, but Ari was a good friend and hung back to tell me stories. Gabriel couldn't stand the idea of that final piece of trail taking so long, and ran ahead. I can't blame him, and wished I'd been able to manage a more respectable pace, but sometimes you just gotta run what you brung. 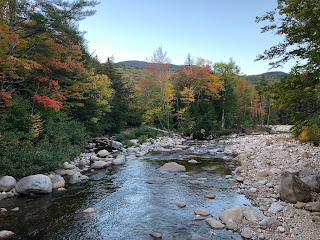 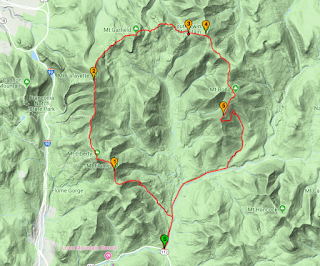 So after a very long slog, we were back to the car, some 10.5 hours after starting. 30 miles and 10,000ft of climb is a big day, no matter who you are. What a crazy awesome day. Of course I wished I could have gone faster, because that's who I am, but for now I am very satisfied having just made it around. While that may qualify as a bucket list item, I'm not writing off doing it again, on fresher legs!
Posted by Alex at 2:36 PM