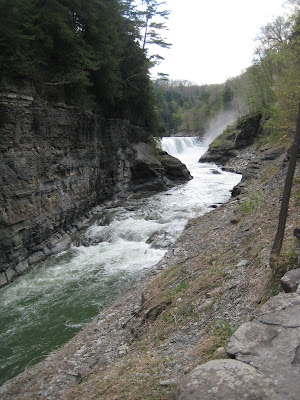 I tend to time my visits home with interesting things that are going on, in this case, a ski clinic and the first club championship meet of the Rochester Orienteering Club, down at Letchworth State Park. This was the site of the relay champs last year. Luckily it was not quite as warm this time, so I didn't overheat like last weekend. Jess came along, to the delight of some of the local orienteers, who seem to think that they've recruited a real runner. We'll see how that pans out for them... We were both running the red course, so I knew that I'd have to book it on any easy (navigationally) legs, so that lil' miss runner gal didn't catch up to me.

The first couple controls were in the fun area, a hillside with a lot of contour detail. I was trying to read ahead on the map so I could anticipate what was coming, unlike last weekend when I was sort of bumbling along, reacting rather than acting. The first seven controls were clean, although I made a 15-20s error on control 2 when I peeked up a reentrant that I knew was incorrect. Going to control eight, the map didn't seem to match up to what I was seeing, although I was just being an idiot and quickly corrected myself. This meant that I hadn't read ahead enough, though, and I didn't pause long at the control to plan a route to 9, I just started running in the right direction. At first glance it didn't look like there was anything in the way, so this seemed like an intelligent route. 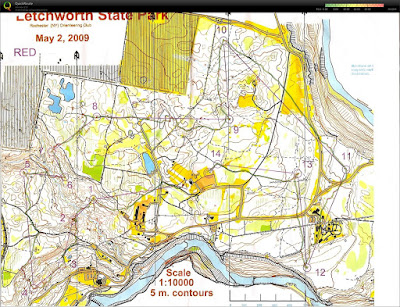 My route on the map.

Soon after crossing the road, though, I came to an uncrossable swamp. The swamp was actually crossable, so this was good, it just slowed me down a bit. It was interesting that the marsh's outline was shown on my map, but it wasn't filled in with blue lines to indicate water. Anyway, I crossed the marsh, hopping from tussock to tussock, fretting about the fact that Jess was probably running around on the trails and moving a lot faster than my hopping. So once I got across the swamp, I saw what looked like open, runnable forest ahead of me, and I quickly picked up speed. Unfortunately, this open forest was actually dead leaves lying on top of a mucky swamp pit, and I made it about three strides before I was neck deep in muck. Luckily I held onto my map as I body surfed back to drier ground...

After that, I ran cleanly, but my shoes were so filled with muck that my speed was a little less than optimal... I managed to beat the Russian dude I've never beaten before, and another guy who I normally don't beat, but only by 2 seconds. A 17 year old kid on the Junior World Champs O-team beat me by nine minutes, but I've never claimed to be faster than highschool boys. Jess managed to make enough mistakes to be well out of the running, but her non-mistake legs weren't that far from mine. All in all, it was a good race for me, mostly clean (aside from my dip into the swamp), and it was fun to run against my home club again. Results, and splits from the people who have put them online. 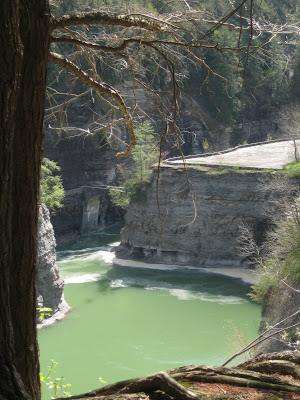 Of course we had to hike down to Lower Falls and be tourists, just because we were there. Next week: The Billygoat! 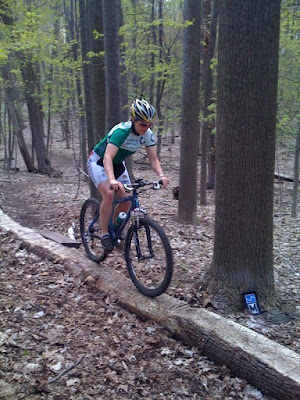 Of course I couldn't resist going back to Dryer before I left. This time with my dad, so I'd feel better about my technical skills.
Posted by Alex at 9:16 PM

Alex!
All these orienteering posts are getting boring. Can't you ride...I mean write, about cool stuff like sweet bike adventures? Or at least maybe about 3000m time trials or rollerski intervals somewhere cool or something?

Sorry Cary. Its what I've been doing. How were the gaps?

Linnea got in the car after 2 (and the easiest 2). Colin didn't ride because his knee was messed up. The rest of us went over Lincoln and App Gap,descended down to Waitsfield, and then packed it in since we all felt lousy and it had been 45F with a light rain the whole time. Disappointing, but my legs were smoked from racing hard the day before. Are you going to come out for a couple mtn bike races this summer? Will I see you at Kate's wedding?