Last Tuesday was the last official CSU park-o of the spring, at Cat Rock Park in Waltham. At least, I think its in Waltham, its sort of next to Costco. Results are up, and I did pretty well for once. Being a little on the tired side from the weekend helped me, as I couldn't outrun my brain, although a lot of the running was on trails. It seemed like all the underbrush was poison ivy, and I was trying to avoid running straight through it, although I mostly failed in that regard. The fields over by 6-7-8 were actually fields of poison ivy, which was really pleasant... at least they weren't nettles.

I started just ahead of Ian, which I knew would make things interesting, since we orienteer at about the same speed although he's a little faster on straight trails. Heading to 1, I realized that the map was not 1:5k as advertised but something closer to 1:10 or 1:15. Things seemed really small, and it took a long time to get to them. I took it pretty slow to 1 just to get my feet under me (and my brain working), and by the time I got to 2 I was in the zone, reading ahead and running as hard as my trashed legs were letting me.

I could hear Ian crashing through the woods going to 3, although I ran on the road which I think was faster, and as I scrambled up the steep little bank he was already punching. He got to 4 first, and I was able to see him punching and thus take better micro-route choices. Its always easier to run behind someone, you can sort of mentally draft. I closed the gap going to 5, again using his zigs and zags to run straighter, and I think we had pretty even splits going to 6, in the massive field of poison ivy. Ian started to pull away going to 7, he was just faster, but then he bumbled 8, and I trusted my map skills rather than chased him. I ran along the trail to 9, but then it got steep so I started walking - what can I say, I was tired. Ian passed me there, but then hesitated at the top, looking for the control, while I knew it was further along the ridge, since we hadn't crossed the stone wall yet. I was a little too far down the hill on my approach to 9, but I knew this was my chance to get away, and bolted off to 10 before Ian could see me.

I found the trail leading to 10 no problem, and ran cleanly to 11. Of course, when I left the poison ivy field, I managed to run too far down the spur to 12, not having a good attackpoint and just hoping that running faster would keep me ahead of Ian. Lost probably 20 seconds on that one, and then going up the hill to 13 I went slowly again, and Ian caught up. We were together to 14, where I took a sort of stupid route that involved going over the top of a cliff, and then he bobbled near 15 and I closed the gap again. It was a trail run to 16, and we were head to head now, it was going to be a battle. It looked like a trail run to 17, too, so I was really confused why he turned off towards the finish after 16... turns out, he was so focused on beating me, he didn't even see 17! I beat him by default =)

Fun race, it is always fun having somebody to race, bringing a whole extra dimension to this already-multi-dimensional sport. I was pleased with my concentration despite having a person to distract me - relay champs, bring it!

My map with my route is below. 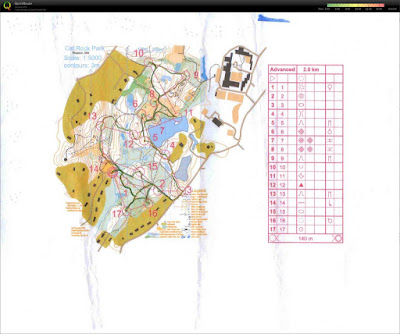