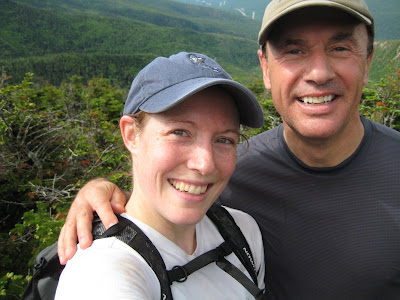 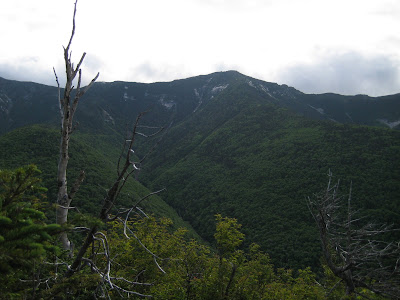 Looking at Little Haystack and Shining Rock from the Agonies 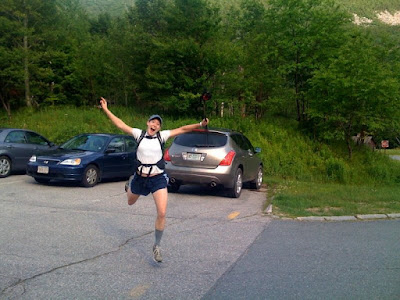 The Lafayette-Lincoln-Little Haystack ridge happens to be my mom's favorite hike in the world. Unfortunately she couldn't make it this time, so just one parental unit came to try to set a new Jospe-record for that loop. I think our previous best had been somewhere around 4 hours, maybe just over. Its 8 miles with 4200 feet of vertical, so nothing too epic, but definitely enough to make you a little sore the next day (or three). We got up entirely too early, hoping to avoid some afternoon thunder showers, and by 8am we were on the trail. Of course, five minutes into it, I started up Falling Waters trail, which is the reverse loop. We realized this and turned around, but had to re-pass a family and a guy with a big pack, so I felt pretty stupid. The feeling didn't last, though, as it was just one of those days when you're rejoicing in movement, in life, in sunshine and clouds and trees and one step after the other. We started out at an easy jog, trotting along on the flats and hiking the steeper bits. By the time we got to the agonies (so named by the hut-caretakers apparently, as its the steep part and they have to cart all sorts of crap up to Greenleaf hut), we started passing various groups of Quebecois. Not sure if they were all one group or what, but it was nicer when we had the trail to ourselves. 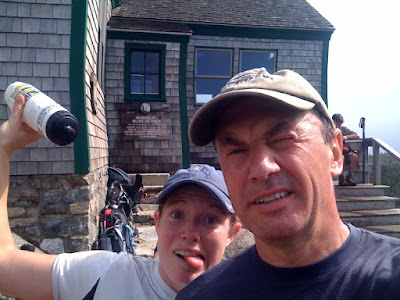 Some days, its impossible to be serious 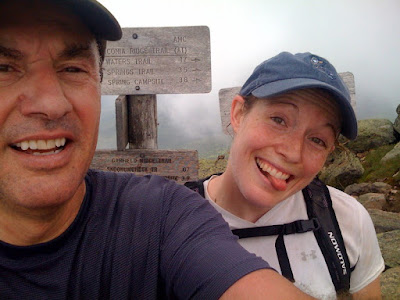 We were at the hut by 9, a three-mile jaunt, including our little "detour" up part of falling water trail. We like going up the bridle path because it means most of the ridge is downhill, which is faster and more enjoyable than the other direction. I have only hiked this ridge in the other direction once, when I was hiking with Anna and she was peak-bagging and wanted to get Liberty and Flume as well as the usual three. The trail up Flume is steep enough that you don't want to go down it - sheer rock face - hence that loop getting hiked in the "reverse" direction. Anyway, after a brief stop for water at the hut, we continued upwards, to Lafayette. 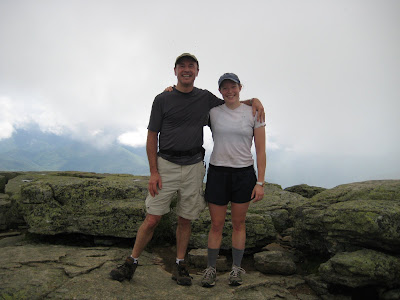 At the top of Lafayette we discovered we had cell service, so called Mama to inform her that we were at the top of her favorite mountain, and then we started jogging down the ridge. The clouds were slowly coming over the ridge, but there was no wind to speak of, and they were really stuck on one side of the ridge. It was really cool to look down the ridge and see clouds engulfing one side and sunshine on the other. 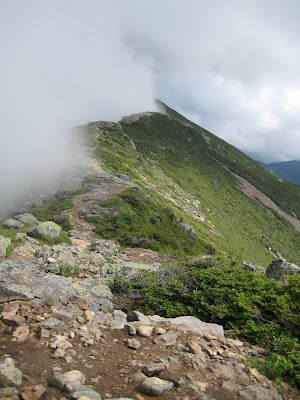 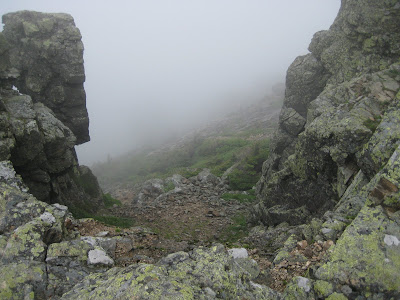 Looking into the abyss of the cloudy side 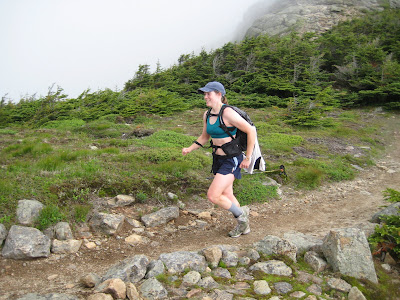 About two and a half hours after starting the hike, we were at the top of Little Haystack and about to head down. The weather was starting to look less nice, but since we were leaving the ridge, we figured it didn't matter. There were a lot of people still heading up, though, so I hope they all made it over with no lightning or other bad things happening. I tend to descend pretty slowly, and I was still worried about my knee, which I tested with a two-mile run on Monday. If I can run two flat miles, I'm fine for an 8-mile speed-hike, right? Anyway, the head Jospe mountain goat was willing to go slowly, so we carefully stepped our way down, and then jogged through the flats at the end. It was sunny at the bottom, so we did the super-PRO thing and sat in the frigid stream afterwards to ice our legs. At least, I did. 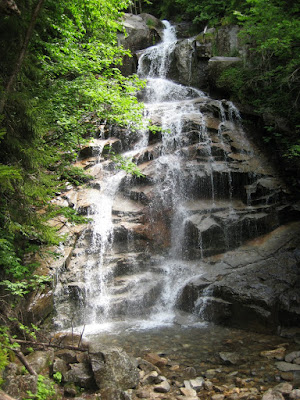 In the end, 3:45, and since we're not counting my ten-minute detour, its actually 3:35. And, I never stopped the watch for our multiple photo-op stops. Definitely a new record =) 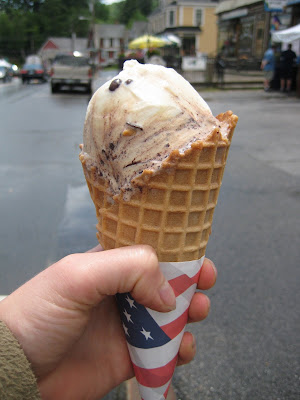 Most good days in the mountains ends with something like this...
Posted by Alex at 8:56 AM

I think I have seen you biking maybe 5 or 6 times in the last two weeks. But you're going so fast I never have time to say hi. Are you going to do any more mtn bike races this summer? I highly recommend Mt Snow on July 26th...I'll be there!

The one time I saw you biking, you refused to acknowledge me. Its probably because I was wearing a skirt on a beater bike, and you don't acknowledge people unless they're in spandex...

Might do Pats Peak XC... I don't really need marathon-length race efforts in the summer, being focused on skiing and all =)