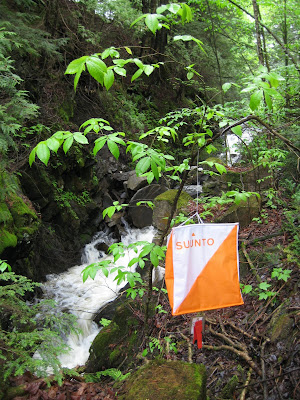 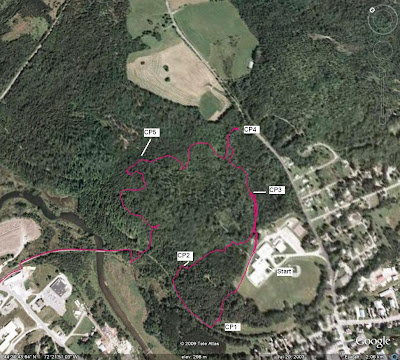 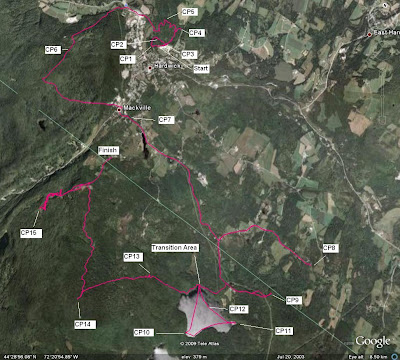 A couple weeks ago, Adrian Owens, one of the fast guys on the US Ski-o team, emailed me with a possibility to do a small adventure race. It was a short one, so I figured, why not. This race was supposed to be a fundraiser for the Hazen Union school's outing club, but because of the rain in the preceding days, a couple teams bailed, and so it was a really small turnout. I didn't really know what to expect, and apparently, adventure race organizers like to keep things pretty secretive. I showed up to Hardwick, met up with Adrian, got our stuff ready to go, and then Marc, the organizer, went over the rules. The first three controls were to be gotten in any order, on foot. Then 4-9 would be gotten by bike, in order. Then we'd come into the transition area, and pick up controls 10-12 in any order by canoe. Then controls 13-15 and to the finish was on foot. Sounded simple enough... 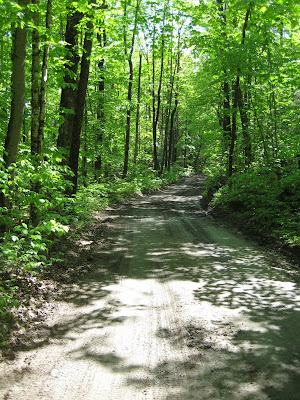 
The first running bit was on the cross country trails at the Hazen Union school (where we started), and we jogged along nabbing controls at an easy pace. We came into the transition zone well in front, quickly changed to bike shoes (Adrian rides with toe straps when he does these races, so that he doesn't have to change shoes as often), and set off to get the next set of controls. The first couple flags were still in that trail system, and the sugaring lines were still up, which meant we almost got decapitated coming down one hill. Oops. After that, we were mostly on dirt roads and atv trails, which was certainly muddy. I didn't bring sunglasses, since I don't like running in them, and descending one of the fast atv mudpits I was screaming "MY EYES!!!" Hard to see, for sure. The nice thing about these races, is that apparently most of the people who do them are sort of weekend warriors, Adrian said there had never been a race where he couldn't just outrun the competition. We weren't going fast, I think on the bike section we averaged less than 10 mph (there were some big hills...), but we were putting massive amounts of time on the other people. Of course, some of the riding was actually walking with the bikes looking for the flags. 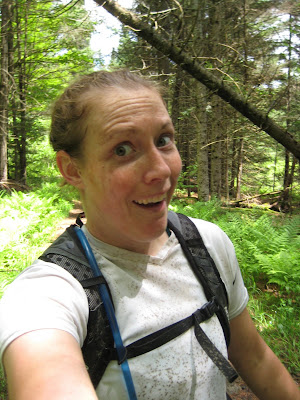 What exactly have I gotten myself into??


We came into the transition area and got in the canoe. Adrian thought it would be better for me to be in the back, but I haven't paddled a canoe in a couple years, and it showed. We went pretty straight, mostly, and made good time through the water. We were still the only team to have gone through the transition area as we took off on the last running bit. We set a compass bearing to just go straight to 13, as it was in a saddle and those can be tricky, and that worked out well. It was fun doing this with Adrian, I was expecting a lot more detail from the map, but he knew sort of where to look for these things and was really good at navigating on the USGS topo map. We straight-lined to 14, also, just hiking up the hills, keeping things really low intensity. 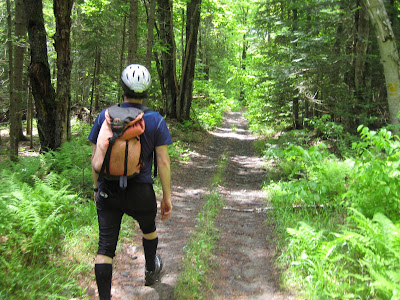 
We thought 15 would be a real no-brainer, go down the trail and then follow the river to the flag. We did that, but there was no flag. We relocated (keep in mind you've got two world-champs-level orienteers, here), checked out some possible parallel errors, and concluded that the checkpoint really should have been where we were. We went back and looked around some more, still no flag. After wasting about an hour hunting and pecking for the flag, we called it a day and jogged down to the finish. The organizer described getting to the control, and we had followed that exactly until the fork in the trail, when he said you had to go up and over a hill to get to the beaver pond, and we had stayed low. Because, water isn't going to go up and over a hill. I think he put the flag in the wrong spot. 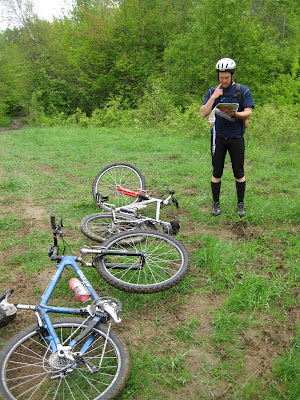 Hum. where are we now?

Luckily, being a small, fundraiser-type race, there weren't any prizes or anything we missed out on. We actually ended up leaving before the other people even finished... Maybe not the most sportsman-like behavior, but I had to get back down to Weston in time for Ed's cousin's birthday party...
Posted by Alex at 9:24 AM